Skip to main content
The story you are reading was published on Thursday October 13, 2016. To read more recent stories click here. 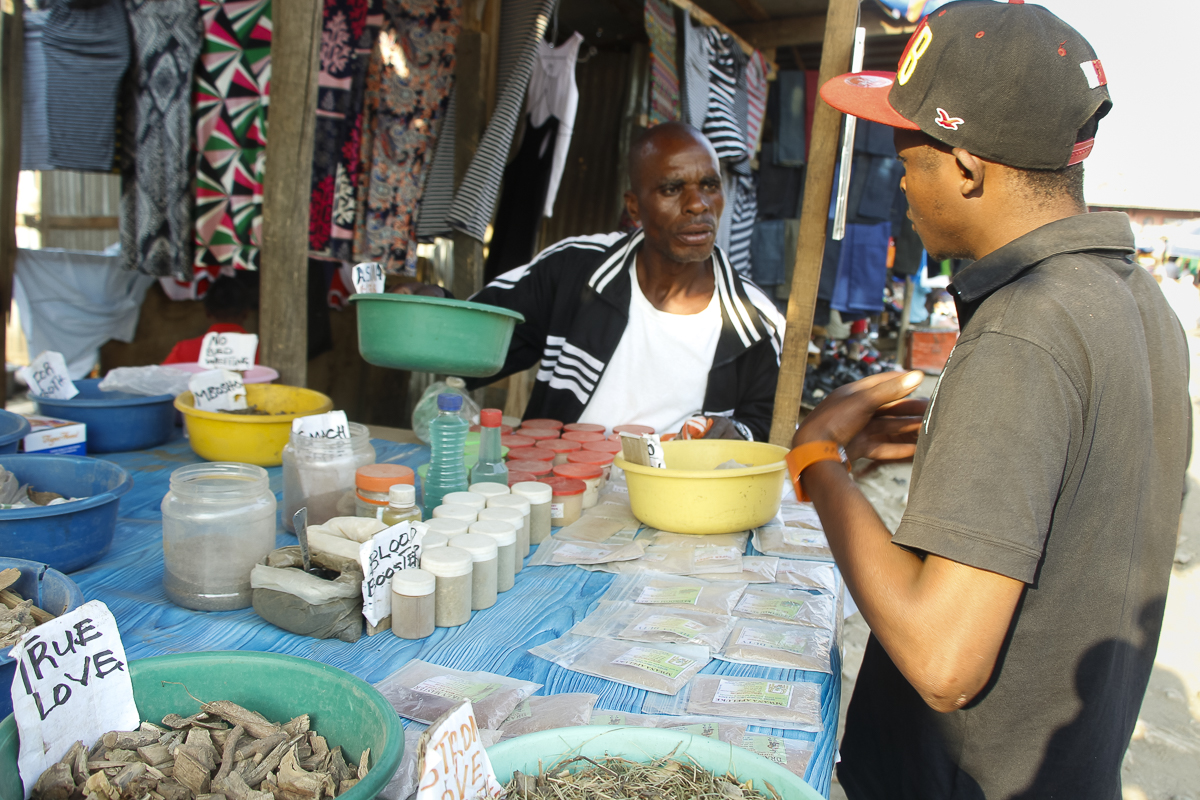 There’s no explanation needed for the intended use of the herbs sold at stalls in one section of Lusaka’s Kamwala trading area.

“Every man wants to have good sex and please his woman,” says Sam Zimba, an herbalist who owns one of the stalls. “That is our business, to make sure people are having good sex.”

“Most of my clients are men that have libido problems,” he says. “Others are OK but just want to go an extra mile in enjoying the act.”

And some clients are women who buy the herbs to secretly add them to their husbands’ food, to boost their sex drive, Zimba says.

If the herbs are taken twice a day for seven days, they’re effective for six months, he says.

Most of my clients are men that have libido problems. Others are OK but just want to go an extra mile in enjoying the act. Sam Zimba, an herbalist who sells libido boosters

The Traditional Health Practitioners’ Association of Zambia warns that people claiming to be herbalists have infiltrated the local market and are providing dangerous substances to unsuspecting people. That organization is lobbying Zambia’s Parliament to create a regulatory system for traditional healers and practitioners, to curb activities of people who aren’t real herbalists.

The herbal stalls at the market are popular, and they’re frequented by people who say the treatments work.

Isaac Shawa says he once suffered from erectile dysfunction.

“But from the time I started using these herbs, I am so strong,” he says.

He says he never sought any formal medical attention for the problem because he was convinced that herbs would cure him.

Using such herbs can have serious consequences, says Dr. Bassem Yani, a urologist at the University Teaching Hospital, Zambia’s largest hospital. He warns against taking any libido boosters without a prescription.

About 50 percent of the patients who seek treatment for erectile dysfunction say they’ve taken herbs in an effort to cure the problem, Yani says. In some cases, men have had prolonged erections because of the herbs they’ve taken.

“This is dangerous,” he says. “It could damage their penis tissues, and if the tissues are damaged, one may never have an erection again.”

The side effects of the herbs sold to treat erectile dysfunction aren’t known, Yani says.

“We can’t say they’re safe, because there is no research,” he says.

Rodwell Vongo, president of the Traditional Health Practitioners’ Association of Zambia, says the herbs are safe.

But, he adds, there can be adverse side effects if the herbs are abused.

“Any medicine can be dangerous if you abuse it,” he says. “People get excited and they tend to overdose themselves.”

When it comes to sex, he says, people want to enjoy themselves “more than what is humanly possible,” so they take more herbs than they should, he says.

And, he says, some people who claim to be herbalists sell concoctions that aren’t safe. Herbal remedies should be reviewed to ensure that they’re legitimate, he says, but herbalists don’t have the same government support that other doctors and health care practitioners have.

Vongo says his organization is pushing a Traditional Health Practitioners’ Act to regulate traditional medicines, including ensuring that research is done on their contents, and curb the sale of fake products.

Yani says people who believe they might have erectile dysfunction should seek professional medical help.

“Causes of erectile dysfunctional are numerous,” he says. “[For some,] it is because they are depressed or stressed, for others it could be a health condition that they have that could cause that, or the medication they are taking.”

Even so, some men who take herbal libido boosters say the treatments are highly effective.

Richard, who asked that his last name not be published to protect his privacy, says he’s taken herbs to improve his libido for two years. He says his stamina improved significantly once he started taking them.

“If there is one thing that depresses a man, it is failing to satisfy a woman,” he says. “No man would confidently move about if they are unable to perform as expected in bed.”

Some interviews were translated from Nyanja.