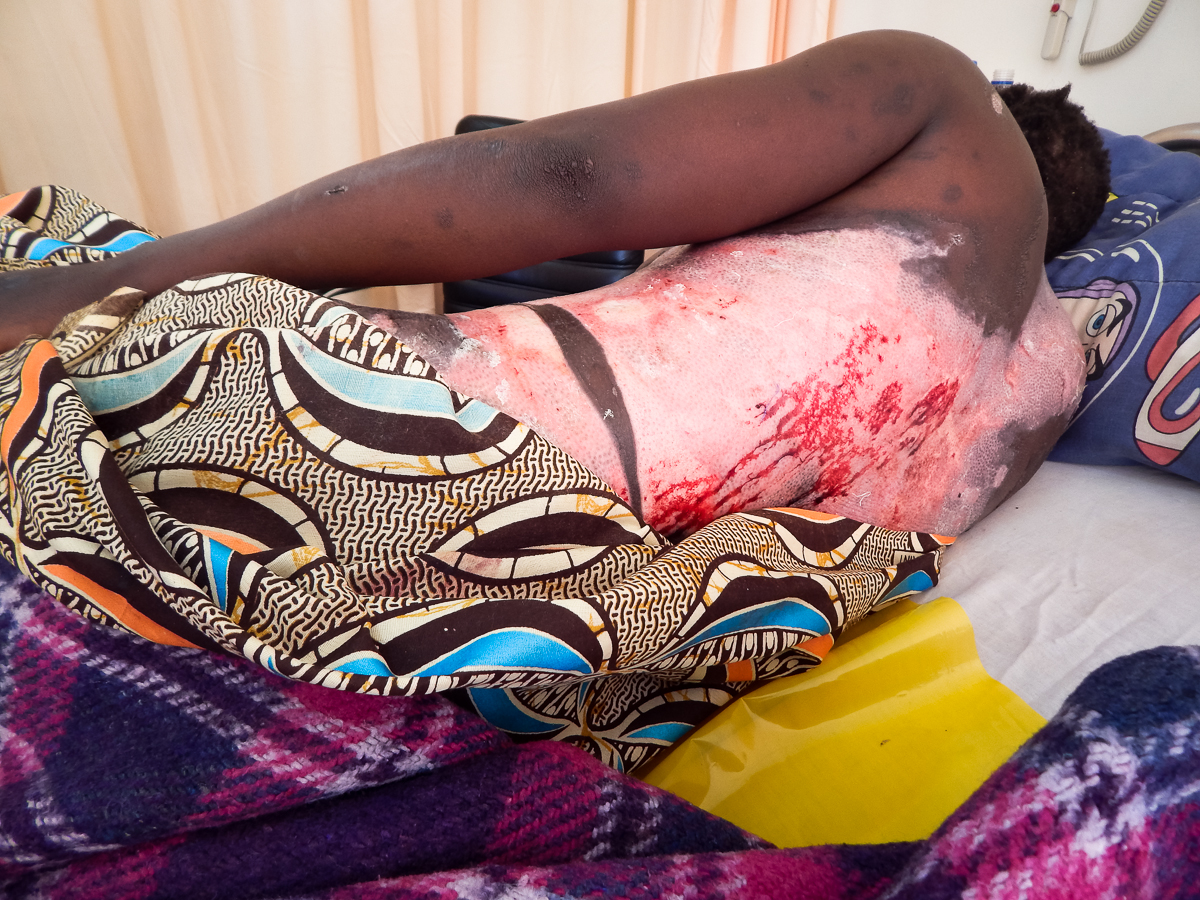 LUSAKA, ZAMBIA — Mary Nanyangwe lies on her bed at Levy Mwanawasa General Hospital in deep pain, unable to turn or sit because of burns to her back and stomach.

One day last year, Nanyangwe’s husband, suspecting that she was cheating on him with his brother, poured boiling water on her midriff.

That wasn’t the first time he had attacked her, the 31-year-old mother of three says. He has assaulted her repeatedly in their 14-year marriage.

But as soon as she got out of the hospital, Nanyangwe pleaded with police and the women’s rights organizations pushing for her husband’s prosecution to withdraw the case against him.

A maid earning a meager monthly salary of 400 to 600 kwacha ($56 to $84) in Avondale, a suburban area of Lusaka, the nation’s capital, Nanyangwe says she could not afford to raise her children alone if her husband were sentenced to prison. Her husband, a gardener, works only occasionally, and the family needs both incomes to survive, she says.

“What he did to me was cruel, but he is still my husband,” she says. “Taking him to jail won’t help matters. He might come back worse than he went.”

She adds that Jesus admonishes his followers to forgive those who harm them not seven times but seventy times seven.

Reports of gender-based violence are on the rise in Zambia, but prosecutions are down. A key reason, prosecutors and women’s rights advocates say, is that many Zambian women withdraw their cases. They say the trend emboldens men to batter their wives with impunity.

Some women acknowledge they decline to press charges to protect their family’s financial future.

To empower all Zambian women, the government is translating a recently enacted law against gender-based violence into seven local languages.

Reported cases of gender-based violence in Zambia shot up roughly 80 percent in four years, from just under 8,500 cases in 2010 to about 15,000 in 2014, according to the National Gender Based Violence Crime Statistics for 2014.

In 2011, Zambia enacted the Anti-Gender Based Violence Act to protect people and punish perpetrators. The act provides for the creation of support units for peopel who experience such violence in police stations countrywide. The units are to serve as initial points of contact for people who suffer gender-based violence, says Tresford Kasale, national coordinator of the units.

The units, which offer legal support and counseling, have been established in all 10 provinces of the country, Kasale says.

The law requires police to promptly respond requests for assistance, protect her, and help her obtain medical treatment. The act also authorizes police to arrest domestic violence suspects without warrants.

The law provides for the creation of shelters all over Zambia, though it does not spell out how many shelters are to be built.

While some shelters have been built, few are fully operational yet.

Despite all the supports provided by the law, most abused Zambian women choose not to press charges.

Out of the 15,153 gender violence cases reported in the country last year, only 3,380 were adjudicated; 5,798 cases were withdrawn; and 5,975 are pending at police stations, according to the national statistics.

People who experience such violence often cite financial dependence as the main reason they are unwilling to press charges against their husbands.

In Zambia, women make up just 48 percent of the labor force, according to the Preliminary Results of the 2012 Labor Force Survey.

Female workers also earn less than their male counterparts, according to mywage.com statistics for Zambia.

Current partners commit 70 percent of domestic abuse, according to the Central Statistical Office of Zambia.

Ruth Mwale says she would never allow her husband to go to jail – no matter how violent he gets. Her family is too financially dependent on him.

In December 2014, police arrested Mwale’s husband for breaking her arm in a domestic dispute. But she asked the police to drop the case against him.

Zambian law does allow for prosecution contrary to the wishes of people who experience the violence, but prosecutors rarely pursue such cases, Kasale says.

Mwale, a secretary, says she could not afford to provide for her two children alone.

Further, her family would suffer emotionally if he went to jail, she says.

“For me it was a matter of, one, not managing to look after the children; and secondly, I felt I had taught him a lesson by merely letting him spend a few nights in the police cells,” she says. “It was not necessary to take the case all the way because a lot was at stake, including the emotional health of the children and his family.”

Traditional marriage counselors – community elders who draw upon traditional teachings to help couples resolve conflicts – do not advocate legal action as a solution to gender-based violence.

“The issue of violence among couples is a difficult one,” says Pricilla Mukumbwa, 62, a traditional marriage counselor in Lusaka. “I would sit with the couple and hear what is causing the violence and find an amicable solution to the problem. I would not encourage couples to involve the police unless things get out of hand – and even then maybe just to teach the perpetrator a lesson.”

“How would you feel as a woman if you sent a man to prison and the children were left suffering?” she asks.

Still, most of the women he counsels later drop their cases, saying they have forgiven their abusers, Kasale says.

“Most women refuse to be witnesses in court once they realize how serious the matter is,” Kasale says.

Prosecution seldom succeeds without a complainant, Kasale says. In cases involving grievous harm, however, police can proceed to court.

“Like in the case of Nanyangwe, there is enough evidence,” he says. “The media reported the matter, pictures are there to show how grievous the assault was, and, with such, we proceed to court even without the victim.”

Nanyangwe’s husband is free on bond pending resolution of the case.

The Young Women’s Christian Association of Zambia, YWCA, is one of the women’s rights organizations that pushed for the prosecution of Nanyangwe’s husband.

Nanyangwe’s unwillingness to testify against her husband was a big setback to the case, says YWCA Zambia Executive Director Patricia Ndhlovu.

“We were shocked when she said she did not want the case to go to court,” Ndhlovu says. “She cried, pleading with us to convince the police to withdraw the case.”

The YWCA Zambia also provides temporary shelter. And to help women attain financial independence, it trains them in business management and links them up with lending institutions.

Unfortunately, the organization’s efforts to curb domestic abuse have been hampered by women’s tendency to withdraw the cases before they go to court, Ndhlovu says.

Women drop their cases because they depend on their abusers financially, she says.

“It is issues of thinking that if my husband is arrested and jailed, he is the breadwinner, who will support me and my children?” she says. “They forget to think that if he is not made to account for his action, they may die and may not be there for the children they say they want to raise.”

The culture is also to blame for domestic violence in Zambia, Ndhlovu says. Women are taught to endure in marriage no matter the circumstances.

“The culture of silence is also killing the women,” she says. “They protect their violent husbands in the name of marriage.”

In 2012, the most recent year for which data are available, 40 percent of abused women in urban areas say they have never told anyone of the abuse, while 47 percent say they have sought help from some source, the Central Statistical Office of Zambia reported.

In 2014, 57 homicides in Zambia were classified as acts of gender-based violence. Of those, 41 of the people who died were women, 11 were men, three were girls and two were boys.

Although the Anti-Gender Based Violence Act is silent on the withdrawal of court cases, it will help curb gender-based violence when it is better understood, Ndhlovu says.

“The act is good because it provides a platform from where to start in terms of curbing GBV,” she says.

However, the government has not implemented it effectively, she says. For example, the support units formed under the act are understaffed and underfunded.

In some rural areas, the lack of criminal courts also hampers implementation of the act, she says.

Zambian Vice President Inonge Wina, the nation’s former minister of gender and child development, acknowledges that implementation of the act has been slow but says the government has achieved some key milestones, including building shelters. However, until the government shelters are fully operational, the support units are referring people to YWCA shelters, she says.

It’s hard to know how many women use the services daily, as many come and go every day, Wina says.

In accordance with the act, Wina says, the government also has provided financial assistance to some people, Wina says. Financial assistance can come in several forms, including small loans and referrals to lending organizations that prioritize people who experienced gender-based violence. Women who want to start businesses are referred to financial institutions that can provide startup capital.

“The Anti-Gender Based Violence Act of 2011 has provided for protection and support to these survivors,” she says. “This economic dependence on men is what is killing most women.”

In communities that are far from police stations, the government has trained traditional leaders to handle cases of gender-based violence.

“If it is in the village and there is no police post nearby, I urge the women to take these cases to the village headman,” Wina says. “We have trained most of these headmen to handle such cases.”

If there is a police post nearby, people should rush to it, she adds.

At least 1,000 of Zambia’s more than 2,000 headmen have been trained to handle gender-based violence, according to the Central Statistical Office of Zambia.

Getting all the support units fully staffed is taking some time, Wina says.

“There is a huge demand for the victim support units countrywide,” she says. “Hence some stations just have one or two officers. But we are already working on reinforcing the units both in terms of human resource and finances.”

To ensure that all Zambian women understand their rights, the government is translating the Anti-Gender Based Violence Act into the seven major local languages – Bemba, Nyanja, Lozi, Tonga, Luvale, Lunda and Kaonde. The project started in 2014.

“We want every woman, whether educated or not, to understand the act,” she says. “To know the steps to take when faced with violence.”

The government urges all Zambians to help curb gender-based violence.

“We need more sensitization on the dangers of gender-based violence for both men and women, because if this woman does not report the case, next time it will be death,” Wina says. “So let us allow the law to take its course. Let us not tamper with judgment. Once one reports to the police and action is taken, other perpetrators will fear abusing women.”

Meanwhile, many people who are abused say their abusers don’t need imprisonment.

“I think my husband just needs a lot of counseling,” Nanyangwe says.

Mwale adds, “They need a little punishment, like making him spend some time in police cells. I’m sure that is enough punishment.”

Further, empowering women economically will minimize the power their husbands wield, they say.

“Men take advantage of us women because they know that as long as we cannot fend for ourselves, we cannot go anywhere,” Nanyangwe says.