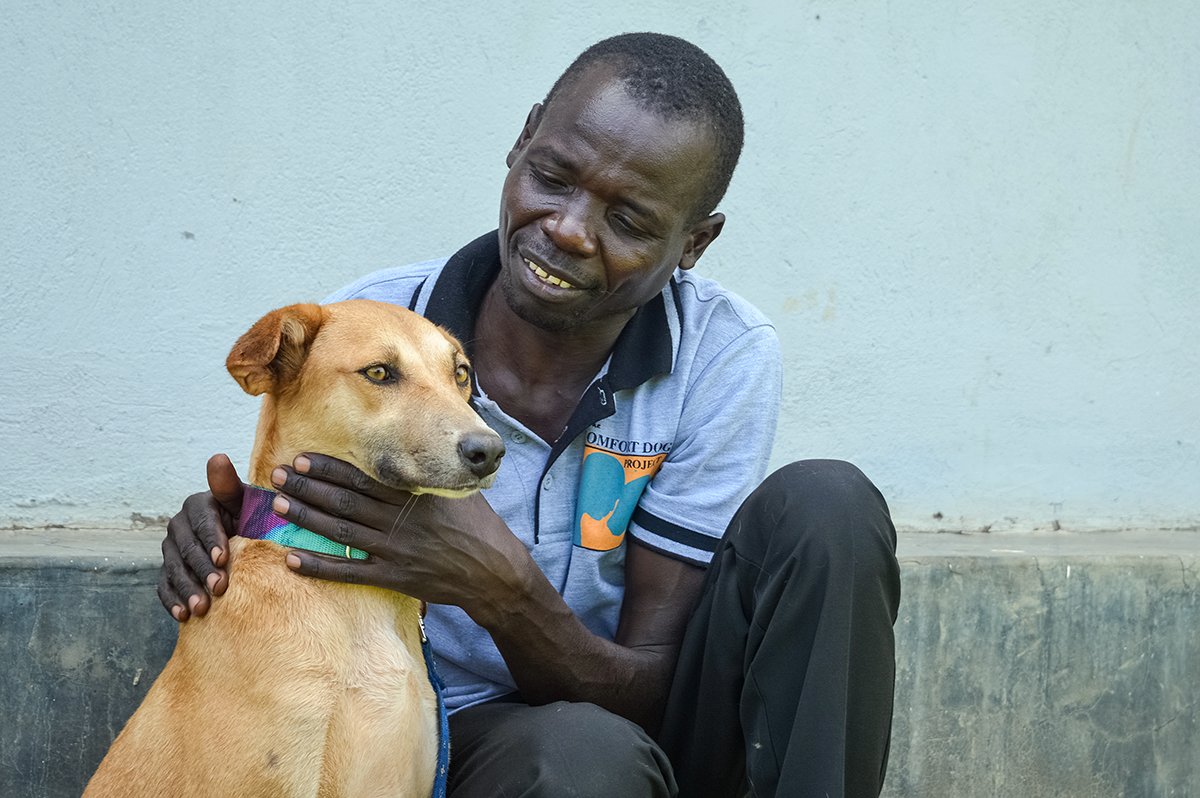 Lokoroma was graceful and friendly, just how Akumu would describe herself before 1997, when the Lord’s Resistance Army, an armed group notorious for fighting against President Yoweri Museveni’s government, took Akumu and her two brothers from their home in the rural town of Gulu. She was 12.

A year in the thick, tangled forests of northern Uganda left Akumu with the petrifying memory of her brothers being murdered and very little to look forward to when she was reunited with her parents in 1999, she says.

At home, Akumu kept to herself, skipped meals and barely spoke about her time in captivity – until Lokoroma arrived in 2014. The therapy dog showed Akumu more empathy than her community members ever did, she says.

“I have now forgotten what I have been through,” Akumu says with a smile, reaching for Lokoroma’s paw. 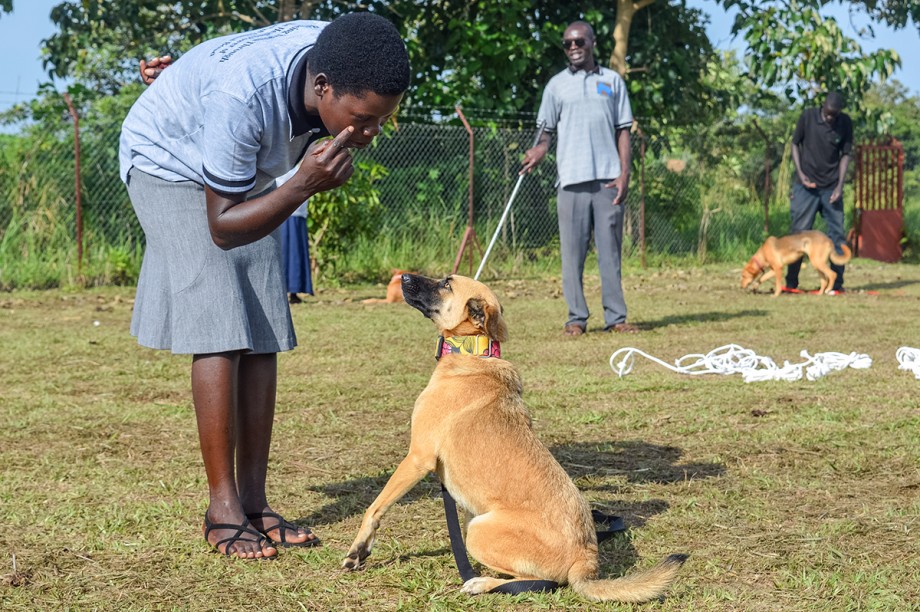 In northern Uganda, a region long plagued with insecurity, animal-assisted therapy is bringing comfort and companionship to those in need. The Comfort Dog Project pairs military veterans and community members affected by years of war with therapy dogs.

The Lord’s Resistance Army more commonly known as the LRA, originated in northern Uganda in the 1980s. Under the leadership of Joseph Kony, one of the region’s most wanted warlords, the group looted villages in South Sudan, the Central African Republic and the Democratic Republic of Congo, capturing the youngest residents and displacing thousands.

In 2006, the war between the armed group and the government ended. Thanks to Uganda’s military, U.S. troops and the African Union’s armed forces, Kony’s LRA went from thousands of members to hundreds. The remaining members fled Uganda’s northernmost communities for South Sudan and the Central African Republic.

Between the mid-1990s and 2006, the LRA kidnapped at least 66,000 Ugandans between the ages of 14 and 30, according to the Survey for War Affected Youth, a research program on humanitarian aid. Young boys were forced to fight and told to commit heinous crimes if they wanted to stay alive, while girls were forced into sex slavery.

Many of those who were abducted and escaped still experience fear, rage and depression. 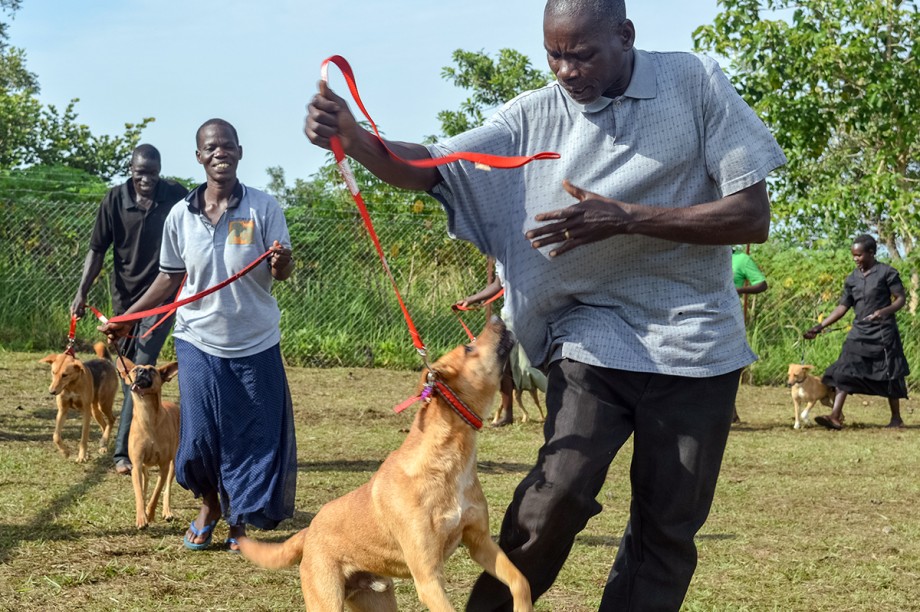 Okello and Sarah Schmidt, a project coordinator for the nonprofit, have been training stray dogs to become companions to Akumu and others.

“Most of the dogs are rejects and traumatized dogs with no owners,” Okello says.

The nonprofit also offers counseling to those who don’t receive therapy dogs.

Okello and Schmidt identify a minimum of eight people who need counseling or therapy dogs, every five months. To date, 500 people in 10 villages across the region have participated in counseling sessions, and 36 have become therapy-dog owners, says Okello, who was affected by the fighting between the LRA and the government as a young boy.

Okello was blinded after a land mine exploded in Pakuma, a village in Uganda’s Kitgum district. He lost all confidence until he found two stray dogs on his secondary school campus who helped him move around, he says.

“One would lead the way, and another would follow behind,” he says. “The dogs did this without training.”

Akumu was one of the first recipients of a therapy dog, whom Okello and Schmidt trained for five months. Left by LRA fighters to die on a trail after contracting cholera, Akumu began a daring hike to the town where she grew up, hoping she wouldn’t run into the men who abducted her and killed her brothers. Miles into her journey, she was rescued by government soldiers.

Entering Gulu was tough. Some welcomed Akumu; others called her a murderer. She named her therapy dog Lokoroma in response to the negative reactions. In Acholi, the local language she speaks, Lokoroma means “I’m tired of gossip,” says Akumu. Now, to give back to her community, Akumu helps Okello and Schmidt train other therapy dogs. 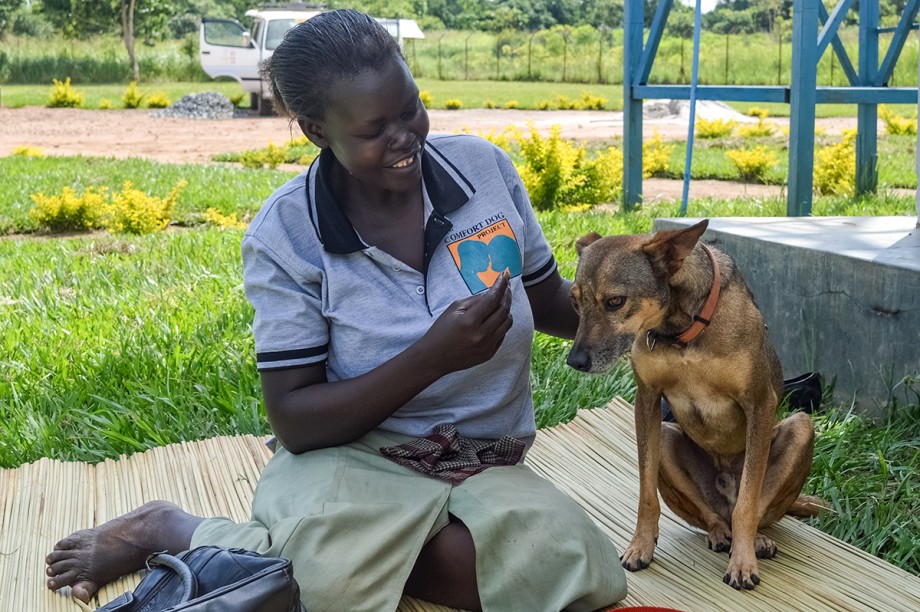 Lucy Adoch, who was kidnapped by the Lord’s Resistance Army in 1993, says her therapy dog Sadik has helped her heal from trauma.

Lucy Adoch also received her therapy dog in 2014. Kidnapped by the LRA at 13, Adoch spent five years on the front lines of the war. She was rescued in a government ambush in 1998.

“I was given a gun and told to fight,” Adoch says, adding that she endured harrowing flashbacks of combat even after the LRA left Uganda. But with Sadik, her therapy dog, Adoch says life has become peaceful.

Now a tailor and 38-year-old mother of three, she says her children enjoy spending time with her dog just as much as she does.

“My dog is my friend,” Adoch says. “I tell her whatever is disturbing my mind. People in my community know that when they see Sadik, I am around somewhere.”

Correction: An earlier version of the story misidentified the names of two photographed subjects. Global Press Journal regrets this error.