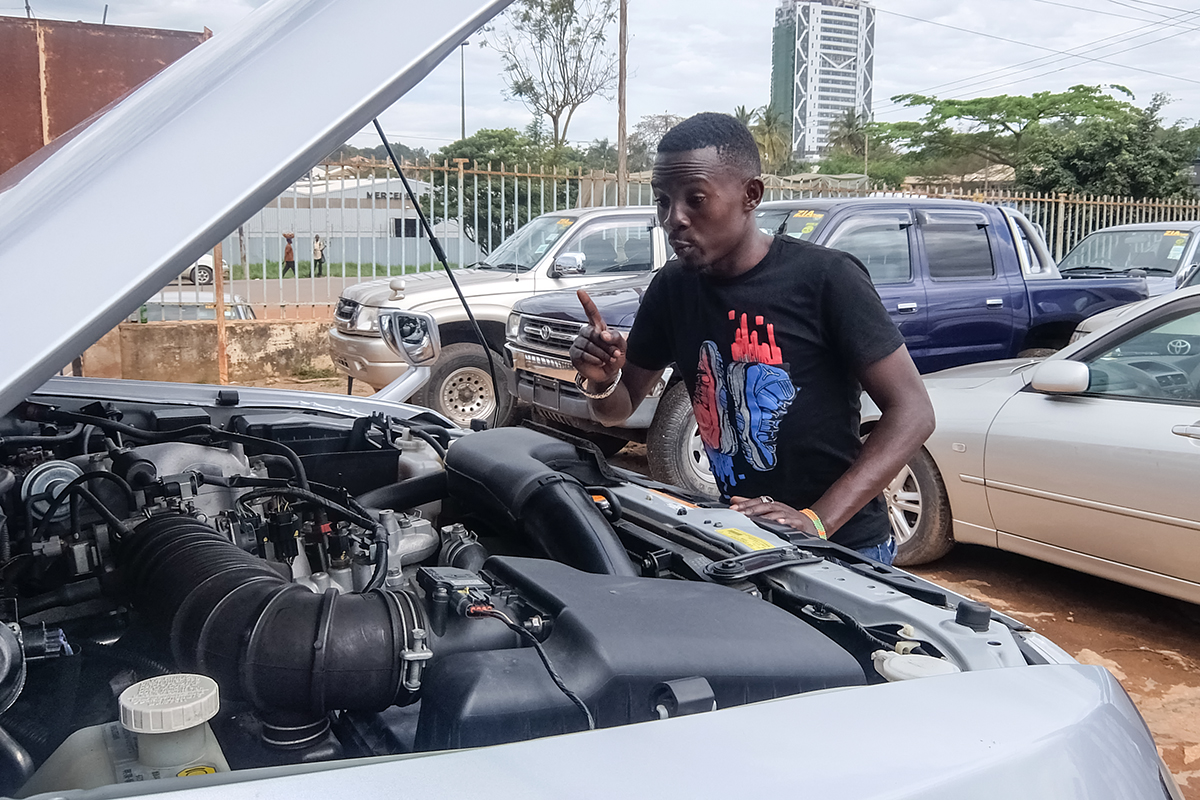 KAMPALA, UGANDA — Rashid Ssebulime carefully inspects a car at a dealership in Bugolobi, a suburb of Kampala, Uganda’s capital and largest city. Ssebulime wants to buy a secondhand car that Toyota produced in 2003.

It’s common to see old-model cars on the streets of Kampala, he says, because they are affordable. But Ssebulime is worried that a recent ban will make it difficult for small-businesspeople like him to own a car at all. In June, lawmakers made it illegal to import cars that are 15 years or older from the date of manufacture. Ssebulime says the government’s decision is impractical.

Road safety is a rising concern among Ugandans, because the number of traffic fatalities has increased sevenfold in the past 25 years. Advocates say the ban will lead to safer roads while keeping air pollution at a minimum. But critics argue otherwise. Getting rid of the cheap, old cars limits mobility and business, they say.

There is no public transportation system in Kampala. Most residents rely on crowded and dangerous ground transport for day-to-day movement.

In its annual sector performance report for 2016-17, the Ministry of Works and Transport recorded 14,474 road accidents by the end of 2016. This number was down from 18,495 in 2015. But the country still has one of the highest rates of car crashes in sub-Saharan Africa, and officials are working to change that.

Cars account for $131 million worth of imports, making them one of the top five products entering the country, according to the Observatory of Economic Complexity at the Massachusetts Institute of Technology. Over 90 percent of imported vehicles are previously owned, and many come from Japan.

The Uganda National Bureau of Standards (UNBS) is responsible for inspecting the cars when they are first imported, to ensure that the tires, brakes and lights are in good condition; that the mileage is genuine; and that the vehicles are environmentally safe, says Ahmed Shafique, general manager at Tokyo Auto Ltd., a car import company and dealership in Kampala.

But experts from the Global Road Safety Partnership, an international organization, say vehicles are not inspected on a regular basis. Without these routine checks and servicing, there is a high risk of malfunctioning engines and other faulty parts, as well as toxic emissions.

A 2015 study published in the International Journal of Environmental Research and Public Health reveals that air-pollutant concentrations in Kampala are high and dangerous to residents.

More than 90 percent of imported vehicles in Uganda are secondhand.

Geoffrey Kamese, a senior program officer at the National Association of Professional Environmentalists, says banning the import of old cars will help protect the environment, which is another one of the government’s goals.

“It’s a good gesture to address pollution from obsolete cars,” he says.

But Shafique, who imports approximately 500 cars each year, questions whether the ban will help to lower carbon emissions.

“The cars we import are certified by UNBS, so they have no problem,” he says. “They should concentrate on cars on the road which are in worse condition. The cars are not properly maintained, and they bring more smoke.”

At Shafique’s dealership, cars that are 15 years and older are the best-sellers. Since very few people have enough money to buy newer cars, Shafique says, business is slowing down. Ugandans will have a hard time getting around, he adds.

“The reason I drive my car from home to work every day is because there is no well-timed transport system,” he explains. “They should first work on roads; otherwise, even if we import only new cars, they will be in bad condition after about four years.”