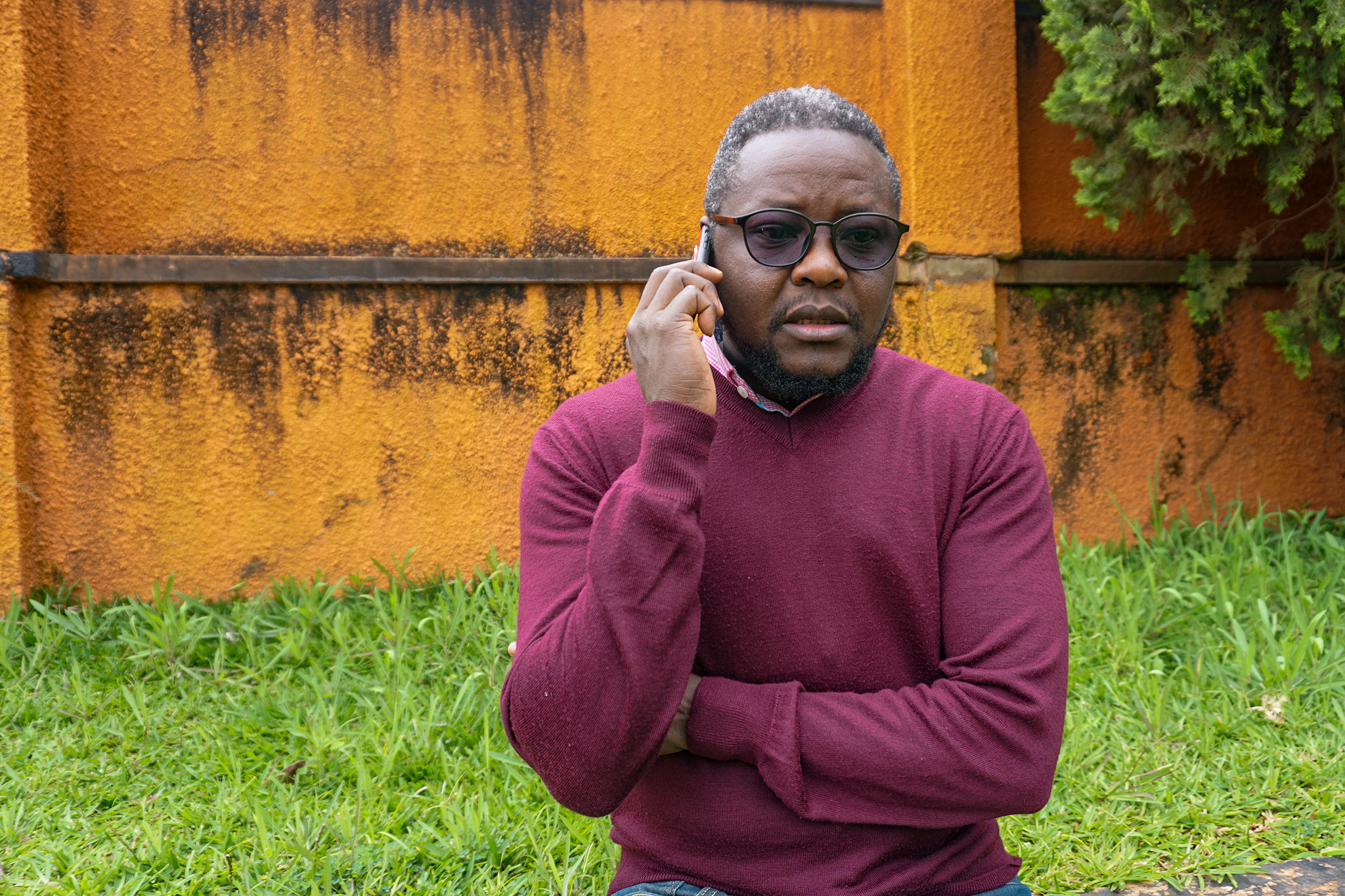 KAMPALA, UGANDA — When Lucia, a lawyer, and Asia, the owner of a clothing shop, met in 2013 at a secret gay bar in Kampala, Uganda’s capital, they became immediate friends. Two years later they were romantic partners.

Soon, the women moved in together and started talking about having a family.

“Since our friendship days, we had always talked about having our own families, even though we didn’t know we would be together then. But in 2015, we were a couple and wanted to adopt,” says Lucia. Both women requested that only their first names be used for this article for fear of victimization or arrest.

But one thing stood in their way of adoption: No Ugandan orphanage would knowingly allow a member of the Kuchu community — the local term for sexual minorities — to adopt a child.

Homosexuality is illegal in Uganda, punishable by up to life imprisonment. The government has stopped gay pride parades and raided bars that were seen as Kuchu friendly. Beyond the law, homophobic attitudes are common among many Ugandans, and attacks on members of the Kuchu community are often reported in the press.

The first time Lucia and Asia attempted to adopt a child was in 2016, when they approached an orphanage in Kampala.

“At first, the manager of the orphanage welcomed us: two young women, well dressed. She smiled and thanked us for wanting to adopt a Ugandan child,” Lucia says.

“‘Which one of you wants to adopt, or you both want to adopt?’” Lucia says the woman asked.

“There was a sparkle in her eyes, which immediately disappeared when I said we were a lesbian couple,” says Lucia.

Despite the homophobia they knew they would face, Lucia and Asia wanted to tell the orphanage the truth about their sexuality and why they were adopting.

“We wanted to be honest because we value honesty,” Lucia says, reaching out to rub Asia’s back as the latter nods in agreement.

Lucia says the manager was quiet for a few moments before excusing herself, saying she needed to go consult with someone. She returned to the office a few minutes later with a man who identified himself as a pastor and head of the church that runs the orphanage.

“The pastor thanked us for our interest in wanting to help a disadvantaged child but said he couldn’t allow us to do so because the Lord Christ wouldn’t be happy with him letting an innocent child be raised by people in a relationship the Bible condemns,” Lucia says.

Under Ugandan law, adoptive parents must be Ugandan citizens, 25 or older, at least 21 years older than the child, in good physical and mental health, and must have fostered the child for at least 36 months with the supervision of a probation officer to complete the adoption process. Prospective single parents are allowed to adopt but only a child of the same sex. The law does not explicitly prohibit Kuchu people from adopting children.

But even without a legal prohibition, homophobic sentiments in the country make it difficult for Kuchu people to adopt children. Some find other ways, such as adopting as single parents but raising the children with their romantic partners. Others simply give up.

The Ugandan Constitution guarantees the right of every person in the country to marry and create a family. But section 145 of the Penal Code Act prohibits homosexual acts as “unnatural offenses,” which are punishable with up to life imprisonment.

The Anti-Homosexuality Act was passed by Parliament in 2013 and signed into law a year later. Uganda’s constitutional court later nullified the act after a challenge by petitioners. But, other laws prohibiting homosexual acts, including section 145, remain in Ugandan law. 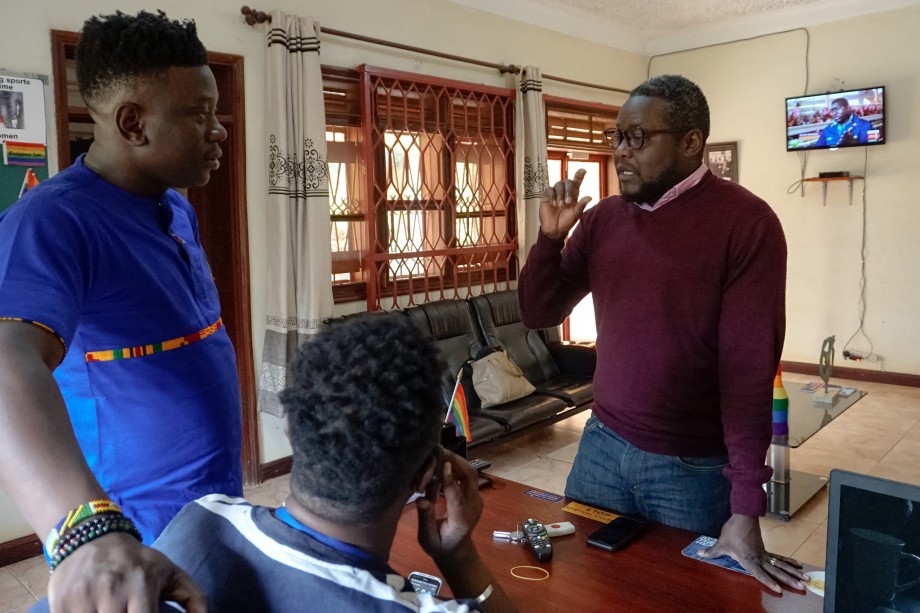 Pepe Onziema, right, meets with Daine Bakuraira and Richard Lusimbo in Kampala. As a transgender man, Onziema has been unable to adopt a child in Uganda.

“Everybody has a right to family of their choice, but the rights of the [lesbian, gay, bisexual and transgender] community are violated at every level,” says Nicholas Opio, a human rights lawyer.

Opio says that while violations of the rights of members of this community start with Uganda’s law, which makes same-sex relations illegal, they continue to the broader society where the lesbian, gay, bisexual and transgender community is stigmatized.

Kasha Jacqueline Nabagesera is a human rights activist who identifies as a lesbian. She started the application process to adopt a child as a single parent from a local organization, Ugandans Adopt.

“I had gone through all the vetting. The official from Ugandans Adopt had come to my home several times. They visited my parents’ home, too,” says Nabagesera. “I had a room for the child I was adopting prepared. I was ready.”

But her hopes for adopting a child ended three years later when officials from the Ministry of Gender, Labour and Social Development told her they would not let her adopt a child.

“I asked them why. They told me because their best interest is with the child and that I am not ‘palatable.’ I asked them what they meant by that word, but they could only repeat what they had said,” Nabagesera says.

She believes she was denied a chance to adopt because the officials had investigated her and discovered her sexuality.

“I knew then that they had gone and dug deeper and found out I am a lesbian, and because of that, they denied my application,” she says.

Everybody has a right to family of their choice, but the rights of the [lesbian, gay, bisexual and transgender] community are violated at every level.Nicholas Opio, a human rights lawyer

When contacted by Global Press Journal, Ugandans Adopt declined to comment on the specific case. GPJ reached out to the Ministry of Gender, Labour and Social Development over the course of three months but did not receive a response. Uganda’s commissioner of Youth and Children, the government body involved in adoptions, also declined to comment. Neither Ugandans Adopt nor the government would confirm why Nabagesera was denied a chance to adopt a child. But some religious leaders also hold discriminatory views toward the Kuchu community.

“Those same-sex relationships are against our culture. They are foreign and very immoral and ungodly,” says Father Joseph Mukasa Nkeera, the director of communications for the Kampala Archdiocese of the Catholic Church.

“If they decide to love each other as man to man and woman to woman, then they are well aware that they can’t produce children. Why then give them a chance to raise our children?” says Nkeera.

Legal representation is another hurdle prospective Kuchu parents face in Uganda. Pepe Onziema, a transgender man, has been trying to adopt a child he intends to co-parent with a female friend and only recently found a lawyer to help him. But in some cases, homophobic attitudes permeate the legal profession.

“I have been trying to adopt this child for more than three years now, but all the previous lawyers I had gone to were skeptical. Their attitudes were around biblical and constitutional statements,” says Onziema.

“They told me kids can only be raised in a heterosexual family, and by ‘heterosexual,’ they meant one man and one woman who identify with the genders they were assigned at birth,” says Onziema.

More than 50,000 children live in orphanages in Uganda, according to a report compiled by the Ministry of Gender, Labour and Social Development. Nabagesera says the refusal to allow Kuchu people to adopt is hypocritical.

“Uganda says we have too many children in need of a family, and yet they don’t allow us to provide homes, love and care for our own,” Nabagesera says.

Turned down by the orphanage but not discouraged, Lucia and Asia continued to try to adopt. In 2017, they were successful.

“We knew that our only chance of adopting was for one of us to apply as a single parent but raise this child as a couple. We have now been fostering our 4-year-old girl since she was 2,” Asia says.

Although they have been able to have the family they have always wanted, Lucia and Asia still worry about their parental rights if they were to break up. They have raised their daughter as a couple, but only one of them would be recognized in the eyes of the court.

“Though we love each other to death and do not plan of ever separating, we are also very realistic that things can change, and if this relationship ends, if that ever happens, what will happen to my parental rights over our baby because Lucia legally adopted her?” Asia says.