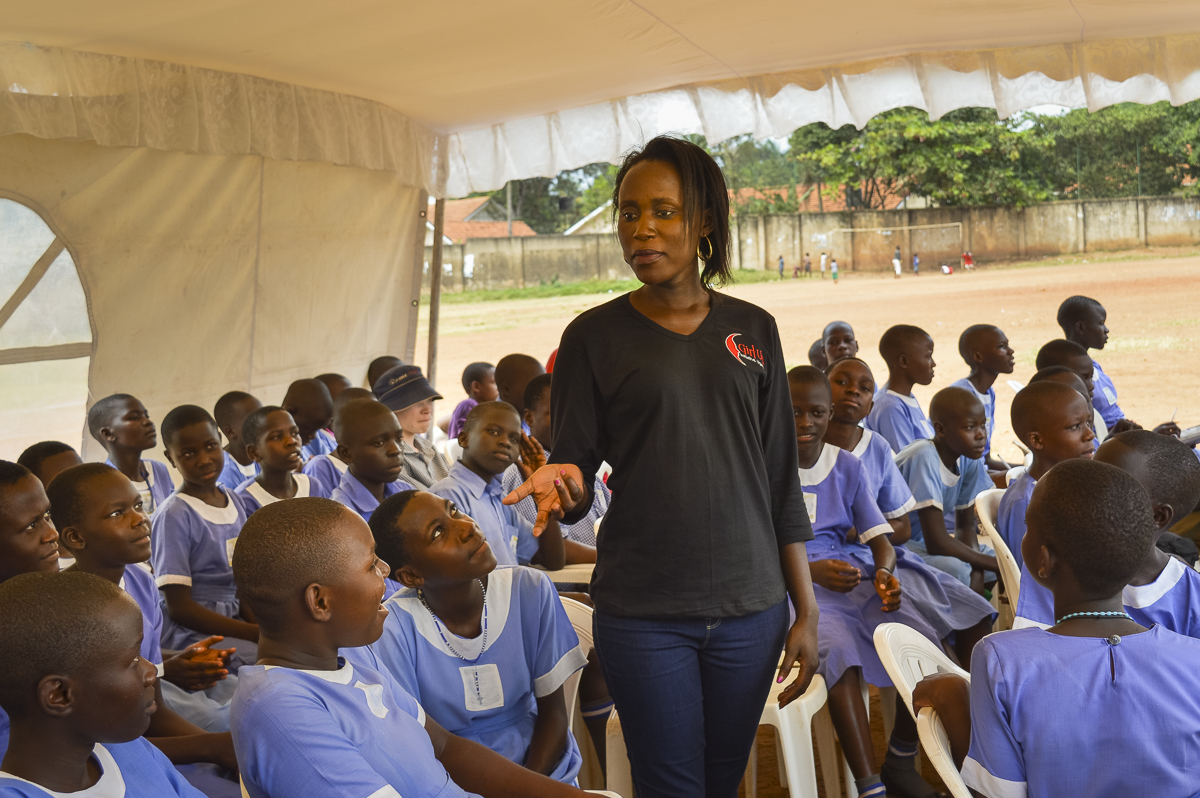 KAMPALA, UGANDA — In Kirombe Zone 5, a low-income neighborhood in Kampala, girls talk and laugh loudly with one another. Some watch young men play Ludo, a board game, at a local market. It’s the middle of the school term, but these girls aren’t in class.

Many girls in this neighborhood drop out of school at an early age, says Monica Nyiraguhabwa, who grew up here. Most of them get married soon afterward and start families they struggle to care for, she says.

Nyiraguhabwa was walking through the slum with Kimberly Wolf, an American with international development experience, in 2012 when she hit upon the idea to start an empowerment program for girls.

The same year, she and Wolf founded Girl Up Initiative Uganda to provide vocational skills for out-of-school girls as well as training to encourage girls to remain in school.

“I felt that there was a gap that needed to be filled,” Nyiraguhabwa says.

Even without the classic school education, I can make meaning out of my life with these life skills. Susan Nantale, 18, who joined a skills workshop run by Girl Up Initiative Uganda

Girl Up offers sexual health and reproductive rights training and courses on making sanitary pads ─ a key skill for girls who can’t afford to buy them─ as well as leadership training and other programs. The organization also started Mazuri Designs, which trains and employs women to design and sew clothes.

Through Girl Up, girls at select schools can attend workshops covering topics including communication skills, self-esteem and body image and human rights, according to the organization’s website. The goal, according to the website, is to help girls in “patriarchal environments that do not value and respect the rights of girls and women.”

“I can never be forced into marriage,” she says. “I can say no, and have the right to make decisions that will not hurt my future.”

Staying in school is a challenge for many Ugandan children, both boys and girls.

The country’s education system was once hailed as a success. The introduction of universal primary education in 1997 more than doubled enrollment numbers, according to a 2006 report from the Inter-Regional Inequality Facility.

But troubling dropout rates were recorded in more recent years. In 2009, an estimated 68 percent of students left without finishing, according to one 2012 UNESCO report.

Sometimes my aunt would tell me to stay home when my periods came because she could not afford to buy me sanitary pads, but that’s no longer an issue. Rachel Nanyonjo, 14, who learned to make her own sanitary pads via Girl Up Initiative Uganda

Widespread research notes that poverty, including lack of money to buy school supplies or even food, is a major reason why so many Ugandan students drop out of school, or don’t attend in the first place. Some students leave to escape violence meted out by teachers. Corporal punishment was banned in 1997, but it’s still common for teachers to cane students, according to a 2015 UNICEF report.

“Because of beatings, a significant number of the children find school a place of torture and therefore not worth staying in,” says Miriam Ahumuza, a programs and information officer at the African Network for the Prevention and Protection Against Child Abuse and Neglect, Uganda.

In some cases, according to a 2014 UNICEF report, girls suffer sexual assault at the hands of teachers. Early marriage for girls and a lack of sanitary pads, which would allow them to attend school while menstruating, are also noted as reasons for dropping out.

For the poorest students, school fees are a hindrance. Fees were formally abolished in the late 1990s, but many schools still charge them.

At St. James Biina Primary School, one of the places where Girl Up conducts training, parents are required to pay 60,000 shillings ($17) per term, even though it is a public school.

“That is still too expensive to some parents,” says Wolf, Girl Up’s cofounder. “The government needs to find a way of subsidizing the fee so it’s still low and affordable, and, if possible, remove it totally.”

Alex Masaba, the deputy head teacher at Mwereerwe Primary School in Wakiso district, blames automatic promotion for the high number of dropouts. Students are promoted to the next class regardless of their performance, he says.

“Because of the difficulty to understand what is being taught in the classes they have been promoted to, they find learning more difficult and resort to dropping out,” Masaba says.

For girls, sexism can be a hurdle. Some parents prioritize their sons over their daughters, Nyiraguhabwa says.

“I experienced discrimination as a girl,” she says. “My younger brother was more privileged. My parents provided everything he needed in school. His school fees were paid before mine. Nothing much was expected of me.”

Nyiraguhabwa surpassed her parents’ expectations by continuing her studies. Now, she says, she holds a master’s degree in education, gender and international development from the University College London in the U.K.

Girl Up has worked with about 200 girls since it was founded, Nyiraguhabwa says. In addition to St. James Biina Primary School, Girl Up works at Murchison Bay Day and Boarding Primary School and Luzira Primary School.

Girl Up is funded and assisted by a handful of partners, including the Stone Family Foundation, the Collective Heart Foundation and Girls Not Brides, according to the Girl Up website.

“The number of girls dropping out of school has gone down a bit,” Kituyi says. “Before, we would lose about five to seven girls per term. Now it’s below five, and that is a good sign.”

The school is also recording higher grades, she says.

Rachel Nanyonjo, 14, says she used to stay at home when she menstruated, but now she never misses classes, because Girl Up taught her how to make her own sanitary pads.

“Sometimes my aunt would tell me to stay home when my periods came because she could not afford to buy me sanitary pads, but that’s no longer an issue,” she says.

Susan Nantale, 18, joined the out-of-school girls program this year, after dropping out of high school because she couldn’t afford the fees. Nantale learned how to sew and hopes to start her own business.

“Even without the classic school education, I can make meaning out of my life with these life skills,” Nantale says.

“Sometimes the parents are too busy to talk to their children, and the teachers are so involved in their practice that girls will not have someone to motivate them to stay in school,” she says.