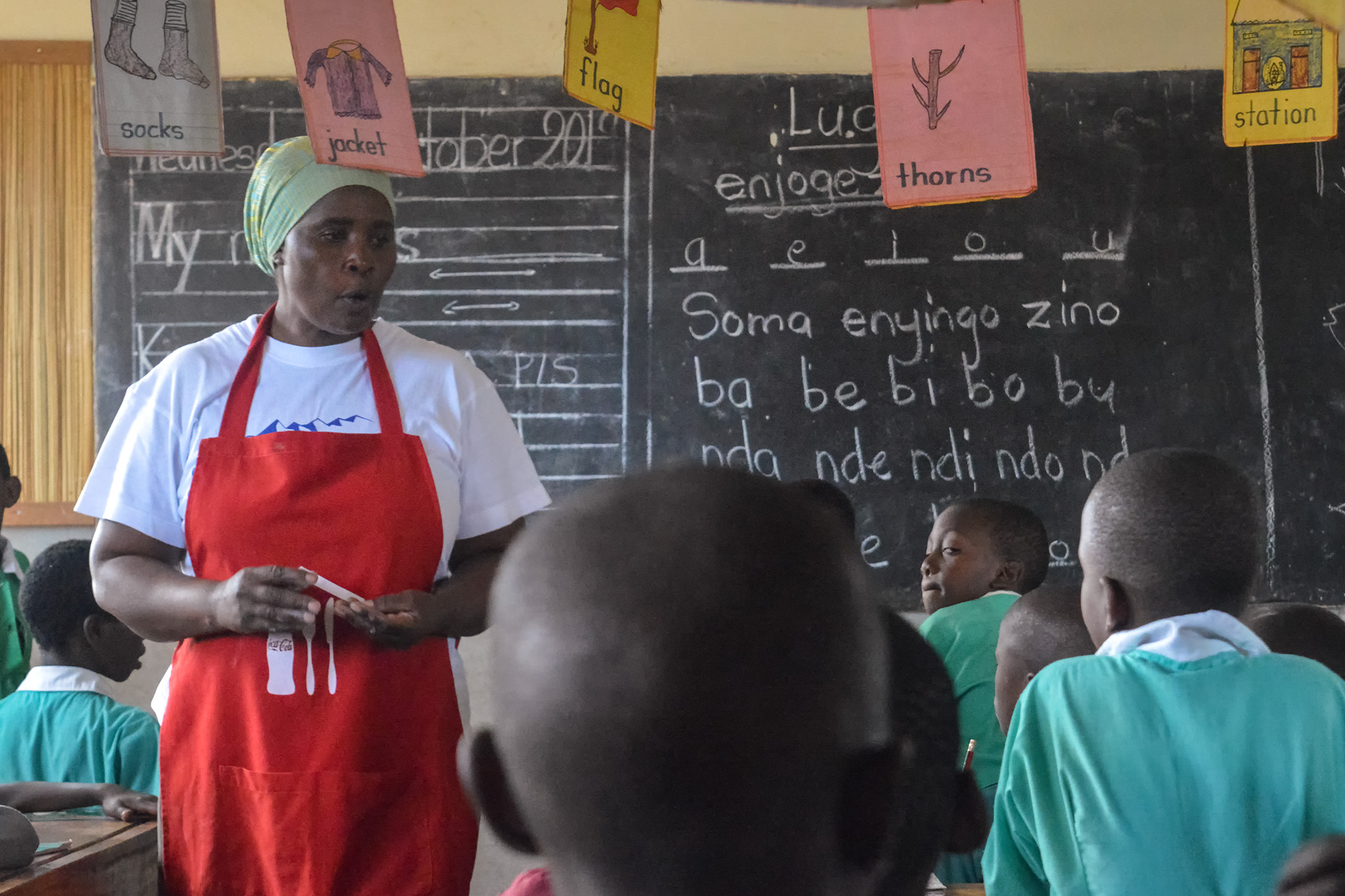 MUKONO, UGANDA – English has been the official language of instruction in Uganda since colonial times. But now, teachers and activists are pushing to educate the country’s next generation in other languages that are commonly used in homes and villages across the country.

Learning in Luganda, one of Uganda’s major languages, “makes children understand concepts better,” says Jamidah Nabirye, a primary-school teacher here. An openness for speaking languages other than English is important, she says.

Kiwanga UMEA Primary School, where she has taught since 2014, uses the “thematic curriculum” approach, which encourages instruction in mother tongues for a student’s first three years of primary education. Schools that use this approach generally transition to English-language instruction in the fourth grade.

Learning in mother tongues has given students an advantage over peers whose education is strictly in English, says Charles Batambuze, executive director of the National Book Trust of Uganda, a nongovernmental organization.

“Learning in a language familiar to learners improves reading, writing and comprehension,” he says. “It lays foundation to learn social studies, mathematics and other languages.”

Although mother-tongue learning is more common in rural areas, it is becoming more popular in urban areas, thanks in part to strong exam results in rural areas.

Learning in a language familiar to learners improves reading, writing and comprehension. It lays foundation to learn social studies, mathematics and other languages.Charles Batambuze, executive director of the National Book Trust of Uganda

“There is an upward trend; learners read and understand more comprehensively,” he says.

Parents say they also have noticed a difference in younger children who are learning in Luganda.

Nasser Sebakaki’s three children attend Kiwanga UMEA Primary School and learn in Luganda. He says he has noticed a difference when he reads aloud to his children in their native Luganda. “When I read my children books, I get the feeling that they understand what they are learning.”

Although some data support mother-tongue learning, the practice has challenges.

More than 45 languages are spoken in Uganda. Students at urban schools come from numerous tribes and often speak many different languages. It would be impossible to accommodate learning in each student’s mother tongue, says Bernadette N. Karuhanga, deputy director of the National Curriculum Development Centre.

“All these languages can’t be taught and examined. The government can’t afford to hire teachers,” she says.

Some urban schools have a long tradition of punishing students for speaking languages other than English on school grounds.

In some cases, students caught speaking their mother tongues at school are forced to wear dirty sacks with derogative words written on them or have cow bones hung around their necks. Students are told to transfer these items to the next student they hear speaking a local language.

These practices reinforce a long-standing bias against people in Uganda who don’t speak English.

“This must stop,” says Kagayi Ngobi, director at Kitara Nation, an arts company that promotes Luganda and Lusoga poetry in schools.

Students at Kiwanga UMEA Primary School come from the Basoga, Banyarwanda, Bagisu and other tribes, and many have multilingual backgrounds. Children are taught in Luganda and English to ensure they get the benefits of early mother-tongue learning but also are prepared for national exams, which are conducted in English.

“We do not punish children who speak their languages,” says Hussein Ssemujju, the head teacher. “But we encourage them to speak English since exams are set in English.”