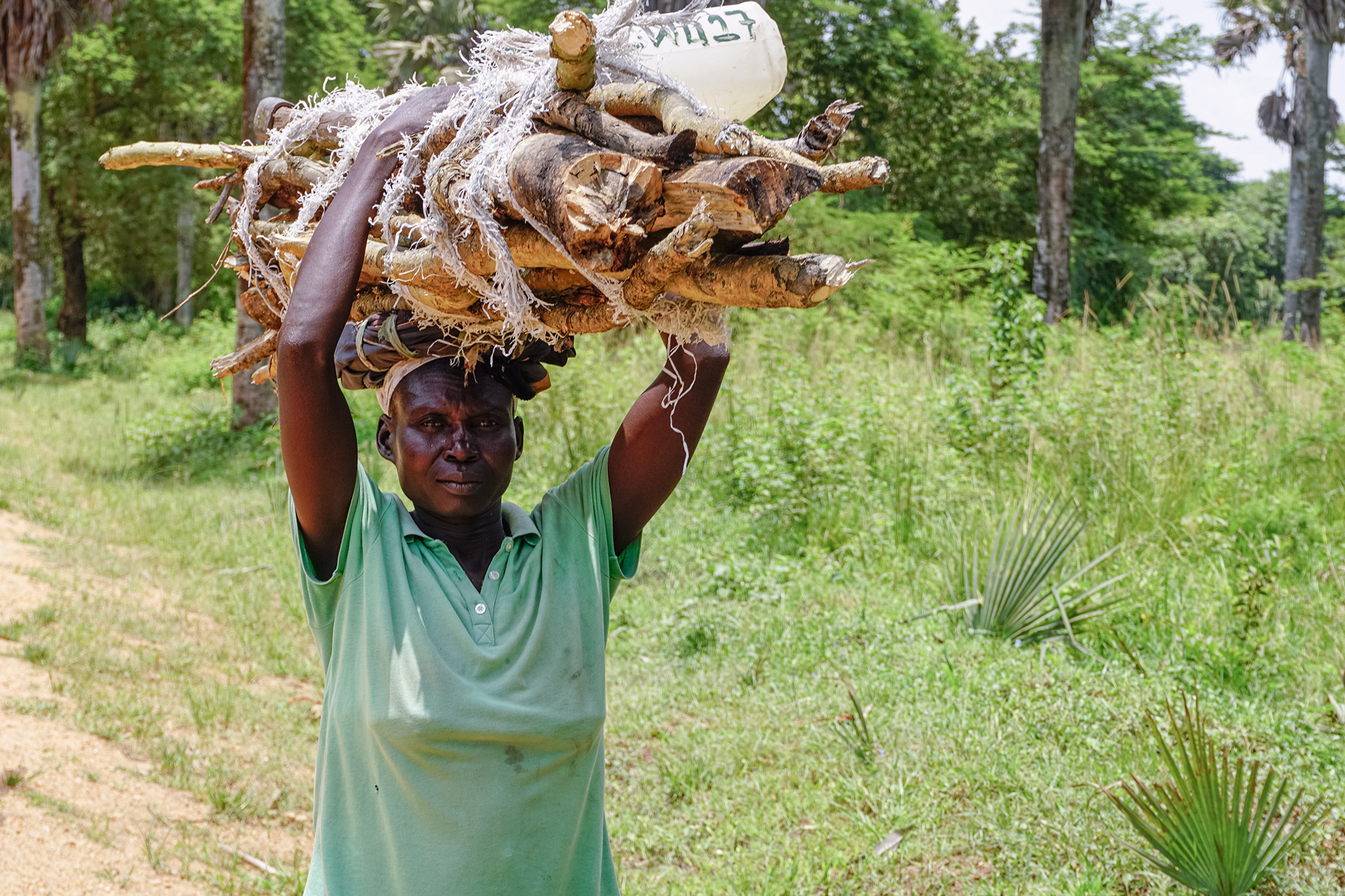 PALORINYA, UGANDA — When Regina Angok arrived in Uganda as a refugee from South Sudan in 2016, she collected firewood for her family just like everyone else. Back then, cutting trees was not a problem. Now things have changed.

“The hosts say we are finishing the trees for them and that we have destroyed their once beautiful environment. They say that they now have to move longer distances to cut trees because of us (refugees),” Angok says in Palorinya, a village in Northern Uganda’s Moyo district.

Several NGOs, environmental groups and local leaders have warned refugee communities about the dangers of cutting trees and have also encouraged planting them, Angok says. But it is not enough to ease the impact of an estimated 120,000 refugees in Palorinya.

“I need firewood to cook food for my family every day,” Angok says. “I collect firewood four times a week, as my family is large. The quantity of firewood we need daily has increased, as more of my family joined me in 2018.” She was separated from some family members when fighting made them abandon their home in South Sudan, but now they’ve joined her.

“My biggest worry is now I have to walk longer distances to get the firewood. This worries me sometimes, as we get beaten or raped on the way. That is why I move with my children to get firewood, because it is safer,” Angok says.

Uganda’s forest cover has reduced from 24% to 9% between 1990 to 2015, according to the Ugandan Ministry of Water and Environment’s 2016 State of Uganda’s Forestry report. Half of the country’s unprotected forests have been lost in the last 25 years.

According to the report, migration is a significant contributor to loss of forest cover, as communities clear forest for firewood, settlement and construction of houses. 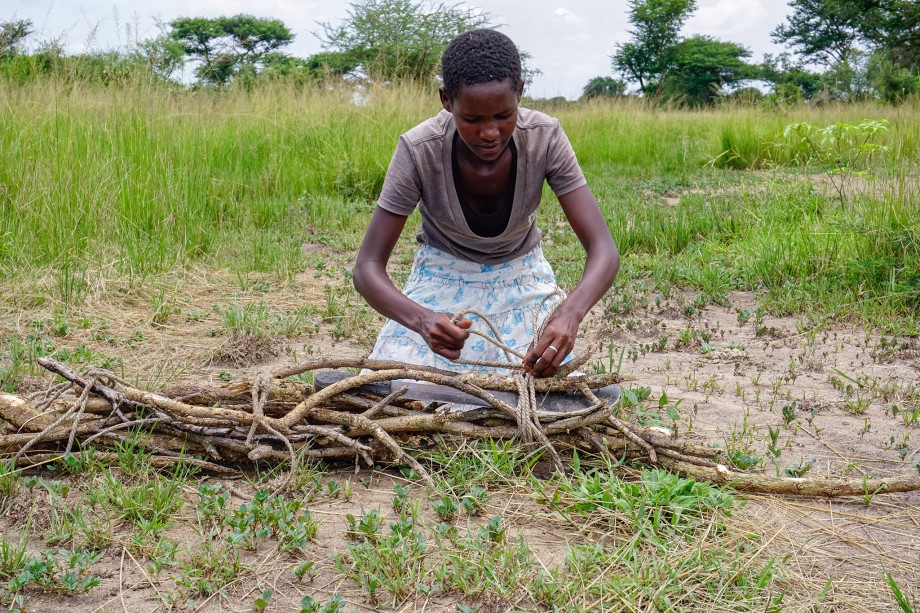 Joan Nyantol secures a bundle of sticks for firewood. Women and girls are often tasked with gathering fuel for cooking, but they face daily risks searching for it.

Forest vegetation in the West Nile region of Uganda, which had recovered during the more than two decades of civil war between the government and the Lord’s Resistance Army, is now disappearing quickly. When Ugandans returned to their homes from internal displacement camps, they started cutting down trees for firewood, building houses and burning charcoal. This activity has increased with the overall population growth of South Sudanese refugees in Northern Uganda settlements.

“The population of the refugees outnumbers the host community. They have done a lot of destruction to the environment, which is causing a lot of tension between the communities,” says David Wangwe, the settlement commandant, who oversees the Palorinya Refugee Settlement for the Ugandan government.

Gabriel Onoma, a member of the host community, says it’s been a challenge to get firewood lately.

“Most of the trees have been cleared since the refugees came here. Sometimes we don’t have wood to cook and have to buy or go hungry because of the distance to collect it,” he says.

In an effort to restore tree cover and reduce conflict between the refugee and host communities, organizations like the Lutheran World Federation distribute tree seedlings.

“So far 154,000 fruit seedlings and 190,677 exotic, fast-growing trees have been planted since 2018,” says Ojelel Benjamin Epubi, a program officer with the Lutheran World Federation’s Moyo program.

“Tree planting (both fruit and wood trees) as a way of environmental restoration approaches and improves on the nutrition of households and for income generation,” Epubi says. 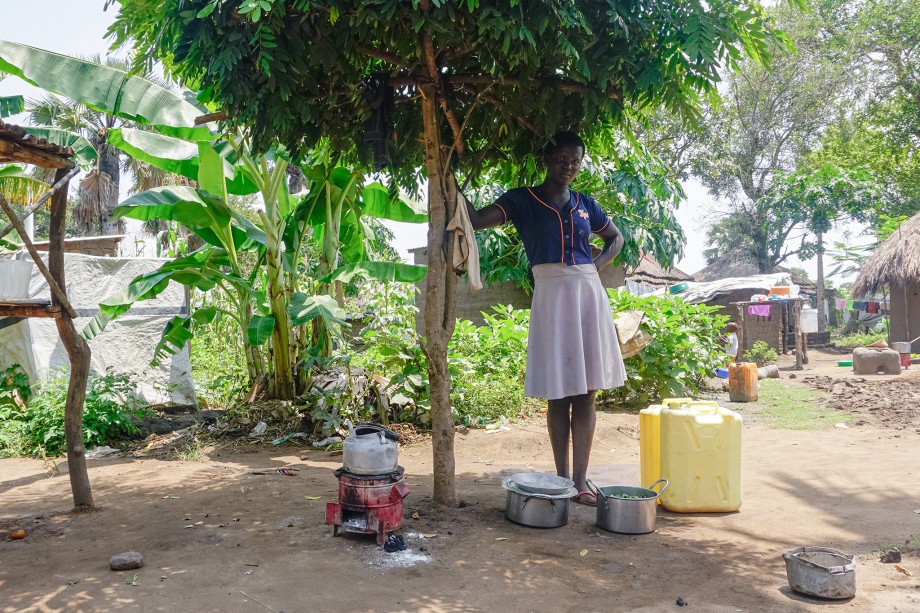 Nyankiir Aweng Justine begins preparing a family meal, using one of the clay stoves donated to disabled refugees. The stoves burn charcoal and not firewood, and are coveted in most communities.

However, some complain about the timing of seed giveaways and whether they will yield results. Orasto Wayigo, a local leader in the Palorinya settlement, says, “Organizations give both host communities and refugees seedlings at the wrong time. It is important that seedlings are given during the rainy season. That is why you find most of them getting spoiled within the compounds.”

Another strategy by the Lutheran World Federation involves the distribution of so-called “clean-energy stoves” that burn less wood or use alternative sources of fuel, Epubi says.

Those who manage to obtain the stoves are pleased with the results. Esther Juan, a refugee who depends on firewood to cook, uses one of the muddy brown, rectangular stoves molded from clay.

“The clay stoves are good because unlike the three-stone stoves, they make me use less firewood. This means less trips to cut down trees. I used to go at least five times a week to collect firewood, but since using the stove, it’s only three times,” Juan says.

However, not everybody has access to the stoves. Sakari Alison, the refugee welfare committee leader for Keguru Village, in the Palorinya refugee camp, says, “The need for energy-saving stoves is high, and those that do not get them feel discriminated upon because they are only for special needs people. Most refugees feel left out because they all feel like they are in a special situation, away from home and helpless.”

Wangwe says the Office of the Prime Minister is working with partner organizations to put in place environment restoration plans.

“Ensuring environment restoration with various organizations means that more trees will be planted. We are also sensitizing the community on their vital role in tree planting,” says Wangwe.