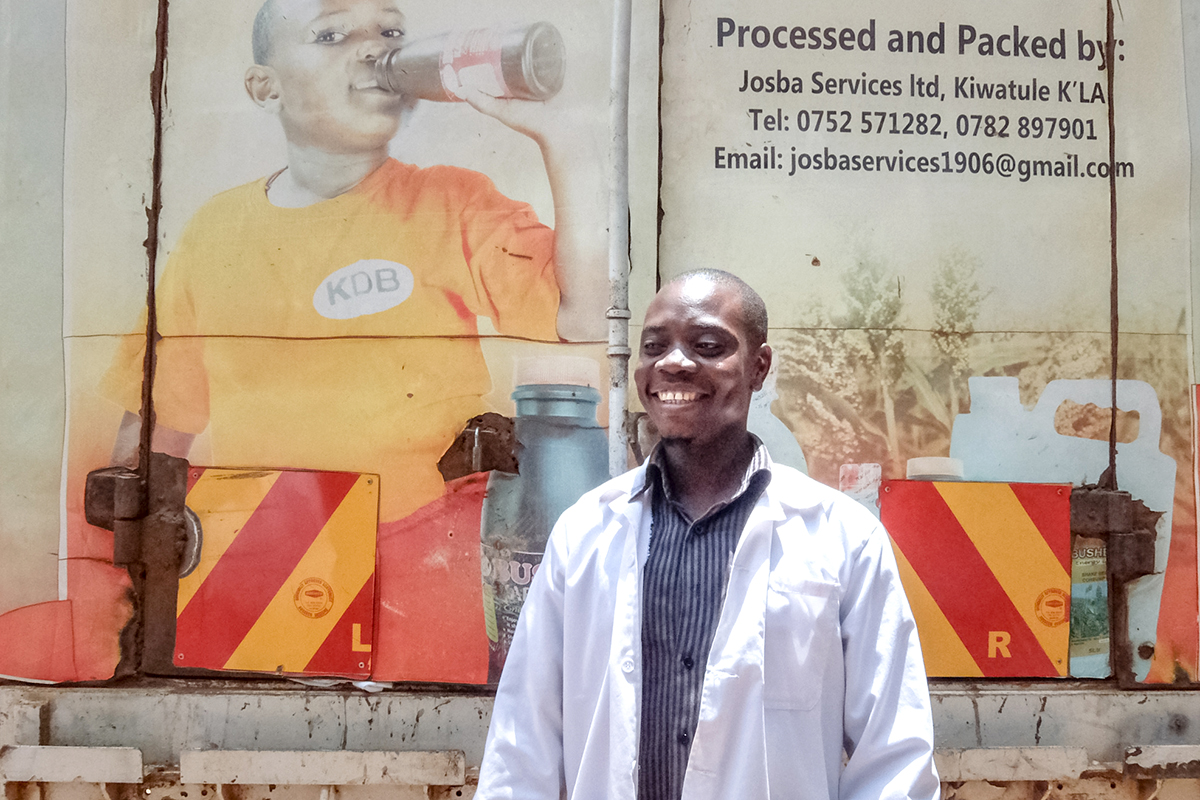 KAMPALA, UGANDA — Robert Wonyera sits on a bench at a makeshift restaurant on Rashid Khamis Road, one of the busiest roads in Kampala, Uganda’s capital city. He overhears a customer requesting the same menu item that he’s just ordered.

And then another, and then two more. After a few minutes, he loses count.

“I drink bushera because it is healthy,” Wonyera says between sips. “It gives energy and does not contain gas like soda.”

At the restaurant, Mukuuza has been making and serving the beverage, made from sorghum flour, fermented sorghum or millet grains and water, for twenty years. Mukuuza, who hails from the Mbarara District in western Uganda, says he learned how to make bushera from his mother.

The beverage has always been a hit with regular customers, but new customers also go for bushera because of its health benefits, he says.

Bushera is typically made and consumed in western Uganda, where sorghum, a cereal grain, is grown. But in recent years, bushera has gained popularity among Kampala residents, who say it is healthy because of the natural ingredients. But as the beverage becomes popular, commercial manufacturers are adding refined sugar for taste and preservatives to increase shelf life.

Globally, the increasing consumption of sodas and other sugary beverages are in part to blame for the fact that diabetes prevalence has almost doubled since 1980, according to the World Health Organization. Similarly, the percentage of adults with diabetes in Africa has increased from 3.1 percent in 1980 to 7.1 percent in 2014.

According to the Uganda Diabetes Association, the national diabetes prevalence rate is currently 1.4 percent.

Food and beverage consumption patterns among Ugandans have shifted in recent years as household incomes have risen. A wider variety of food and beverage products, organic and processed, have entered retail spaces, and people have gained access to improved nutritional information. Some Ugandans opt for processed foods and beverages because they are widely available, especially in urban areas, and at times cheaper than organic products, others buy organic produce and beverages because they can afford it, and they say it is good for their health.

“When it is hot [during the day], many more [customers] come for bushera,” says Mukuuza. 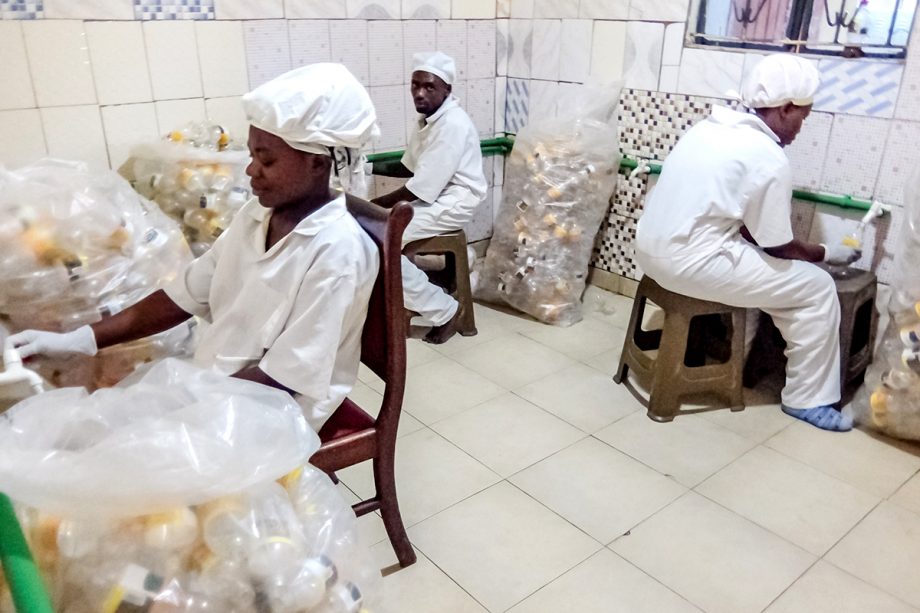 The Josba Services staff fills bottles with bushera at their factory in Kiwatule, a suburb of Kampala, Uganda.

A mug of Mukuuza’s bushera, which is just over half a liter (around 17 ounces) goes for 2,000 Ugandan shillings ($0.55). He says this is the same price as some drinks sold in supermarkets, made with all-natural ingredients. Mukuuza also makes bushera for people who request it for special events, such as weddings.

The first step in making bushera is to mix hot water with sorghum flour, which is a source of B vitamins, iron, zinc and proteins. While research shows that sorghum may be useful in managing cholesterol and reducing the risk of diabetes, bushera manufacturers say that the nutrients found in sorghum also provide energy.

After mixing the water and flour for about 15 minutes over high heat, a fermented portion of the sorghum grain is added. The grain is fermented by soaking in water for three to five days, then drying and crushing it to form a thick, paste-like substance. The liquid mixture of all three ingredients is then chilled in the fridge or freezer and is ready for drinking.

Mukuuza says bushera is becoming popular with large-scale producers, but he still makes enough money from bushera sales in a month to take care of his wife and five children, and save some.

Caroline Mwesigwa buys bottled bushera from her local supermarket. She says it is her favorite drink because she feels full and energized after drinking just one 500-milliliter (17-ounce) bottle.

“You can take it and not feel hungry or thirsty for hours,” says Mwesigwa.

But Susan Muduwa, a nutrionist, says commercially manufactured bushera is not as healthy as homemade bushera because it is sweetened with refined sugar and contains preservatives to extend the shelf life.

Biliali Golomoka, general manager of Josba Services, one of five Kampala-based bushera manufacturers, explains that with preservatives, bushera is suitable for drinking for up three months. Comparatively, bushera without preservatives, becomes unfit for consumption after two weeks.

He says consumer interest is growing as they advertise their product on the radio and tell people about the health benefits of sorghum.

For traditional bushera makers like Mukuuza, adding preservatives is not an option. He believes that the sugars and preservatives compromise the health benefits, a risk he is willing to take with his product — even if it means that he has to get rid of a batch of bushera when it is no longer fit for drinking.