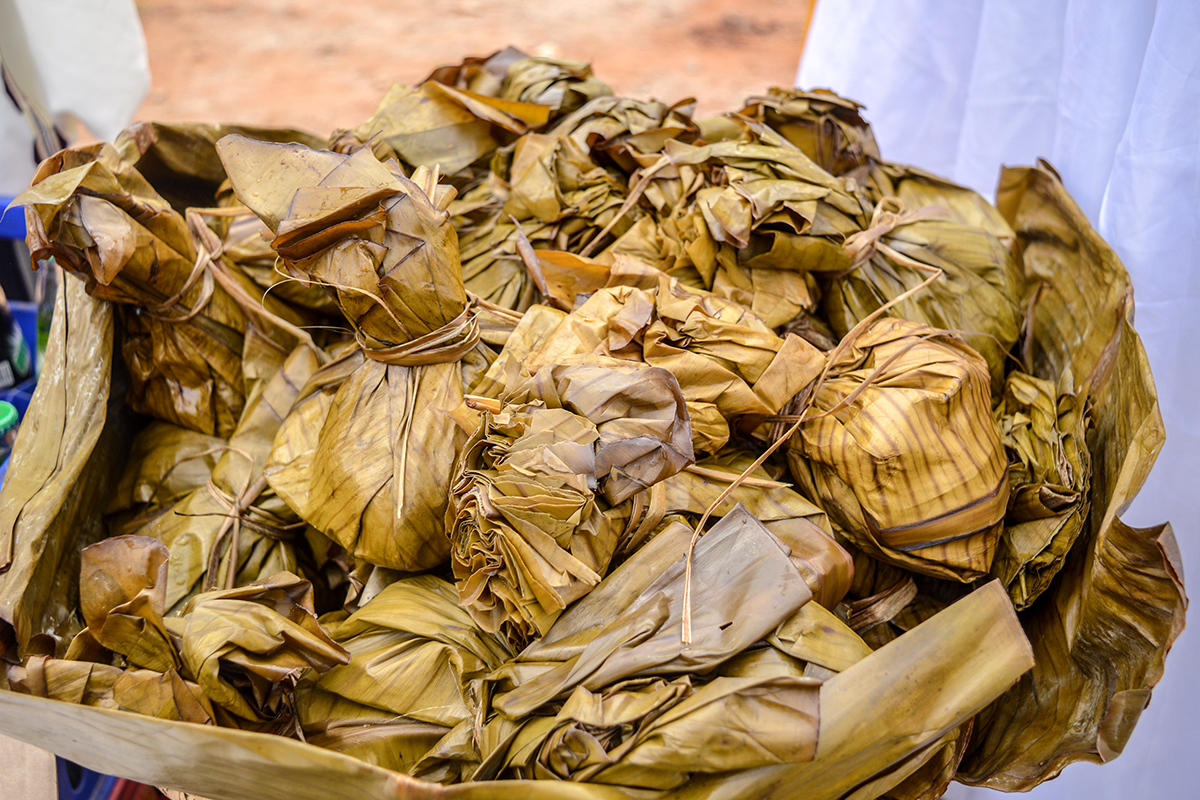 KAMPALA, UGANDA —Black lines run down a gold banana leaf. A string is tied around the top ends of the leaf, like a neck tie, creating a pouch. The unknown contents of the immaculately wrapped pouch – and the accompanying aroma – raise curiosity.

This is the traditional way of making luwombo, a unique mixture of sauce and a variety of ingredients enveloped in a banana leaf and then steamed over a fire for hours.

“You don’t simply cook it,” says Mudasiru Ahimbisibwe, owner of Luwombo Restaurant in Kamwokya, a suburb of Kampala. “You assemble it.” 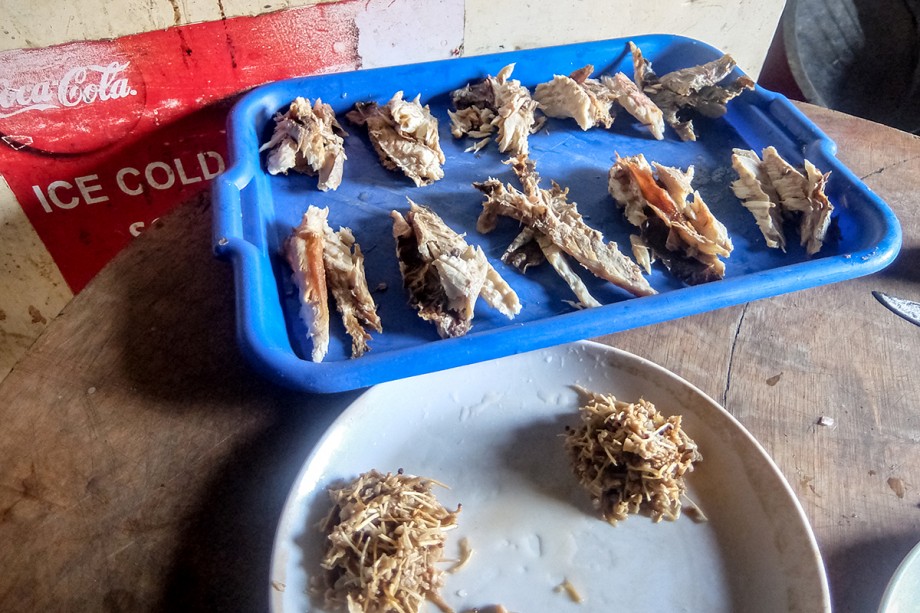 Mushrooms and dried fish – two popular luwombo ingredients – await mixing. The ingredients will be added to a sauce, and scooped into a banana leaf, before being wrapped for cooking.

At Luwombo Restaurant, a plate of luwombo goes for 10,000 shillings (about $2.77) and is the most expensive item on the menu. Yet Ahimbisibwe says his luwombo is always the first to sell out.

“My customers place their order a day before and this makes me heed their wishes,” he says.

While wrapping the ingredients in the banana leaves takes a great deal of preparation, cooking the dish is also time consuming, as a perfect luwombo takes about six hours to steam on a fire.

Despite the dish’s high price tag, customers are not deterred.

“Customers say it bears meaning when one is paying for quality,” says Hellen Basemera Dande, owner of Rafikiz Restaurant in Kamwokya.

Asked what makes luwombo worth purchasing despite the high price, Dande says, “Luwombo is a meal one will enjoy knowing very well that there was no nutrients that escaped en route the cooking process.” 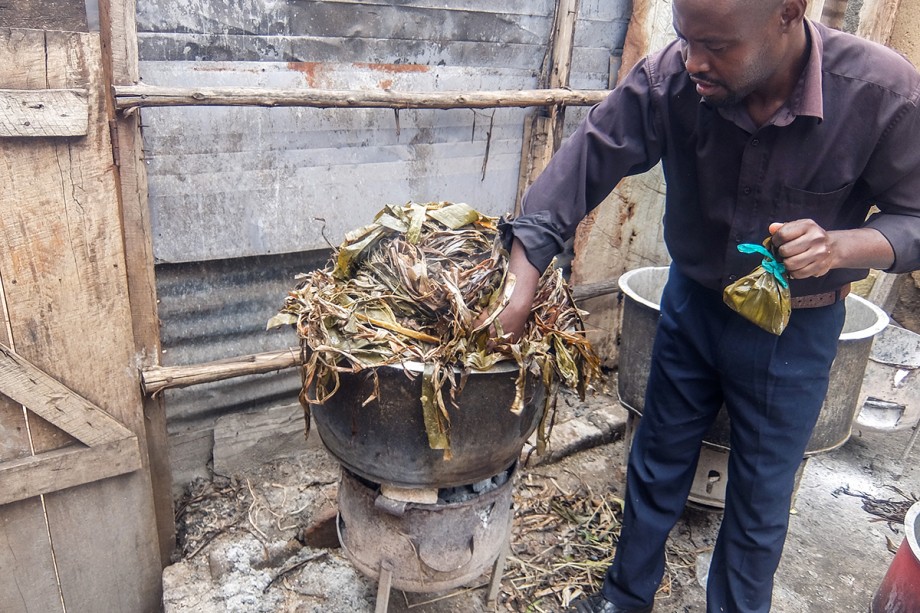 Mudasiru Ahimbisibwe, owner of Luwombo Restaurant, unwraps luwombo one at a time. This batch of luwombo has mushrooms and nuts, steamed to perfection within a sauce.

Zaaka Mugoya, a customer at Luwombo Restaurant, adds another reason.

“When I am eating luwombo I am sure there was no frying done because the sauce is wrapped, and only opened at the point of eating,” he says. “It is not fried, and in that way I devour my meal without any worry about cholesterol.”

Moses Mutamba, the chef at Rafikiz Restaurant, says that many customers are enticed by luwombo because of its powerful aroma.

“The banana leaf sheathing and the steaming creates a delicious aroma very specific to only luwombo,” he says, adding that for people with appetite issues, the alluring smell is often helpful.

Staff at Luwombo Restaurant have also noticed that many customers turn to luwombo for health reasons.

“People, especially the alcoholics who fear the effects of too much alcohol, run to the luwombo restaurants to get the full nutrients, which they hope counteracts the alcohol action on their internal organs,” says Enoch Mubangizi, the chef at Luwombo Restaurant. 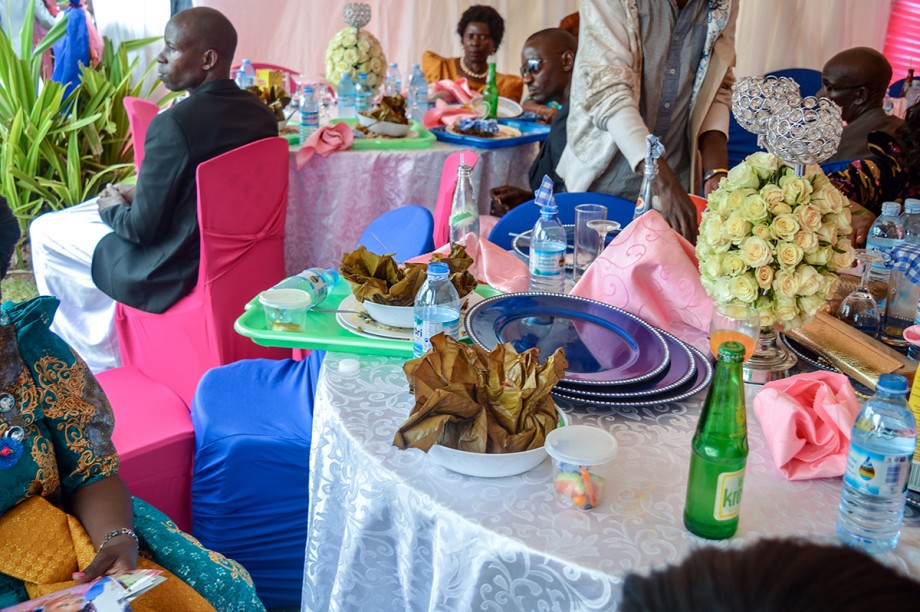 At an introduction ceremony, or engagement ceremony, during which the friends and family of the groom visit the family of the bride-to-be to state their marriage intentions, plates of unwrapped luwombo decorate the dining tables.

For many Ugandans, says Mugoya, luwombo is also a food with a touch of home.

“It cures the nostalgic feeling,” he says, speaking to a current sentiment in which many Ugandans find themselves wanting to partake in and uplift Ugandan culture and tradition. Food plays an important role in this.

In a Kiganda home in central Uganda, luwombo would make an appearance on the menu at any function. Today, due to the great amount of time and labor required to prepare luwombo, it’s made less frequently inside the home. Instead, many people are turning to restaurants, such as Luwombo Restaurant, for the traditional and nutritious dish.

Above all, luwombo is a treat. Once the sauce and ingredients are contained and cooked within the banana leaf, the hungry customer eagerly anticipates the unwrapping.

“It is like the unveiling of the bride,” says Dande. 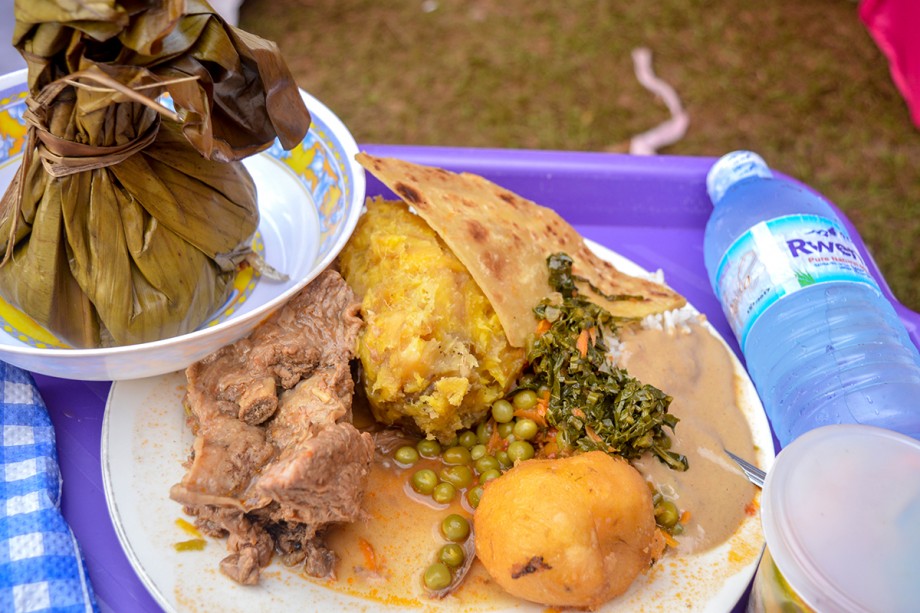 A plate of matooke, a Ugandan staple food made from green bananas, as well as a potato, chapati, cooked greens and meat accompany a chicken luwombo.

What you need:
Large saucepan with a lid, or a second saucepan
Ladle
Spoon
String
A stove, preferably a charcoal stove

How to make chicken luwombo

1. If you are using a charcoal stove, begin the process of heating your coals so when you are ready to cook, the stove will be hot.

2. Pour 1 liter (4 ¼ cups) of water into the base of your cooking pot, then line the pot with four banana leaves. When it comes time to place the prepared luwombo in the pot, they will sit atop the leaves, ensuring that they do not come in direct contact with the hot water.

4. Spread the remaining six banana leaves out on a flat surface.

6. Separate the mixture into six individual portions and place those portions in the center of each banana leaf.

7. Take hold of the edges of a banana leaf and gather them together, creating a pouch to hold the mixture.

8. Tie string around the top of the pouch, leaving extra space in the pouch for the mixture to steam.

9. Repeat this process with the other five banana leaves and the remaining ingredients.

10. Place all of the wrapped leaves in your lined pot. Use the four leaves you set aside to line the top of the pot, then cover the pot with the lid, or other saucepan if the pot is too full for the lid.

11. Place the pot on top of the stove and steam for six hours.

12. After six hours, remove the luwombo and serve as is – unwrapping the dish is a part of the dining experience!

Recipe note: Fish, mushrooms or nuts can be substituted for the chicken. If you decide to cook a variety of luwombo, place different colored strings around each wrapped leaf so you can identify which kind it is.