The dogs of Uganda’s Police Canine Unit track down suspects, sniff out drugs and explosives, and retrieve evidence from crime scenes. But before they begin their careers as detectives, they are bred and trained in two specialized centers, and Global Press documented the centers’ work in photos.

Photo at top: Mark Murungi, a police constable, instructs Florence to find a handkerchief that he’s hidden about 1 kilometer (0.6 miles) away.

KAMPALA, UGANDA — Throughout Uganda, urban crime including kidnappings for ransom and drug smuggling, is on the rise but the Uganda Police Force (UPF) is using detection dogs to track down people who are breaking the law. UPF recorded a 3.3 percent increase between 2016 and 2017 in crimes reported to the police.

Robert Napakol, a police officer who works in Nsambya, a suburb of the country’s capital Kampala, says the force currently has 200 trained dogs. In 2017, the Uganda Police Canine Unit conducted 10,782 field operations, compared to 9,749 in the previous year, according to the 2017 annual crime report. The police made more than 6,000 arrests, while canine evidence was used to send some 2,000 suspects to court. 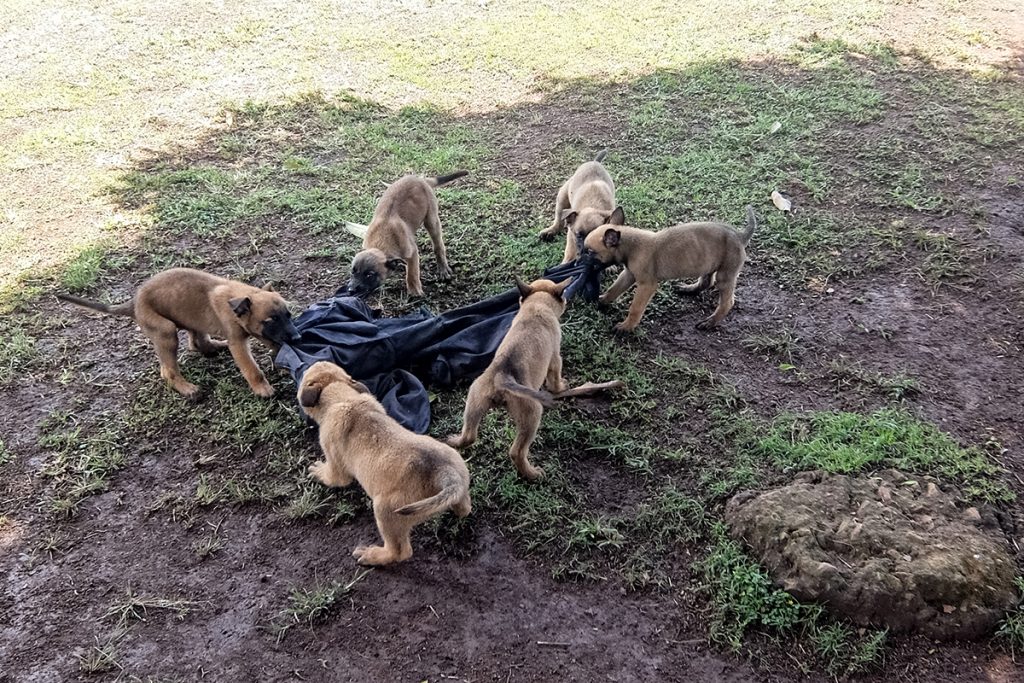 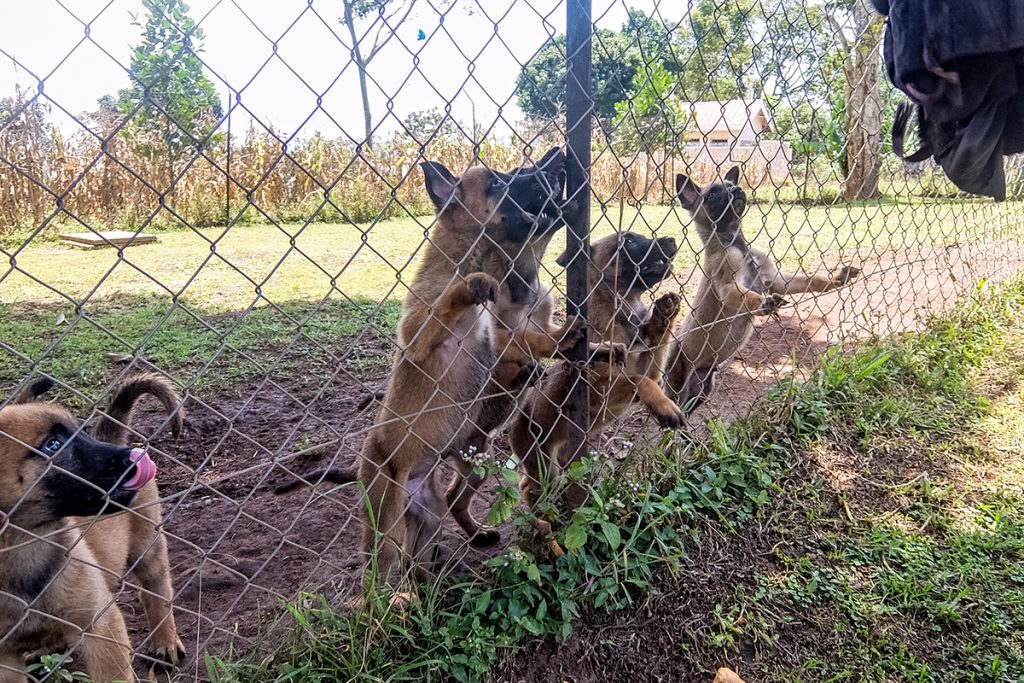 Since 2013, UPF has been breeding its own detection dogs, including Labrador retrievers, German shepherds, bloodhounds and these Belgian sheepdog puppies. One of the first training drills for puppies at the Nagalama Canine Breeding Centre, in central Uganda, is a tug-of-war like exercise called a puppy run. The puppies dash across the turf, pulling opposite ends of a rag with their teeth. James Paulo Zikusoka, a police inspector and trainer at the facility, says the drill, which doubles as a game, helps the dogs to stay active, learn to interact with one another and develop defense skills. Belgian sheepdog puppies start training to become detection dogs at the age of 2 months. 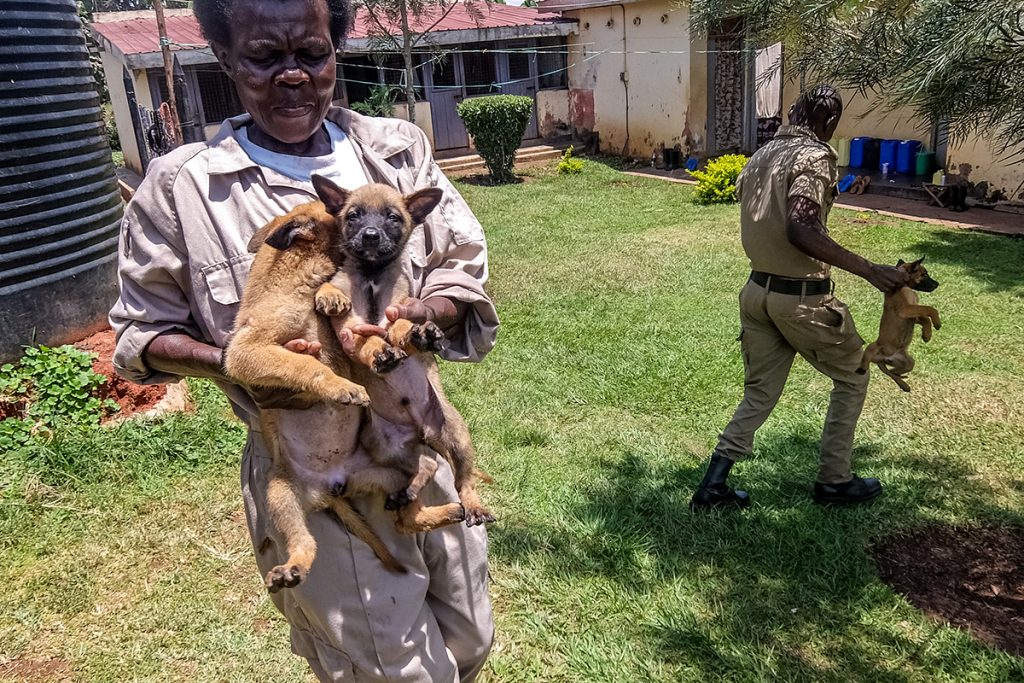 Police support staff Deborah Nanteza and James Paulo Zikusoka carry three Belgian sheepdog puppies to the field where they have their puppy run. The exercise lasts for about three hours. Trainers at the Nagalama Canine Breeding Centre, the only facility in Uganda for breeding police dogs, say the puppies go for the puppy run every day. Over time, this exercise tells trainers a lot about each dog’s personality and which types of field operations they’d be best suited for. 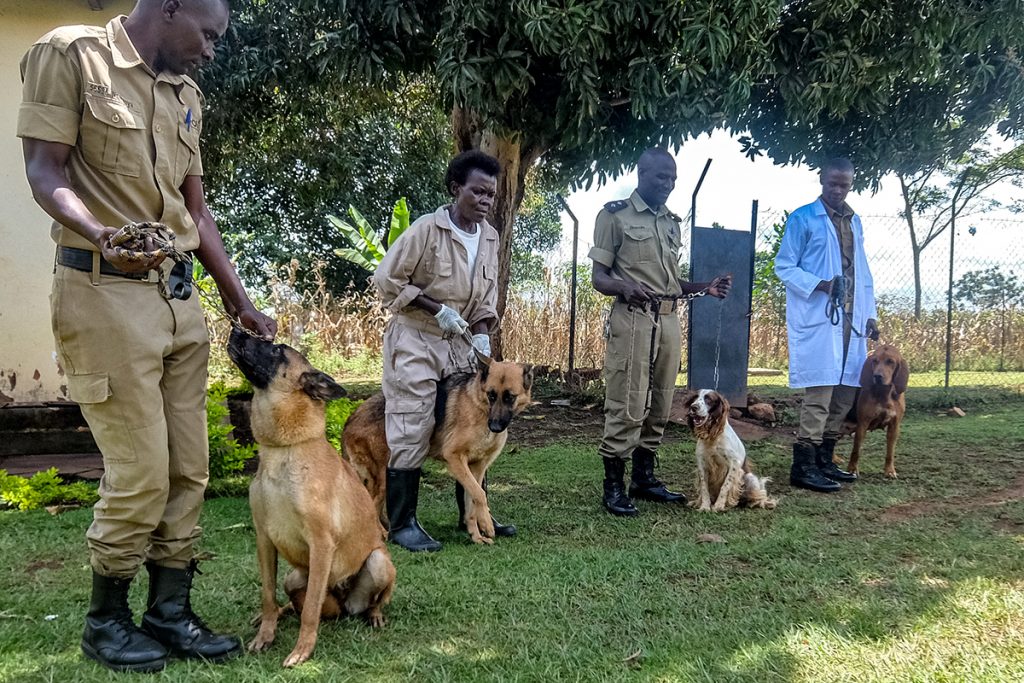 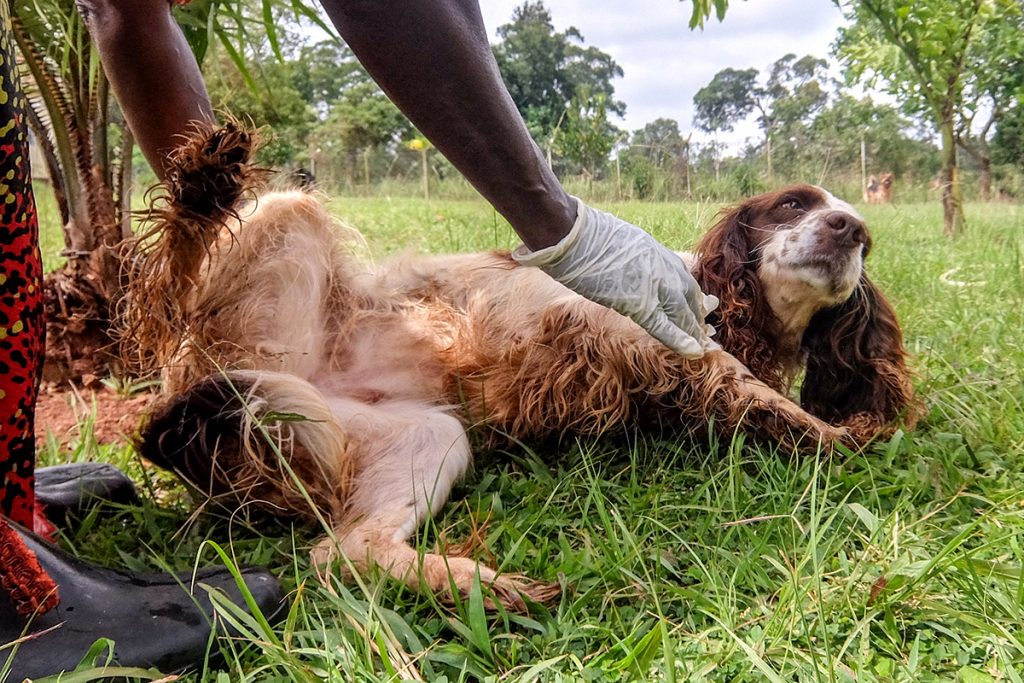 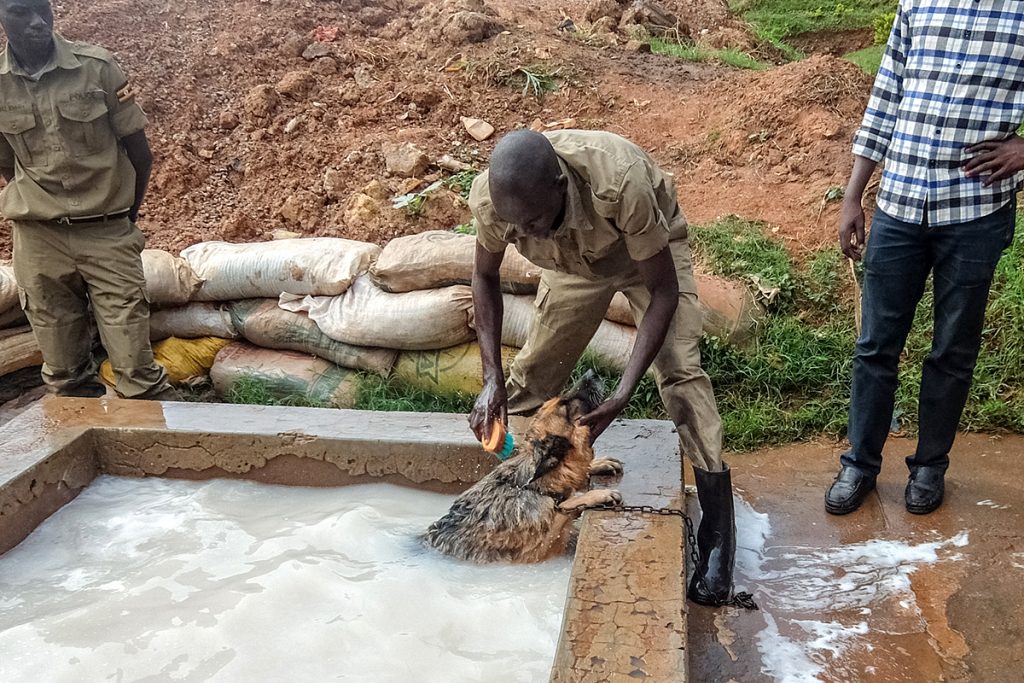 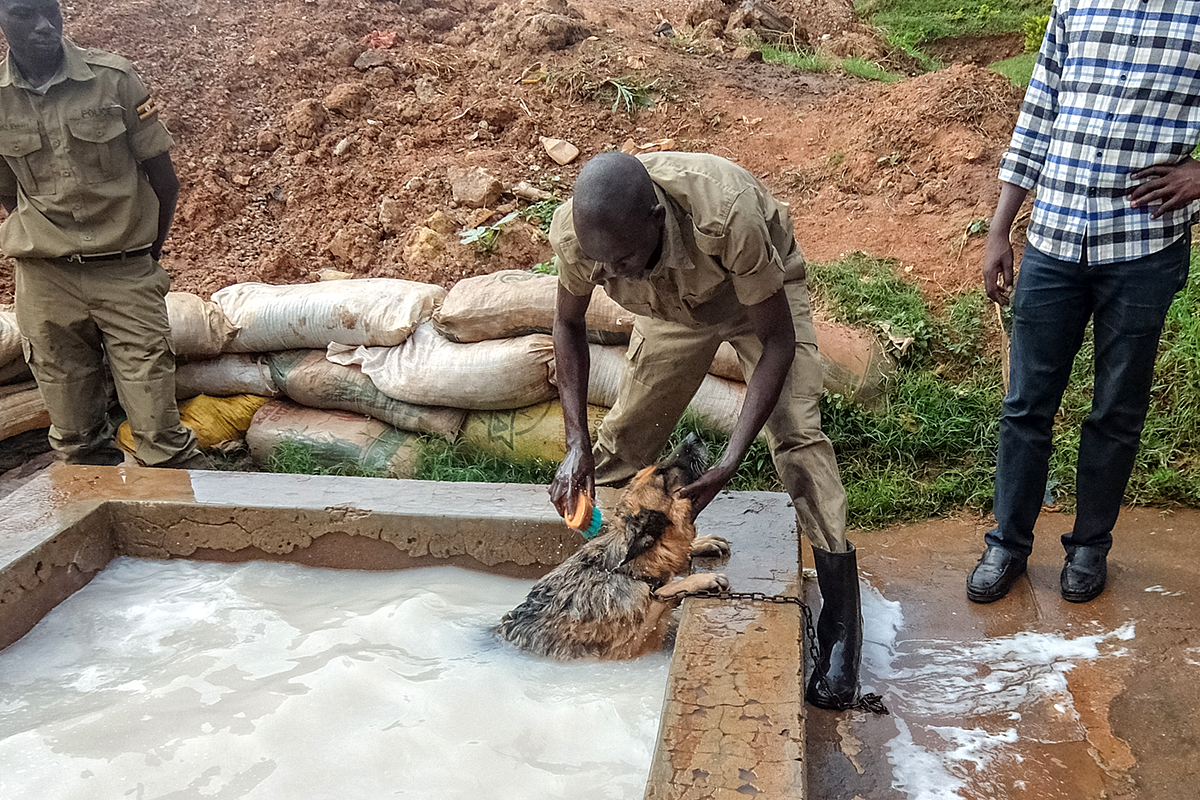 At 5 months, puppies are transferred from the Nagalama Canine Breeding Centre to the Nsambya Canine Unit, the training headquarters for Uganda’s detection dogs. The dogs also live and receive veterinary care at the Kampala facility. Innocent Kinyera (pictured here), a police officer, places Jessy, a 7-year-old Belgian sheepdog, in a dipping pool to kill parasites such as ticks and fleas. 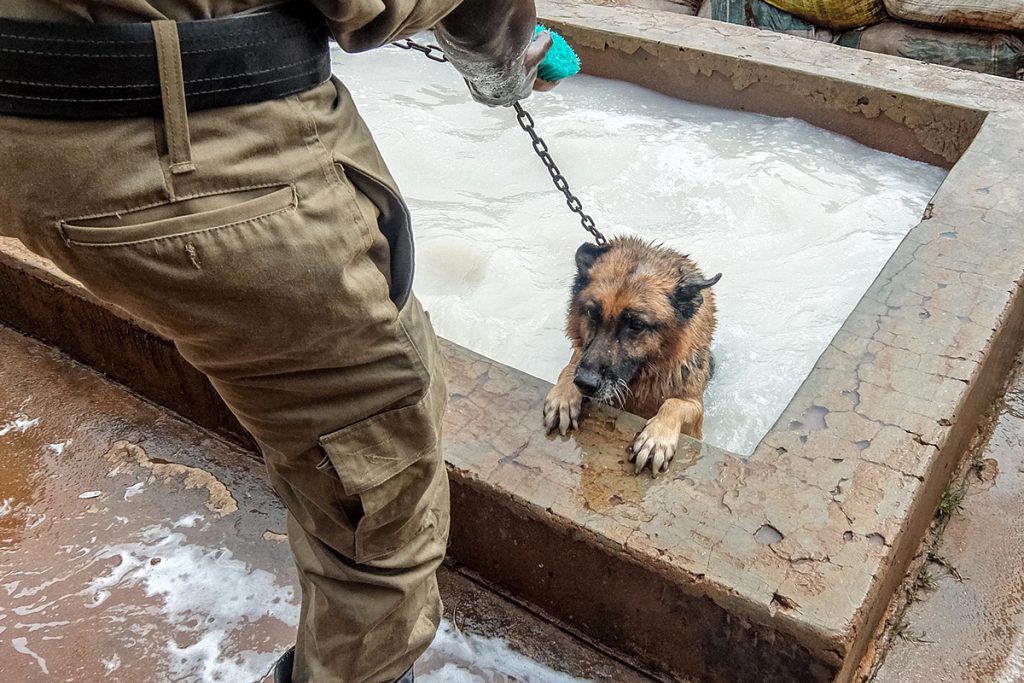 Innocent Kinyera says Jessy and other dogs at the facility are scrubbed clean twice each week in the dipping pool. In addition to the weekly cleansing, dogs must be put in the pool when they return from field operations, Kinyera adds. 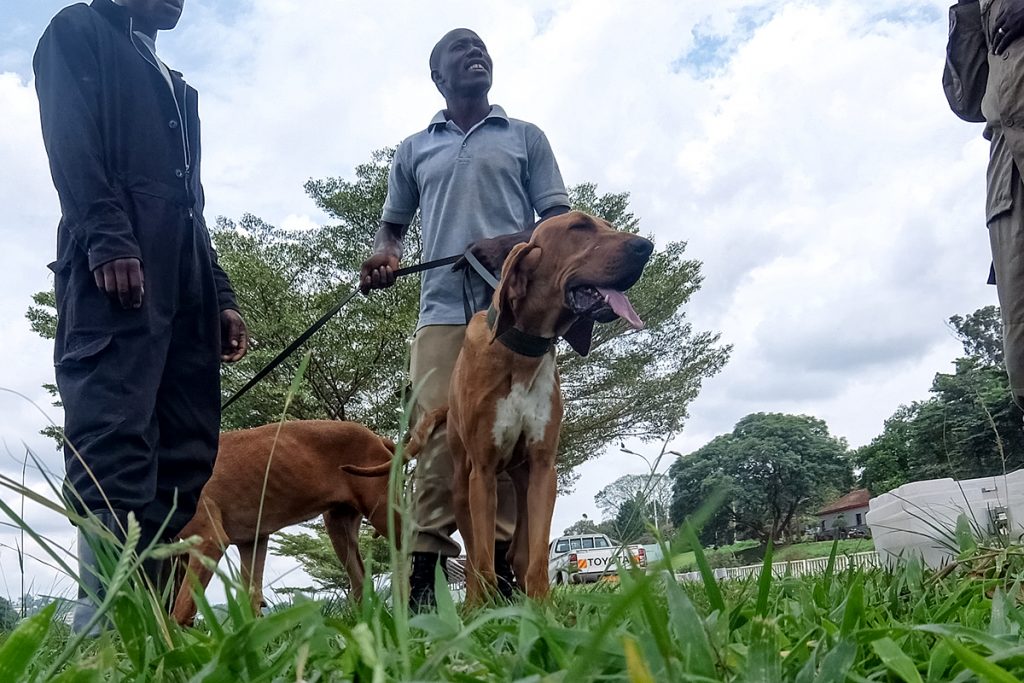 A team of training professionals at the Nsambya Canine Unit training facility teach dogs to find suspects in hiding, sniff out narcotics and explosives, and retrieve evidence from crime scenes. The training lasts one to two years. On average, officers train 15 dogs at a time. While most of the training takes place at the Nsambya Canine Unit training facility, there are times when the dogs are taken to different locations in the city. Detection dogs Lorenzo (left) and Glingo (right) receive training at the Kololo Airstrip Independence Grounds, a public square and tourist site in Kampala. Lorenzo and Glingo are bloodhounds, a dog breed popularly known for its abilities to track scents and for its droopy ears. 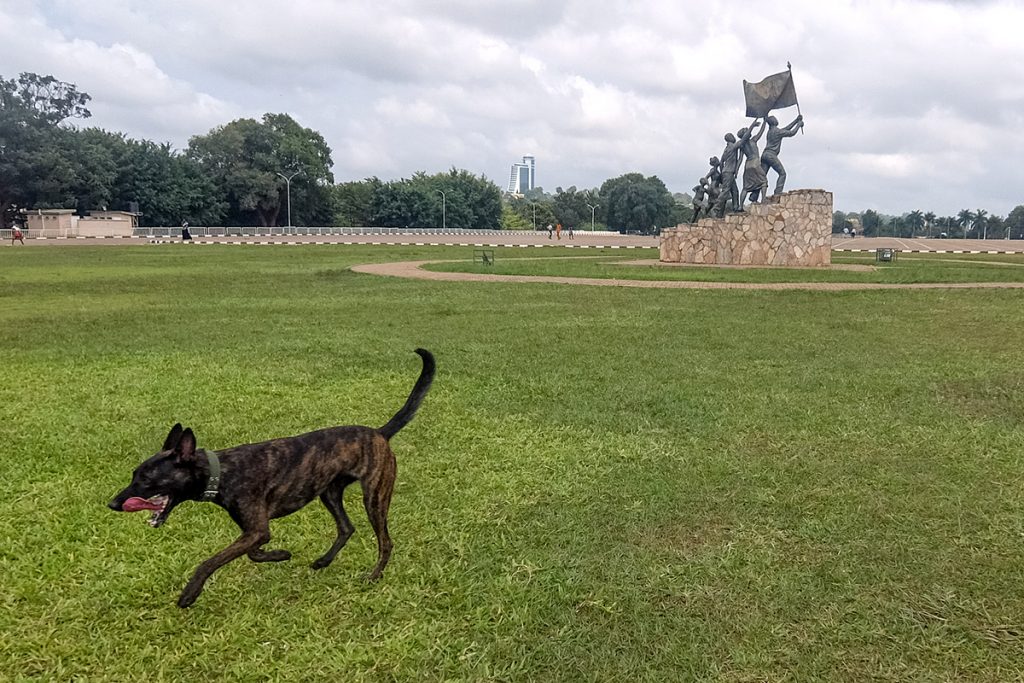 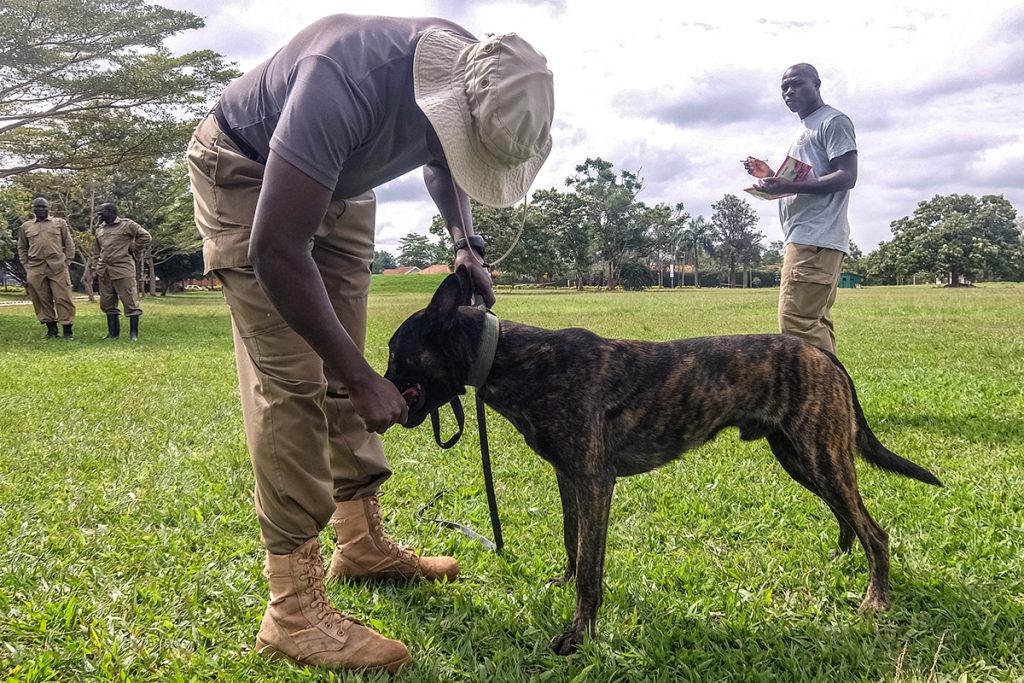 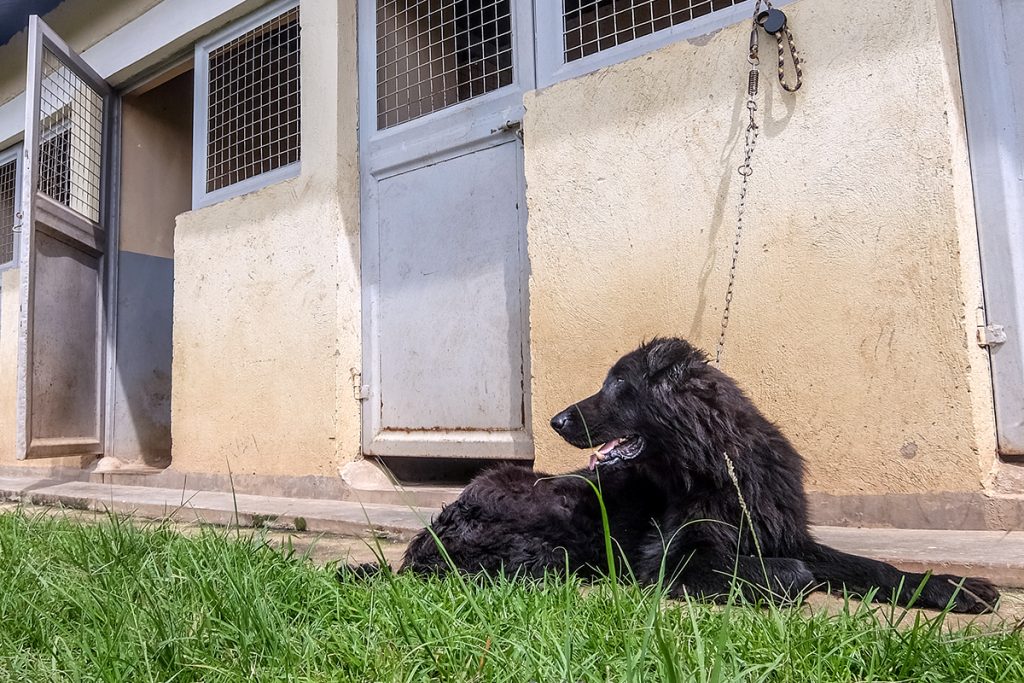 Buss, 10, sits outside of his kennel at the Nagalama Canine Breeding Centre. Buss is a retired detection dog who helped the police find explosives in multiple field operations. He has been at the breeding facility for two months now. 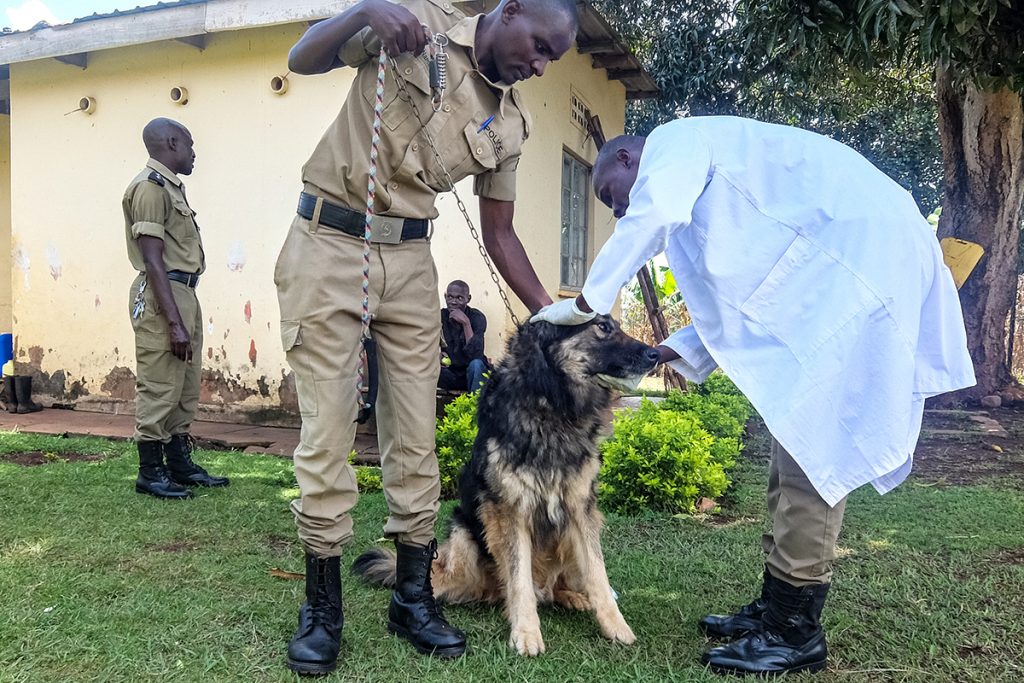 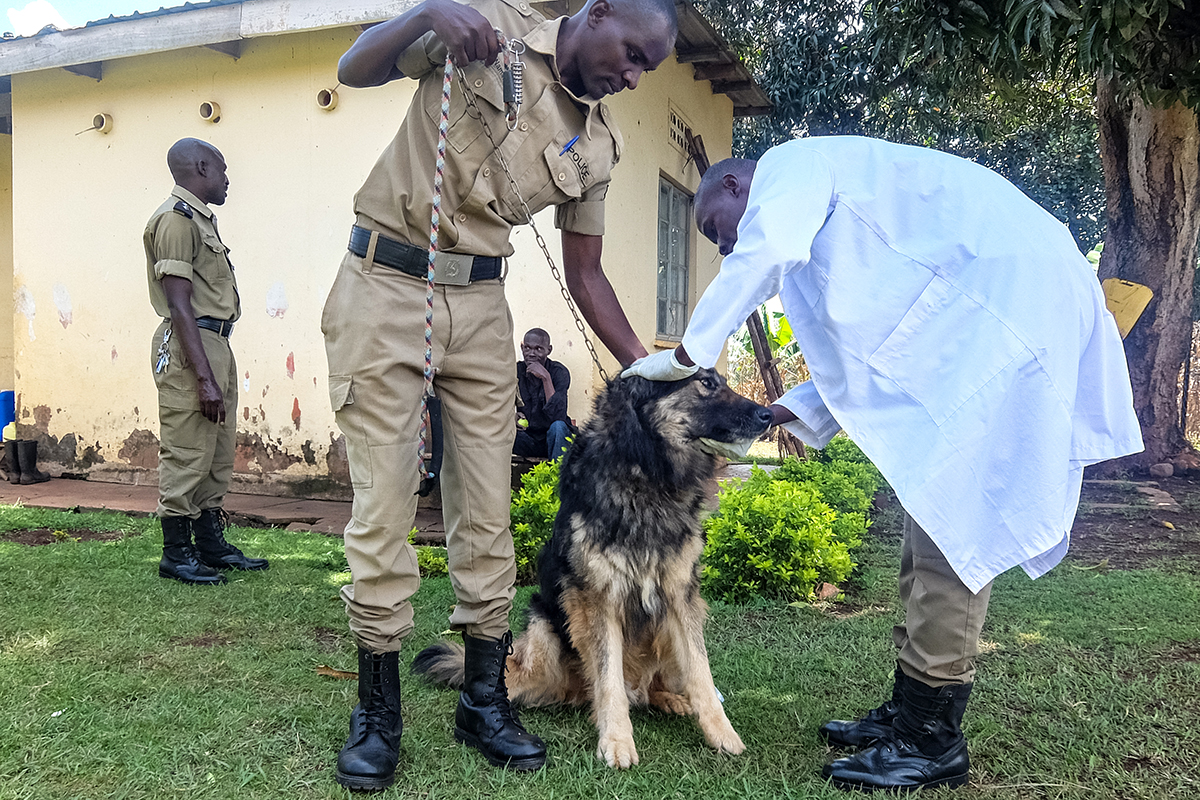 Officer Anderson Elungat (left) and Remegio Namanya (right), an officer and trainer, prepare to give Scooby a tablet that is meant to kill any parasitic worms living in his digestive system. Scooby, a 13-year-old German shepherd, takes the tablet twice a year. He served as a detection dog for many years but retired from field operations in 2015, because he lost some of his mobility due to his age, Namanya says. 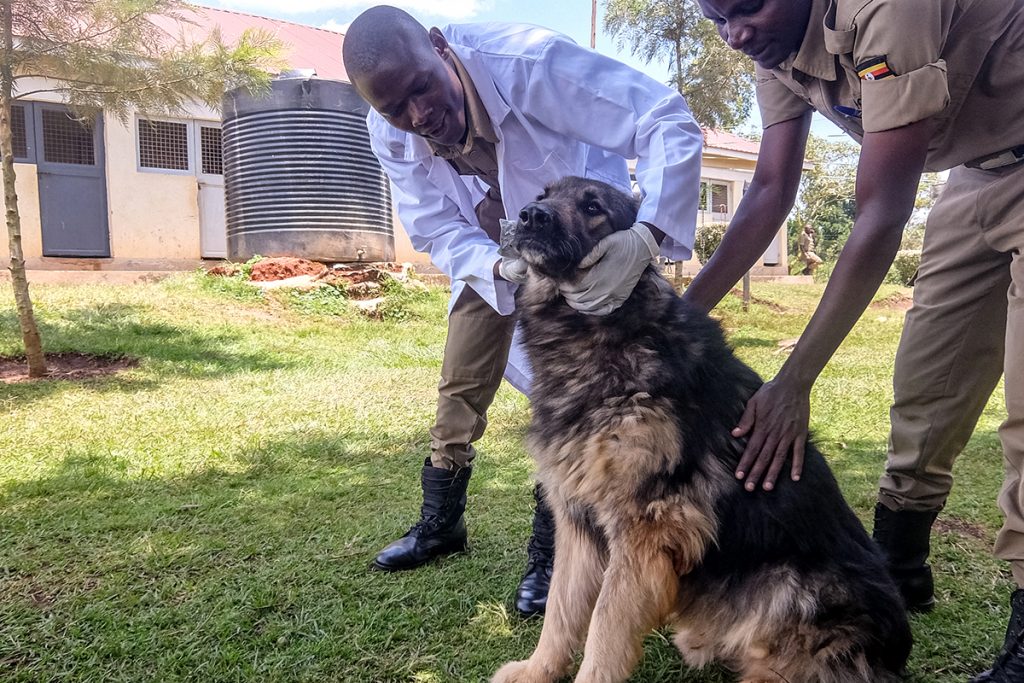 Remegio Namanya says Scooby doesn’t like taking his medication. To get Scooby to swallow the tablet, Namanya and his colleague Anderson Elungat tickle him. 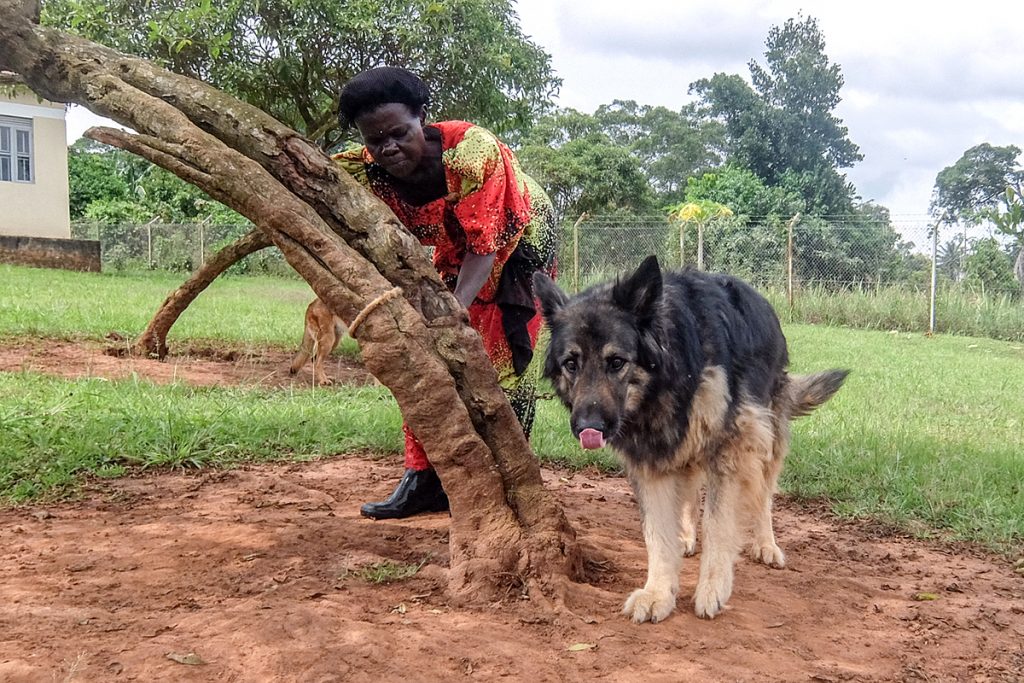 Deborah Nanteza ties Scooby to a tree so that she can clean his kennel. Shortly after this story was reported, Scooby passed away. He was the oldest dog at the Nagalama Canine Breeding Centre in Uganda’s Mukono District. Most retired detection dogs die from natural causes, Robert Napakol says. But in the rare case that a dog is extremely ill and in pain, they are euthanized, he adds. Napakol says those who knew Scooby will miss him dearly, but the force plans to expand its canine unit in the coming years.

Global Connection: New Dynamics in Police Work Around the Globe

This month, Global Press Journal reporters from Argentina, Uganda and Zambia explore how police forces in their communities are changing the ways that officers work. One police force is relying on a real-time crime map to curb violent crimes in urban areas, and another is breeding and training canine detectives to track down people who break the law. Read the Global Connection