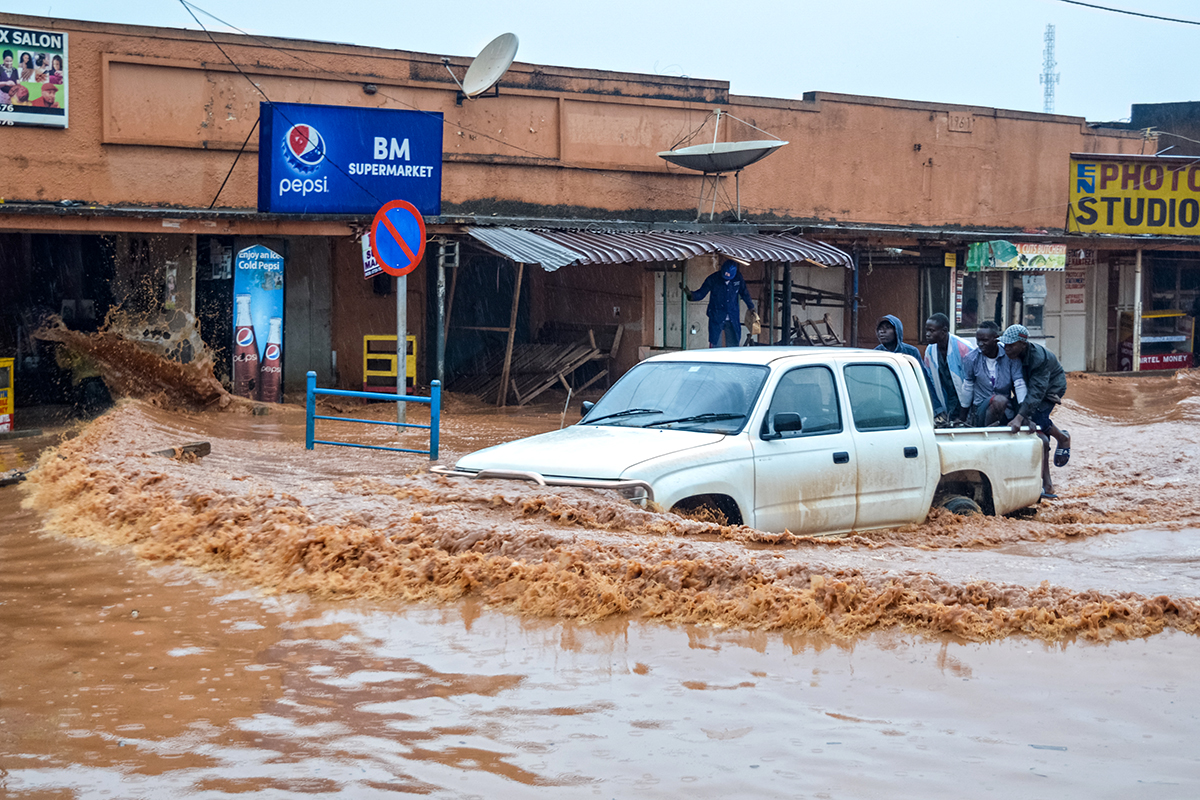 KAMPALA, UGANDA — It has been raining for hours.

In the Bwaise neighborhood, small lakes have formed along Nabweru Road, which is used by tens of thousands of people moving through the city everyday.

As the lakes widen and deepen, shops are forced to close. Fewer traders are open in the nearby food market, too. Taxis are parked, and bodaboda drivers are stuck with their motorcycles on either side of a fast-growing lake.

It’s clear that the water has no place to go.

Musa Byekwaso is getting impatient. He drives a boda boda, a motorcycle taxi that is common here. When a client offers to triple the fare if he will go through the flooded road, he agrees.

Byekwaso drives into the water, only to stop a few seconds later. It’s too deep. Byekwaso has to get off of his boda boda. The rider walks backwards to the edge of the growing lake. 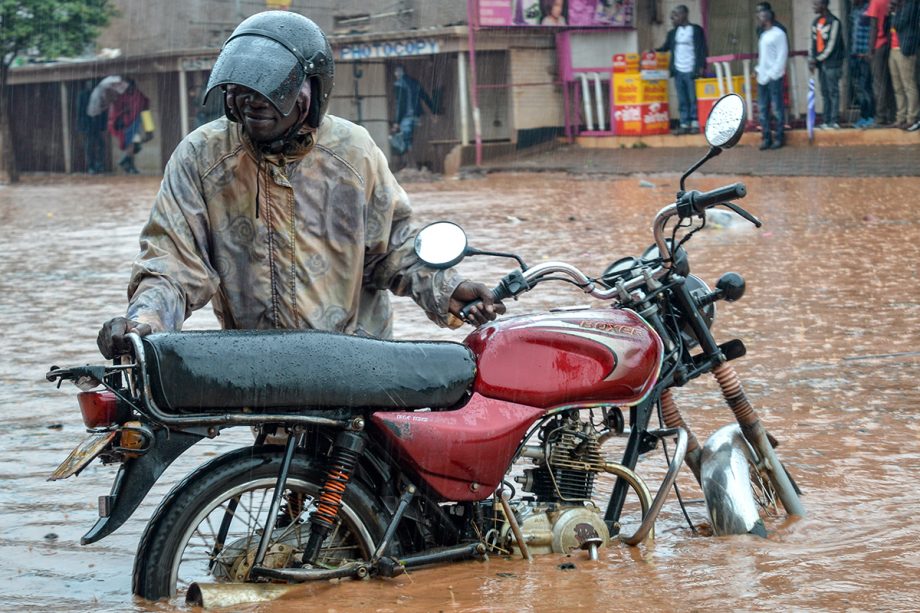 Musa Byekwaso struggles to get his boda boda out of the flooded portion of Nabweru Road in Bwaise, an urban area outside of Kampala, the capital city. Floods here are common during the rainy season.

“I had spent five hours doing nothing,” Byekwaso says, clearly frustrated. “So when she said she would pay me well to transport her to the other side of the floods, I thought this would be an opportunity for me to make some money.”

But the water was more of an obstacle than he thought.

“I thought I would really ride through that water because my boda boda is strong, but the floods were deeper and kept on pulling my boda boda to one side,” he says.

It’s not the first time that businesses in Bwaise have lost income due to floods. Byekwaso says he can earn 60,000 Ugandan shillings ($16) on a good day, but during a flood like this he’ll likely make just 15,000 shillings ($4).

During the rainy season, the incomes of the estimated 15,000 people who work here are often affected because the neighborhood is notorious for flooding. Limited drainage and infrastructure in the busy business district can be attributed, in part, to informal settlements that have sprung up here since the 1980s.

Simon Kawesa, spokesperson for the office of the mayor of Kawempe Division of Kampala City Council Authority, says flooding has been a problem in this area every March since the late 1980s.

The root cause, he says, is informal construction without proper city planning. The neighborhood has only narrow, garbage-filled drainage channels.

“Bwaise was originally a swamp that gathered water from several different parts of Kampala, filtered it before it ended up in Lake Victoria. But because the swamp has been destroyed, settled in without proper housing planning, it floods when it rains heavily,” Kawesa says.

The informal buildings mean that the Bwaise neighborhood is considered a slum by locals and officials alike. Flooding and other challenges increase each year, thanks to the rapidly growing population. An estimated 60 percent of Ugandans live in similar urban neighborhoods, according to a national proposal to “empower slum dwellers.” But with the population urbanizing at more than 5 percent per year, infrastructure challenges are only increasing.

Residents say it’s unclear why the city has not invested in infrastructure development for this recurring problem. 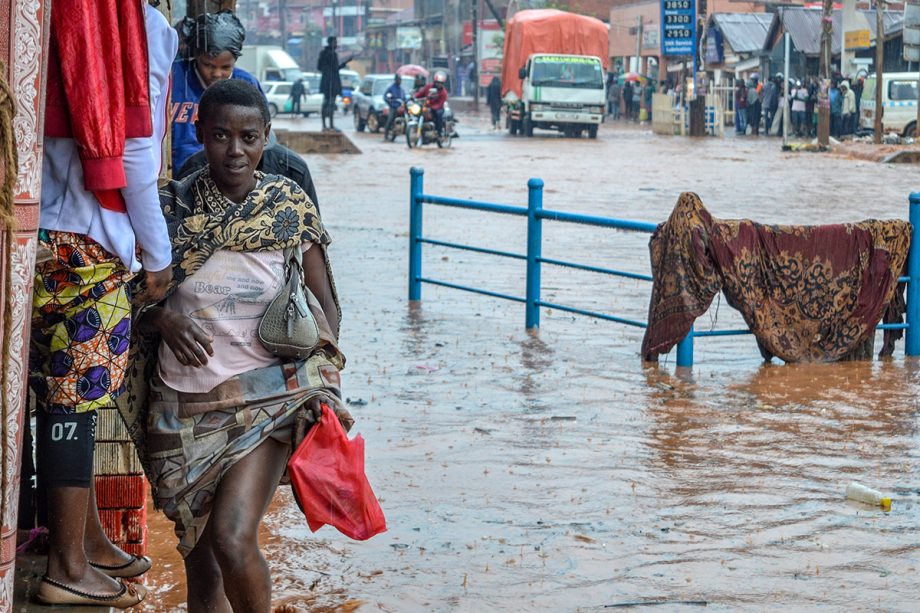 Ivan Kitenda sells traditional crafts and worship items in the area. He says when it floods not only does he lose customers, but the water can get so high it comes inside his shop, ruining some items.

“When it rains and floods in the night, and I am not in the shop, water floods into my shop and destroys my craft baskets,”he says.

Solomy Naggilinya, a trader of matooke, a popular type of local banana, says each time it floods she expects fewer customers.

Naggilinya blames the floods on the narrow drainage system in Bwaise.

“The main water drainage system in Bwaise can’t hold all the water when it rains, and the local leaders are not doing enough to address the issue,” she says.

The mayor’s office is developing a strategic plan to address the flooding, Kawesa says. One strategy might be to relocate people from the overcrowded neighborhood, he says.

In the meantime, he says citizens need to take responsibility for dumping trash in the streets, clogging the already small drains.

“People dump garbage into the drains, filling them up, so when it rains the water doesn’t have anywhere to flow, so it floods,” he says, adding that neighborhood leaders should take control of the garbage problem.