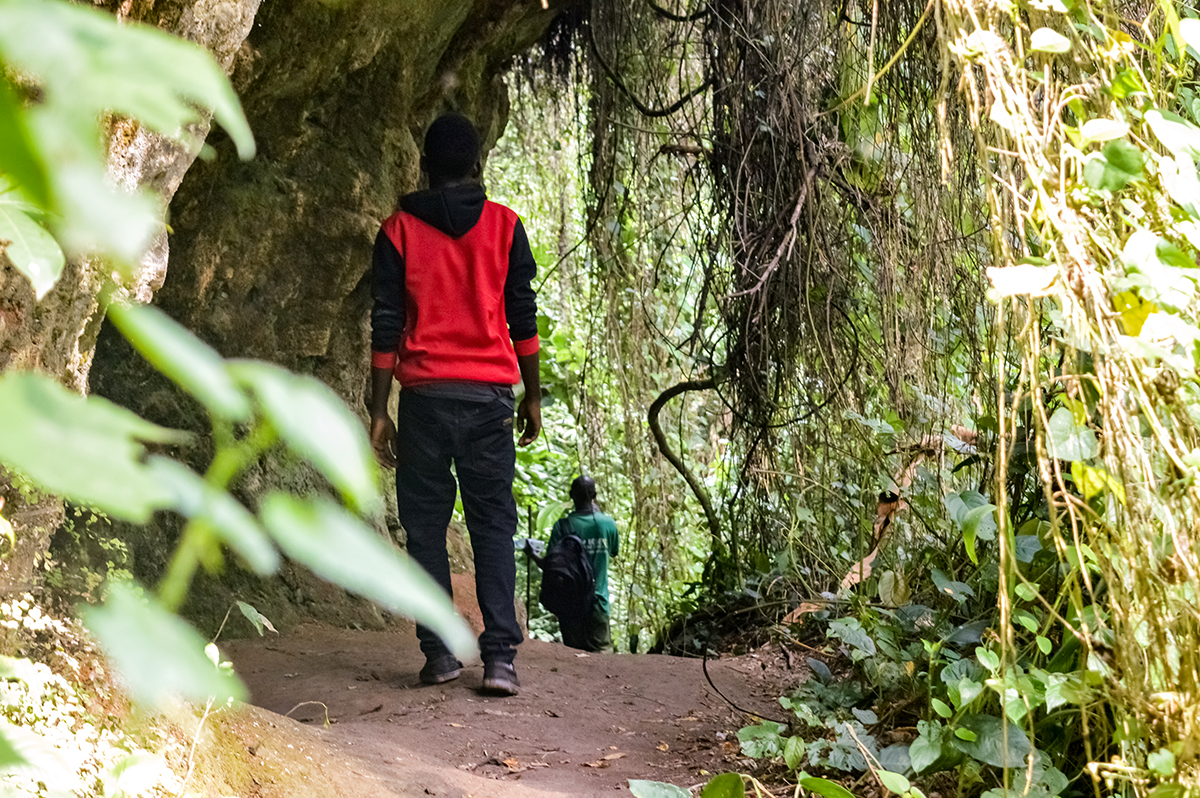 FORT PORTAL, UGANDA— Through a campsite, one goes deeper into the ancient caves. The sound of birds accompanies the spluttering of a waterfall.

This is the site of the Amabere Ga Nyinamwiru caves, where the music of the jungle birds and waterfalls is spellbinding. Not far from here, roughly 10 kilometers (about 6 miles), lies the town of Fort Portal.

Unlike other waterfalls, these falls are special. They are not violent.

There is a tropical forest full of rare species of trees. A tangle of plants, which provides a canopy of vegetation, is difficult for the eye to penetrate. The sun goes through a similar struggle to cast its rays to the earth.

In an otherwise sparse landscape, the site of Amabere Ga Nyinamwiru emerges as a distinctive – and very green – place. 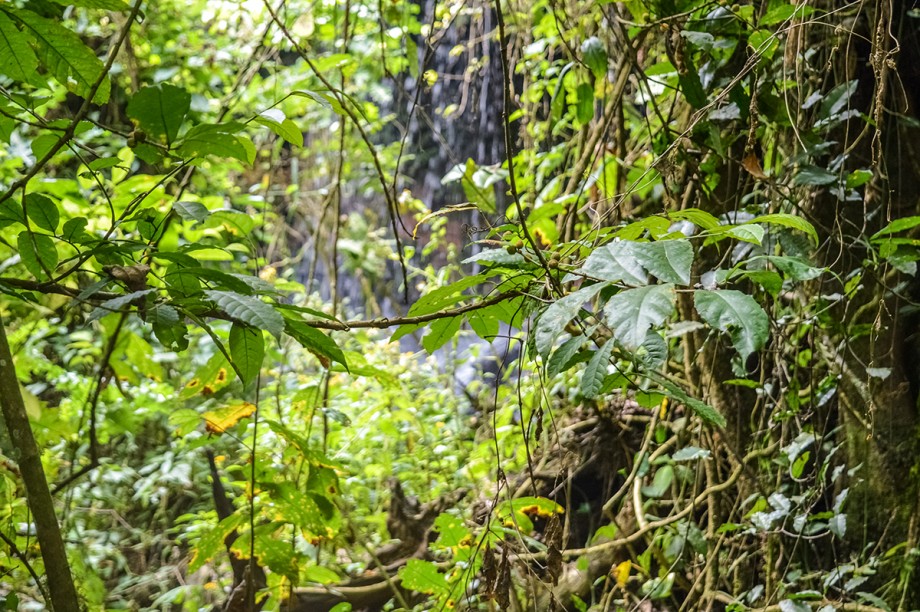 A variety of forest plants guard the entrance of the Amabere Ga Nyinamwiru caves.

Inside, deep in the caves, an equally impressive sight awaits. Here, there are natural limestone formations in the shape of human breasts, which have nipples reminiscent of a dog’s teats and a cow’s udder. During the rainy season, the formations drip milk-colored water, which is why the caves are called Amabere Ga Nyinamwiru, “the breasts of Nyinamwiru”, in Swahili.

Two theories explain the existence of the breast-like formations in the caves.

Wilson Isingoma, the tour guide at Amabere Ga Nyinamwiru, begins with a scientific explanation. He says that sedimentary limestone rocks caused the formations. Because the limestone rock is porous, when water passes through the cave ceiling, the soil dissolves in calcium bicarbonate. When the water emerges, the carbon dioxide evaporates, leaving behind calcium carbonate, which solidifies on the upper surface of the cave and forms hanging formations, known as stalactites. Some water drips on the floor and eventually forms features on the ground, called stalagmites.

The dripping water, which is rain water, is referred to as cold springs because it enters the caves from underground, which makes the water temperature exceptionally cold. 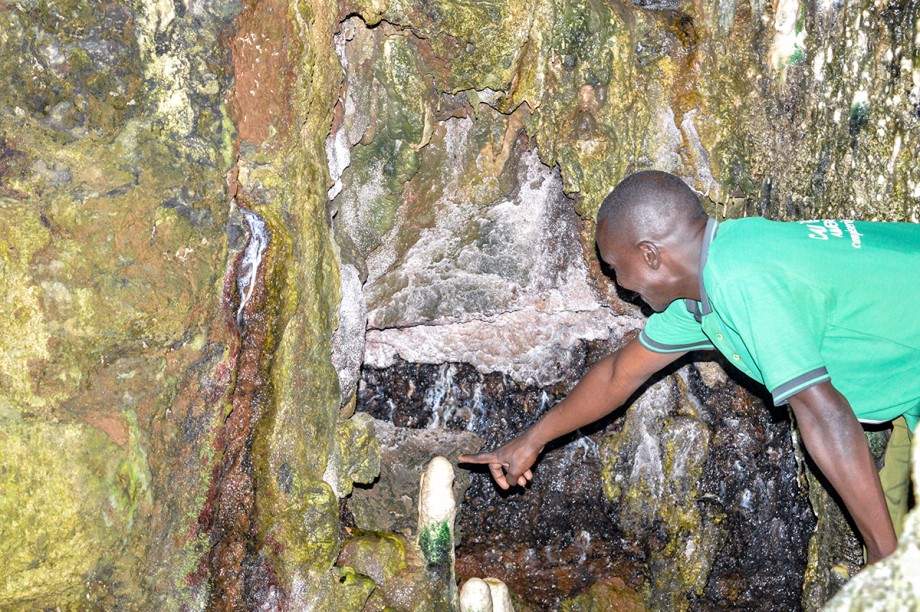 Isingoma points to the formations for which the Amabere Ga Nyinamwiru caves are named.

As time goes on, the compositions solidify and become hard rock. With time, the dripping and depositing continues, and pillars begin to form.

Princess Nyinamwiru
The second theory is a legend, which Isingoma narrated during the tour of Amabere Ga Nyinamwiru.

As the story goes, the area was ruled by the clan of the Batembuzi Empire, which would later become the Bachwezi Empire. The descendants of the Bachwezi would eventually found the Bunyoro Kingdom.

When the last king of the Batembuzi Empire vanished, a man names Bukuku took over the throne. Bukukuhad a beautiful princess, Nyinamwiru. But he had been told through an oracle that his daughter would get pregnant and produce a child that would take over his throne. Bukuku decided he would not allow the oracle’s prediction to come true.

He asked his wise men for advice on how to kill his daughter, and the wise men advised him against it. Instead he decided to deform her by chopping off one of her breasts, and plucking out one of her eyes toward off potential suitors. 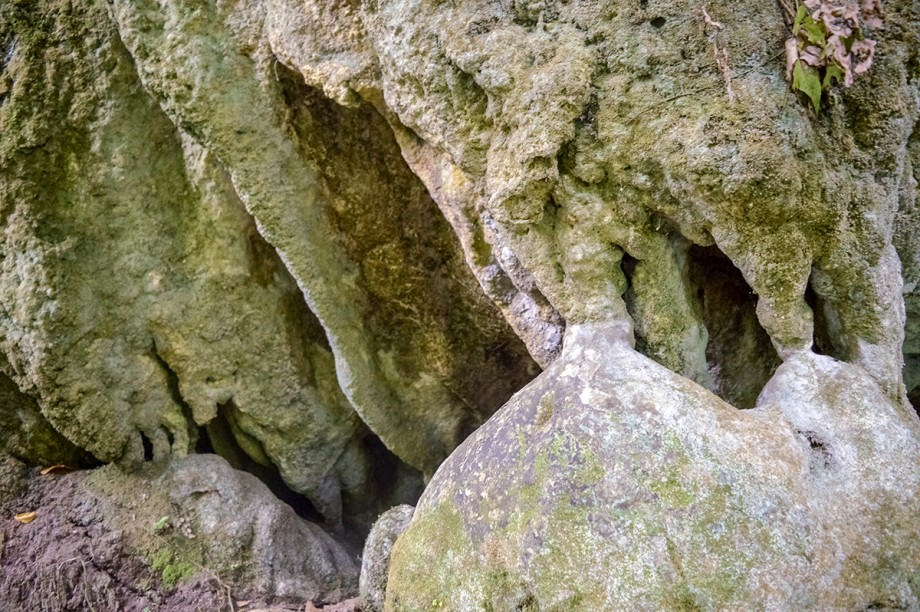 The Amabere Ga Nyinamwiru caves are made of limestone. Inside the caves, the breast-like features inspire visitors to travel from around the world to witness the drip of water, tinted white by limestone, from the tips of the formations.

But, Nyinamwiru persisted. With the aid of her palace maids, she organized for her lover, Isimbwa, who was believed to be a god, to sneak into the palace. Three months later, Nyinamwiru was pregnant. By the time Bukuku learned the news, Isimbwa had already run away.

The king decided that if his daughter produced a boy, he should be killed. If she gave birth to a girl, she should be made a servant in the palace court.

Nyinamwiru gave birth to a boy, whom the maids immediately whisked away and hid in the jungle, on the banks of Amabere. Lumumba, a clay potter, discovered the baby and searched for his family. He informed the palace that the child was still alive. Upon hearing this, Nyinamwiru sent the porter a cow, whose milk she believed would keep the child alive.

In the wet season, the breast-like formations drip because the water, as explained by Isingoma, drips through them. Due to the limestone soil, the water looks white and causes many to believe it is milk, reinforcing the story of Nyinamwiru and her exiled son.

Nyinamwiru’s son eventually took the throne, as the oracle had predicted.

Today, the caves are a popular tourist attraction for both foreigners and Ugandan citizens. On average, Isingoma says, the site receives about four tourists per day. He adds that many school children come here for geography and chemistry field work lessons throughout the year. 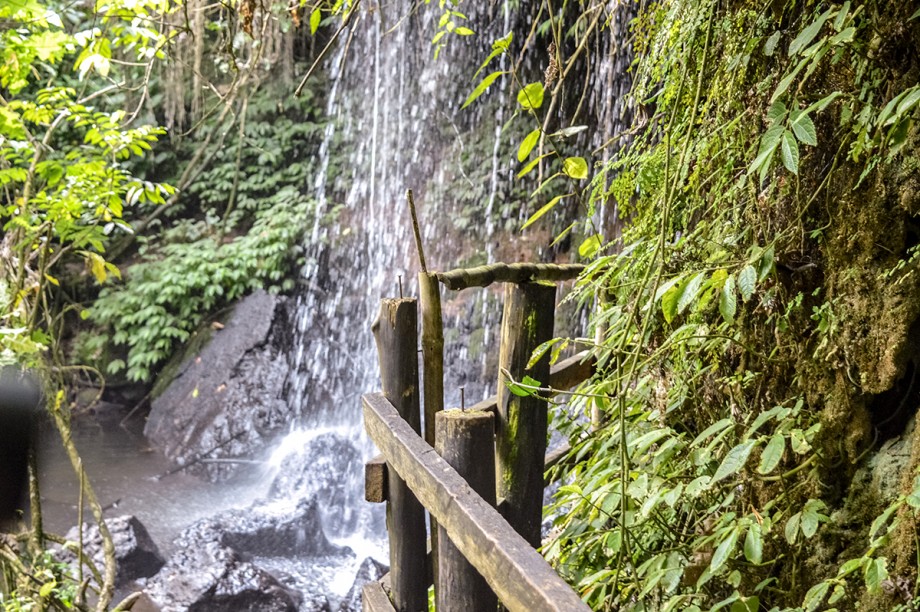 Hidden in a thick forest in Uganda’s Kabarole District is the historic site of the Amabere Ga Nyinamwiru caves. A rushing waterfall, a natural pool and a canopy of plants welcomes visitors at the entrance of the caves.

Visit Amabere Ga Nyinamwiru
From the capital city of Kampala, one can opt to take a bus or taxi to Fort Portal. It is between a five- and six-hour ride from the city, depending on the speed and condition of the vehicle. Transportation can be arranged easily; the earliest vehicle leaves at 6 a.m. and continues to leave on the hour until 7 p.m.

Upon arrival in Fort Portal, the caves are 6 kilometers (about 4 miles) away, on Bundibugyo-Lamia Road.