Skip to main content
The story you are reading was published on Thursday June 1, 2017. To read more recent stories click here. 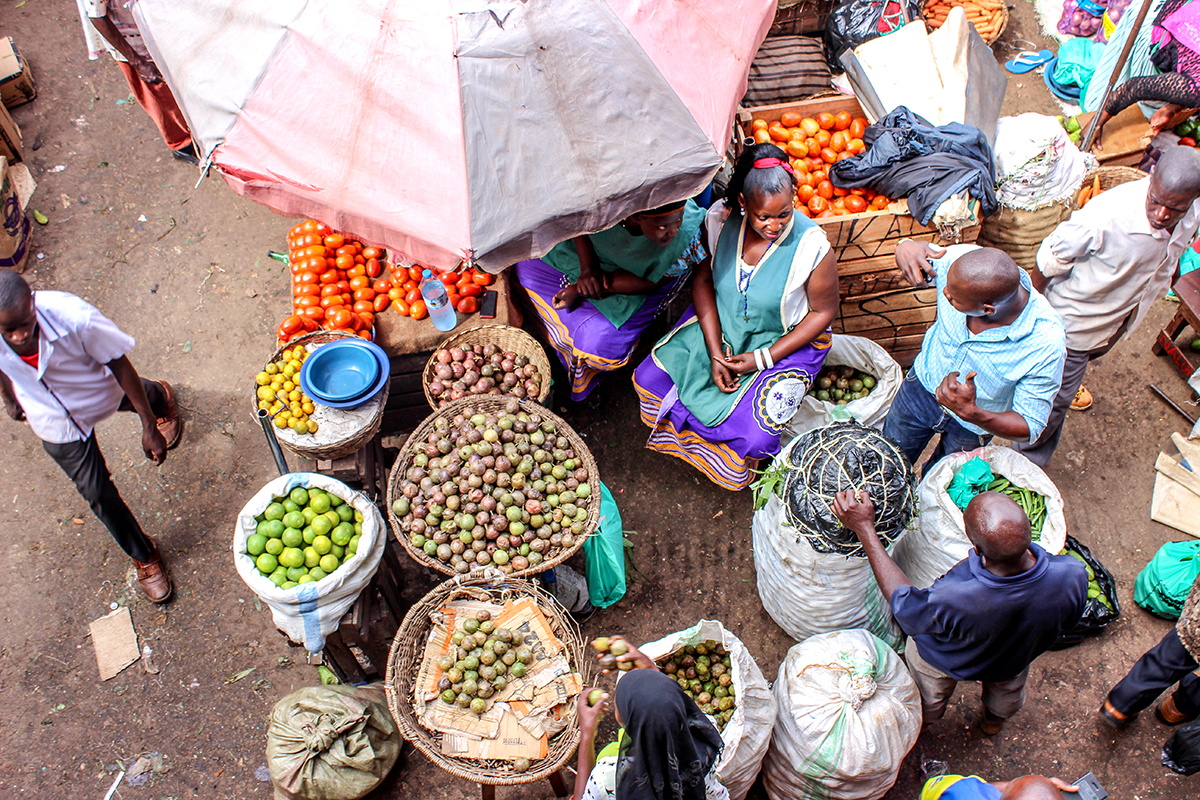 KAMPALA, UGANDA — It’s 9 a.m. in Kampala, Uganda’s capital. The steady stream of boda bodas, or motor taxis, that often bring chaos to the early morning traffic, has subsided. It’s the perfect time of day to tour the city’s historic sites.

Kampala is a dynamic place, full of attractions that will keep any visitor occupied for a number of days. With so much to experience, one of the many ways to see the city is to simply walk around.

Begin your walk at the general post office, Post Bank, on Kampala Road. From here, take a left turn to the roundabout on Speke Road where Sir Edward Mutesa II presidential monument is located. This monument was put up to commemorate Sir Edward Mutesa II, the 35th king, or kabaka, of the Kingdom of Buganda and the first president of independent Uganda, in recognition of his contribution to Uganda’s struggle for independence from Britain, which was achieved in 1962.

Adjacent to the monument is the Independence Monument.

The Independence Monument
Six meters (nearly 20 feet) tall, the Independence Monument commemorates Uganda’s independence from Britain. Its construction was funded by the British colonial administration. The monument depicts a woman unwrapping a child and raising the child to touch the sky, and symbolizes the birth of a new nation, set free from colonialism. 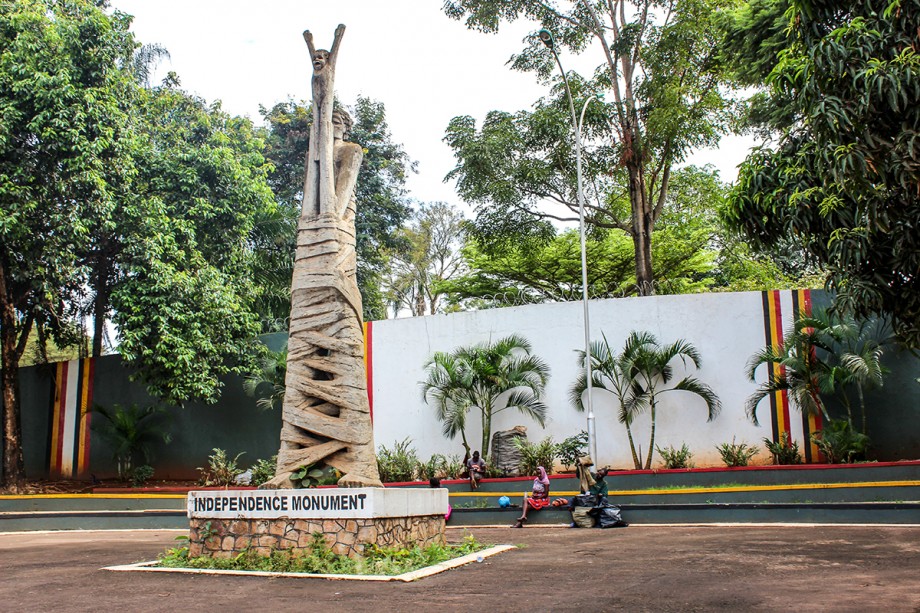 The Independence Monument, located in the heart of Kampala, was designed by artist Gregory Magoba.

Nakasero Market and the Old Taxi Park
From the Independence Monument it’s a short distance to Nakasero Market, where there is an abundance of local fruits such as jackfruit, pineapples and watermelon, among other food items, for sale.

The Old Taxi park is a place where you will find over 3000 matatus, privately owned shared taxis, and buses cramped in a small space. For many, the first experience at the old taxi park is overwhelming, as the amount of vehicles makes it a difficult place to navigate. It is, however, the central place for transportation to any part of Uganda.

People often come to the park just for a glimpse of the scene, as it is truly a unique sight. There’s no limit to the amount of activity you can witness here — it’s busy all week —and despite being referred to by some people as “the worst thing to ever happen to Kampala,” it’s a popular destination for a number of tours.

It’s “a view that is hard to leave,” says Zulaika Birungi, a Ugandan that started Kampala Walk Tour, a tourism company that offers a more interactive experience of Kampala. This spot is so catchy that one would want to stay here all day and just look at the activity, Birungi says.

Kampala Central Mosque
After a stop at the Old Taxi Park, it’s a walk to the popular Kampala Central Mosque, locally known as Gaddafi Mosque. The largest mosque in Uganda, and the headquarters of Islam in Uganda, Gaddafi Mosque is the second largest mosque in Africa. The late Colonel Muammar Gaddafi of Libya financed the completion of this mosque, and joined a number of other African heads of state in Kampala on May 18, 2008 for the building’s inauguration. 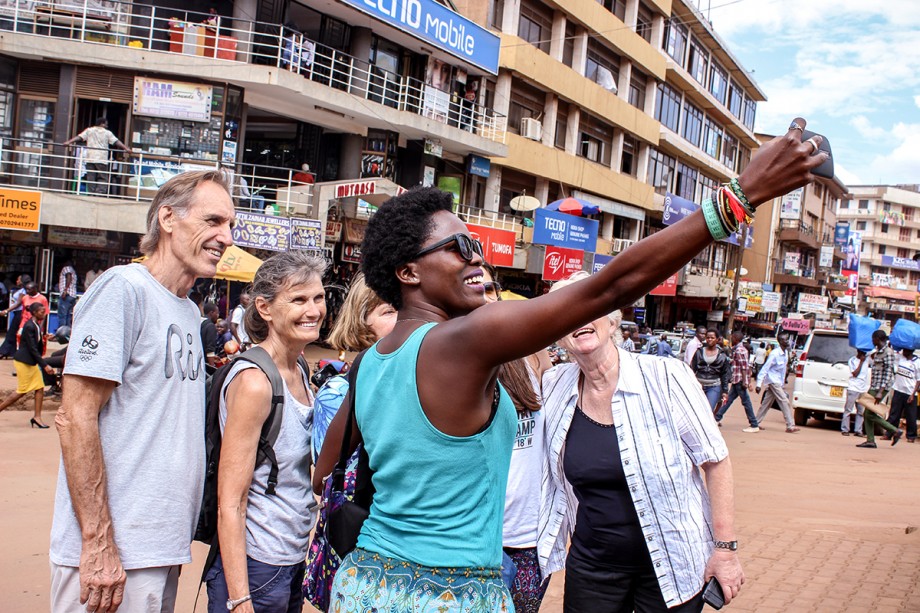 Zulaika Birungi (front), the founder of Kampala Walk Tour company, takes a selfie with her tour group. Birungi’s company aims to show a different side of Kampala by encouraging visitors to explore the city by walking it.

Mengo Palace, also known as Kabaka’s Palace
The former home of the King of Buganda, Fredrick Walugembe Mutesa II, Mengo Palace was built in 1922. After kingdoms were abolished by Uganda’s first Prime Minister Milton Obote in the 1967 constitution, and the Republic of Uganda was formed, General Idi Amin’s troops attacked the palace, causing the former King Fredrick Walugembe Mutesa II, to flee the country. He lived the rest of his life in exile, until his body was returned to Uganda for burial, upon his death.

The history of the palace during Idi Amin’s rule is a harrowing one. Amin’s eight-year-rule in Uganda is notable for its brutality — in particular, for committing some of the worst atrocities and human rights violations in the country’s history.

Visitors to Mengo Palace are not permitted to enter the palace, but are allowed to walk along a trail where the underground torture area, or prison, was located. A number of guided tours occur here, and a walk inside is enough to give one chills.

Within the underground tunnel, the voice of each tour guide echoes in the quiet. Foot and handprints of prisoners are imprinted along the chamber walls, as it was a daily struggle for the prisoners to breathe within the poorly ventilated rooms, says a tour guide. On the walls outside the torture rooms are the writings of visitors that lost loved ones during this era.

Bulange
Located 1.5 kilometers (about 1 mile) north west of the main gate of Mengo Palace is Bulange, which houses the Buganda Parliament.

Guides share the history of Uganda as well as the founding of parliament during frequently held tours. If parliament is in session, tour participants are able to witness the debates — silently, of course.

Kabaka’s Lake
The Lake was established by King Mwanga II to serve as an escape waterway in the event of armed conflict with the British. To date it is one of the only excavated lakes in East Africa and one of the biggest of its kind — about 2 square miles (1,280 acres). At the lake people are free to walk around, purchase food from the snack stalls or sit under the trees beside the lake and birdwatch. 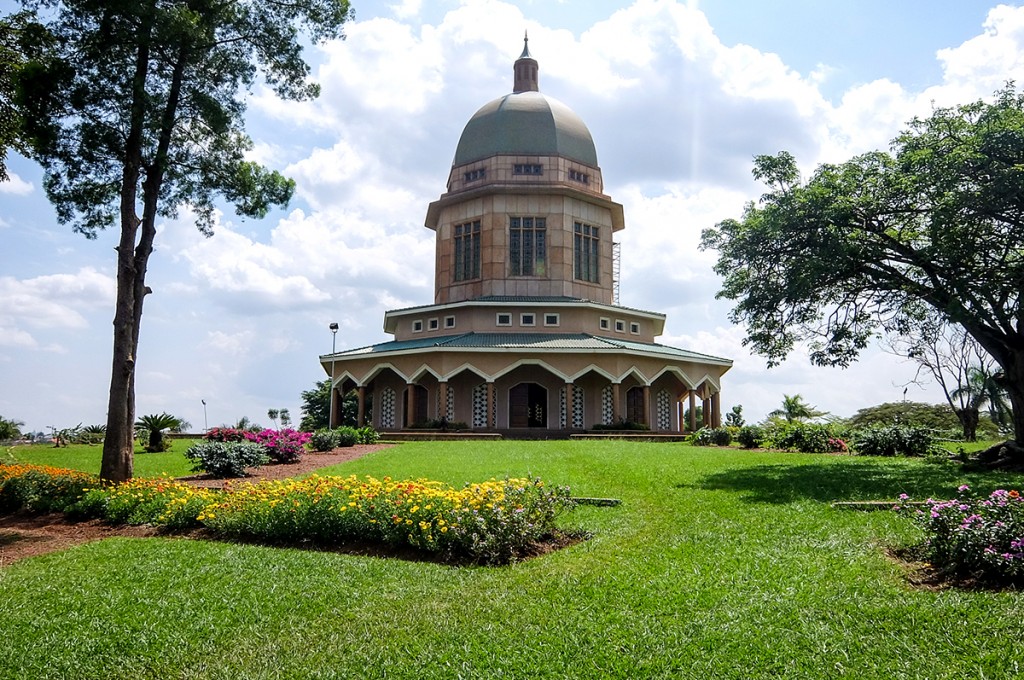 The Baha’i House of Worship, also known as the Baha'i Temple, is located on top of Kikaya hill. Many people visit the temple to learn about the Baha’i faith, to explore the grounds and to view the city. 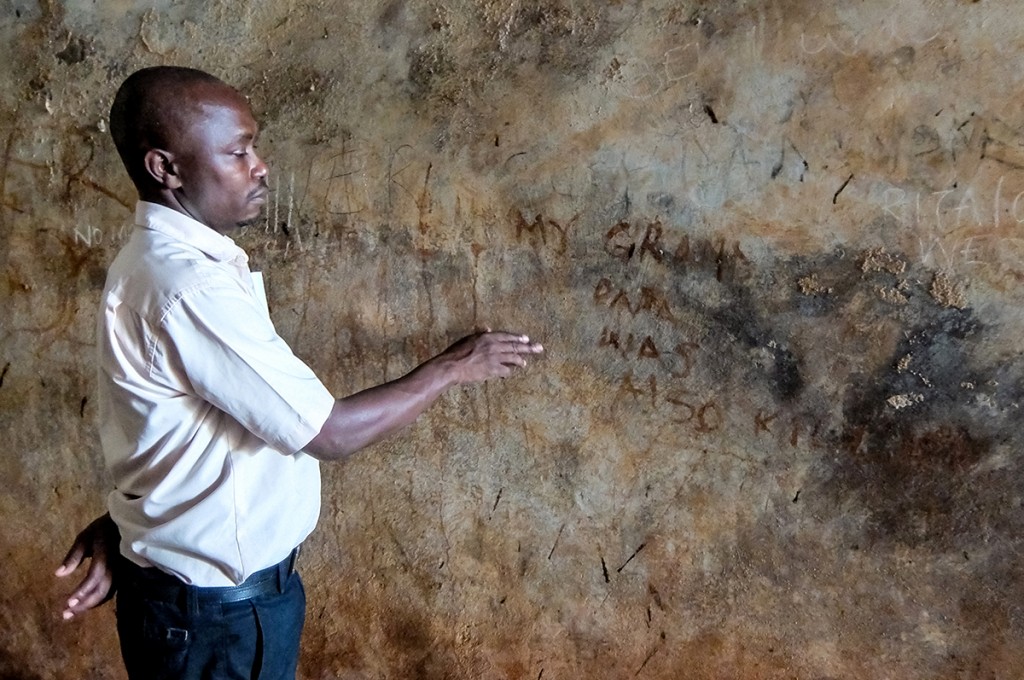 At Mengo Palace, a tour guide explains the markings and the writings on the walls of the prison and torture chambers, used during the rule of General Idi Amin in the 1970s. 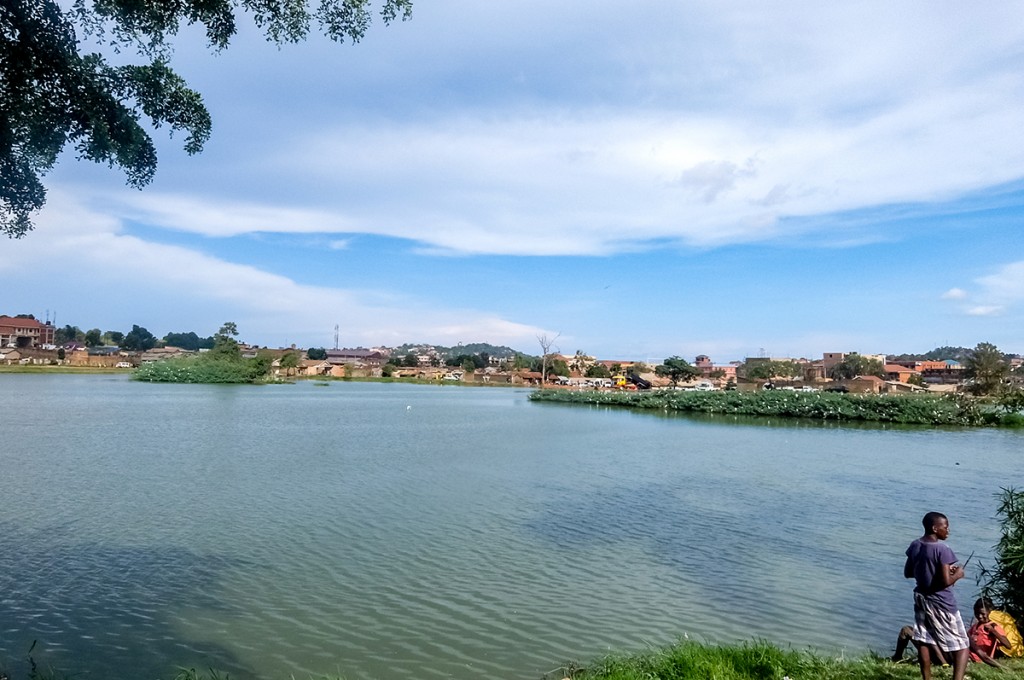 The manmade Kabaka Lake is a popular place for visitors to relax. It’s also home to a variety of bird species, such as egrets, which often settle on the small islands in the middle of the water. 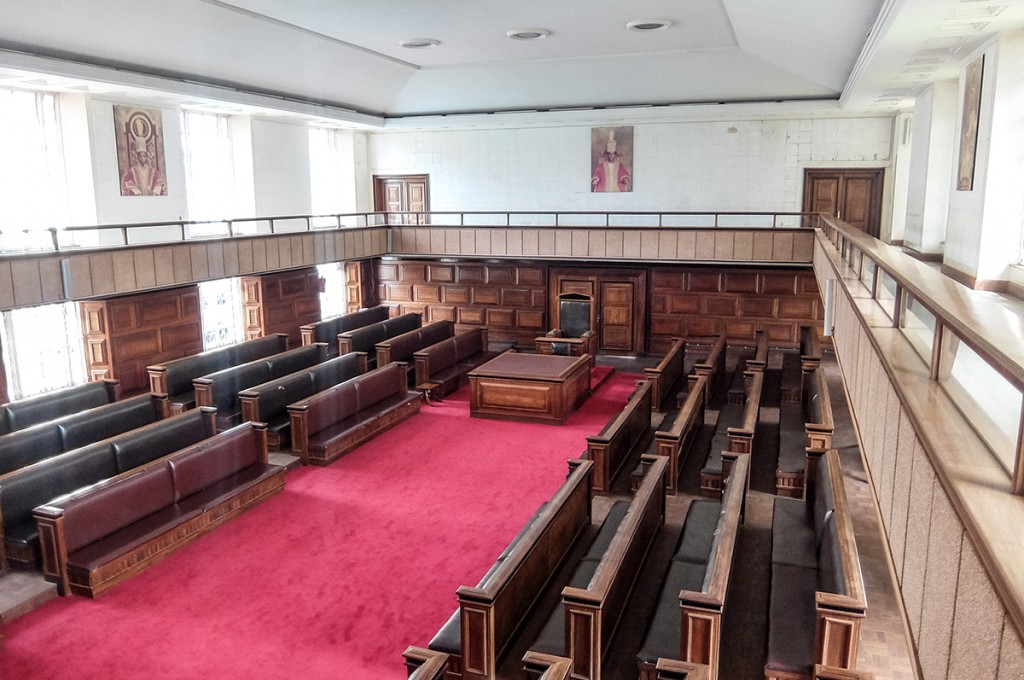 Lukiiko, or the Buganda Parliament, serves as the administration center of the Buganda Kingdom. Visitors can take a tour of Bulange, pictured here, where parliament meets. 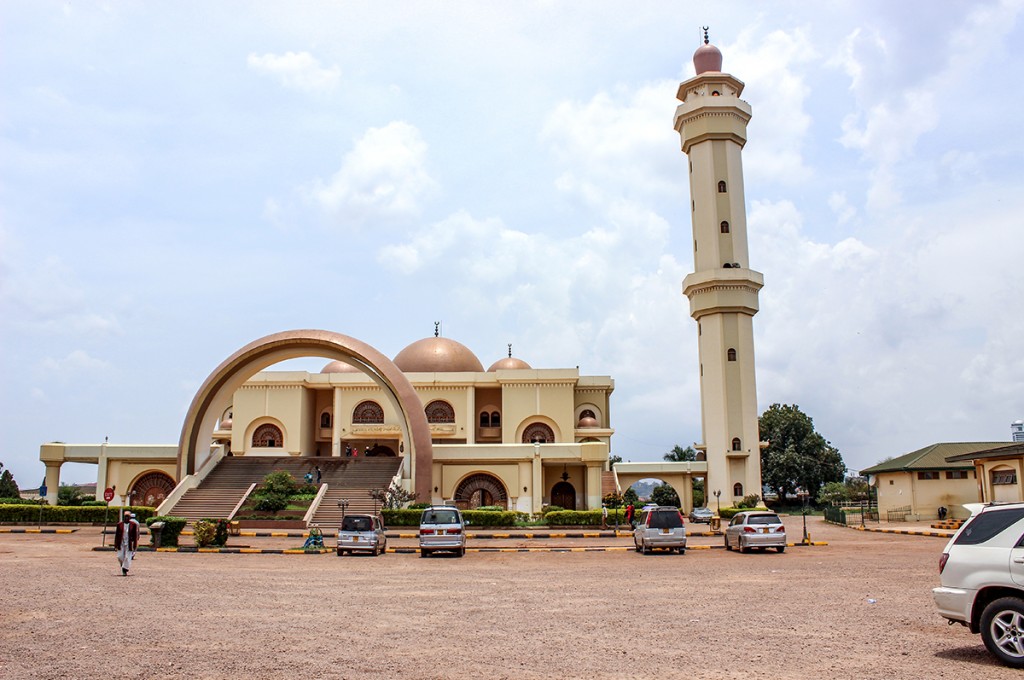 Gaddafi Mosque is named after the late Colonel Muammar Gaddafi of Libya, who helped finance the construction of the building. 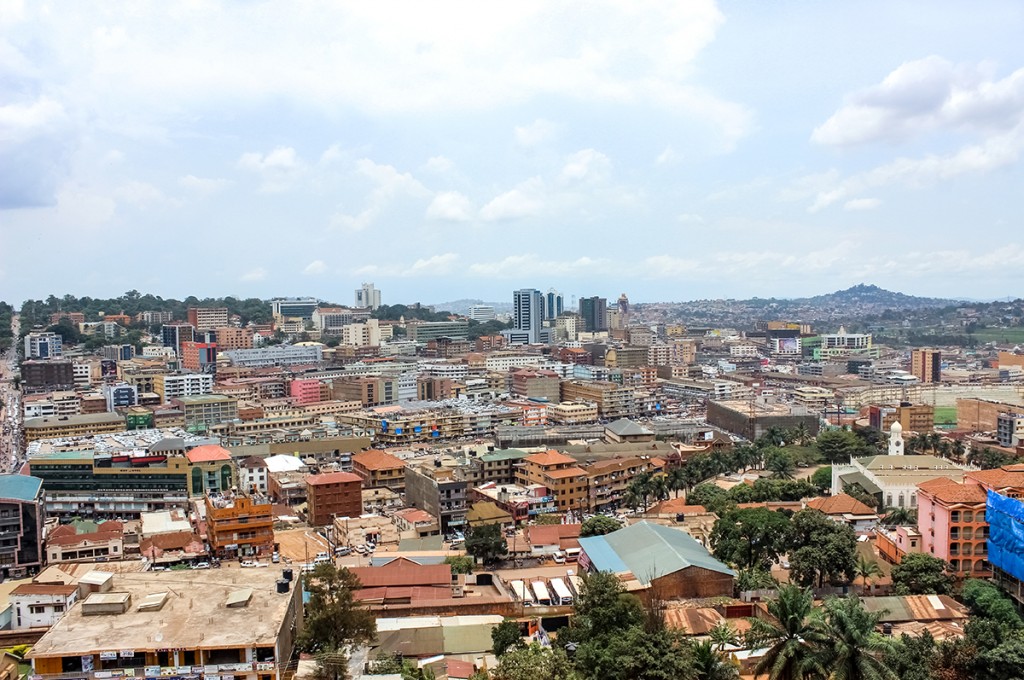 Many visit the mosque for worship and for the tremendous view of Kampala. 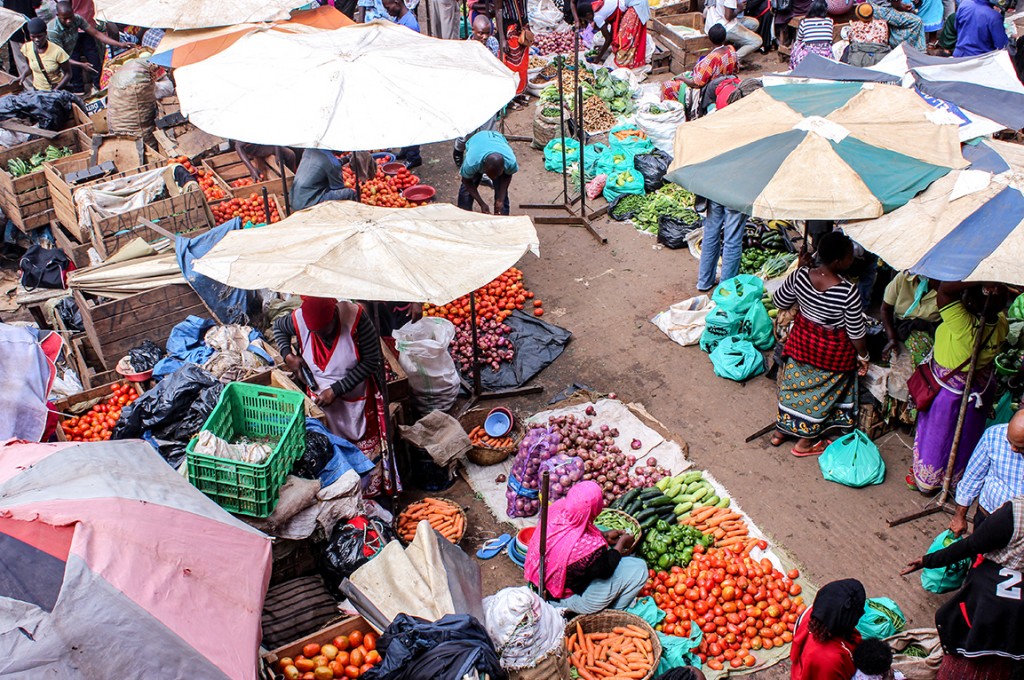 There’s no shortage of food stalls or fresh fruit and vegetable vendors at Nakasero Market. 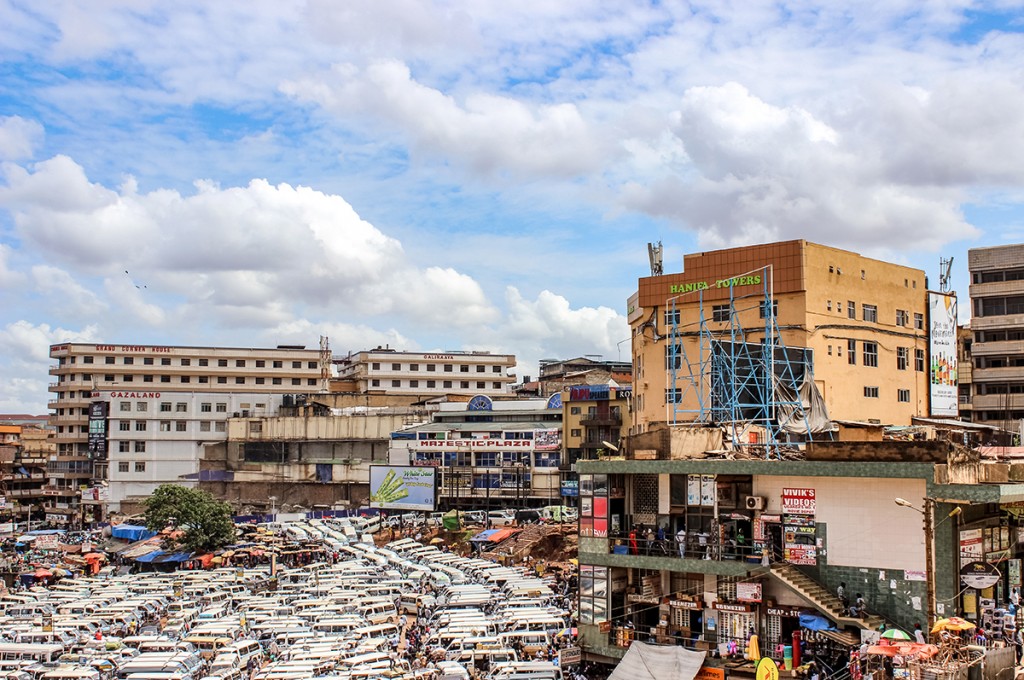 The buses, taxis and other types of vehicles found in Kampala’s Old Taxi Park makes it the place to go for transportation around the country. 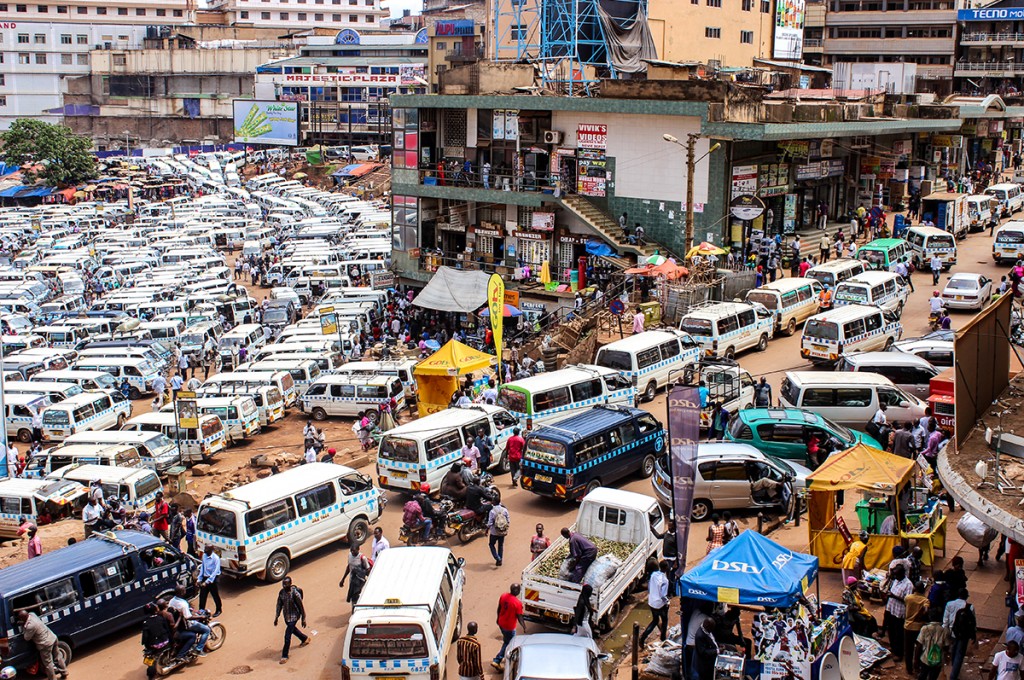 For some, Old Taxi Park is an overwhelming site, for others it’s a must-see destination.

Situated on 52 acres of lush land with beautifully tendered lawns, several species of trees and flowers, the Baha’i temple is known as the “Mother Temple of Africa.” Constructed in 1958, the temple sits on a beautiful spot on top of Kikaya hill. The magnificent dome structure of the temple can be spotted several miles away, from many parts of Kampala, from neighborhoods such as Makerere, Ntinda and Bukoto. One of the most natural places in the city, the temple attracts thousands of tourists from all corners of the world who come for a glimpse of the building, and another fantastic view of Kampala.

How To Visit Kampala’s Sites By Foot
Use this story and the map below as your guide or contact Zulaika Birungi and Kampala Walk Tour for more information. To arrange a tour call +256 774 596222 or email [email protected]