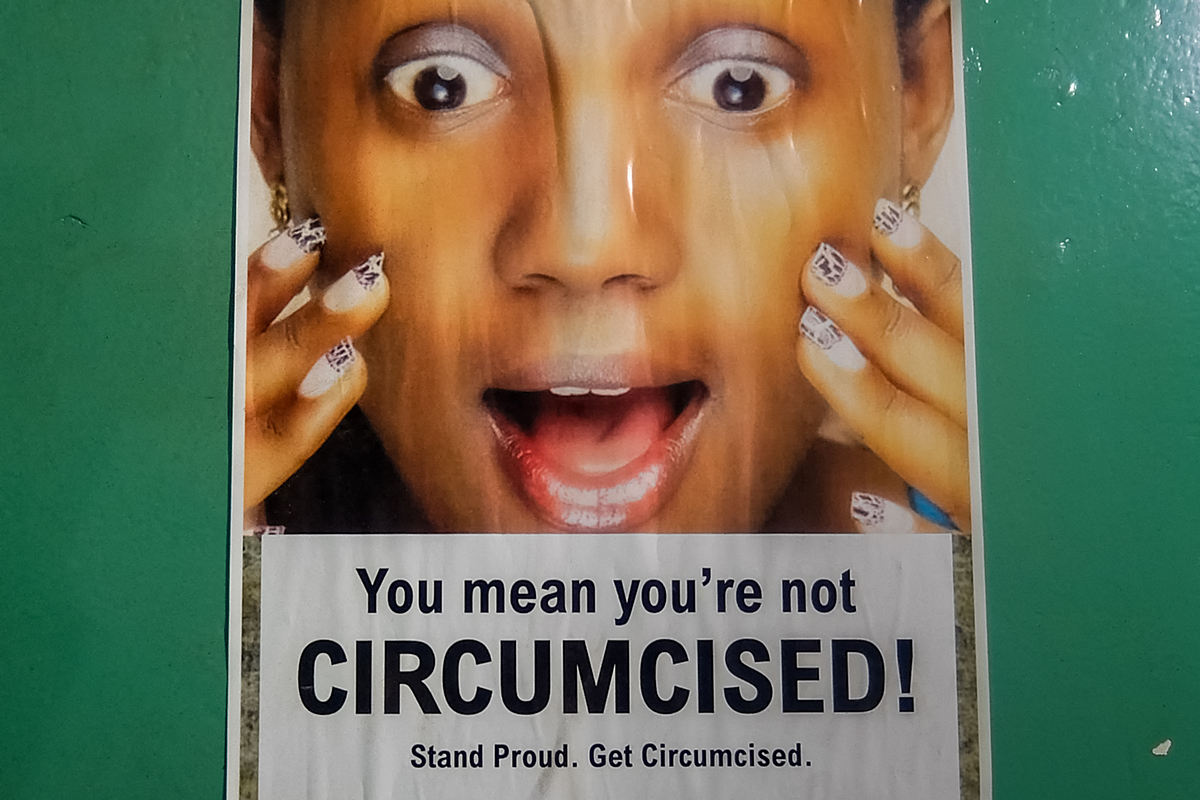 KAMPALA, UGANDA — After Jackson Kaggwa was circumcised as an adult, he started telling his family and friends all about the benefits of circumcision.

“After my circumcision, when I went back home and shared with my young brothers at home in Kawempe, six of them also underwent safe male circumcision,” Kaggwa says. “I was encouraged by the adverts saying that it reduces chances of acquiring HIV.”

The 19-year-old underwent what is known locally as safe male circumcision – the surgical removal of the foreskin of the penis by a qualified medical professional – in April. He’d seen billboards and heard radio and television ads with messages about why men should get the procedure.

Following recommendations in 2007 from the World Health Organization and UNAIDS that safe male circumcision should be considered a line of defense against HIV transmission, Uganda adopted its Safe Male Circumcision Policy (MCP) in 2010.

Dr. Steven Watya, a urologist working with the MCP, explains that the foreskin is a common point of entry for sexually transmitted diseases, including HIV. Removing it lessens the risk of transmission.

Uganda introduced the Safe Male Circumcision Policy in response to data showing that the procedure reduces the risk of HIV transmission by as much as 60 percent. The policy aimed to get 4.2 million men between the ages of 15 and 49 circumcised by 2016, but, more than two years later, Watya says that fewer than half of that number have been circumcised. He attributes the shortfall to myths and misconceptions about circumcision that abound in Uganda, where some men think the procedure is an attempt to change their religion. Some spouses fear that if a man is circumcised, he will become promiscuous.

Watya says that the policy, which has led to the circumcision of more than 2 million men, is still one of many strategies used to reduce the incidence of HIV.

As it became clear that the policy was falling far short of its target goal, the Ugandan government began in 2015 touting in advertisements on the radio, television and billboards the benefits of male circumcision.

Service providers say the policy was well-funded in the early days, but funding has waned since then, leaving the average procedure, which costs approximately 50,000 Ugandan shillings ($13.30), out of reach for the average Ugandan.

In the early days of the policy, circumcisions were provided free of charge, says Ivan Nume, a counselor at the AIDS Information Centre, a nongovernmental organization.

In 2010, clinics associated with the policy were circumcising 1,000 men per month. Today, that number has dropped to 10. Nume blames the decrease on inadequate funding, lack of awareness and cultural taboos.

Still, there is reason to be hopeful, says Dr. Moses Magezi, a urologist at St. Francis Hospital Nsambya in Kampala. He says the number of men walking in to ask for circumcisions has increased. There, the procedure costs 10,000 shillings ($2.66). Magezi says the hospital performs eight to 10 circumcisions per week.

“It was lower than that before the advent of the Safe Male Circumcision Policy,” he says.

One unexpected group of opponents to safe male circumcision is wives.

Sarah Nalweyiso, a mother of three and homemaker, says she would not be comfortable with her husband getting a circumcision to prevent HIV.

“My husband wanted to get circumcised, and I advised him not to,” she says. “He might end up becoming promiscuous, thinking that now that he is circumcised, he can sleep around and not get HIV.”