Skip to main content
The story you are reading was published on Wednesday June 29, 2016. To read more recent stories click here. 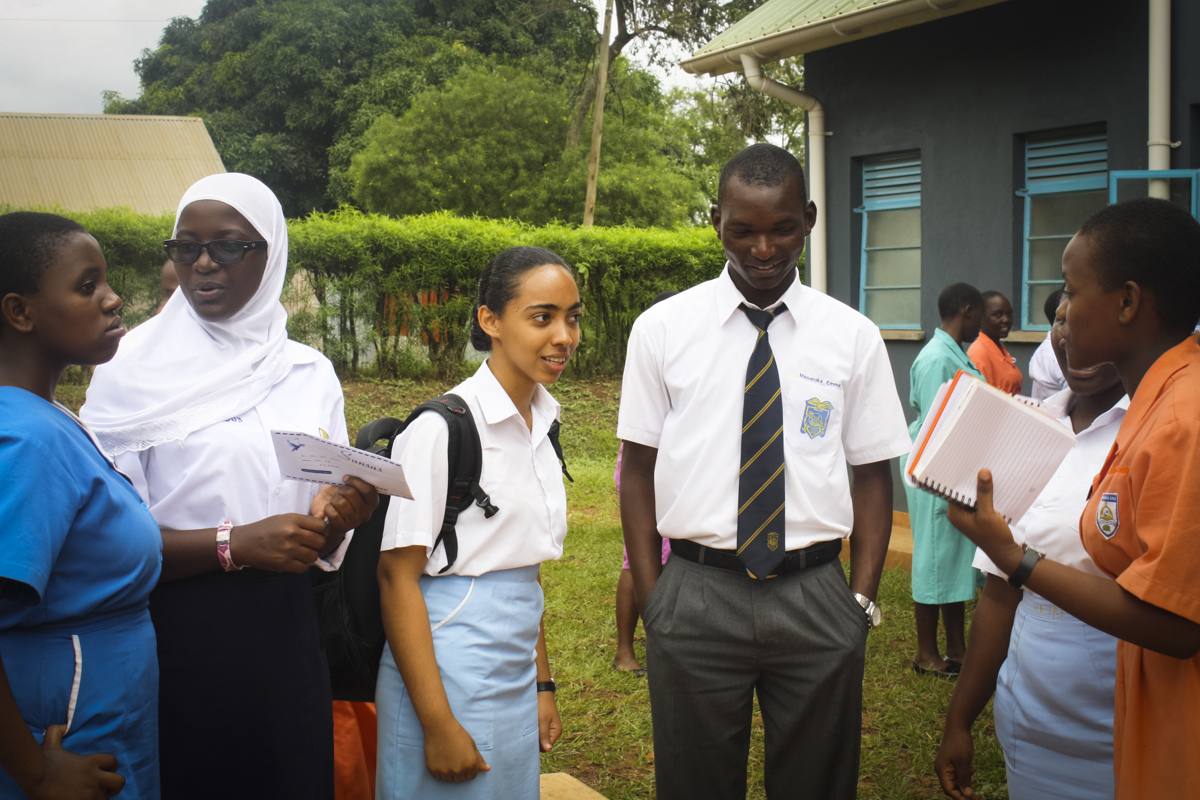 KAMPALA, UGANDA — Evelyn Nalugo, 18, completed her ordinary high school level in November. She was supposed to return to St. Peter Bukalango Secondary School in February to get a pass slip that would allow her to apply for an advanced level.

But she never went back. The only way she’d return there, she says, is if the school administrators allowed her to grow out her hair.

“No school that my parents can afford to send me to will allow me to study with my hair,” she says. “It’s grown some inches tall now and I am not willing to cut it off.”

Nalugo’s problem is a common one. Most schools in Kampala require black girls to cut their hair short. And in many cases, other female students, including those who are Asian or bi-racial, are allowed to grow their hair long.

INSIDE THE STORY: Having been forced to comply with a standard hair policy at a Ugandan school herself, a GPJ reporter is surprised to find that, at some schools, the policy doesn’t apply to girls who are not black. Read the blog.

The practice dates back to the early 1900s, when missionaries ran schools, says Mercy Mutungirehi, the director of studies at Amity Secondary School in Nansana in Wakiso District.

The missionaries trained students to be clerks, interpreters and office messengers, she says.

“They needed these people to be smart,” she says, referring to a neat, tidy appearance. “By encouraging these people to cut off their hair while in high school, the missionaries were encouraging uniformity and smartness, a thing that is unachievable with natural African hair because of its complexities.” 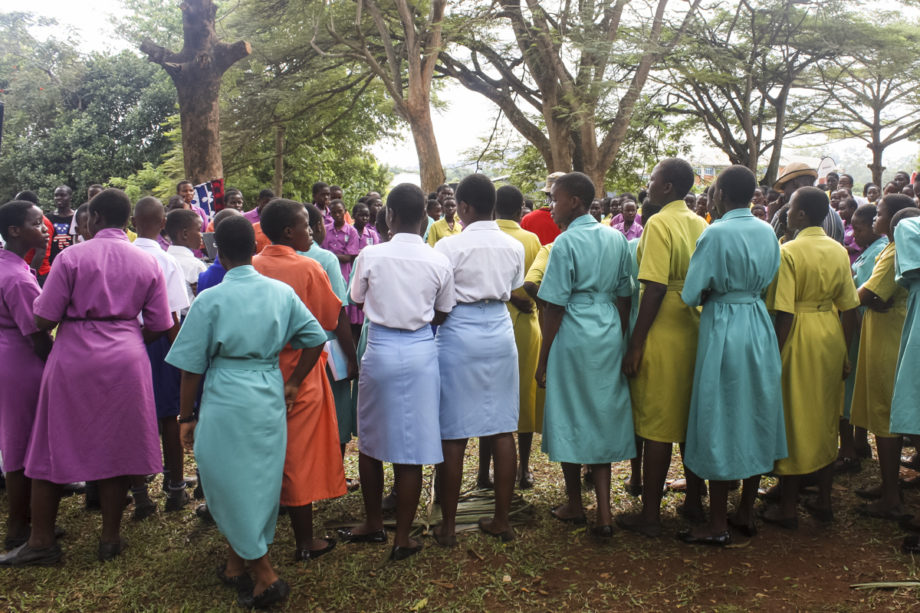 Students at Nabisunsa Girls School gather for a poetry festival in April.

Kyamulabe Margret Mugema, the middle school dean at Makerere College School, estimates that 90 percent of Kampala’s schools – she says there are 111 of them registered – have policies requiring black girls to cut their hair short. There’s no known official tally of the number of schools that have such policies.

It’s a bitter requirement for girls who believe it allows discrimination against a single racial group.

“The school administration is exercising discriminations against us native girls by not allowing us to grow hair,” says Cynthia Busaggwa, 15, who attends Makerere College School. “They’ve made many of the girls believe that it’s only girls of other races that should be allowed to grow their hair because their culture doesn’t allow them to cut their hair off.”

Busaggwa adds she must cut her hair short while her friend, who is of Indian descent, is allowed to wear her hair in a long ponytail.

Some students agree with the policy. Sofia Kirabo, 16, who also attends Makerere, says African hair can be difficult to maintain.

“When long, it can be very disorganized,” she says, adding that it can also be “thick and painful.”

“So when school administration says we should all keep it uniformly short, it’s right,” she says.

Mugema, the Makerere dean, acknowledges that the policy discriminates against some girls, but says it’s for a good reason.

“Yes, we apply discrimination but we only do this for the good sake of the girls,” she says.

Mugema says Makerere’s policy on hair has been in place since the early 1920s, but the issue is often raised. The board last discussed the policy about two years ago, she says.

Girls who have a good reason to grow their hair long, such as a cultural tradition, can write to school administrators and ask permission to do so, she says.

“We let other races grow their hair because it’s in their culture not to cut off their hair, and we respect that,” she says.

There are consequences – intended or otherwise – to school hair policies.

“I felt ugly after I had cut off my hair,” says Mercy Ashabahebwa, who says school administrators at Nabisunsa Girls School in Kampala forced her to cut her hair when she began attending two years ago. “I felt my self-esteem go down. Hair is supposed to enhance our beauty, but when we cut it off we look ugly.”

Nalugo, the teen who opted not to return to school because of a hair policy, says she feels beautiful with long hair.

“Even the Bible says a woman’s hair is her crown,” she says. “When they force us to cut off our hair it’s like they want us to look ugly.”

“When girls grow their hair, they fall prey to rapists because they look beautiful and grown up people mistake them for older women, so I agree with the school administration,” he says.

Girls who keep their hair short are seen as young, “therefore men shy away from them so cases like defilement are minimal,” she says.

But Nalugo says her own experience proves that theory wrong.

“I have grown this hair since late last year. I braid it all the time. How come I haven’t been defiled?” she says.

Hair length has nothing to do with whether girls are assaulted, says Hilary Kagabene, who attends Gayaza High School, which allows girls to grow their hair out.

“Every girl can fall prey to rapists and defilers with or without hair,” she says.

Kagabene’s hair is long and gathered into a bun sometimes known locally as a puff. 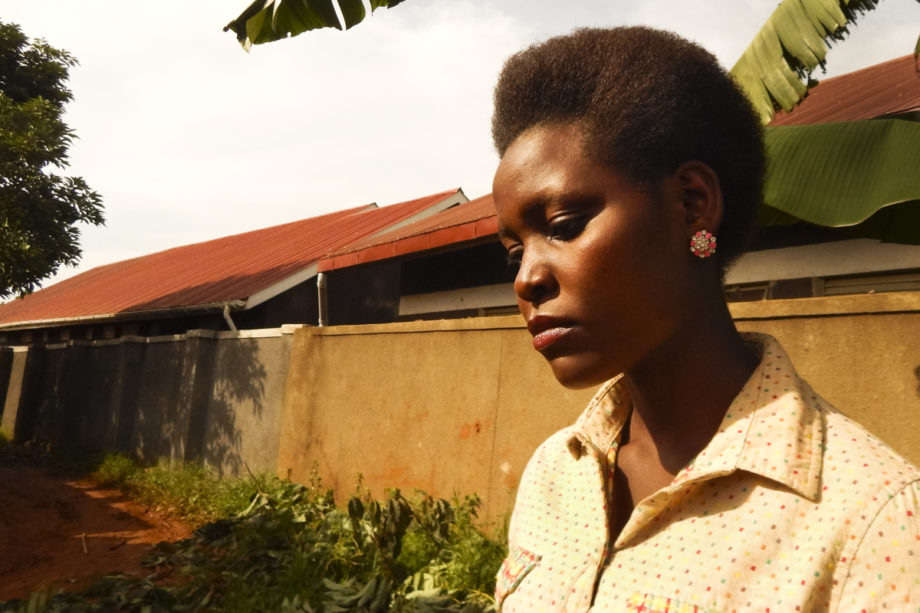 Evelyn Nalugo grew her hair out after she left St. Peter Bukalango Secondary School, and doesn’t plan to return there for advanced courses because she would be required to cut her hair short again.

Parents and school administrators say there are other reasons to keep girls’ hair short.

Allen Kamusiime, whose daughter is at Makerere College School, notes that long hair can be expensive.

“Generally, African natural hair isn’t easy to maintain,” Kamusiime says. “It’s kinky, hard and expensive, unlike the Asians and other races which is silky and easier to comb. Allowing native girls to grow hair would be incurring the costs to us parents which many of us aren’t ready for.”

“When you allow them to grow long hair, they will spend a lot of time on it and this might affect their performances in class,” she says.

“Allowing Nalugo to grow her hair would become a distraction. She wouldn’t concentrate well to her studies as she would be with short hair,” Nanyonga says.

Then there’s the issue of hygiene.

“Hygiene is very important in this school,” Mugema says,of Makerere College School. “We don’t allow native girls to grow their hair because some will grow lice, and they will spread it to the other students. So to avoid such, we encourage a uniform look by not allowing them to grow hair.”

Hanan Muhammad, who was born in Uganda but is of Yemeni descent, attends Nabisunsa Girls School. She says African girls struggle to keep their hair neat.

“Some of them let it grow lice because it’s hard to comb,” she says.

Muhammad is allowed to grow her hair long.

“I have never seen a girl with lice in this school,” says Kisarale.

Students there learn to multitask, she says.

Gayaza High School is widely considered to be one of the top-performing schools in Uganda.

Girls at other schools should have a chance to prove that they can handle long natural hair and still excel at school, Nalugo says.

“If we fail the school administration in any way, then they can have us to cut it off,” she says.