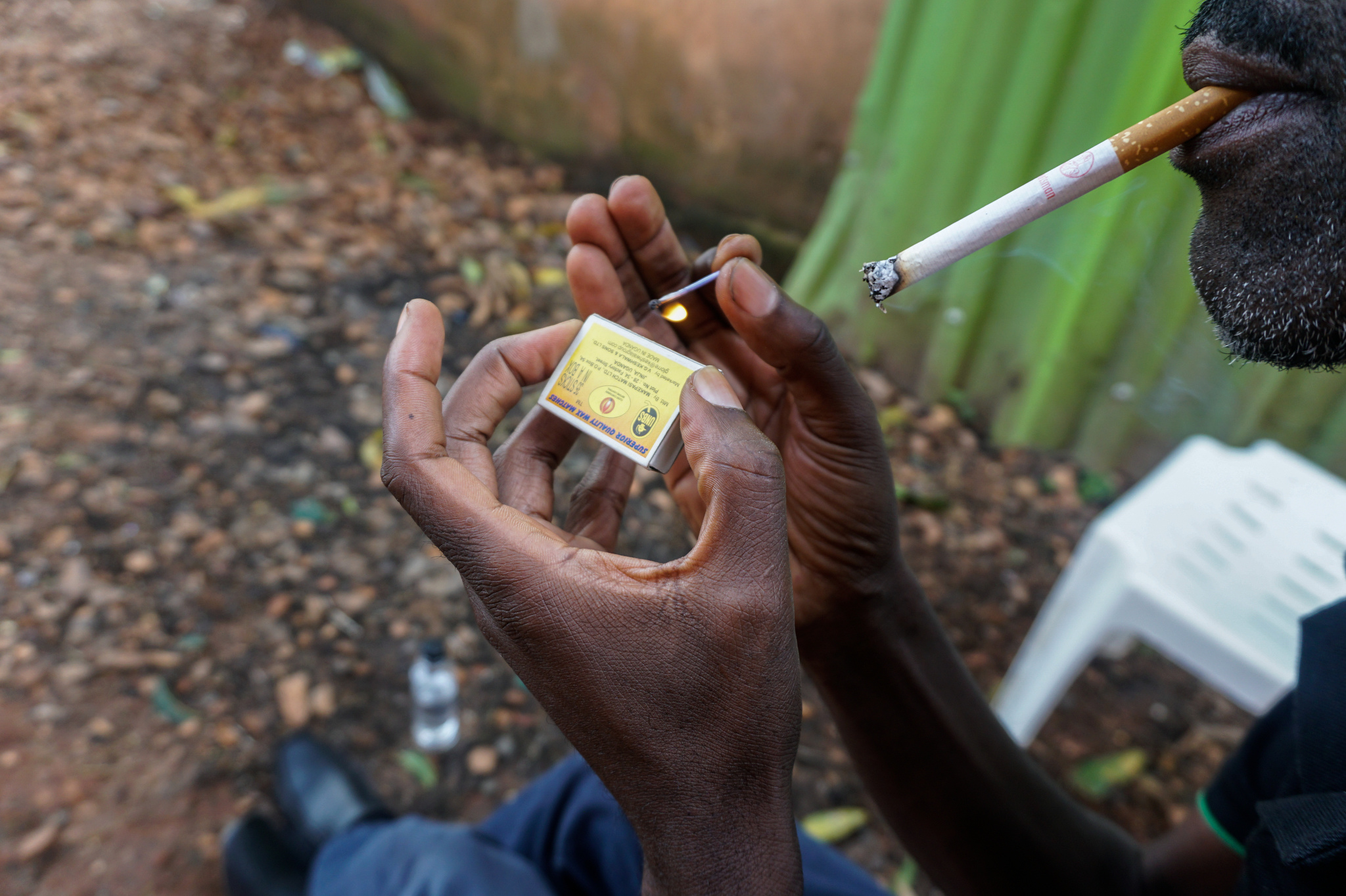 KAMPALA, UGANDA — Moses Mbane enjoys the sweet taste of tobacco in his mouth, the smooth rush of smoke in his throat when he inhales a cigarette. Smoking relaxes the 52-year-old businessman when he’s stressed, and warms him on chilly mornings and evenings.

And he knows it’s killing him.

Mbane, who lives in Wakiso district just outside Kampala, the capital, has smoked since he was 9. After doctors diagnosed him with stage 3 lung cancer in 2019, he tried to stop. He lasted two days.

“Then I started looking for alternatives when I realized I couldn’t stop smoking,” he says, sitting in a chair outside his spacious home. “A friend of mine told me about e-cigarettes and how they have helped some people stop smoking and that they are safer than actual cigarettes. But they are not here in Uganda. I wish the government lifts the ban so I can access them.”

He and some health activists say officials could save lives by lifting a ban on electronic cigarettes, oral tobacco and nicotine products. Opponents argue such options to traditional cigarettes are just as deadly.

The debate has bubbled up recently as British American Tobacco Uganda, the country’s largest seller of tobacco products, has pushed the government to reverse the 2015 Tobacco Control Act, which, among other things, prohibited smoking in public and outlawed a variety of alternatives to tobacco.

Dr. Hafsa Lukwata, who oversees the Ministry of Health’s tobacco control efforts, says the government has done no recent research on tobacco consumption. The latest ministry study, in 2013, showed that nearly 8% of Ugandans age 15 and older, or 1.3 million people, used tobacco products.

“A friend of mine told me about e-cigarettes and how they have helped some people stop smoking and that they are safer than actual cigarettes. But they are not here in Uganda."Moses Mbane

But Dr. Noleb Mugisha, head of the Comprehensive Community Cancer Program at the Uganda Cancer Institute, a public research and treatment facility, says 72% of patients there with oral and respiratory diseases have a history of smoking.

And the World Health Organization last year reported that cancer killed 21,829 Ugandans in 2018. By comparison, HIV/AIDS killed 23,000 Ugandans that year.

Ogwaro Denis, 46, a carpenter, confesses to flouting the Tobacco Control Act by smoking in public spaces. He smokes everywhere — in bars, when he walks on the roadside and when he is at work at the markets. In 2015, he tried to quit smoking using nicotine gum, but that lasted only a month.

He wants to try other alternatives to tobacco. 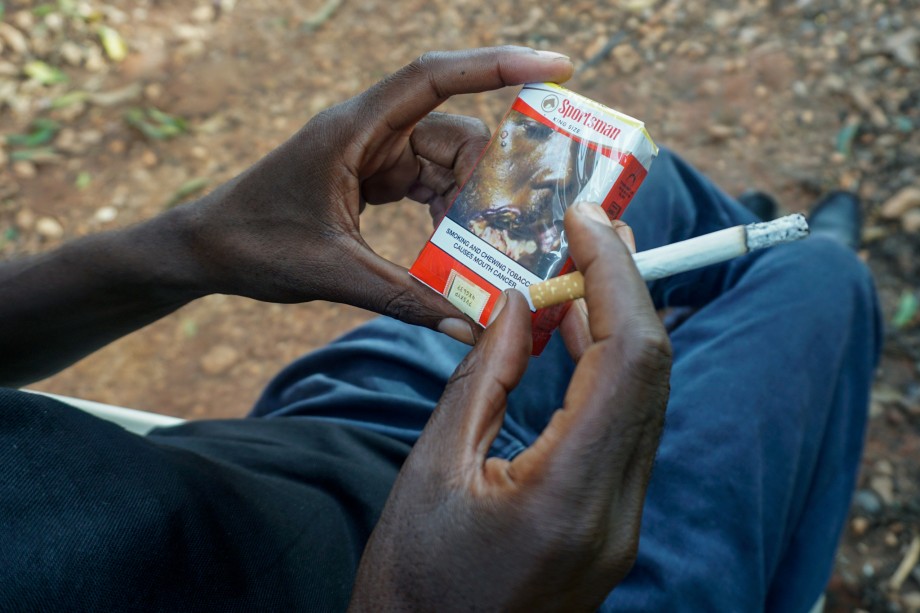 Ogwaro Denis exhales smoke as he looks at a packet with a photo of a mouth with cigarette-related wounds.

“I had to use like five” types of nicotine gum, he says. “They were expensive, too, compared to the cigarettes.”

Separate from the Tobacco Control Act, the government also laid heavy taxes on cigarettes, a cost passed on to smokers. A single cigarette used to cost 100 Ugandan shillings (3 cents); now it sells for 300 shillings (8 cents).

But the heavy taxes may not be working: Lukwata says she sees more tobacco-related cases of oral and esophageal cancer now than she did before the law went into place. Alternatives to tobacco are as potentially addictive as regular cigarettes, Lukwata says, and they can do long-term harm to a user’s health.

“We don’t need safer products,” Lukwata says. “We need safe products that will not continue to harm Ugandans.”

Kirunda Magoola, managing director of British American Tobacco Uganda, says products such as e-cigarettes and tobacco-free oral nicotine pouches work for people who want to quit smoking. BATU did not sell such products before the 2015 law and now wants to expand its share of the overall market, he says. 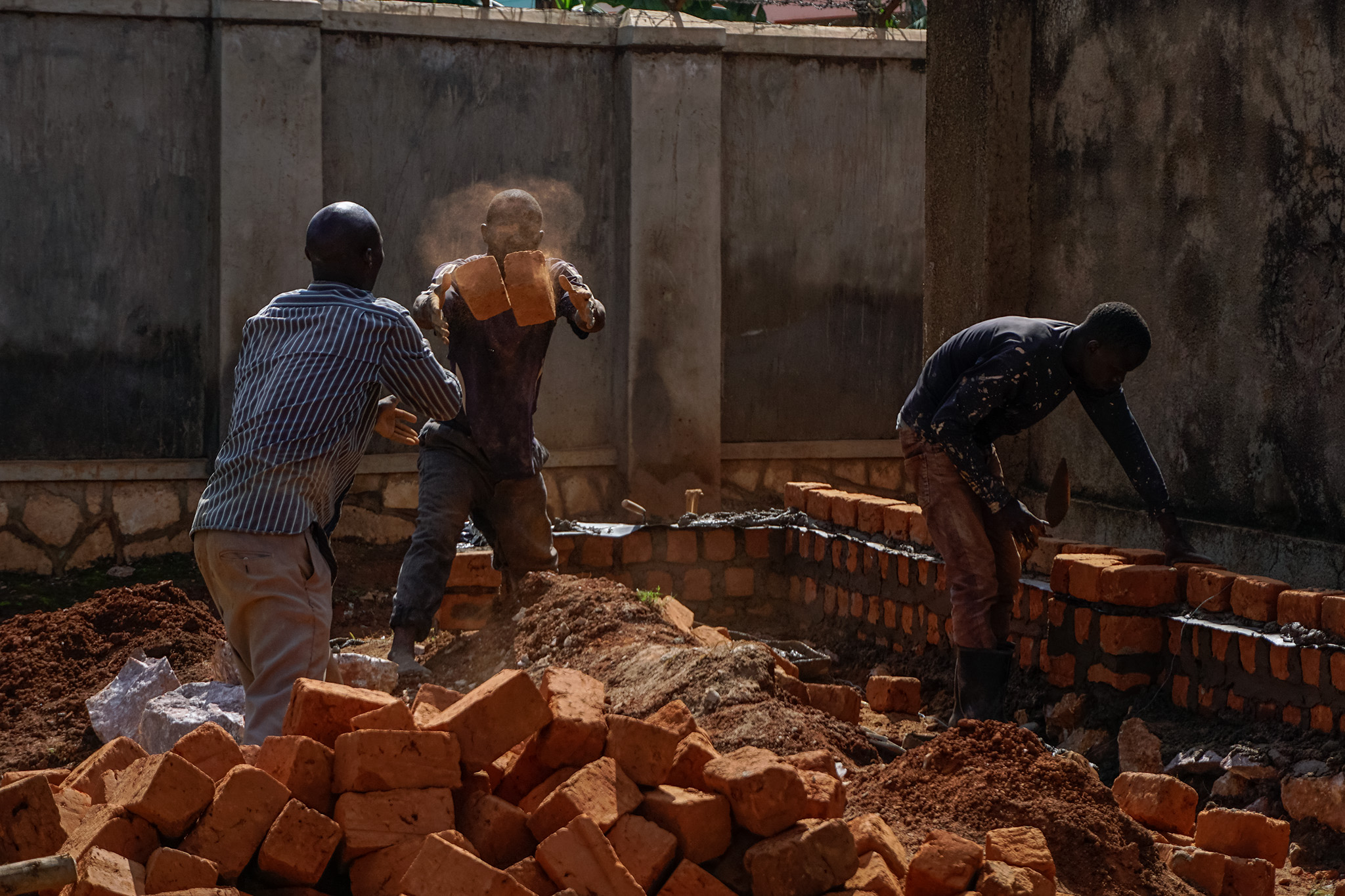 As of December 2019, BATU held 60% of Uganda’s cigarette market. BATU also dominates the market in neighboring Kenya, where, along with several companies, it already sells e-cigarettes and nicotine pouches.

Magoola notes that the current ban in Uganda has allowed for a thriving black market. His company commissioned third-party research in 2020, which found that about 17% of cigarettes sold in Uganda — including e-cigarettes and untaxed cigarettes — were illicit.

Mbane says his 98-year-old grandmother, who is still alive, introduced him to dry tobacco. He moved to conventional cigarettes when he was 21.

A man of wrinkled brow and nicotine-stained lips, Mbane sits in his compound surrounded by trees, maize plants and plantain trees. As he exhales smoke from a cigarette, he points to a photo on the packet that depicts a mouth with grotesque wounds.

“Perhaps that image would have scared me before I started smoking, before I got lung cancer,” he says.

He takes medication and does radiation therapy three times a week, and it leaves him weak with no appetite. Still, sometimes by midafternoon, he has churned through a pack of cigarettes.

“Cigarettes give me the unusual warmth I can’t get from the sun or anywhere,” he says. “Perhaps alternatives will give me that when they are availed on the market.”