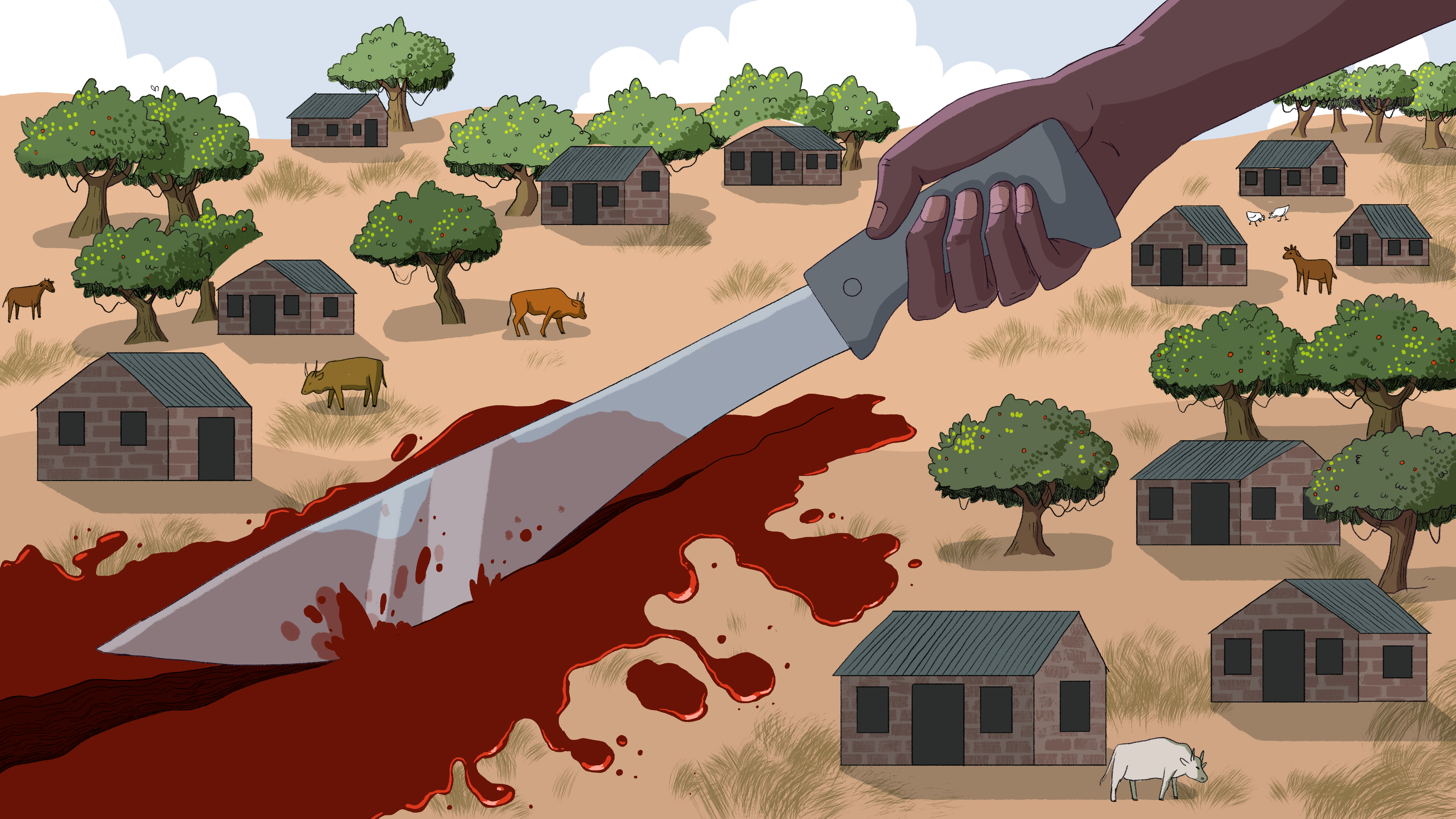 He wanted police to know about a letter he had written to the 500 tenants living on 2 square miles of land he owned in the Mityana District in central Uganda. Most of those tenants were squatters, which means they had settled on Mulinde’s land illegally.

Mulinde’s letter requested the tenants’ presence at a meeting scheduled for August 13, 2019, with State Minister for Lands Persis Namuganza. He was willing to negotiate with the squatters who were occupying 5-acre parcels on his land. And his terms were simple: settle for 3 acres and give the other 2 back to him.

Many of the squatters agreed with the proposal, but others weren’t happy.

Less than two hours after Mulinde visited police headquarters, the August meeting was no longer necessary. He was dead, hacked to death by unknown assailants.

“Mulinde’s tenants were many, and most of them saw him as an enemy,” says Isha Ntumwa, the Mityana resident district commissioner.

The murder followed a 2017 machete assault on Mulinde, says Norbert Ochom, public relations officer for the Wamala Regional Police. A suspect was charged with attempted murder in that assault but later released.

Mulinde’s gruesome death sheds light on a growing trend of violence toward landowners who attempt to clarify or assert their rights. Some say the rise in these crimes is related to laws passed by Parliament in recent years, including the Land Amendment Act of 2010 and the Landlord and Tenant Bill of 2018, which were not adequately explained to the public.

Murders of landlords and destruction of their property occur when tenants suspect that they will be evicted, or after massive and violent evictions when the land has been sold to a new owner.

“This is often reported from the countryside, especially in Buganda, west and southwestern part of the country, where there is land pressure,” says Fred Enanga, public relations officer for the Uganda Police Force. “Landlord-tenant conflicts are registered in cases where there is resistance on the side of tenants who are many in numbers.” 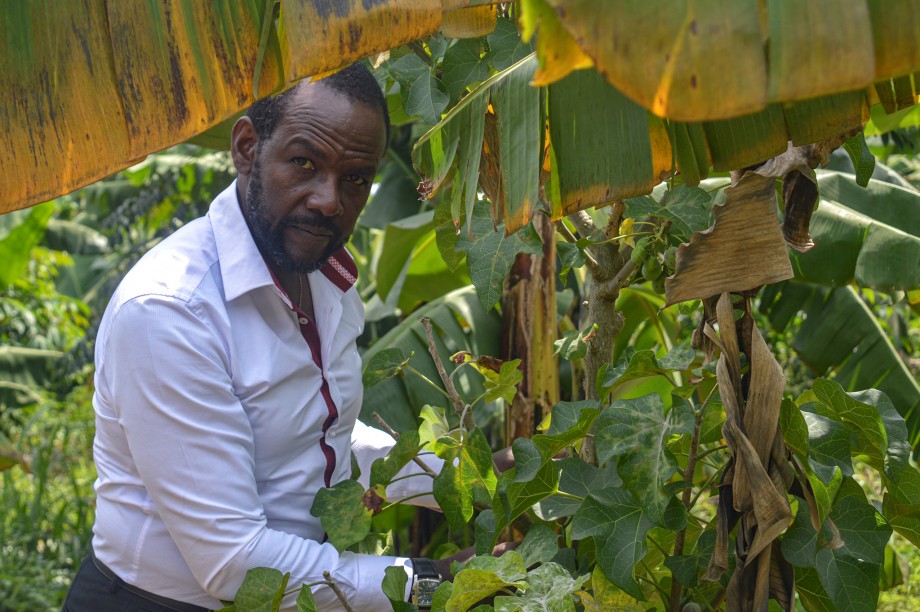 Landlord Samuel Zinunula Iga visits one of his rural properties in Uganda. He says mob violence between landlords and tenants is a struggle between old and new legal systems. He’s experienced some tense incidents at his properties.

The conflict between tenants and landlords is rooted in Uganda’s complicated land-ownership system.

In the Buganda region and in some parts of Mbale, Bunyoro and Toro, land is owned under the Mailo system, which was established after the Buganda Kingdom signed a 1900 agreement with the British, dividing the land into two categories. Official Mailo refers to land owned by traditional leaders: the Kabaka (king), Katikiro (prime minister), Omulamuzi (chief judge) and Saza (chiefs). Under the private Mailo system, land is owned by private individuals.

Dennis Obbo, principal information scientist and spokesperson for the Ministry of Lands Housing and Urban Development, says that under Mailo tenure, a landowner owns the land forever. They may sublet, mortgage, pledge or sell the land with or without giving the first option of purchase to the tenants. However, those who buy the land must be introduced to the lawful occupants, and if the new landowner wants to sell the land, then he or she must give the lawful or bona fide occupants the first option to buy out the holdings.

But even though tenancy arrangements seem straightforward, disputes continue to occur, Obbo says.

In an essay in Kampala’s New Vision newspaper, Obbo writes, “Incidences of occupants (tenants) disregarding the law and basically ‘evicting’ landowners are rife. Yet the two categories need to work together to sort out or resolve the challenge of multiple rights on the same piece of land through Okwegula (the lawful or the bona fide occupant buying out holdings from the registered landowner) or Okutegeragana (coming to an understanding whereby the land is shared between the lawful, or bona fide, tenant and registered landowner in a mutually agreed land sharing arrangement).”

This arrangement allows the tenant to receive a land title, giving him or her primary rights to the land.

“In such situation, the tenant receives a land title and the land ceases to have multiple rights. This would maintain harmony amongst the landlords and tenants,” Obbo says. “The ways of going about the two methods is provided for in the 2013 National Land Policy and other available guidelines on administration and management of land.”

Officials with the Uganda Police Force condemn mob justice but have not been able to stop it.

“There is a circle of anger within the public, which forces them to murder, and the circle doesn’t end,” says Officer Ochom of Wamala Regional Police.

“Some people feel that the law has failed them, when they see that someone they allege has committed a crime is released on bail, but they don’t know that bail is also a right. They think that the law will not help them, so they take the law in their own hands,” Ochom says.

Other observers believe that increased migration has contributed to the rise in landlord-tenant violence.

“Capitalism is gaining ground, and land is seen as life or death by both the rich and the poor – it’s either you or the land,” says Fabian Niwagaba, district security officer for Mityana. He attributes land conflicts to “migration of over 1 million people from different areas to Mityana District, and that means unnatural population growth in the district that needs more land.”

“There is a struggle between old and new systems: land governance, identity, tenure systems and legislature, and this results into chaos,” says Samuel Zinunula Iga, an entrepreneur. “And I am afraid this will not be solved in the next foreseeable future.”

Police officials are trying to educate the public about land issues in various ways – on radio programs and at public gatherings, for example. But most importantly, they believe landlords must do their best to keep track of and communicate with their tenants, both legal and squatters.

“Landlords would be expected to know the occupants on their land and where possible keep a register of the occupants and their successors,” Obbo says.