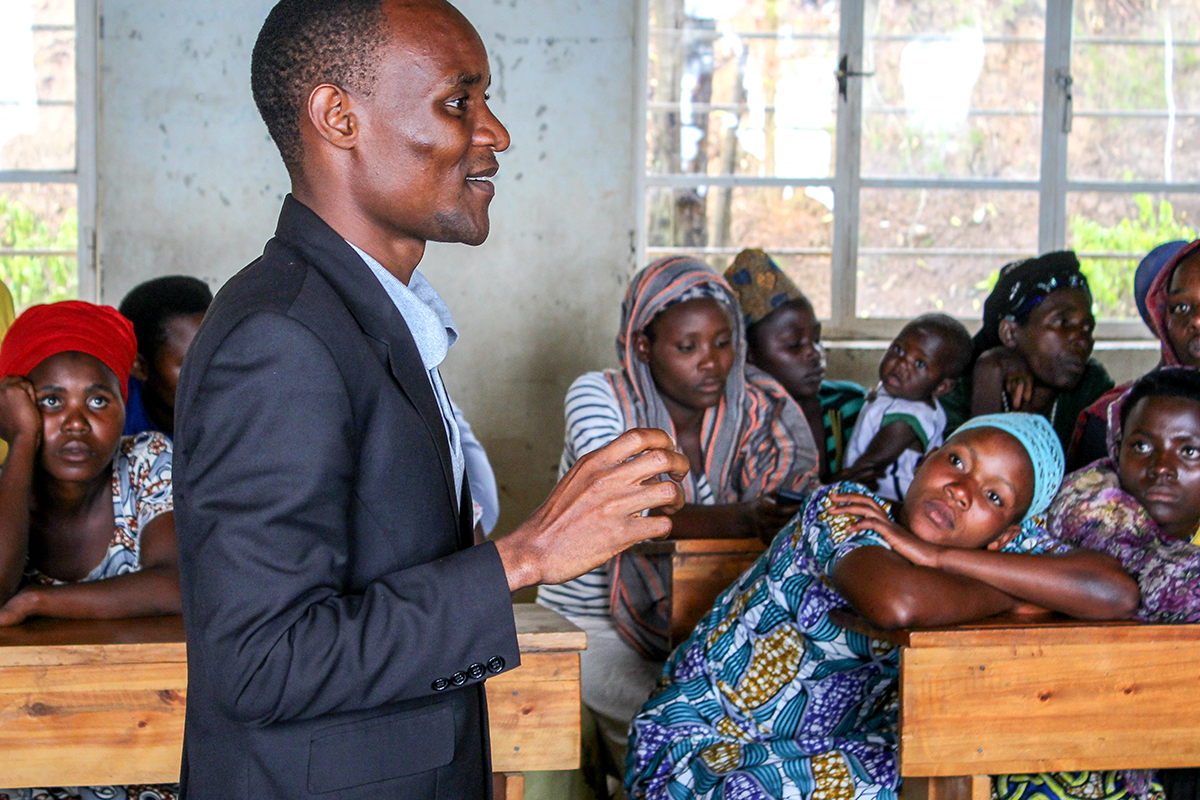 She has nine children and sustains her family by selling vegetables. Her income is small and inconsistent, she says. Her husband, a store security guard, earns 15,000 Rwandan francs ($18) each month. Living hand to mouth is all they have ever known.

Food is the family’s first priority, she says. Healthcare is second.

“I struggle to make ends meet, but I have to make every effort to ensure that my kids have access to healthcare services in the event of illness,” she says.

Rwanda’s community-based health insurance program, known as Mutuelle de Santé, aims to ensure that rural Rwandans have access to healthcare by offering coverage to anyone who pays the set annual premium. But Mukarubabaza says a little-discussed loophole in the program makes benefitting from the insurance program extremely difficult for some of the country’s poorest residents.

When registering for Mutuelle de Santé, families must pay 3,000 francs ($3.50) per family member. And if a family cannot pay for every member of their family at once, the whole family is denied coverage.

For Mukarubabaza’s family of 11, paying all of the coverage premiums at once is a heavy lift.

But being able to care for her children when they are sick is important, she says. So she and her husband sought the assistance of Agaciro K’iwacu, known in English as Dignity of Our Home (DOH), a new local organization working to teach people how to save a portion of their daily income in order to afford the country’s health insurance plans.

Together, they devised a savings plan that allowed them to afford this year’s premiums for all 11 family members – they put 220 francs (26 cents) into savings every day. And when premiums were due at the end of July, the family was able to pay for all 11 people to enroll.

“This year luck was with me in that I afforded the insurance costs for myself and for my family,” Mukarubabaza says. 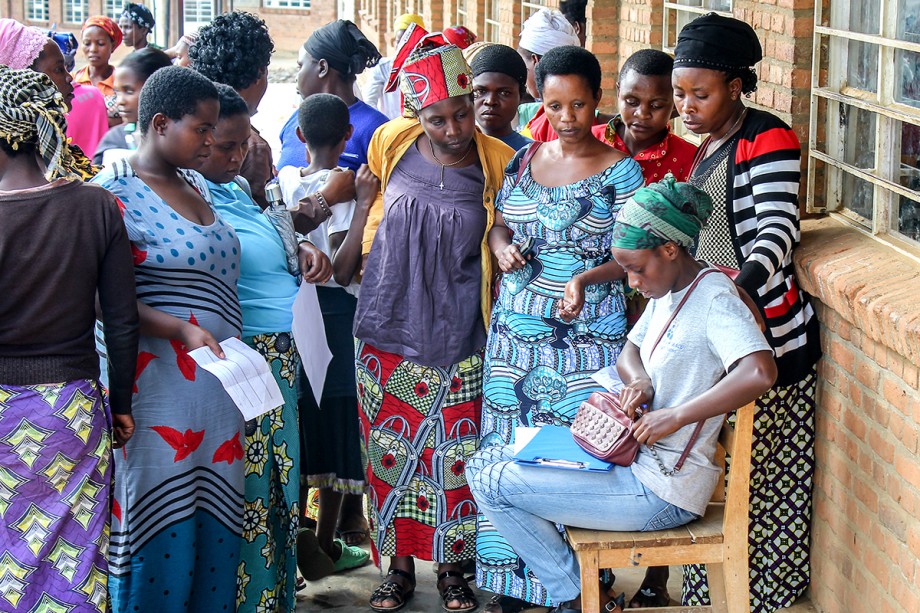 A Dignity of our Home (DOH) volunteer collects and records the money that the women have saved from their daily income to help pay for their family’s health insurance plans.

For Titus Théophile Turatsinze, 28, founder of DOH, teaching people to save money is the best way to convince them that they can escape poverty.

More than 60 percent of Rwandans live in extreme poverty, living on less than 1,050 francs ($1.25) a day, he says. This forces people to focus their resources on food and shelter, with no time or money left for healthcare or future planning. So far, he says DOH has helped 2,500 families to enroll in Mutuelle de Sante in several parts of the country’s Rubavu district, and has plans to grow.

Mutuelle de Santé launched in December 2004 as the country’s primary strategy for helping Rwandans access affordable healthcare. The plan categorizes Rwandans into four social classes, and the government subsidizes the 2,000-franc ($2) premium for the poorest of the poor. Owning a small home and having a job, as Mukarubabaza and her husband do, makes citizens responsible for paying their own premiums. As of 2016, an estimated 79 percent of Rwandans are signed up for the insurance program, according to the Rwanda Social Security Board, RSSB.

A staff member at the RSSB, who spoke on the condition of anonymity for fear of being fired, says requiring people to pay for their whole families at once is a way to keep costs low. As it is, the source says, the 3,000 francs people pay per year does not cover all of the services they are likely to use.

In 2017, enrollees paid 3,000 francs per person to join Mutuelle de Sante, which they can take advantage of after a 30-day waiting period. Services include consultations and laboratory services, family planning, maternity care, minor surgery, and imaging and dialysis. Pharmacy services are excluded when drugs are not available in government health centers.

Turatsinze says he founded DOH in April to help citizens save for Mutuelle de Santé and other goals, like education. Startup capital for the organization was provided by five friends who contributed 350,000 francs ($415) to open a bank account and invest in training materials. He says their savings has grown to 4,200,000 francs ($5,000) over the last several months, which will allow them to invest in animals for a breeding program and a plot of land for a school where they can grow their training and savings programs. The school will be similar to a popular one that teaches women to make liquid soaps.

DOH has fourteen volunteers, who work with local communities to create savings plans in different sectors of the Rubavu district. Each of the volunteers receives a monthly allowance of $35 to cover the travel and communication costs of coordinating with community members.

After meeting with a DOH volunteer, Blaise Habarugira, 25, started setting aside some money with a view of affording the Mutuelle de Santé premium costs. As a single man, he only has to buy the plan for himself, but he still finds the amount burdensome. He has a serious eye condition and needs consistent medical care.

“My eyes itched and hurt, and it even happened at times that I tried to open my eyes but I couldn’t, thus I was obliged to stay in bed. Treatment costs a fortune,” he says, adding that before enrolling in Mutuelle de Santé, the medicines he needed were expensive and hard to find.

“Because of lack of money, I was obliged to settle for painkillers and nothing else. But with the help of the savings scheme, I can afford to procure medicines from drugstores,” Habarugira says.

He worked with DOH volunteers to save 20 francs per day for several months to afford his enrollment. 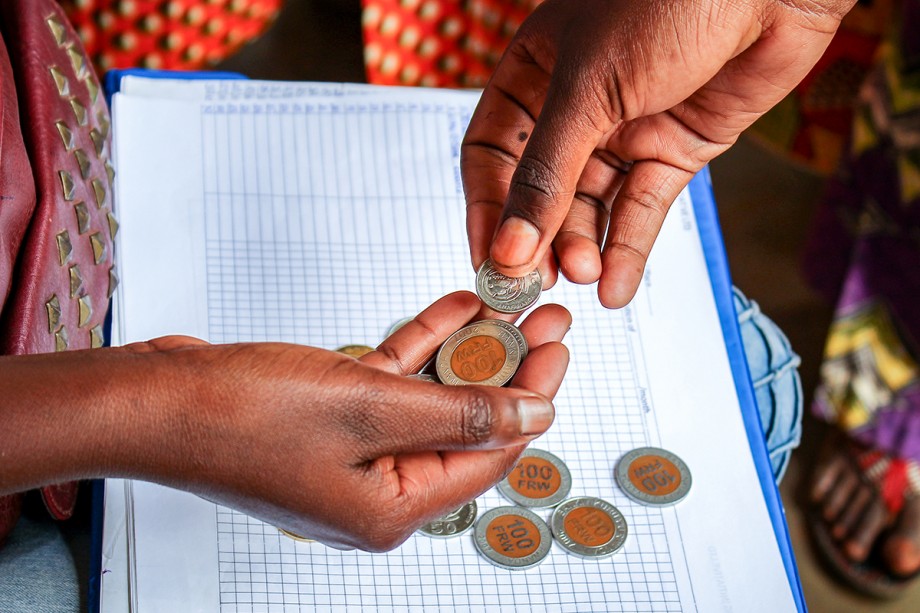 Money saved by families participating in the Dignity of our Home savings plan is exchanged and recorded to help pay for the family’s health insurance.

Monique Mukamuramutsa, 33, a DOH volunteer, says she is passionate about helping Rwandans save money to invest in their health.

“Many people ­– myself included – had initially fallen into the habit of thinking that it was impossible to save given their low income,” she says. “Today, however, women come to my house and say they’re interested in being registered, as they can’t fail to get impressed by the changes in the lives of those who have chosen to set aside some of their money to save.”

Grita Nyiraneza, 36, the executive secretary of the Rwaza village in the Rubavu district, says the number of Mutuelle de Santé enrollees has increased in this community as a result of the DOH savings education and awareness.

For the 2017-18 enrollment period, Nyiraneza says, of the village population of 900 people, 700 were enrolled in Mutuelle de Santé as of July, when premiums were paid.

“And, most interestingly, of the 700 members, 431 had never joined the insurance prior to the sensitization campaign on the value of saving,” Nyiraneza says.

Turatsinze, of DOH, says he expects an increase in the number of people interested in saving for their own good and for that of their families in the coming year.

“The savings culture is a vital prerequisite for making sustained progress, and I will never tire of raising awareness until all my fellow community members get rid of the belief that they’re doomed forever to remain in the grip of poverty,” he says.