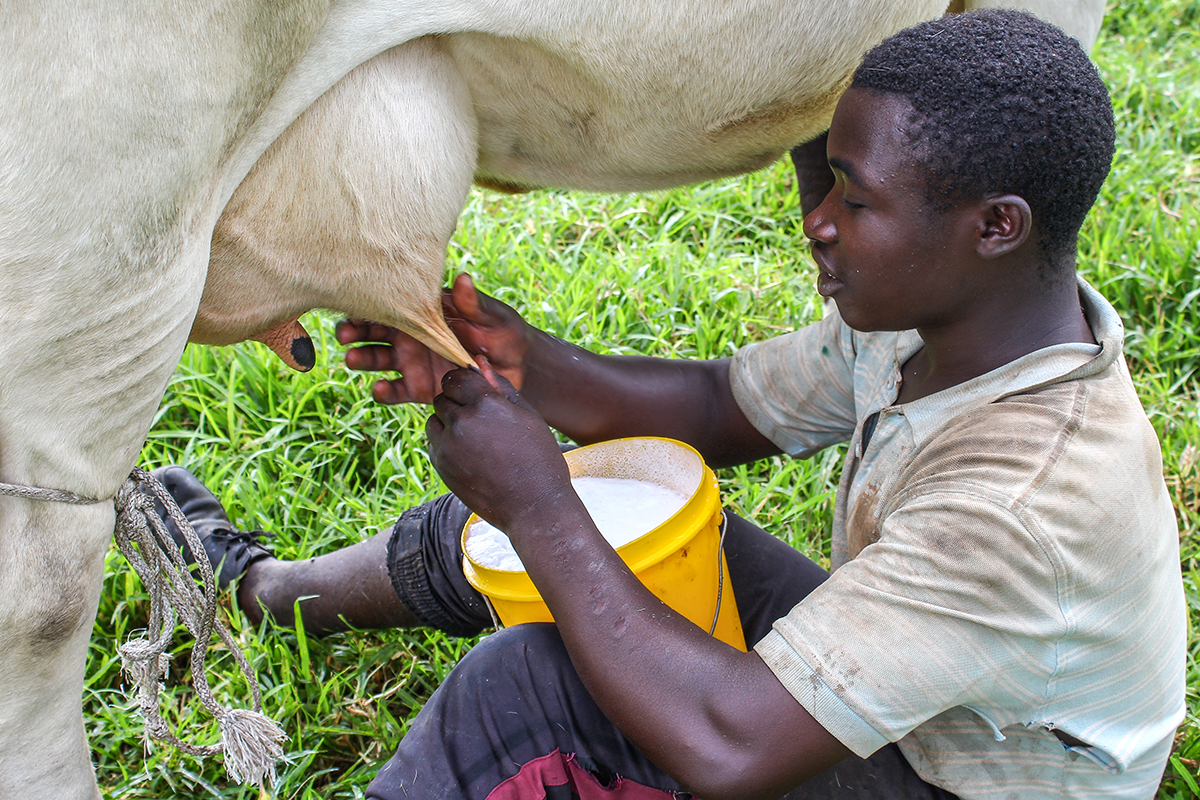 RUBAVU DISTRICT, RWANDA — The shelves of Stéphanie Dusabemariya’s kitchen used to be lined with pots, full of cooling milk. Each evening she would turn the raw milk into yogurt, to sell across the border the following day.

But tonight, her pots are empty.

Dusabemariya, 51, has been selling her milk products across the border in Goma, the capital of Democratic Republic of Congo’s North Kivu province, for 18 years. In DRC, she can sell the milk for a higher price.

But an October decision by the government of Rwanda to ban the export of raw milk products is creating hardship for farmers, traders and consumers alike.

“I’m the sole breadwinner for my family, and I rely only on selling milk to afford to pay for school for my kids,” Dusabemariya says, adding that the ban will likely mean she has to pull her daughters out of school. She has six school-age children.

According to the Ministry of Agriculture and Animal Resources, known as MINAGRI, milk products can only be exported after being processed by accredited processing centers. 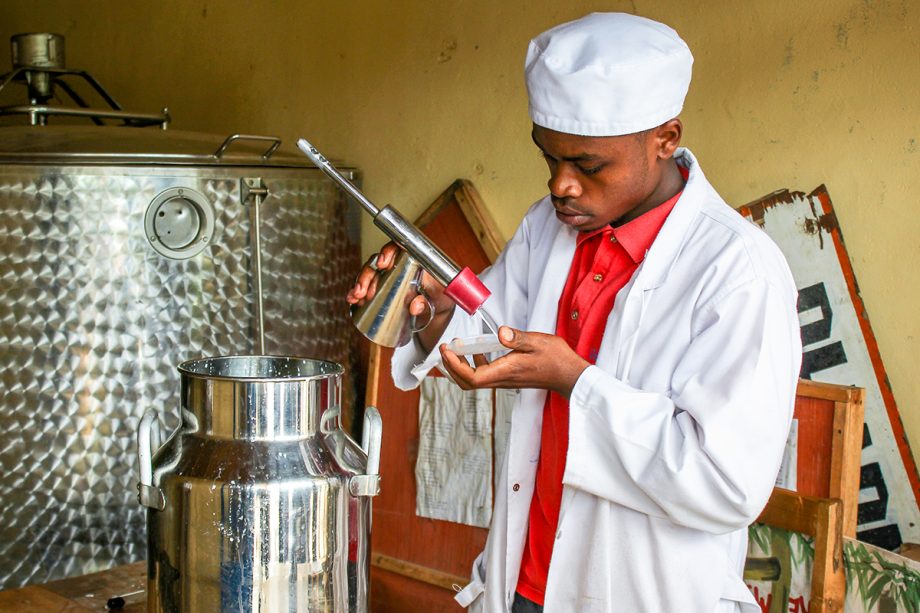 Veterinarian Theophile Kamanzi tests milk at the Kanama Milk Collection Center, in the Kanama sector of Rwanda’s Rubavu district. The farmers get paid if the milk passes the test. If it fails, the milk is seized and dumped.

Farmers must now sell their raw milk to Rwandan collection centers, located far from their usual selling points. The milk is then taken to dairy plants for processing.

The collection center pays farmers 160 Rwandan francs (19 cents) a liter, while farmers used to sell it for 200 francs (24 cents) to milk dealers.

“Our business is taking a huge hit for reasons completely unknown to us,” Dusabemariya says. “For generations, we’ve been drinking raw milk without any reported harmful effect…. I’ve never heard of anyone getting sick as a result of milk. Yet those who fail to include milk in their diet are those who fall prey to sickness.”

Throughout the region, Rwandans are known for high-quality meat and dairy products, like butter, yogurt and kivuguto, a fermented milk. The dairy industry is the largest segment of Rwanda’s livestock sector, which accounts for 10.5 percent of the country’s agricultural GDP, according to 2015 data from MINAGRI.

The new rules state that all raw milk must be taken to collection centers, where it is subject to quality control. Officials at the centers test the milk and measure its temperature. Any milk which fails the test is seized and spilled.

Théophile Habanabakize, 37, a cattle farmer, says that, in the first month of the ban, his business has been losing money because collection centers offer lower prices. He says he used to sell a 20-liter jerry can of milk for 4,000 francs ($4.77), but today he can sell the same amount for just 2,500 francs ($3).

He has even tried to sell his milk to traders, despite the ban.

“But traders are very reluctant to buy my milk, out of fear of police that seize any kind of banned milk they lay their hands on,” Habanabakize says. 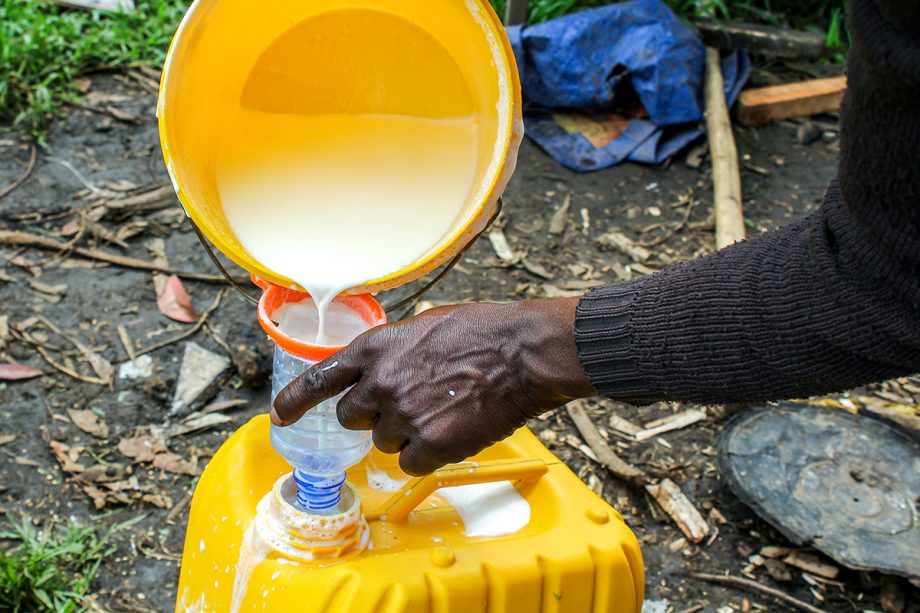 Vedaste Muhire, a manager at Theophile Kamanzi’s farm, pours recently extracted milk into a can to cover and protect it from becoming contaminated.

Bosco Mpenzi, 24, a dairy farmer in the ​​Rubavu district, says it’s impossible to get his milk to the collection centers at the required temperature. As a result, police have seized and dumped his milk several times this month.

“From the farm gate to the collection center is a four-hour journey under the scorching sun,” he says, adding that his milk never stayed in the sun that long when he used to sell it to local sellers.

Trésor Kambale, 25, who used to sell Rwandan milk in his street-side cafe in Goma, says the Congolese have a strong appetite for milk from Rwanda. In the absence of milk, he says, his business is hurting too.

“Customers are no longer willing to buy my donuts and bread in the absence of a cup of milk,” he says. “Rwanda’s ban will affect us as well. I used to have 20 clients per day who were asking for milk from Rwanda, but today none of them are coming.”

Germaine Furaha, 34, who lives in Goma, says the ban will have an impact on her children’s health.

“If Rwanda maintains the ban on exporting milk to Congo, my ten-month-old will fall easy prey to kwashiorkor,” Furaha says, referring to the disease of malnutrition known to give children swollen bellies.