Skip to main content
The story you are reading was published on Tuesday July 21, 2015. To read more recent stories click here. 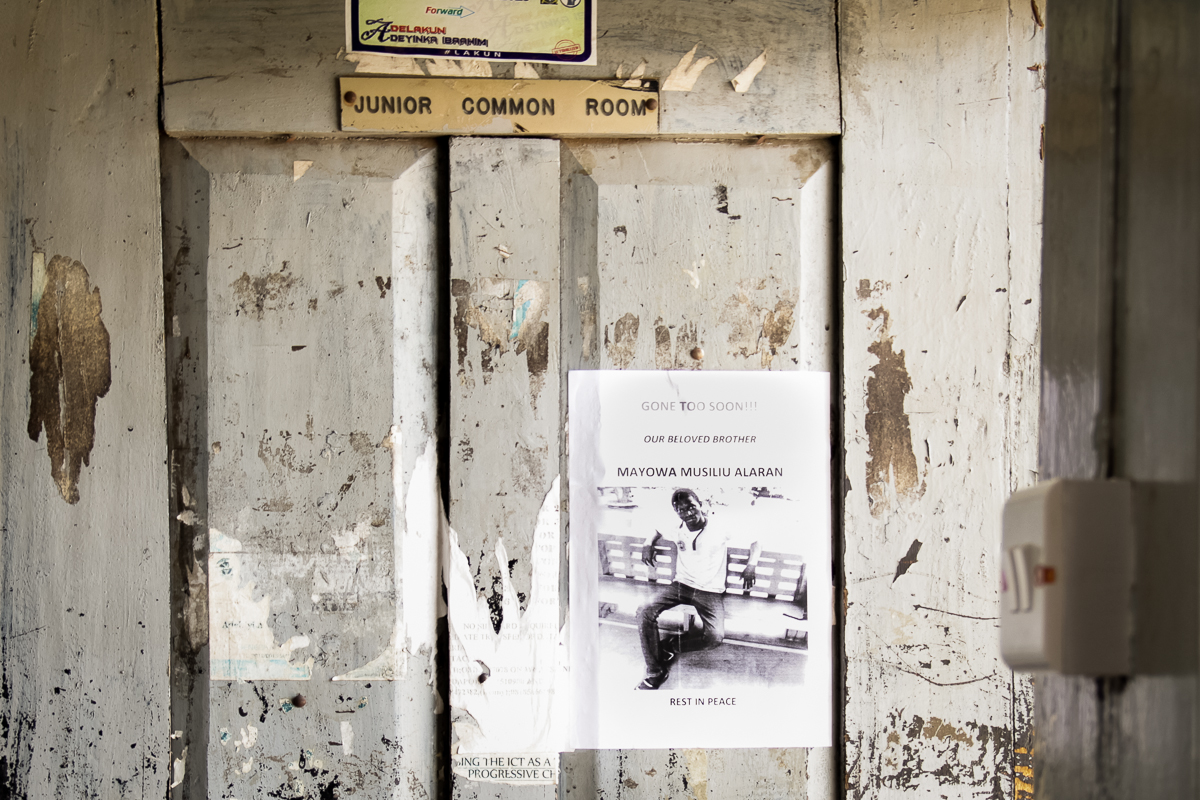 IBADAN, NIGERIA — The night he died, University of Ibadan student Mayowa Alaran was watching the Barcelona football team take on Bayern Munich in an overcrowded common room at Independence Hall.

The room seats about 40, but more than 100 students packed into the room that Wednesday, sitting on the floor and on laps. Some students stood at the window, blocking ventilation. Just one fan was running.

Electricity had been erratic for more than a week, students say. There was no light that night; a generator about 50 meters (164 feet) away powered the television.

“Everywhere was full,” says Emmanuel Egbe, an information studies student who was in the room that night.

Excitement and heat filled the room.

In the 32nd minute of the game, students raised an alarm. From a perch on the window’s security bars, Egbe spotted someone sprawled on the floor. It was Alaran.

The circumstances leading to Alaran’s death highlight the poor medical care provided by Nigeria’s oldest and highest-ranked university, students say. Ambulances aren’t reliable. Getting even basic medical care takes too long. A health post established to care for students at Independence Hall and three other halls has been shuttered – to the surprise of the university vice chancellor. Calls to emergency lines don’t always go through, and the university’s health system is burdened by providing more health care than it can afford.

University officials, while defending the health care system, have created a panel to investigate what happened that night. They’re also reviewing problems throughout the system.

“The issue is that we cannot prevent most of these emergencies,” says Dr. Olufemi Akingbola, medical director of University Health Services.

Akingbola says he and his colleagues must fix the system to ensure it can respond adequately to emergencies like Alaran’s collapse.

When students found Alaran unconscious that night in early May, they carried him outside for fresh air. One called the emergency number of University Health Services to request an ambulance. The response: An ambulance stationed at Jaja Clinic, a student health facility a five-minute drive from Independence Hall, would be on its way.

While they waited for the ambulance, students tried to keep Alaran alive. A medical student administered chest compressions. Egbe says Alaran jerked, his chest bouncing up and down, but did not recover consciousness. Another student attempted mouth-to-mouth resuscitation.

“People were thinking that it was an asthma attack,” Egbe says.

Some students used inhalers in an effort to revive Alaran, but nothing worked.

Egbe ran to hail a taxi, but no driver was willing to accept the risk of a student dying in his vehicle. So Egbe took an okada, a small motorbike, to the clinic, where he saw the ambulance, parked. It was another few minutes before a nurse entered the ambulance with Egbe and the driver took off. En route to Independence Hall, the ambulance came upon a student transporting Alaran by car, so the driver turned around.

A friend carried Alaran into the clinic. Egbe, who watched from the window, says clinic staff administered oxygen but Alaran’s mask kept falling off. Alaran had no vital signs, according to a university report of the incident.

After Alaran was declared dead, the clinic staff asked students to get Alaran’s Clinic Card, the card patients must present to receive treatment at the clinic. The students were shocked; they felt the request was insensitive.

The university defends the request, stating in the report that Alaran had already received immediate emergency care. The card would have given the clinic information about Alaran’s medical history, including whether he’d had recent health problems, Akingbola says.

It’s not clear why Alaran died. No autopsy was conducted, and Alaran’s family did not speak with Global Press Journal. Alaran had only been to Jaja Clinic once, according to the university’s report on the incident, and that was when he registered there. His medical record did not indicate that he had any sort of medical condition. But students who saw Alaran pass out on the floor of Independence Hall say their concern isn’t as much about why Alaran died, but that it took so long for him to get emergency treatment that might have saved his life.

Jaja Clinic has three working ambulances, but on the night of Alaran’s death, only one driver was available. When Alaran’s friends called for help, two other cases were in progress – a ruptured appendix and a femoral fracture. The sole ambulance driver was transporting those patients to an off-campus hospital when Alaran collapsed.

The clinic will soon have two drivers per shift, Akingbola says.

Olamide, a student who asked that his last name not be used for fear of disciplinary action, says he went to the clinic to get tested for a possible urinary tract infection. When he returned for his test results, he was told they could not be printed because the electricity was out.

“There is no fast treatment in Jaja,” he says. “They won’t attend to you quickly.”

Several times he says he has seen clinic staff watching television or socializing when they should have been working, he says.

It was three days before Olamide was treated, he says. Even then, the clinic could not fill his prescription, and he had to go elsewhere to get his medicine.

Other students complain that it is too difficult to get a Clinic Card. The application requires a chest X-ray that costs 1,200 naira ($6), a urine test, an eye test, a general checkup and a doctor visit. Egbe, the student who saw Alaran the night he died, says he tried to get his own Clinic Card but that the clinic’s hours made it impossible.

“We had been waiting for hours in front of the doctor’s office,” Egbe says. “Then, we were told that they had closed for work. It was only 2 p.m.”

He never got his card. He has not used the clinic. When he falls ill, he goes home for treatment.

Student concerns are compounded by the fact that the clinic’s emergency team doesn’t always respond to calls for help.

Jaja Clinic has four emergency lines. When a Global Press Journal reporter dialed those lines in Adewole’s presence, one didn’t ring at all. Another rang but no one picked up. A third was answered by someone who seemed unprepared to respond to an emergency.

Had the university’s health system been fully operational, Alaran would have been treated at a health post at Independence Hall, just seconds from the common room. But on the day of Alaran’s death, the door to the post was locked. The net around the window was torn. Cobwebs hung on the door.

Adewole was unaware the health post was not in operation, he says.

That health post opened in December 2011 but only operated in 2012 and 2013, says Bolaji Suberu, the chairperson for Independence Hall and a five-year resident. He and other hall executives had asked University Health Services to reopen the post. Akingbola, the medical director, was scheduled to visit the post a day before Alaran died but did not.

Had the health post been open, perhaps Alaran would have received immediate medical care, Suberu says.

University Health Services was created to serve the university community, which numbers more than 20,000 people. But some 72,000 people are registered at Jaja Clinic, Akingbola says.

Each day, the clinic sees an average of 250 patients, he says. A few dozen more come during the overnight hours. A staff of 169 must attend to all of those patients, Akingbola says.

The clinic was created to serve the university community alone, but it is located in an area that offers few other treatment sources.

“Jaja is the only functional public health facility – from Moniya to Mokola, you cannot get any other one that’s functional,” Akingbola says. “That means anything that happens around there comes here.”

Under Nigerian law, the clinic cannot turn away patients.

Students complain that Jaja Clinic staff won’t treat them until they show their Clinic Cards.

Health care workers have walked out demanding better equipment, better work environments and better pay. The Nigerian Medical Association went on strike for three months beginning in July 2014, according to local reports. The Joint Health Sector Unions walked out from November to February.

Jaja Clinic staff members were pressed to strike with their unions. NMA officials even visited the clinic to try to force the doctors out, Akingbola says.

But a walkout would have left the university community without health care.

“Jaja staff were caught in the web, obeying their national body and also their statutory responsibility to the community,” Akingbola says.

Doctors at Jaja Clinic decided to provide skeletal services, and only in life-threatening emergencies.

“They opted to save lives and at the same time obey their national body,” Akingbola says.

With other government-owned hospitals and clinics on strike, many Nigerians in the area turned to Jaja Clinic for care.

During the walkouts, the clinic staff made concessions for people in need of medical treatment, especially for those who needed to be referred to other facilities, Akingbola says.

When necessary, Jaja Clinic refers patients to other hospitals, including University College Hospital, but those facilities were not operating at the time, he says.

“At the end of the day, the community was not pleased,” he says. “The staff made sacrifices that were not noticed. It is quite unfortunate.”

Akingbola says a current proposal would create two strands of service: One devoted to university students and another devoted to staff members, their dependents, and area residents.

That proposal would ensure better medical care for everyone, he says. Students would be seen faster and get better attention. Clinic staff would be better able to track communicable diseases.

“If you have someone with chronic cough, who has been coughing for over three months, you will want to have a look at the roommates,” Akingbola says. “You can track infectious diseases better. Those are the components of students’ health services that we were trying to build.”

Akingbola did not say what the services would cost or who would pay those costs. It’s not clear when the university hopes to enact the proposed changes.

It might take more than a new proposal to win students’ trust.

Daphne Ekpe, chairperson of Queen Idia Hall, says two emergencies occurred in her hall in the hours after Alaran died. She didn’t call for an ambulance because she knows the health service to be unresponsive.

“What had already happened that night, I knew that I could not rely on the ambulance,” she says.

Both of those students were transported to Jaja Clinic by motorcycle, Ekpe says.

Some students look for alternatives to Jaja Clinic. When Olamide has a cold or fever, he goes off-campus in search of a helpful pharmacist.

“I will never go to Jaja again,” Olamide says. “If it is serious, I will go home.”

He hopes the system improves.

“If nothing changes, this thing can still repeat itself,” he says.