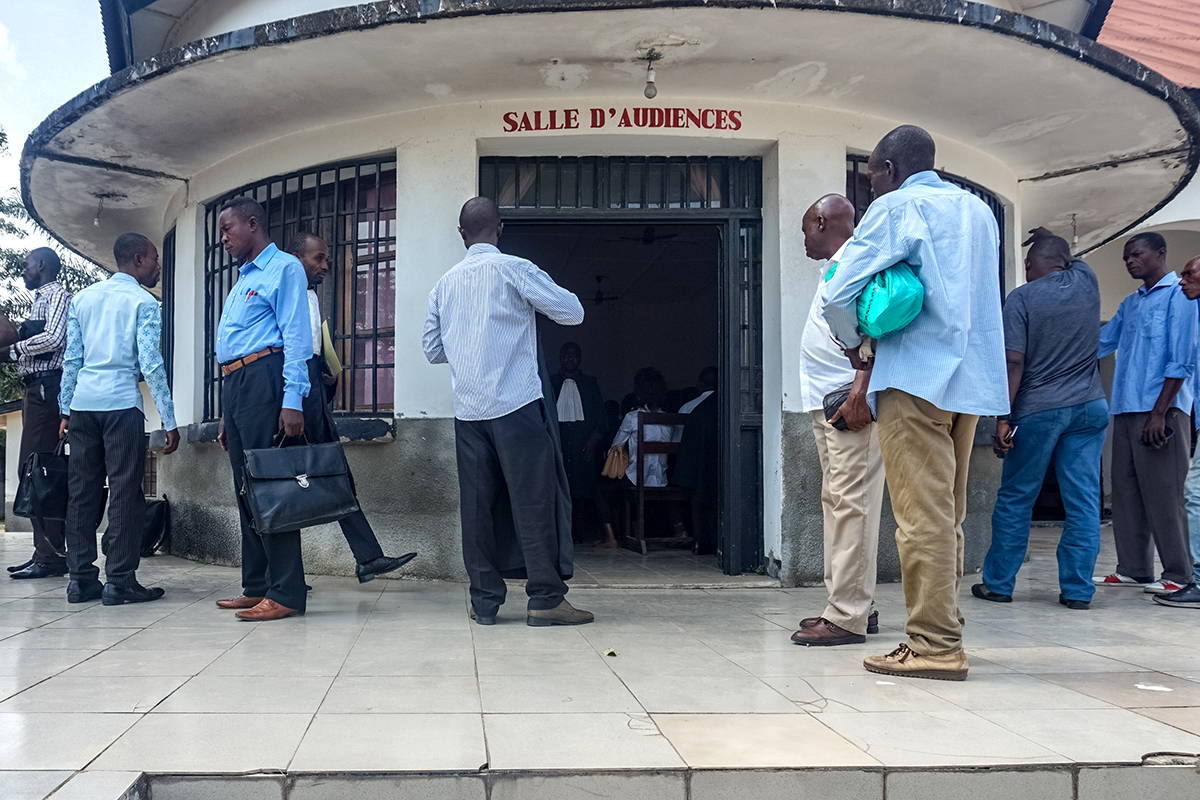 KISANGANI, DEMOCRATIC REPUBLIC OF CONGO — Every day, Ben Kitenge Kambi is outside the local labor court, under the scorching sun.

He says he’s waiting for justice.

A few months ago, Kitenge, 63, filed suit against his employer, Régie des Voies Aériennes, the national air transportation board, where he has worked since 1978.

“I’ve worked hard for the good of this company, but I no longer get my paycheck,” he says.

Things started to change in 2006, Kitenge says of his decades-long engagement with the company. His salary, approximately $94 a month, began coming in pieces. Sometimes half. Then, eventually, not at all.

Congolese law does provide for retirement payments, which Kitenge says he is owed, based on his long service to the company, but he hasn’t received any payment for nearly a decade. He says he had no choice but to take his employer to court.

But justice isn’t coming swiftly. Kitenge filed his suit back in 2017, but it hasn’t been heard or even reviewed yet.

Without the money to hire an attorney, all he can do is wait.

“To be honest, I have no idea what to do,” Kitenge says. “This court offers no hope for justice.”

The number of cases filed at the labor court here is on the rise. The court was created in March 2016, after labor-related cases had overwhelmed the local high court, which also has a backlog of criminal and civil cases, says Aurelien Kajangu Ndusha, presiding judge of Kisangani’s labor court.

Ndusha acknowledges that the court isn’t functioning properly. He blames a shortage of judges for the delays, while others point to corruption.

Ndusha says that more than 600 cases have been filed since the court was established, just 237 of which have been settled. Another 106 have been heard, but the verdicts are still pending. And 257 cases have yet to be heard or reviewed.

Ndusha says he offered jobs to 12 judges in January 2018, but just five accepted. The other seven refused the job offer, citing low salaries.

The monthly pay for judges is 1 million Congolese francs ($619), which is significantly more than the country’s average annual salary. Ndusha says the Ministry of Justice in Kinshasa, DRC’s capital, is aware of the shortage. He has requested more judges, but he’s waiting for the ministry’s response.

Albert Nembo, 57, has worked at a company in Kisangani, DRC’s third-largest city, for three years. He says his paychecks stopped coming after six months, but promises of payment kept him working. Now, he’s given up hope and filed a lawsuit.

“I’ve been with this private company for more than three years now. At first, I got my salary on a regular basis. And after only six months of working for the company, my paycheck stopped, and I haven’t gotten it since. That’s why I filed a case with the labor court,” Nembo says.

He declined to name his company for fear of jeopardizing his case.

To be honest, I have no idea what to do. This court offers no hope for justice.Ben Kitenge Kambi

But even as he waits for the court to hear his case, he says he isn’t hopeful. The court has already developed a reputation for ruling in favor of bosses, not workers.

“After my boss denied my pay, I filed a case, but the case remains pending in court. They always make me promises, but they’ve yet to keep their word. But, eventually, I quickly came to understand that they break their word because I don’t have money,” Nembo says, blaming corruption.

For the 237 cases the labor court has resolved, Ndusha declined to provide the ratio of verdicts for the employer versus the employee.

“What I can say is that all of the judgments were fair,” he says. “Me and my fellow judges are professional and committed to serving the community.”

Annita Makombo Losa, 58, works for a makeshift restaurant in Kisangani. She filed a case with the labor court after an ongoing dispute with her boss over labor conditions and violations.

“As a widowed mom, I do my best to provide for my kids. But my pay doesn’t allow us to live. My boss forces me to work like a horse, refuses to let me take breaks and requires overtime without paying me for it,” she says.

Makombo filed a lawsuit, but hers is one of the hundreds of cases yet to be heard.