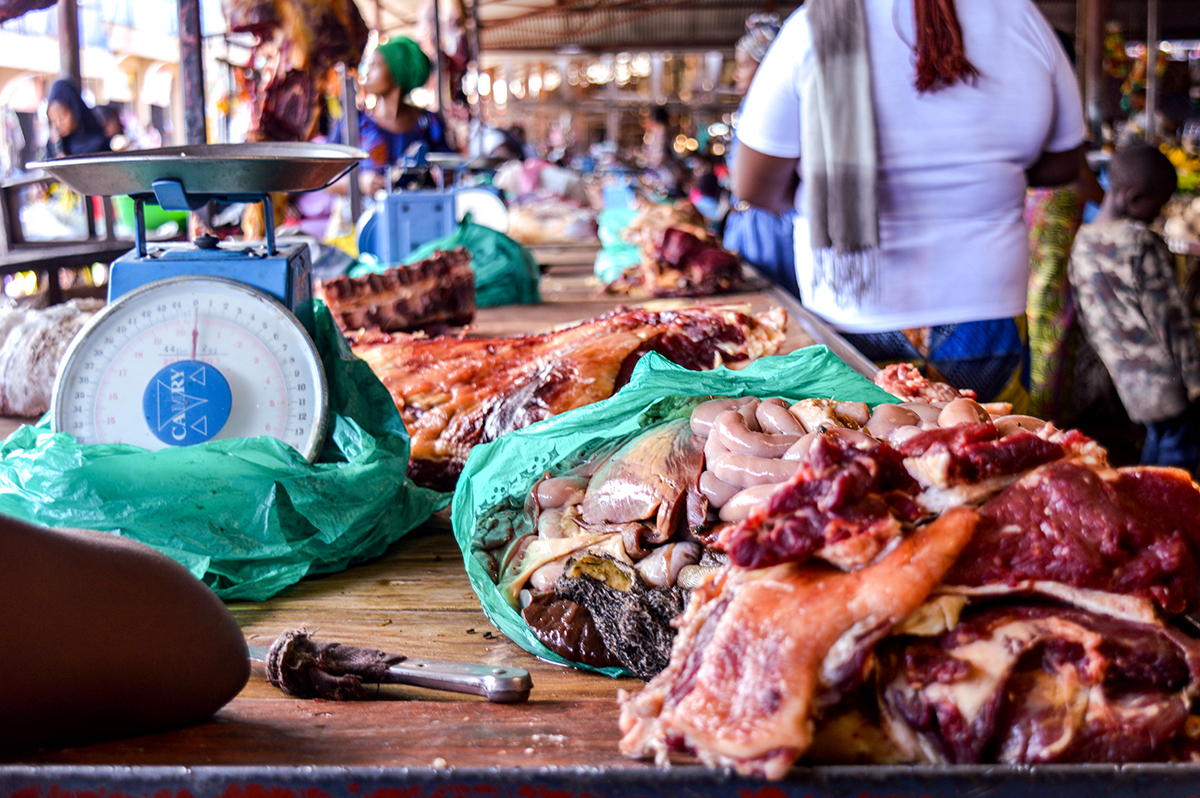 Considered to be a rare and expensive commodity in markets throughout DRC’s North Kivu province, nyama ya pori, or bush meat, is mostly available by special order.

Joséphine Katindi, 43, says she prepares the rare meat to surprise her husband and six children.

“Every single bite of bush meat is an experience of an unparalleled natural taste,” she says.

The bush meat available in Goma markets is mostly monkey and porcupine meat, says Michel Shako, who has been a bush meat trader for 20 years.

Traders in Goma buy bush meat from rural areas and then resell it in town for a steep price, he says. The meat sells for $15 to $20 per kilogram, depending on the type of animal.

“This business has become my sure path to make lots of money. People place their orders, and I supply them with monkey and porcupine meat,” says Shako, who is waiting for a plane to land at Goma’s airport from Kisangani. The plane, he says, is carrying several parcels of bush meat.

But the local demand for bush meat exists alongside the demand for other kinds of wildlife trafficking.

Animal populations are decreasing and endangered species are increasingly threatened because of both poaching and the high demand for wild meat in local markets across DRC, according to the Congolese Institute for Nature Conservation (ICCN). In the Garamba National Park located in the northeast of DRC, for example, about 65 percent of its protected animal species have disappeared over the past three decades.

“Wildlife traffickers hunt forests animals for diverse reasons,” says Prince Heritier Kabasele, a conservation consultant “There are those who kill them for the only purpose of eating them or selling their meat all over DRC.”

That falls under a category he calls national traffic.

“But there is also international traffic,” he says. “Where traffickers cooperate with rebels in the forest and sell some rare animals and their body parts on the international market.”

Often, it’s the same wildlife traffickers who kill porcupines to be sold as bush meat in DRC and hunt larger, rare animals like baby gorillas and leopards, he says.

The black market price for a baby gorilla can be as much as $5,000 though other sources indicate the price can be as high as $40,000, Kabasele says. The skin of a leopard can fetch $1,000. Other animals are hunted for their skin too, like the Okapi, a rare animal that is native to DRC and a cousin to giraffes.

“This is a trending business for different rebels groups that occupy forests in DRC,” says Kabasele.

On July 14, a group of journalists and park rangers were ambushed in the Okapi Wildlife Reserve in the Ituri forest in eastern DRC. Four Congolese rangers and one porter were killed. The attack was believed to be by rebels who are known to carry out illegal poaching and mining activities in the region, according to a statement from the Okapi Conservation Project.

There is no available data about the number of small animals killed and sold for bush meat in DRC, says Alphonse Mugheri, the office administrator for North Kivu’s environmental department.

“Our department lacks sufficient information about the hunting situation. We are working very hard to effectively monitor the sector, but to no avail,” he says. “Insecurity in our forests is at unprecedented heights. The armed groups continue to operate in our forests completely undisturbed, putting the future of the environment and tourism at risk.”

Article 78 of DRC’s Nature Conservation law says any person who kills, injures, captures or is found in possession of a specimen of any endangered wildlife species is guilty of an offence, and is, upon conviction, punished with one to ten years’ imprisonment and a fine of between 5 million and 20 million Congolese francs ($3,146-$12,584).

Poachers and unethical traders take advantage of DRC’s weak government monitoring to illegally trade in endangered species on the international market, according to Greenpeace.

Animal populations are decreasing and endangered species are increasingly threatened because of both poaching and the high demand for wild meat in local markets across DRC, according to the Congolese Institute for Nature Conservation (ICCN). In the Garamba National Park located in the northeast of DRC, for example, about 65 percent of its protected animal species have disappeared over the past three decades.

Christophe Mutima, communications officer at Community Conservation of Primates of Champunu, says the international trafficking of animals and the big local appetite for forest meat are putting wildlife at risk.

“If nothing is done, our rare species, those you can only find in DRC, will disappear,” he says.

Joël Miroza Minde, an environmental analyst based in Goma, agrees.

The loss of wildlife in the area is already visible, he says.

“Our region used to teem with lots of animal species, and attract many tourists who viewed the species as a feast for their eyes,” he says. “For example, Rwindi was the best area to see wildlife and take cute pictures of animals. Today, it’s still a charming place, but hard to find animals.” 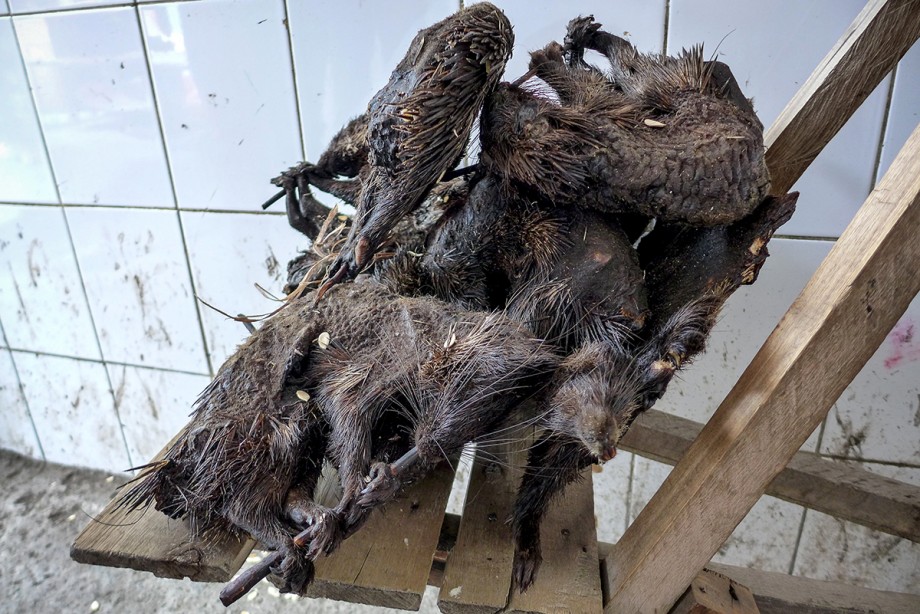 Porcupine meat, a popular variety of bush meat, was flown into Goma from a forest near the Congo River in the Tshopo Province.

“Some animal species have the same genetic baggage as humans, and bush meat is a potential pathway for zoonotic disease transmission,” Minde says.

Théophile Nyandwi grew up near Virunga National Forest and has fond memories of eating bush meat. He’s lived in Goma since 1993, but says he eats bush meat as often as he can. He dismisses health and conservation warnings related to his favorite delicacy.

“There are no significant health risks of eating bush meat,” he says. “Our ancestors loved eating bush meat, and it gave them exactly what they needed to live longer. Today’s life expectancy has dipped as bush meat currently remains off the menu.”

“There are people who place orders for porcupine’s guts and eat them as a cure for diabetes,” he says.

Minde knows there are still a lot of minds to change, he says, and awareness campaigns about the connection between hunting for bush meat and hunting for poaching will continue.

“It would be valuable to raise public awareness of the importance of wildlife protection. Now, the onus is on the government to do more to protect both the Congolese people and animal species,” he says.

Mugheri, of the provincial environment department, says political instability will continue to be part of the problem.

“Restoring state authority throughout DRC should contribute to significantly eradicating the consumption of bush meat, and promoting the protection of endangered animal species,” he says.