Skip to main content
The story you are reading was published on Wednesday October 25, 2017. To read more recent stories click here. 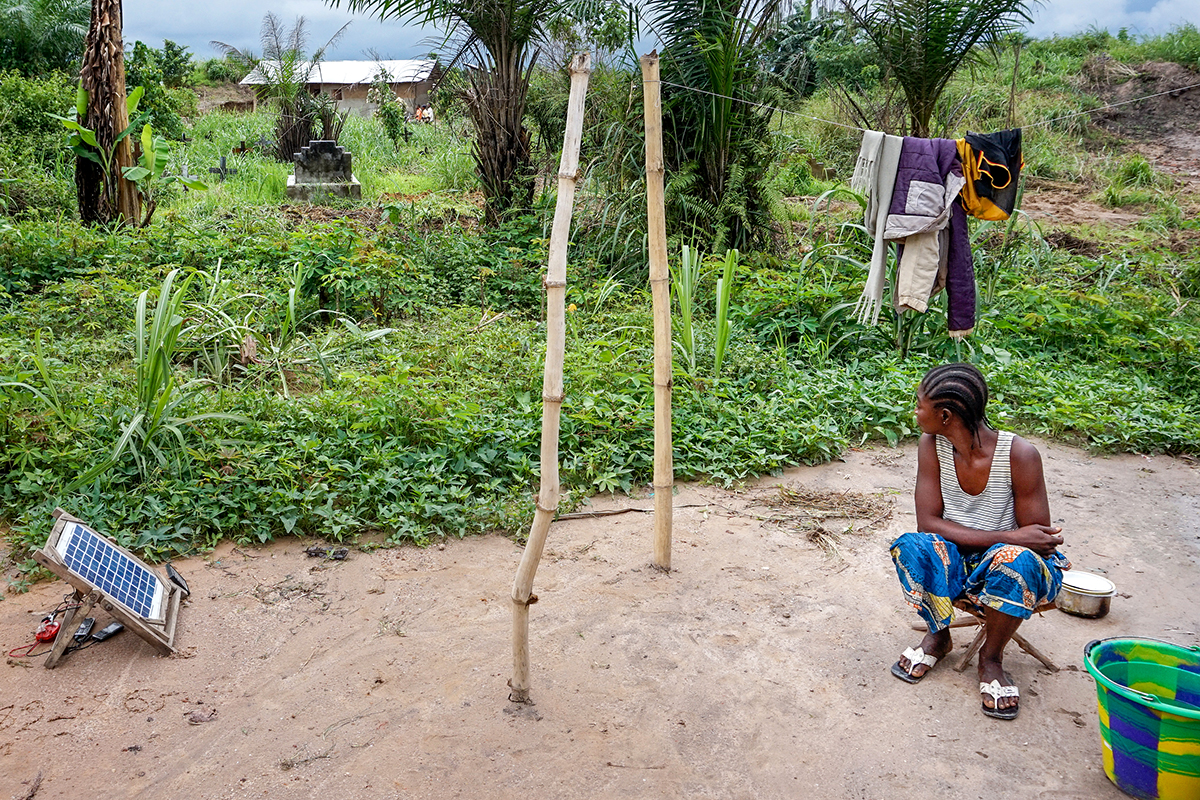 KISANGANI, DEMOCRATIC REPUBLIC OF CONGO — Ever since Laurent Bolamba buried his father in the city’s public Segama Cemetery 10 years ago, his family has made faithful pilgrimages every year to visit the grave.

But this year, when they arrived, they were met by a newly constructed house instead of the familiar grave marker.

“I was dumbfounded and devastated,” Bolamba says. “When we arrived, we discovered that my father’s grave had been desecrated to this extent.”

Bolamba says he wasn’t informed of any construction or changes to the cemetery, which has been there for more than 50 years.

But that’s because the construction was done illegally.

“They’ve built houses over graves, something that never happened before,” he says. 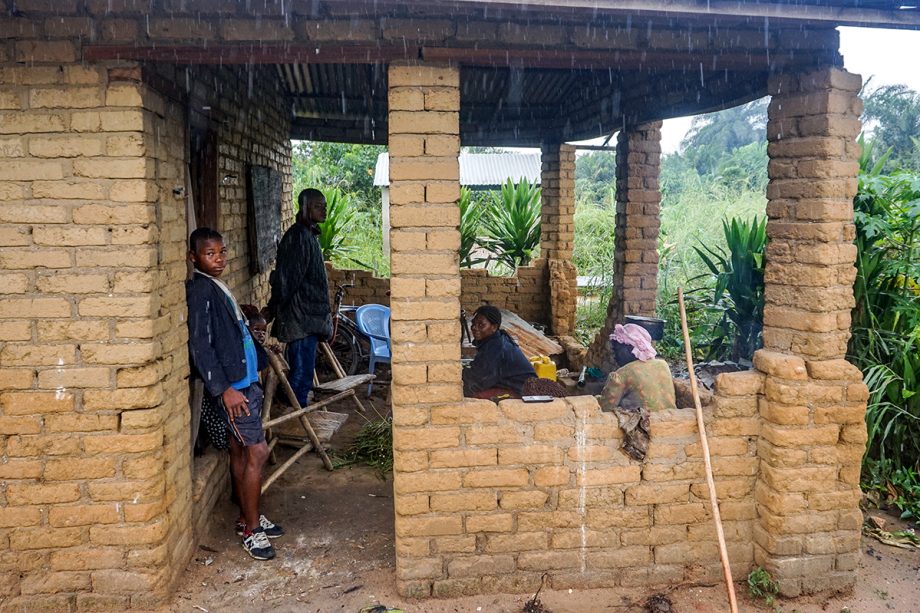 Dwellings are often constructed at night, under cover of darkness. Cemetery visitors say they are often surprised when visiting a loved one’s resting place to find a house where the grave marker used to be.

Desecration of graves in Kisangani’s public cemetery where the city’s poorest residents are buried, has become commonplace. Corruption enables midnight construction, making it common for structures to go up overnight on top of graves, surprising cemetery visitors in the morning. At Paradis Jardin des Morts, a private cemetery whose name means Garden Paradise for the Dead, grounds are closely managed, but burial costs are expensive. The city’s poor claim their rights are being violated and the bodies of their dead desecrated.

Kisangani is bordered by the Ituri Forest and the Congo River, making available land hard to come by. Residents accuse the public cemetery’s managers of accepting bribes that allow overnight construction, which has formed the “Mboka ya Sika,” a phrase meaning “New Village” in Lingala, a common language here.

At the city’s only private cemetery, burial costs range from $1,500 to $3,000. According to the World Bank, the average Congolese person lives on $400 per year.

Desecration of graves is against the law, says Alexis Pena Wonya, a local attorney.

“Anyone who issues the permit for the construction of a house over graves and anyone who makes use of it can be taken to the court,” he says, referring to the Tribunal de Paix, the local justice system. “People should blow the whistle on such crimes.”

If convicted, an offender can receive a sentence of one year in jail.

Wonya says a mayor in a nearby town was arrested and imprisoned in 2016 after illegally selling tracts of land in cemeteries. He says convicting such a high-profile resident should have curbed the practice, but didn’t. 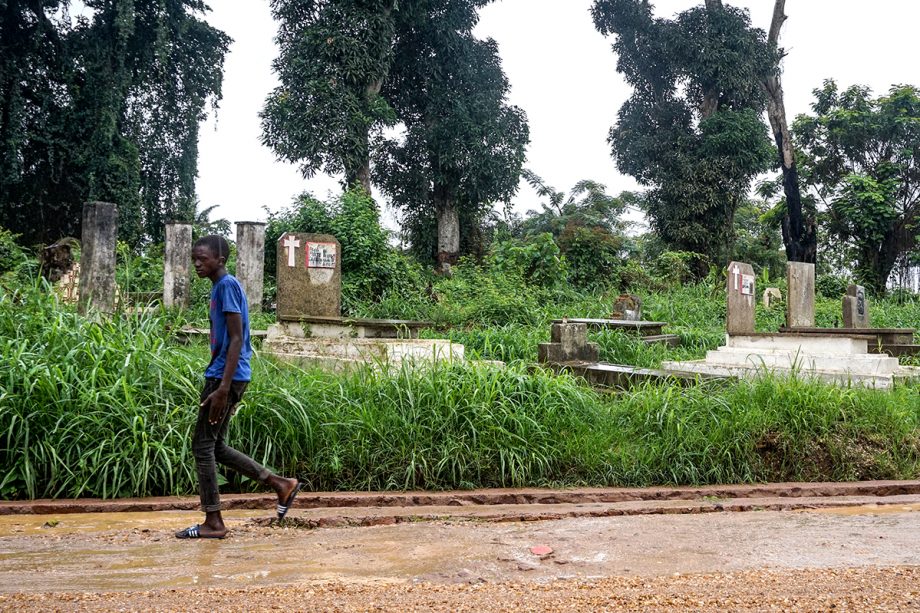 A young man walks past the public cemetery in Kisangani. Burial costs at the cemetery, where graves are routinely desecrated by illegal construction, range from $20 to $32.

When asked why people aren’t convicted after building homes under cover of darkness, Hylor Lolima, a neighborhood chief in Kisangani, says his hands are tied.

“Illegal construction in the cemetery is beyond my power to deal with, as it involves highly placed people,” he says. “When I call police, nothing is done.”

Baelo Ngombe, a resident of the Mangobo neighborhood, which is near the public cemetery, says he witnesses the nighttime construction in the cemetery regularly. He says the unearthing of graves to speedily construct houses is inhuman.

“Human bones and skulls are dug out of graves in a rude way to excavate for the foundations,” he says. “To be honest, it looks awful.”

But residents who now live on cemetery grounds say that they were issued building permits.

“I reside here, because I was issued with a building permit, and I even have the document here with me,” she says angrily. “Do you think I’ve stolen this document?”

The mayor of the Mangobo neighborhood, Victor Angalia, says he hopes to put a stop to desecration of graves in the public cemetery by asking the urban planning office to add fences to mark the boundaries of the cemetery.

“Everything must first be put in order by the urban planning office,” he says. “The area earmarked for the cemetery is not clearly demarcated.”

Residents who say they cannot afford Paradis have little hope that the corruption enabling building at the public cemetery will end. 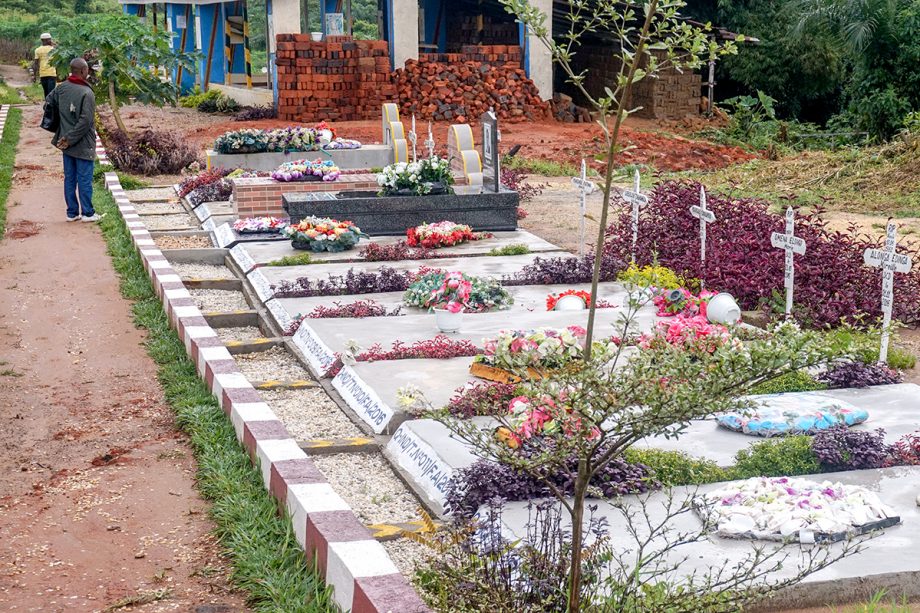 When Bob Kahindo visited his father’s resting place, he came upon a house instead of the grave site.

“I was disheartened to see that my late father’s grave had been demolished after six years only,” he says, adding that he doesn’t anticipate an end to the problem.

“For that reason, I am saving every single penny that lands into my hands so that when my mother one day dies, I can bury her in a private cemetery,” he says.