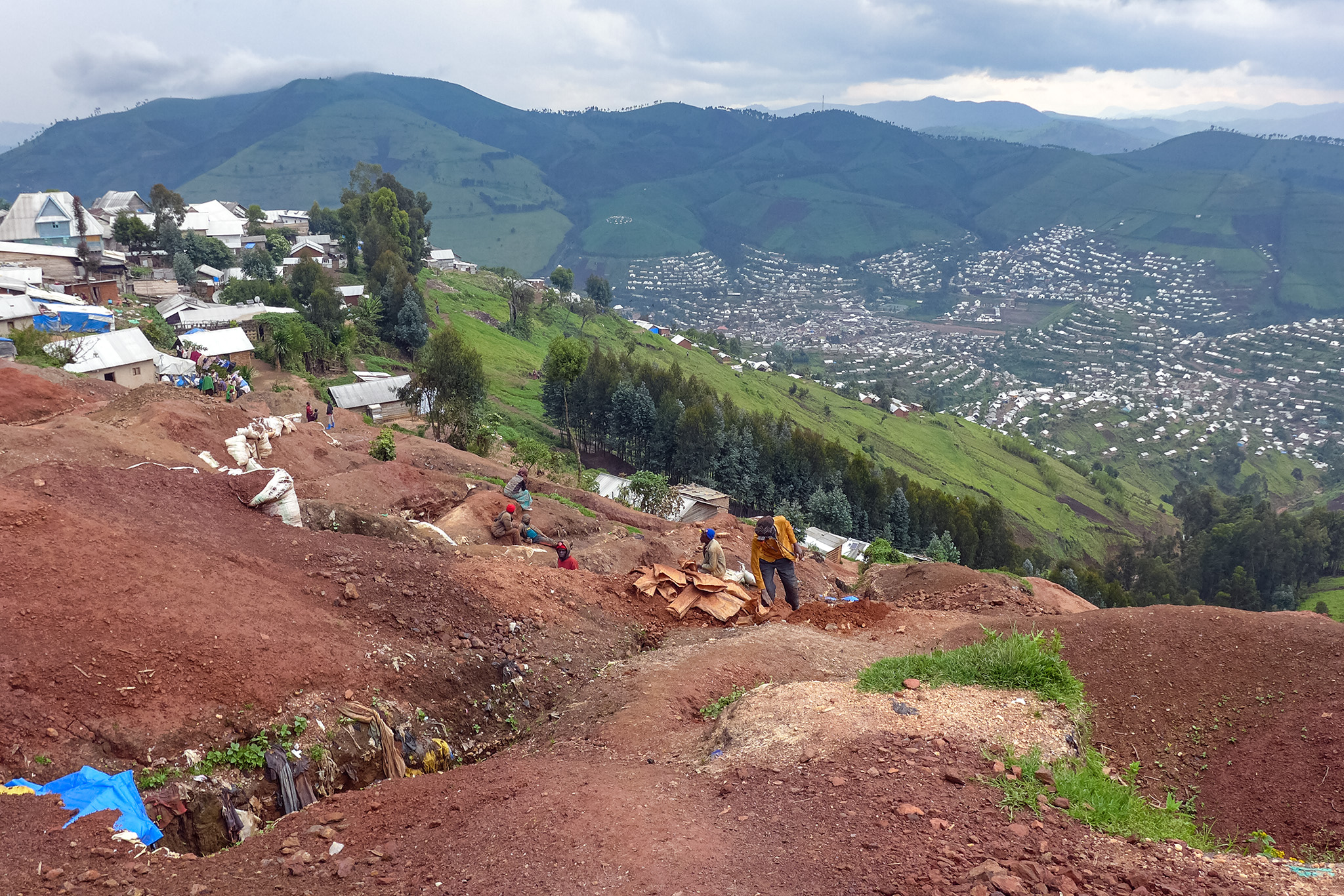 RUBAYA, DEMOCRATIC REPUBLIC OF CONGO – At the top of a hill in Rubaya, Masisi territory’s trading center, the word “Muderi” is very popular. That’s because it’s the name of the site where people mine large quantities of coltan and tin, minerals coveted for their widespread use in modern technologies like semiconductors for cars and mobile phones.

At least six days a week, men, women and children are in constant motion. The children fetch water. The women cook. Some men carry heavy bags filled with minerals, while others are busy digging. Each person hopes that one day, as long as they just keep poking and scraping through the dirt and rocks, they’ll get rich.

Over 2 million people in DRC earn a living from industrial or artisanal mining, according to an official report from 2015. A more recent study says the mining sector employs 11% of the formal labor force.

Rubaya, which sits 52 kilometers (32 miles) from Goma, the capital of the North Kivu province, is the largest coltan mining site in DRC. While the work can be dangerous and often leads to injuries, for the artisanal miners working here, there is another aspect of the work that is more painful. In recent years, many of them have endured repeated delays in payment, some lasting for months. 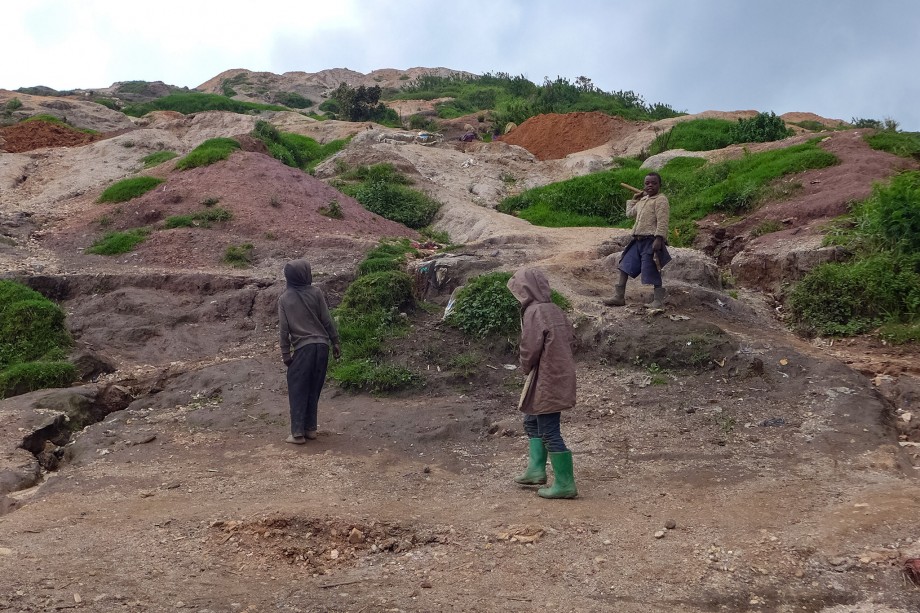 Children at the Muderi mining site in Rubaya receive small sums of money for their work helping the miners.

Most artisanal miners sell to the Société Minière de Bisunzu, or SMB, a company that is authorized to buy minerals found at Rubaya and sell them to the international market.

SMB buys between $3 million and $5 million worth of coltan each month from the roughly 3,500 artisanal miners in Rubaya, according to a report from April 2019 by Sofala Partners, a consulting group with a regional focus on sub-Saharan Africa.

But during the past year, miners like John Bizimana, 45, worked for as long as five months without getting paid. Bizimana has worked in the mines for 30 years. During the months without pay, he says his family members sometimes went to bed hungry.

“I had to take loans here and there to take care of my family, but at one point no one could lend me a coin as I was taking long to pay them back,” he says. He recently received two months’ worth of back pay but is still waiting on the rest of the money he is owed. 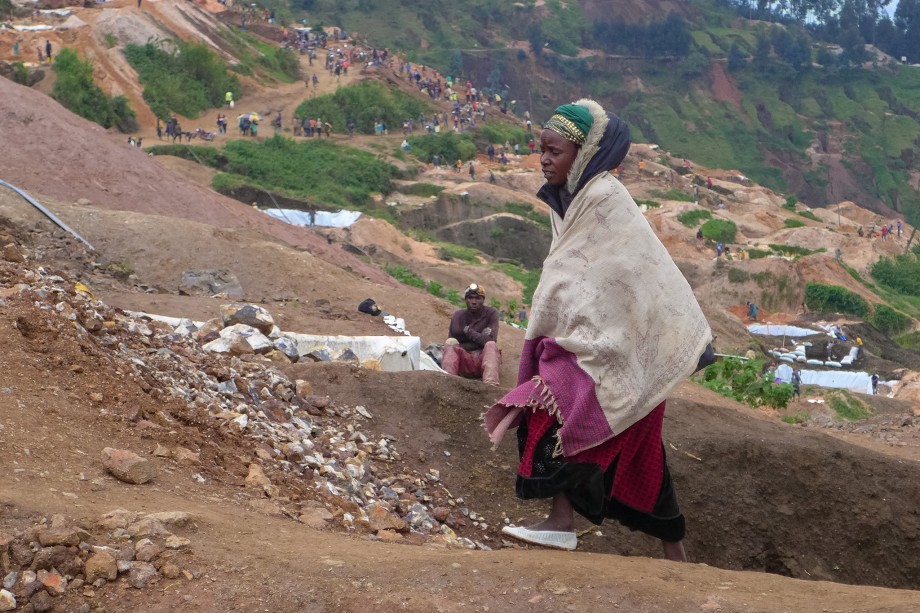 Kabuo Georgine, owner of a restaurant near the Muderi mining site in Rubaya, heads to the quarry to collect her payment from the miners, who take their lunch breaks each day between 12 and 2 p.m.

Increased oversight of supply chains that aim to ensure minerals are “conflict free” — that is, do not benefit armed groups — also have had an effect on payments. After an initial slump, the new oversight laws eventually led to a surge in mineral exports from DRC. For example, in 2016, North Kivu province exported a record-breaking 1,550 tons of tin (worth $11.7 million) and 1,121 tons of coltan (worth $35.9 million), according to The Enough Project, a human rights organization.

However, this system of traceability, known as “responsible sourcing,” does not benefit artisanal miners, according to an April 2019 report from the Danish Institute for International Studies.

Most traders now wait to be paid for the certified product at market before paying the artisanal miners who provided the minerals.

Critics say there is no excuse.

If the government had a well-planned strategy, such late payments could be avoided, says Fidel Bafilemba, coordinator of the North Kivu Civil Society Support Group for Traceability and Transparency in the Management of Natural Resources.

“The government must put in place measures to support investors by providing them with operating funds so they can pay the miners in case of short of cash,” Bafilemba says. 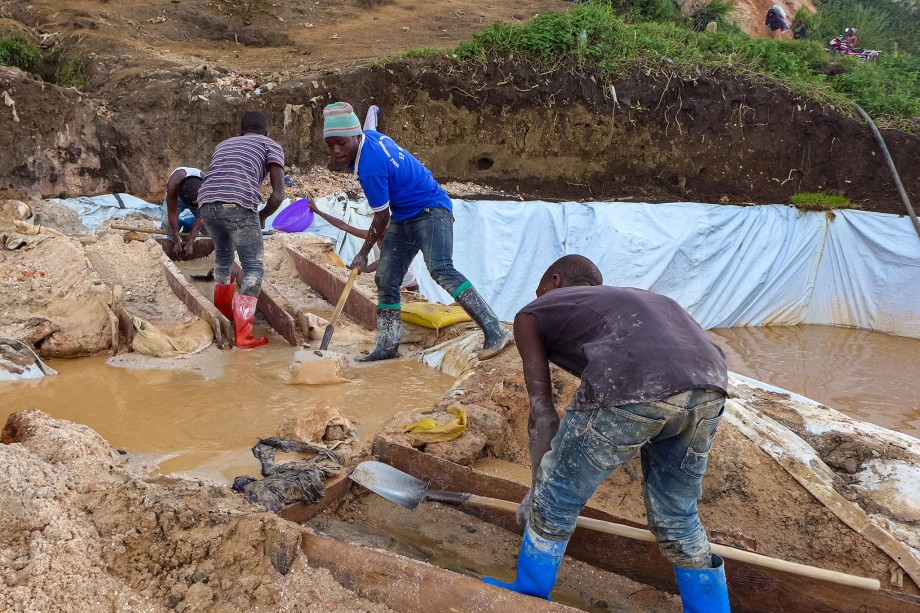 Using water and a basin, Rubaya miners separate sand from coltan, a necessary step in getting the mineral ready for sale.

However, he does not hold out much hope of that happening.

“There is much disorder in the management of the mining sector, corruption is found everywhere, and that is harming the economy of the country,” he says. Rubaya itself is known for high rates of mineral smuggling. Delayed payments to legitimate miners doesn’t help that trafficking problem.

In 2015, a group of experts from the United Nations found that between 20% and 40% of all minerals extracted in Rubaya are smuggled across the border to be sold in Rwanda, where buyers pay about 20% more than SMB. The smuggled minerals are tagged with counterfeit paper tags with bar codes, which look like the tags that are required to make minerals traceable from the mine to the smelter.

The same group of UN experts found that this informal trade of minerals is facilitated by the army, the National Intelligence Agency, the Mining Police, the Mining Division, and the Small-Scale Mining Assistance and Management Service.

Experts say the appeal of quick money pushes DRC miners to try smuggling to other bordering countries as well, including Uganda and Burundi.

“We can easily leave Rubaya with tourmaline,” says Fabien, a trafficker in the area who asked that his surname not be used. He was waiting for a friend, a lawyer from Goma, to give him a call, because they were ready to strike a deal with a potential customer. “The parcel of it is less heavy and easy to hide to the point that roadblocks aren’t difficult for us to cross.” 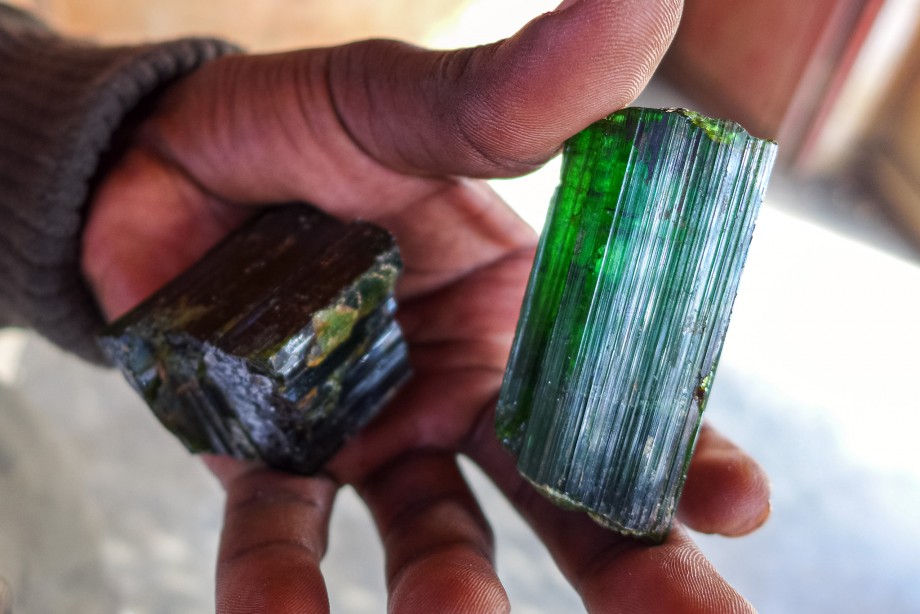 A smuggler displays tourmaline, an ore that’s highly sought by mineral traffickers. A gram can cost between $20 and $150, depending on the volume and quality of the stones.

Civil society groups in Rubaya say the only way to stop trafficking is if the government works harder to identify trafficking channels. They believe the profits that are flowing out of the country should stay in DRC.

“With a clear channel for the fight against trafficking and corruption, several achievements in terms of social welfare will be possible” says Philémon Nizeyimana Sebazungu, a Rubaya-based activist.

Meanwhile, SMB’s Stuyck-Swana says the company is getting back on track with the payroll. “At the moment, we are catching up on the miners’ payments. We have almost reduced our backlog, and at least 80% of the debts have already been paid,” he says.

Editor’s Note: This story has been updated to remove an inaccurate reference to U.S.-China trade negotiations.