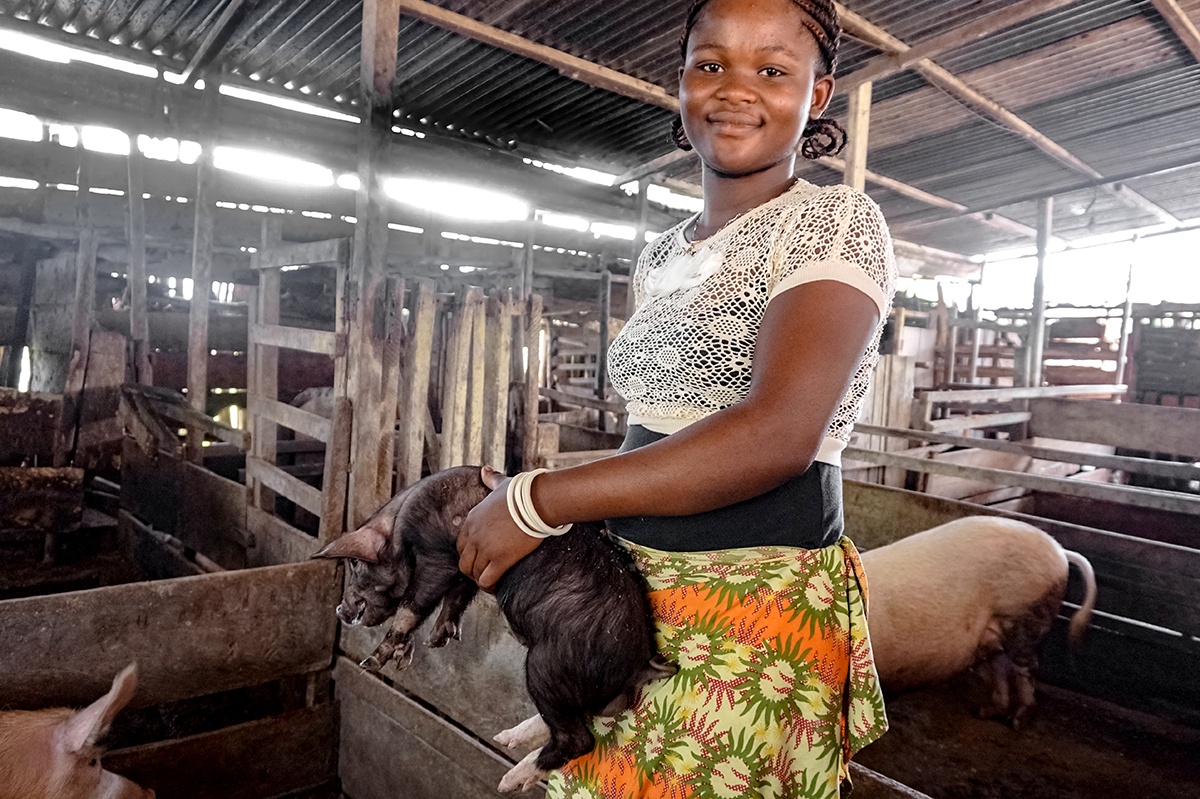 Once inside the gate, it’s easy to spot Mado in the pig pen, shovel in hand, clad in her trademark red, plastic boots.

“I started with two pigs, and that was no easy task, because pigs are among the most difficult animals to care for,” she says. “But I wasn’t put off, and the result is that today I have more than 100 pigs.”

Pigs, Mado says, are notoriously difficult to raise because they eat so much. She coordinates with restaurants in Kisangani to provide her pigs leftover food scraps. She says she works hard to keep her pigs healthy.

Livestock farming is not a popular trade in Kisangani, the capital of the Tshopo province and DRC’s third-largest city. People here rely on hunting bush meat in the forest that surrounds the city.

Socioeconomic studies show that most households here are heavily dependent on forest resources, which account for up to 80 percent of their income, says Faustin Mwinda Selemani, the secretary for Environmental Coordination for the city of Kisangani.

But there is another, more important reason Mado is working to persuade customers in Kisangani to buy her pork products: ebola.

In May, the Ministry of Public Health notified international public health agencies that eight cases of ebola had been identified in the Bas Uélé province, which lies just north of Kisangani.

Forest animals commonly eaten in Kisangani are at risk for ebola, says Benjamin Dudu Akaibe, the Director of the Center for Biodiversity Monitoring at the Université de Kisangani.

In an experiment this summer, Akaibe says, they had a local pork sample tested in virology laboratories in the United States, Belgium and Kinshasa, DRC’s capital city. The international teams concluded that it would be highly unlikely for a pig raised in Kisangani to carry the ebola virus.

But there is still ample business for all. During this time of year, there is a ban on hunting in the Ituri forest.

Effective August 1 until November 30, hunting wild animals is forbidden in the forests around Kisangani because many animals are in gestation and lactation. The measure is in place to ensure the survival of species in the forest. Hunting endangered species, like okapis, giraffes, western lowland gorillas and zebras is never permitted during the year.

“The hunting and sale of bush meat are strictly prohibited now,” Selemani says.

Livestock farming is key not only for preventing the spread of ebola but also quelling meat shortage in Kisangani during this time of year, he says.

Throughout the city, residents say they are grateful for Mado’s perseverance in pig farming for the good of the whole community.

“Mado has aroused my fascination with her undiminished efforts to carry out her farming activities,” says Mariam Masika, Mado’s neighbor. “She is ensuring the cleanliness of pig meat.”

Mado says she is happy to see other women embrace pig farming as a career, which she says is contributing to the development and health of the region.

She sells approximately five pigs per day during the period when forest hunting is prohibited, compared to two to three pigs per day in other seasons. But she says she can earn up to $400 per month, the average annual income in DRC.

Mado is using the profits from the busy season to expand her farm and meet customer demand.

Ndayaho Sylvestre, GPJ, translated the article from French and Swahili.