Skip to main content
The story you are reading was published on Friday September 29, 2017. To read more recent stories click here. 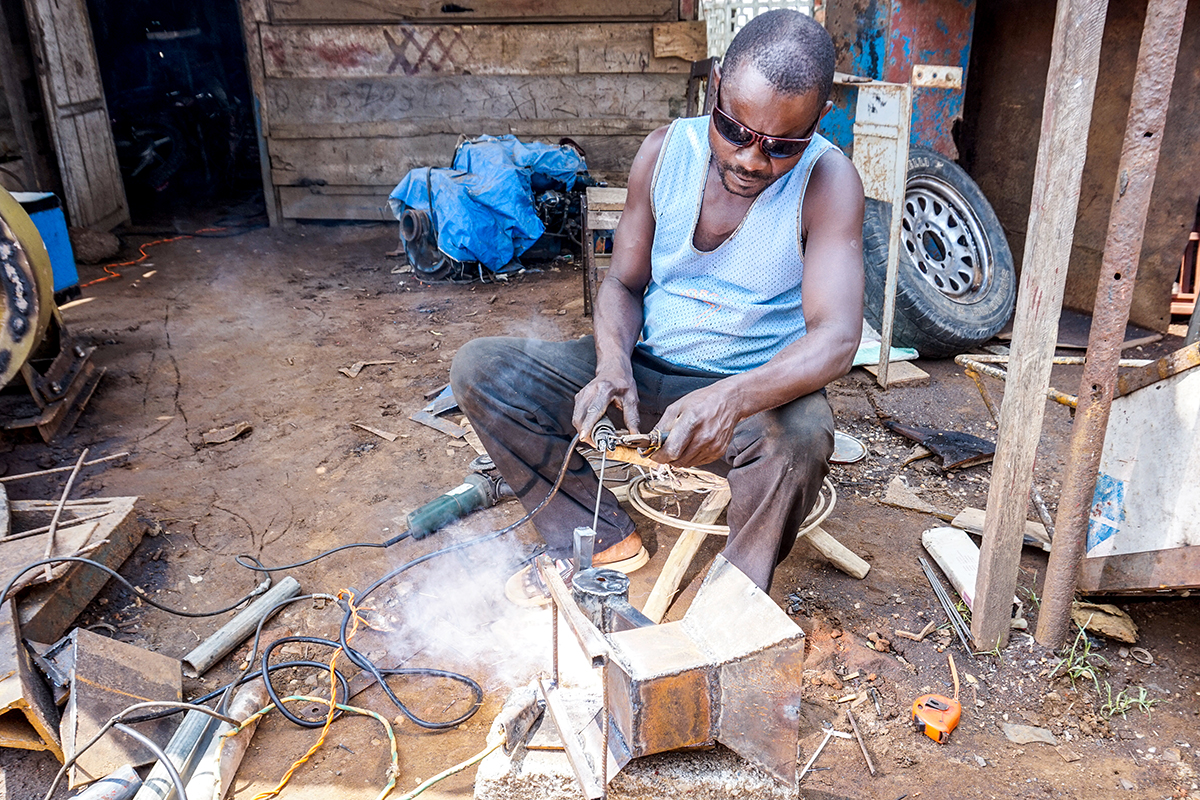 KISANGANI, DEMOCRATIC REPUBLIC OF CONGO — For most of his life, Jean Matulu, 45, worked as a licensed carpenter and cabinetmaker to support his 11 children.

Until one day, a radio program changed his life.

The program discussed the future impact of deforestation on the people of Kisangani, who rely on the surrounding Ituri forest for much of their livelihood, from hunting to gathering wood to burn. Matulu does not recall who was speaking or the name of the program, but its message stuck.

“I learned that the population will continue to grow, but the forest will not. It’s a big problem that needs a solution,” Matulu says.

The host of the show appealed to listeners to think about what they will leave for their grandchildren.

Matulu took the message to heart.

“From that moment, I started thinking about what I should do to save the future of my grandchildren,” he says.

Immediately, he says he focused his energy on figuring out a new way to make a brazier, the most commonly used cooking stove here. He wanted to create a brazier that did not require large amounts of wood or charcoal, both of which he now knew were harmful to the longevity of the forest surrounding Kisangani, the capital of DRC’s Tshopo province.

“This will be my contribution to the protection of our environment,” he says.

Once he knew about the impending danger of deforestation, he says he started to feel outraged every time he would see a truck full of wood or charcoal pass by his home.

“Every day I see these trucks and I think about the number of trees which have been burned,” he says.

Just like that, Matulu’s new passion to save the forest transformed his craft from woodwork to metal work. 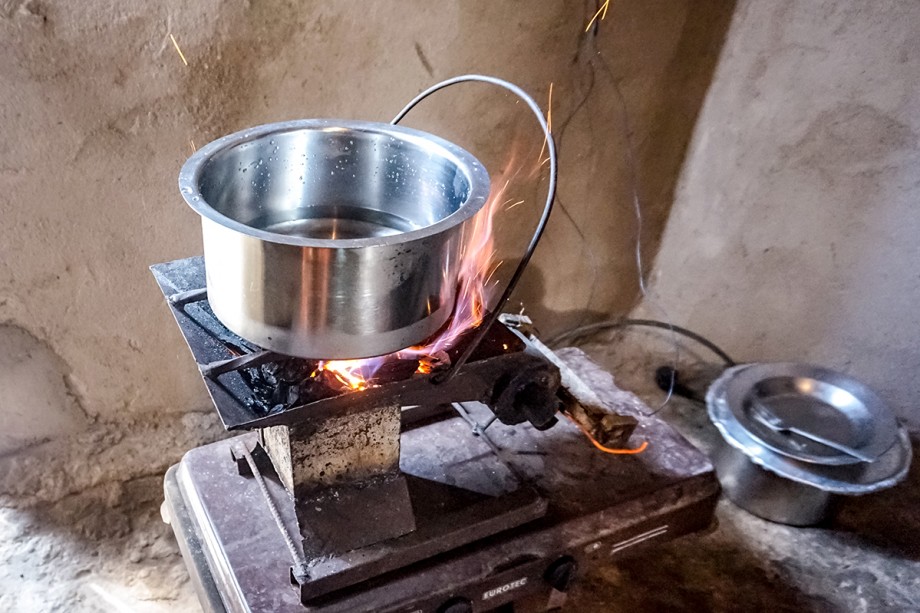 Jean Matulu’s battery-powered cook stove costs about as much as a single bag of charcoal and is helping to curb deforestation in Kisangani, the capital of DRC’s Tshopo province.

Sitting on a stool in his workshop on Boulevard Lumumba, he is surrounded by scrap metal.

He wears safety glasses to shield his eyes from sparks flying off his new invention — a battery-powered brazier.

“I made up my mind to help my fellow community members by introducing them to fuel-saving cooking techniques,” he says, noting that a majority of people here rely on wood and charcoal for their heating and cooking needs. “Households in this city of Kisangani use conventional braziers which consume lots of cooking fuel, causing the destruction of our forest resources.”

Matulu says his new business got off to a rocky start as people were reluctant to use a new kind of stove sold by a man who many people in the community did not know.

“At the beginning, I was obliged to go door to door, persuading people to buy the stoves,” he says.

Matulu persevered and, one by one, got people to use his battery-powered stoves.

“As a result of this job, I’m able to provide for my family. I now have teachers and authorities placing orders with me,” he says.

Matulu is the only manufacturer of battery-powered braziers here. Unlike other cook stoves, the battery-powered option uses about a tenth of the charcoal and can operate on charcoal dust, rather than a large lump of charcoal, he says.

I made up my mind to help my fellow community members by introducing them to fuel-saving cooking techniques.Jean Matulu, 45

Charcoal is made by cooking wood in a low-oxygen environment until it burns off water, methane, tar and other compounds. The remaining lumps of charcoal, when ignited, give off more energy per ounce than raw wood.

Forests cover 60 percent of DRC, according the World Wildlife Foundation.

In the Congo Basin, forests are disappearing at a rate of 700,000 hectares per year, a loss of 0.3 percent annually, according to the Food and Agriculture Organization of the United Nations.

Firewood and charcoal are two big reasons why. The two fuel sources account for more than 90 percent of the country’s energy consumption.

Mata Mosilo, a forest inspector in Kisangani, says the vast majority of indigenous people completely depend on forests for their survival.

“Forests are often burnt, causing climate disruption,” he says. “By and large, we should make our own rule of planting two or more trees for every tree cut,” he adds.

Additional innovative wilderness conservation projects are essential to protecting the forests in DRC, he says.

Matulu makes six or seven battery-powered braziers every day. He says he has sold 1,000 braziers in Kisangani in the last year.

But it is the cost savings to local families that has most spurred sales.

On average, a bag of charcoal costs $10 and lasts two to four weeks, depending on frequency of use. The same size bag lasts two to three months with his battery-powered brazier, Matulu says.

His small brazier costs $15. It’s $20 for the medium size and $25 for the largest version, which measures 50 centimeters in circumference. The stoves take a D-sized battery, which cost 32 cents for a pair. 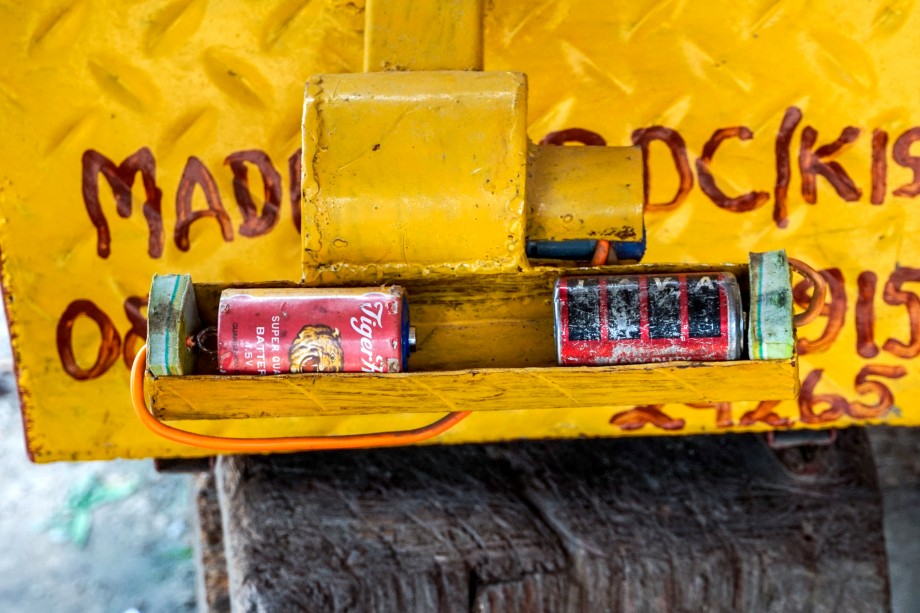 The batteries for Jean Matulu’s stove cost just 500 francs (32 cents) for a pair.

Emanuel Amuri, 36, a secretary at a local college, says he bought the battery-powered brazier for his wife so that they could minimize their monthly expenses. The stove cost the equivalent of just two bags of charcoal, he says.

“My wife has appreciated this kind of brazier, she even bought a second one,” he says.

Jose Masini, 30, a teacher, says the new stove is helping him save money too.

“Also, I do understand the impact that it’s going to have on our environment,” Masini adds.

As a single man, Alexis Kabambi loves the stove because it cooks so much faster than the old-fashioned model.

“I thought my eyes were deceiving me when I first saw this kind of brazier,” he says.

Mbili says the ministry is committed to helping Matulu market his stove to Kisangani’s nearly 168,000 households.