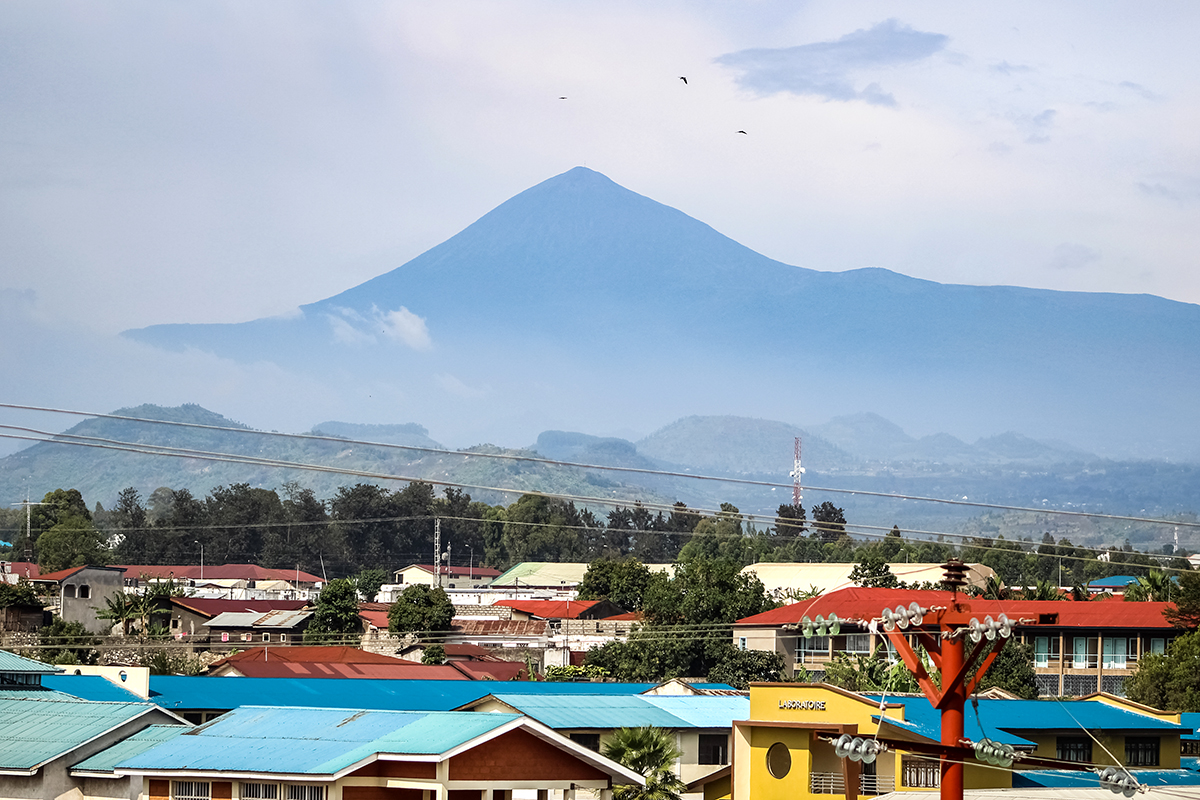 GOMA, DEMOCRATIC REPUBLIC OF CONGO — Goma, the capital of North Kivu province, continues to sprout new buildings, roads and residents in the shadow of the Nyirangogo volcano. Fifteen years ago, the volcano’s eruption covered parts of the city in lava, killing more than 100 people and leaving an estimated 100,000 homeless. 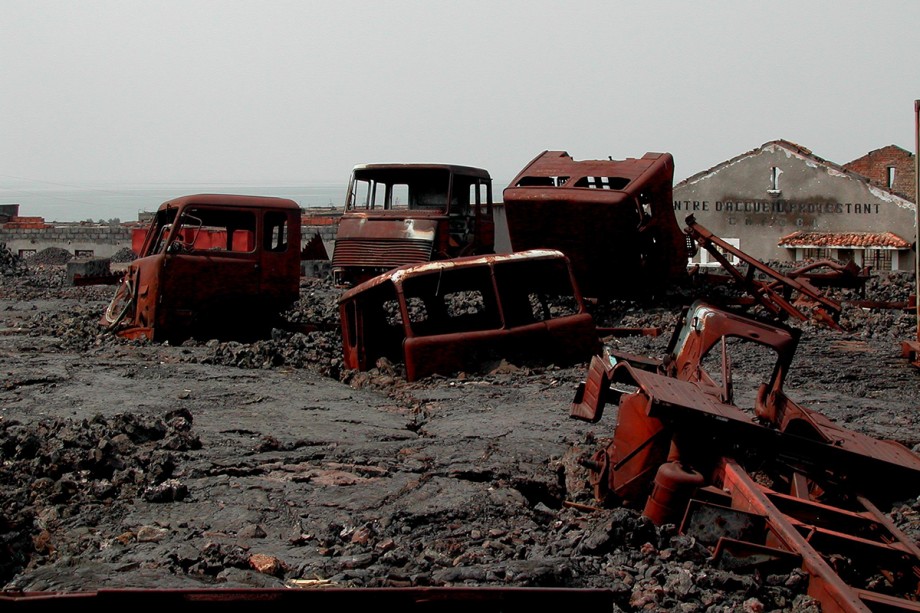 In this image provided to Global Press by the Observatoire Volcanologique de Goma, several vehicles are consumed by lava in the 2002 Nyiragongo volcano eruption.

More than 400,000 people fled the city when a great lava stream up to two meters (6.5 feet) deep seethed into Goma, which lies just 20 kilometers (12 miles) north of Mount Nyiragongo.

Nyiragongo’s eruption wrought havoc on the region’s economy, which shrank by 80 percent, says Kacho Karumu, director general of the Goma Volcano Observatory (GVO). Among the most devastated areas were the neighborhoods of Majengo, Murara and Virunga, and a portion of downtown where the lava streamed into Lake Kivu, forming a huge lava stone ball. 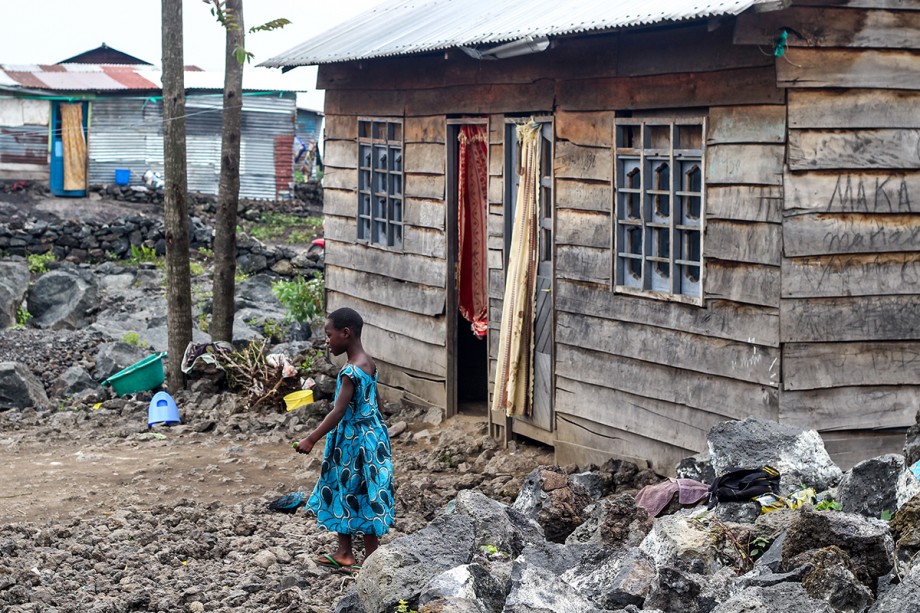 Kasole Mwamini stands in front of her parents' rebuilt house in Goma’s Murara district. Volcanic lava passed through it during the 2002 volcanic eruption, and the original structure washed away.

Today Goma continues to rebound. New houses and a few hotels are built directly atop layers of molten lava rock. Roads have been reconstructed, an airport expansion is ready to begin and the city has grown larger than before the eruption, with a population of about 1 million people.

Caught between lava and despair for so long, no one today is immune from feeling pride that Goma is taking on a new shape. 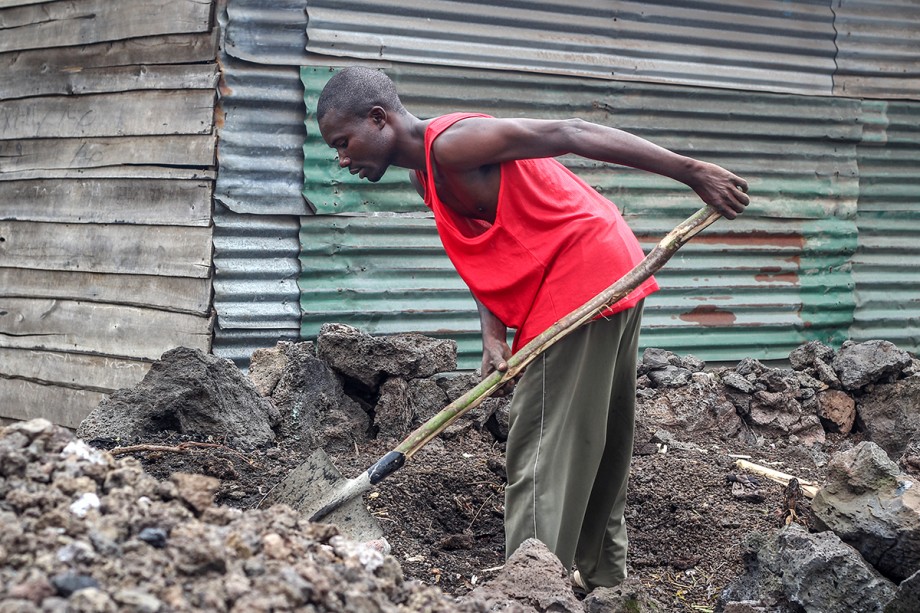 A man digs volcanic stone in Virunga, a neighborhood in Goma. 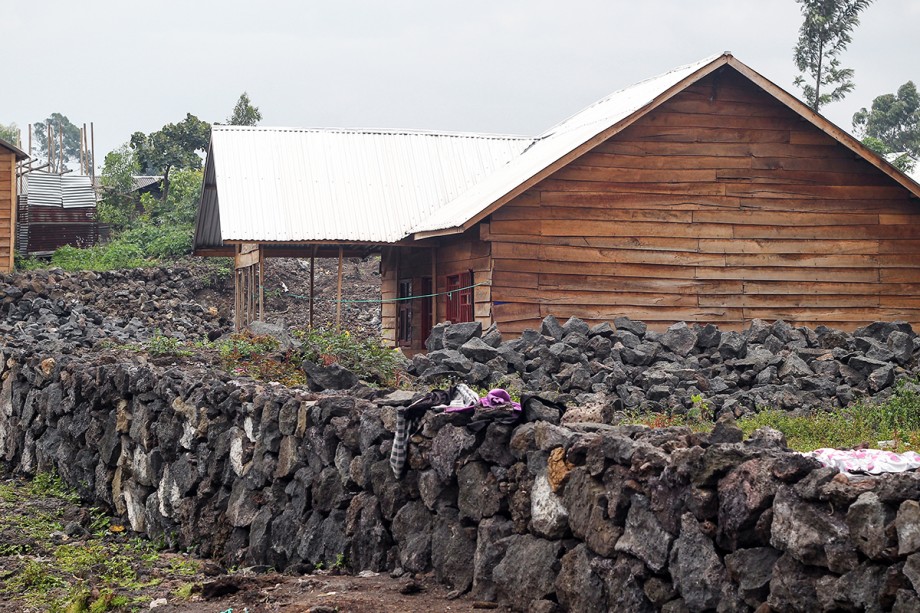 This home in the Majengo district of Goma was built on volcanic stone after the 2002 eruption.

Volcanic stone left from the disaster is used to build roads and roundabouts, and is cheaper than brick or cement. Before the eruption, Goma resident Marc Kasereka says he had to walk more than 3 kilometers (nearly 2 miles) to public transportation to catch a ride to work. 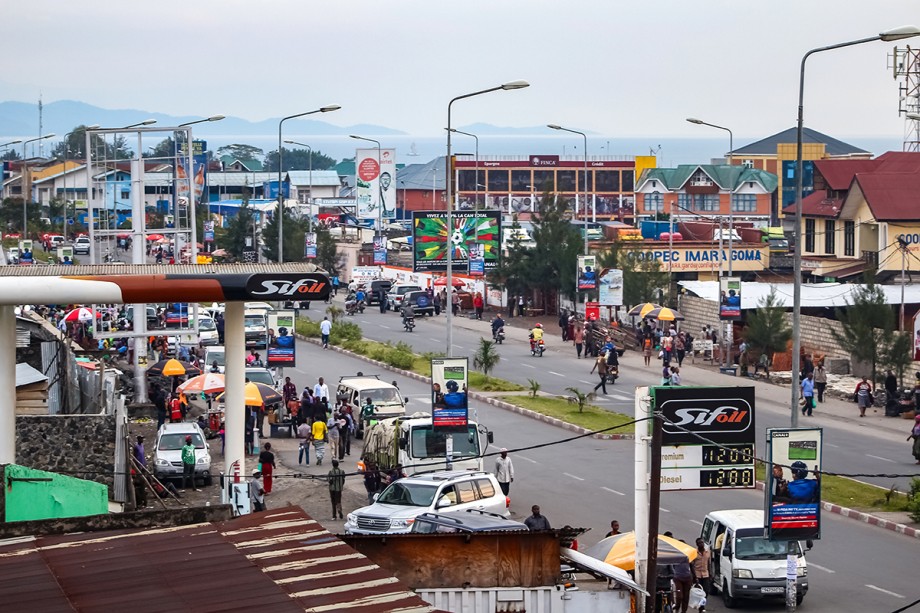 New houses, roads and gas stations have been built since the 2002 Nyiragongo eruption. This shows the districts of Murara, Virunga and Majengo as well as part of Goma’s city center.

Munyerenkana Machozi, a resident of Goma for more than 30 years, takes pride in the city’s resurrection. She says the eruption of Nyiragongo paved the way for the authorities and residents of Goma to give new shape to the city.

“What a joy to see this beautiful reborn-again city of Goma looking more beautiful than before,” Machozi says. 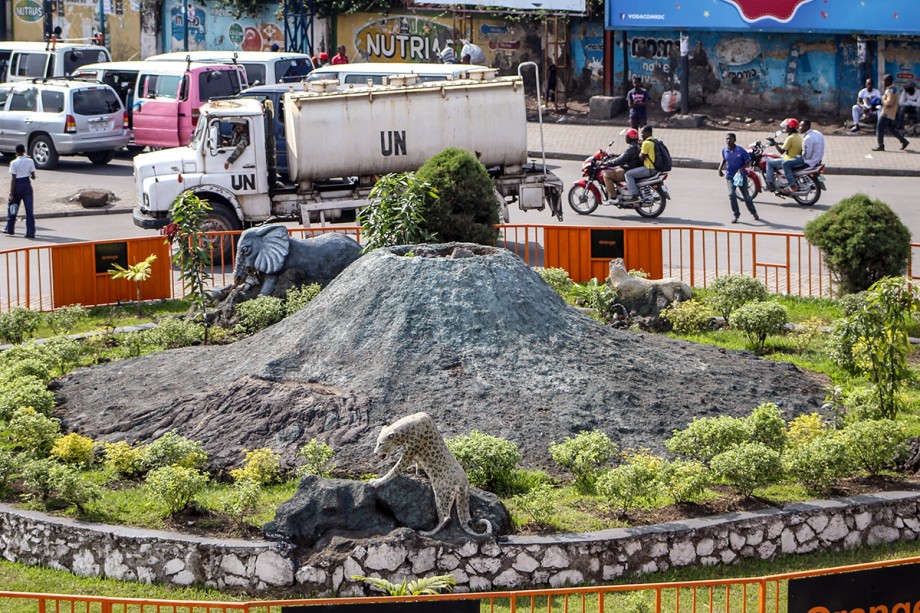 This roundabout shows the volcano with various wildlife species.

While Goma’s residents appreciate the city’s recovery, they continue to live under the threat of the majestic Nyiragongo.

Stratovolcanoes, like Nyiragongo, which are made up of alternating layers of lava and ash, are the most picturesque and the most deadly. 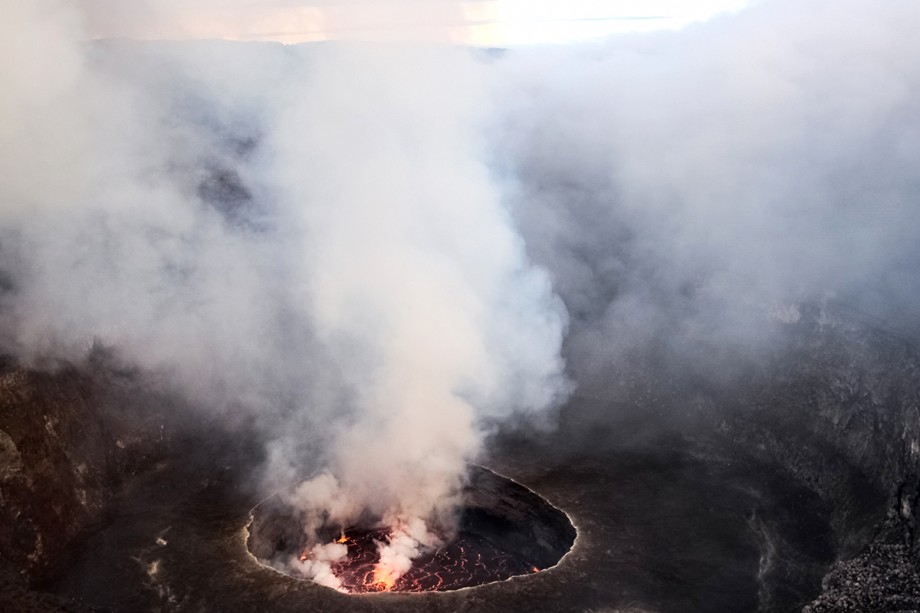 The Nyiragongo crater, with a giant lava lake below, spews smoke in December 2014. Nyiragongo is a stratovolcano made up of alternate layers of lava and ash.

Geologists say Nyiragongo is one of the most dangerous volcanos in the world. In 2016, the volcano began emitting rumbling sounds when a new fissure erupted on its east side. Virunga National Park, where Nyiragongo is located, advertises visits to watch lava spurt from the fissure.

INSIDE THE STORY: Fifteen years ago, GPJ reporter Esther Nsapu watched with horror as the eruption of Mount Nyiragongo destroyed her hometown. Here, she discusses what it’s like to witness and write about the opposite – a city rebuilding and thriving. Read the blog.

Meanwhile, Observatoire Volcanologique de Goma, a scientific institute which studies environmental consequences and monitors Nyiragongo and another nearby volcano, Nyamuragira, as well as methane gas in Lake Kivu, has set up an early warning siren in Goma’s city center. The government will signal residents if or when Mount Nyiragongo erupts again.

And though an evacuation plan is in place, including rescue stations along the route out of the city, many residents don’t like to think that another disaster as large as the one in 2002 will happen again. 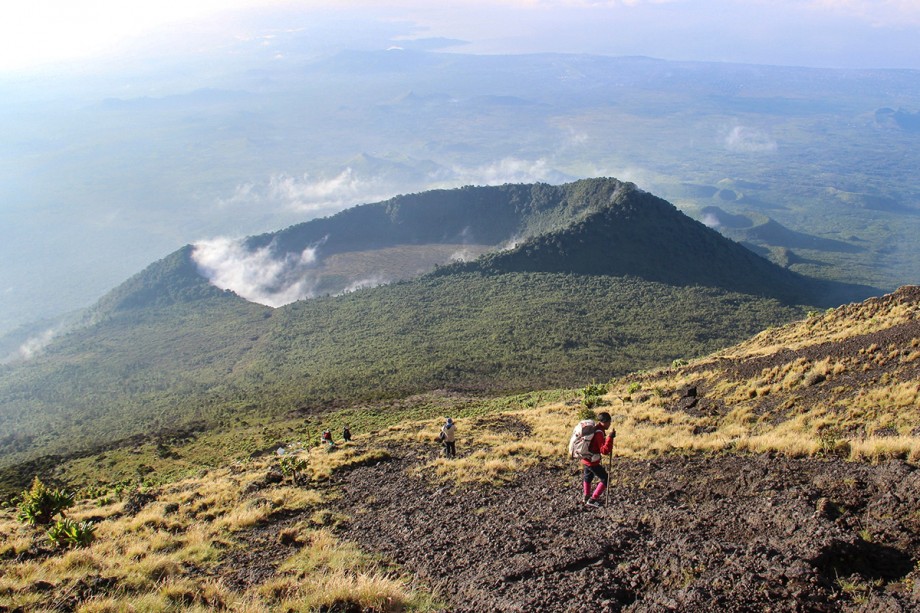 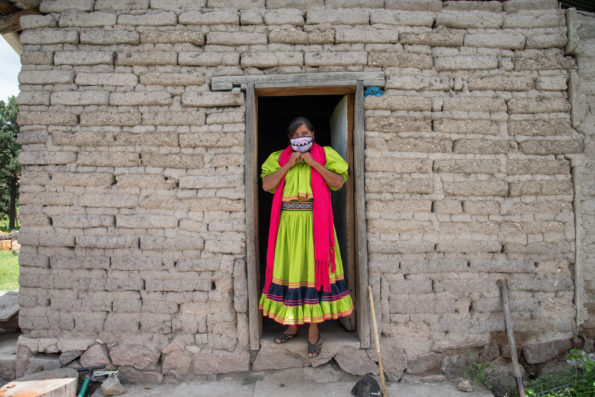