Skip to main content
The story you are reading was published on Thursday January 4, 2018. To read more recent stories click here. 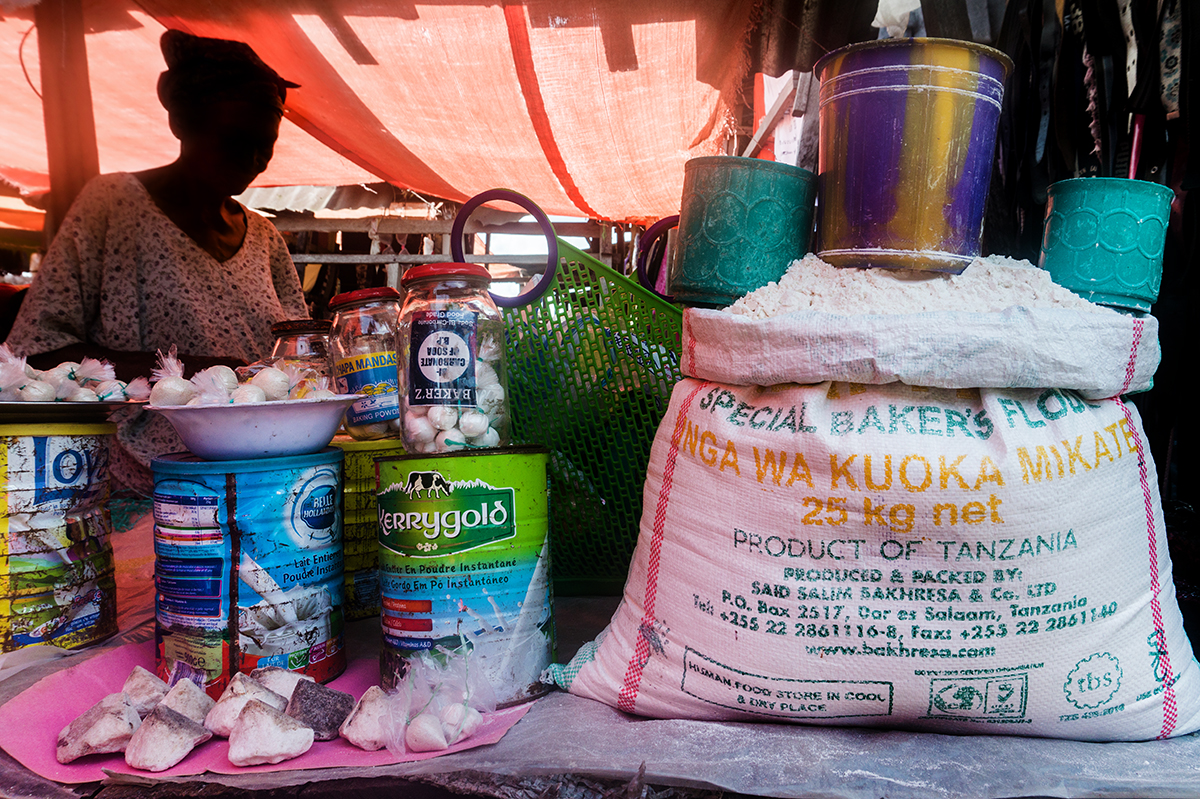 “Bei ya muzuri!” she shouts in her native tongue, Kiswahili, which means, “Come and get it at the best price!”

It is almost noon and her rhythmic call tempts hungry customers zipping by on scooters and walking into the central market. Some stop to buy a few of the palm-size doughnuts that she fried at dawn.

Every day, the city’s main square is filled with hundreds of traders who sell food items from sardines and mayonnaise to butter, milk, flour and biscuits. Thanks to their expired shelf life, most food items sell for cheap, starting at 1,000 Congolese francs (63 cents).

Masimango, who declined to give her first name because she has bought and used expired ingredients to make her doughnuts for the past eight months, says the expired flour she uses makes her business feasible.

Occasionally the product she buys is noticeably rotten, she says.

“Sometimes, as I open a bag, a few dark specks [of discolored flour] and an incredibly foul smell greet me,” she says of the expired product she often purchases. This bag of flour expired in 2016.

Despite the obvious expiration date, she says she decided to use it because she couldn’t afford to buy another bag.

In Kisangani, a region notorious for its remoteness and for the high cost of imported goods, expired products are seldom thrown away. Once food items and cosmetics pass their expiration dates, by months or even years, market vendors simply reduce the prices, which appeals to customers who prefer the lower prices. Though financially advantageous for some, health concerns are prevalent among some customers. They blame local authorities for the circulation and sale of expired goods in the city.

In the Kisangani region, expired products are seldom thrown away.

Tshopo province is one of 26 newly formed provinces in DRC, representing the southern portion of the former Orientale province. The economy of the former province, where Kisangani was a major city, was heavily reliant on agriculture and trade because of its remote location that relies on the Congo River for most of its goods and imports.

Food manufacturing was also common in the former province in the 1980s and 1990s. Foreign-owned factories produced food items such as sugar and margarine. But conflict between various armed factions here, however, caused many businesses to fold and drove factory owners to leave the country.

While crops such as rice, cassava, beans and maize are still locally harvested and sold in markets, processed and packaged foods are no longer manufactured here. Instead, residents rely on imports from Uganda, Kenya and China.

In 2015, the DRC imported $5.64 billion worth of commodities, with foodstuffs accounting for $427 million. The government’s Office Congolais de Contrôle (OCC) is responsible for trade standards and conformity assessments of the country’s exports and imports. Preventing the circulation of expired goods in Kisangani also falls under its jurisdiction.

The OCC prohibits the sale of all expired items so market vendors, department store owners and wholesalers are required to get rid of the products they sell when the products pass the manufacturer’s expiration date indicated on the packaging.

But many business owners say throwing away their expired merchandise is not realistic. In fact, the cheaper prices draw more customers, making expired items their best sellers.

Gustave Nkulu, head of the export division of the OCC, cites anonymous tips as a primary way that they catch people selling expired goods. In February, an owner of a large department store in the central business district was caught changing expiration dates on bags of wheat flour that had expired in 2014. The vice governor of Tshopo province, Léon Deon Basangu, says they were tipped off by an anonymous source before they arrested the owner.

But for vendors who are not caught, the popular trade continues.

Masimango, a widowed mother of seven, makes less than 80,000 francs ($50) from her weekly sales. She uses about 20 percent of her income at the market each week to buy the ingredients used to make her doughnuts: sugar, eggs, powdered milk and a 25-kilogram (55-pound) bag of flour, which is usually expired.

Masimango says that she has enough money left over after shopping to take care of her children because she relies on cheap, expired goods to run her business.

But sometimes expired flour makes the doughnuts taste salty and rancid, and the dough loses its elasticity, she says. Masimango also says some customers complain of the unusual taste but because the snack is affordable, sales are steady.

For Muyangi, whose first name has been withheld because he fears arrest by the OCC for selling expired tins of sardines in the market square, expired goods are a key element of making a living as a vendor here.

Many business owners say throwing away their expired merchandise is not realistic.

Despite the popularity and affordability of expired goods, Bienvenu Bolonge, a doctor at Papa Bwande hospital, says consumers must guard against regular consumption of expired food items. He says the longer expired goods remain on the shelf, the more the quality reduces and they become susceptible to natural processes of decay.

“Women who come here usually complain of itchy skin as a result of use of some expired cosmetics,” she says.

Despite the popularity of expired products, there is still a market for buying and selling fresh products.

“I can in no way buy such [expired] products, even if, as luck would have it, they sell for as low as 10 francs (1 cent),” says Jeannine Wembo, a mother of four. “I can’t run the risk of killing myself or my family.”

Some shop owners and market vendors say they do not sell expired products, however lucrative. For Luc Kandolo, owner of a small convenience store, this means that he does not make as many sales as vendors who sell expired goods.

“We’re in way over our head with the situation,” Kandolo says of the circulation and sales of expired goods. “True, some products available on the market have yet to go past their expiration date, but the OCC lets traders bring them into the province, knowing full well that their expiration date is approaching.”

Kandolo says he has witnessed some shop owners pay OCC officials to allow them to bring already expired goods into the province.

Nkulu of the OCC says the claims of corruption are unsubstantiated.

“We are inspecting products sold by market vendors and in stores to identify those that are expired,” he says.