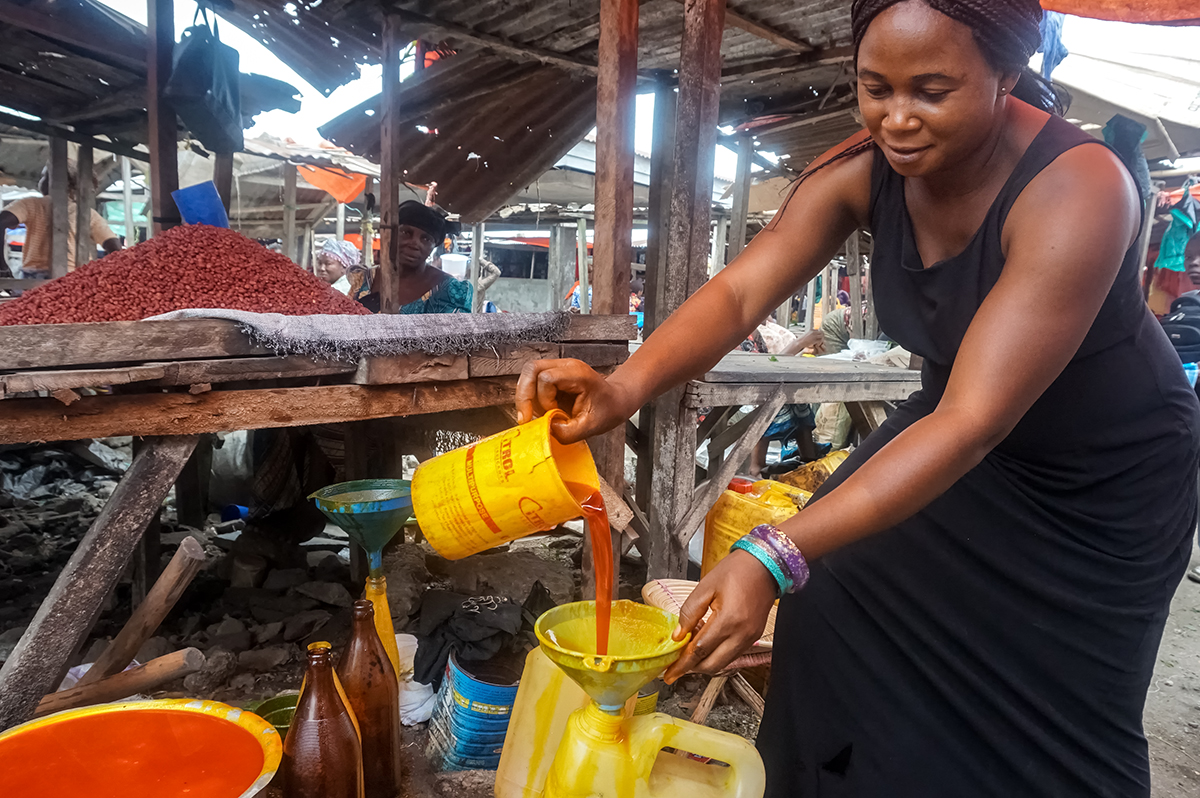 KISANGANI, DEMOCRATIC REPUBLIC OF THE CONGO — Sophie Akambo prepares pondu, a local dish, four times a week. The mother of five says the stew, made of cassava leaves, dried fish and palm oil, is a quick dinner that she used to make for her family more frequently than she does now.

Palm oil is key to the Congolese diet. But some families are struggling to access the staple ingredient, which is also found in bath soap and other personal-care products. Akambo is one of them.

Palm-oil prices are rising in markets across Kisangani, the capital of DRC’s northeastern Tshopo province and a major trading hub with a population of about 1 million. Akambo says she’s left with few options to feed her family.

The palm-oil sector in Kisangani is at a crossroads: Production is declining, but demand is high among home cooks and soap-makers, and locals say bottles of the oil are more expensive than they’ve been in years. For some, the effects are crippling.

Experts project that the global market for palm oil will exceed 85 million metric tons by 2024. In the next five years, more than 54 million acres of land in West and Central Africa could be converted into palm plantations to meet this demand.

According to the World Bank, more than 80 percent of DRC’s working population is employed in the agriculture sector. While some of the largest palm plantations in the country are owned by international companies, small-scale farmers are largely responsible for supplying the population with palm oil.

The palm fruit, or kernel, is a very productive crop. It’s inexpensive to grow, and yields are plentiful. Three quarters of DRC’s land is suitable for palm cultivation, according to Moabi DRC, an independent initiative that monitors natural-resource use in the Central African country. But agricultural productivity among some small-scale farmers is low due to years of conflict and lack of government support.

Palm-oil production in DRC fell from 224,000 metric tons in 1961 to 187,000 in 2011. Despite the decline, domestic demand is high. The Famine Early Warning Systems Network estimates that a Congolese family of five uses 100 grams of palm oil a day.

Kisangani produces approximately 3,500 drums of palm oil every three months, and each one contains 208 liters, says Nicola Assani, head of the provincial government’s agricultural division. Nearly 75 percent of the oil produced goes to local soap-makers, while 25 percent ends up in kitchens, says Pierre Balombo, an agronomist.

In West and Central Africa, more than 54 million acres of land could be converted into palm plantations in the next five years.

Alfred Yangele Loma, an economic analyst with the provincial government, says there are six large soap factories in the Tshopo province, all of which use palm oil in their products. Many small businesses also make soap.

“I make local soaps, called Tobobi, that require palm oil,” he says. Kasongo uses 450 liters of palm oil to make 120 sachets of soap every two weeks, and each sachet contains 12 bars of soap. The businessman says he sells one bar of soap for 350 francs (22 cents), and they go fast.

Kasongo points out that larger factories make up to 2,000 bars of soap a day.

Loma says the soap industry has contributed to palm-oil price hikes in Kisangani in recent years.

“It’s clear that a big percentage of palm oil will go to those factories, and the few remaining quantities will become automatically very expensive,” Loma explains.

In a 2016 report from Cellule d’Analyses des Indicateurs de Développement, a state agency that tracks economic trends and national development, the average price for a liter of palm oil in the country increased by 28 percent between September and October of that year. Many people were paying more than 1,000 francs (62 cents) for just one liter.

Julie Mbelo Asumani has been selling palm oil in Kisangani’s central market for the past 16 years. Today, Asumani sells the oil for more than she did when she started out. She says she was forced to raise prices because her local supplier was also charging more.

“In 2015, myself and another vendor noticed that the price was going higher and higher,” Asumani explains. “That is when we realized the soap manufacturers had already booked the stock.”

Maguy Lombeya says she is paying four times more than she paid a year ago for half a liter of palm oil. Like Akambo, she now has to spend 800 francs (50 cents). She says the new price has stopped her from cooking nutritious meals that her children love.

Even with her income, Angele Lisimo, a market vendor and mother of three, says she is unable to afford palm oil.

“Palm-oil prices have skyrocketed, and we’re paying the price for it as a result of our being obliged to use palm oil every day to prepare food,” Lisimo says.

Albert Mundeke still uses palm oil in his household, but he blames local soap-makers for the rising prices.

“Soap making is not a bad thing in itself, but people’s nutritional health should always come first,” Mundeke says. “However, when the largest proportion of palm-oil production is used for making soaps, our families get hurt, because we rely on palm oil to prepare most of our foods.”