KIRUMBA, DEMOCRATIC REPUBLIC OF CONGO — Kanyere Mukewa spreads a mat on the ground at an open-air market in Kirumba, a town in eastern Democratic Republic of Congo. She meticulously arranges the vegetables she sells — cabbage, mushrooms, pumpkin leaves and amaranths — in bundles, bunches and piles. It is something she has done for 17 years, but lately she has become increasingly worried that her business might fail because customers have stopped coming.

“My clientele has become smaller,” says Mukewa, who relies on the business to provide for her five children. “Now my produce is rotting.”

Her customers have stopped coming, not for lack of interest, but because Mukewa has more than doubled the prices of her vegetables, from 200 Congolese francs (10 cents) to 500 francs (25 cents). But she isn’t doing so because of greed. She just doesn’t have change to give to her customers, most who pay with large notes.

“My customers do not want to leave without change,” she says, “so I give them produce hoping that they will return to pay me when they get change elsewhere.”

A severe shortage of small-denomination Congolese francs has made it nearly impossible for traders in Kirumba and the wider Lubero territory where the town is located, to conduct daily business. Small-scale traders like Mukewa — who prefer cash because of the high transactional cost of mobile payment systems — have been hit especially hard.

Pascal Kakule Kisorobo, head of the economic department in Kirumba, says the shortage is affecting the whole country. He acknowledges the negative consequences for traders but says that the government is taking steps to resolve the issue.

“I have already submitted a report to the higher-ups, explaining the situation,” Kisorobo says.

But David Kamuha Musubaho, the finance adviser to the governor of North Kivu province, where Kirumba is located, doesn’t see the problem going away any time soon. The Central Bank of Congo hasn’t printed any new small-denomination notes in years because it doesn’t make economic sense, he says.

“The mint cannot inject a lot of funds to produce a currency that no longer has any value on the market,” Musubaho says.

A few years ago, small franc notes were more common. Local traders used them more often than larger ones. Gradually, the notes aged and ripped. It was common to see notes held together by clear adhesive tape. But eventually, they fell apart beyond repair and became unusable. 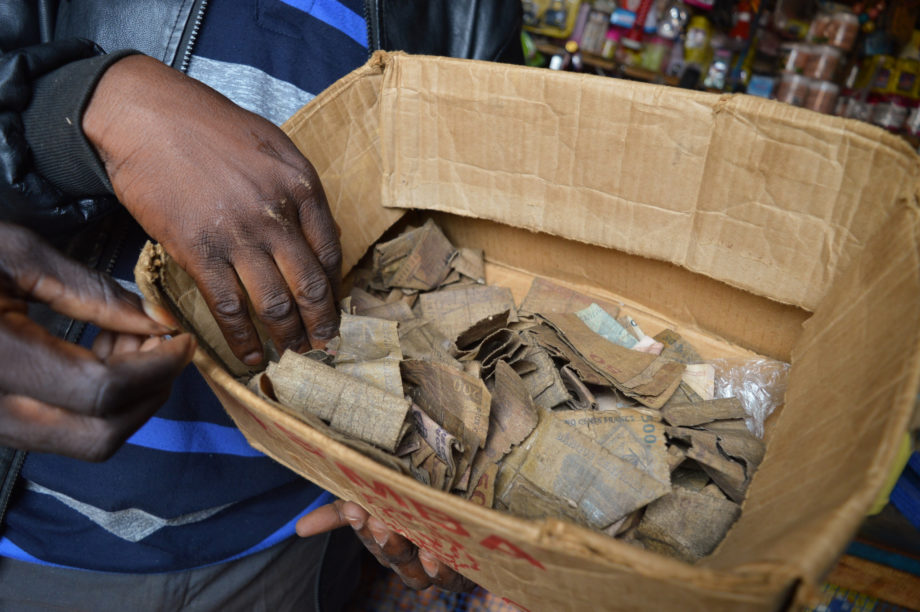 A shopkeeper displays worn out and unusable Congolese francs in Kirumba, Democratic Republic of Congo. The Central Bank of Congo has stopped printing small-denomination notes because it would cost more than they are worth.

Mobile payment systems like M-Pesa, Airtel Money, Tigo Cash and Orange Money could help solve the problem. Between 2007 and 2017, mobile money subscriptions in DRC grew an average of 20% annually, from 4.9 million to 29.3 million subscribers, according to a 2018 report by Élan RDC and FPM, internationally funded programs for the development of private-sector and financial inclusion in DRC. But studies have shown that the traders and consumers most affected by the shortage of notes don’t typically use electronic payments. A report by Mastercard Foundation and the International Finance Corporation found that in 2017, only about 16% of adults in the country used mobile money. Digital financial services in DRC are also more common among young people and students, who can easily adapt to mobile phone “grammar,” according to the study.

Some sellers are now coming up with other creative solutions. Katungu Makasi, who sells salted dried fish and leeks at an open-air market, says she has become friendly with a woman who sells tomatoes nearby. The two of them agreed to encourage customers to buy the other’s product instead of taking change.

“When I am missing 100 or 200 [francs] to give back to someone who buys a fish, for example, I tell the customer to buy tomatoes worth the same amount from the seller and I give her the money later, as we have agreed,” Makasi says.

"The mint cannot inject a lot of funds to produce a currency that no longer has any value on the market." David Kamuha Musubahofinance adviser to the governor of North Kivu province

Others, like Gisi Kahindo Saambili, who sells cassava flour, a regional staple, say they have had to adjust the quantity of what they sell to fit exactly 500 francs.

“The regular measuring unit used to cost 600 [francs], but customers say they can’t find a [100-franc] bill,” Saambili says. “So we reduced the quantity of flour and the price to 500 [francs] to avoid losses.”

But these innovations don’t always solve the problem. Many of the customers Mukewa extended credit to never returned to pay her.

“That has reduced my capital significantly,” she says.

She has incurred losses of more than 10,000 francs, about $5 — a significant amount, considering that the price of a bunch of vegetables, for example, is 200 francs. She has reduced the number of days she goes to the market so that she can work as a farm laborer to support her children.