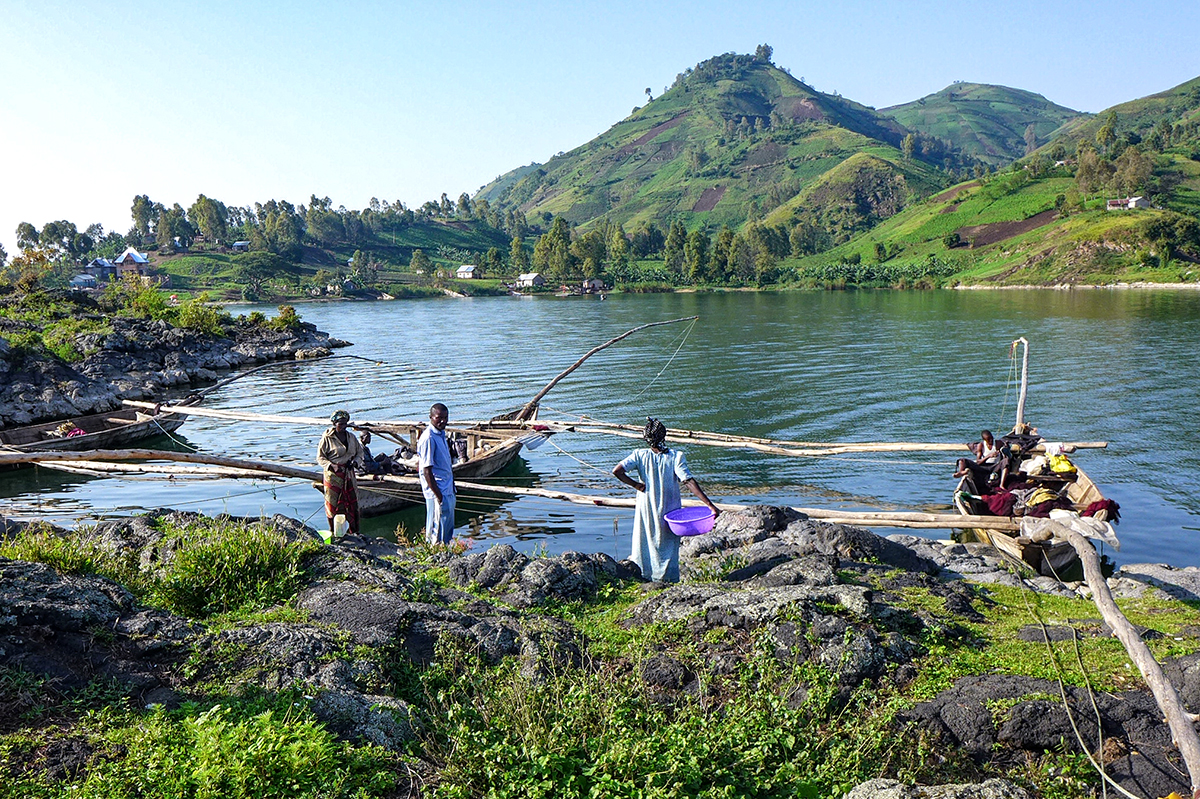 GOMA, DEMOCRATIC REPUBLIC OF CONGO — The stale taste of once-frozen fish is hard to get used to.

For Furaha Bahizirhe, 28, a fish merchant at Kahembe market in Goma, the capital of DRC’s North Kivu Province, sales are low. Customers say the imported fish she now sells pale in comparison to the flaky, buttery tilapia of Lake Edward that were once abundant in the market.

“The fish I’m cooking on the grill here come from outside the country,” she says of today’s market offerings. “Our local fish are of good quality, but they have become a scarce commodity and price-prohibitive.”

Fish imported from other African nations and even Europe are both affordable and accessible here, but locals have a hard time adapting to the tastes.

“Most of the fish we sell in Goma are imported, and we have trouble making customers fall in love with our business,” Bahizirhe says.

Lake Edward lies between DRC and Uganda. There are complicated reasons for the waning numbers of its tasty and once-abundant tilapia. Decades of violence in DRC’s Virunga National Park are the primary cause. Armed groups control some fisheries, and ongoing fighting makes it difficult and dangerous for fishers to work regularly, resulting in declining fresh catches for local markets. But a decades-long drop in the hippo population has also contributed to the dip in the numbers of fish in the lakes. 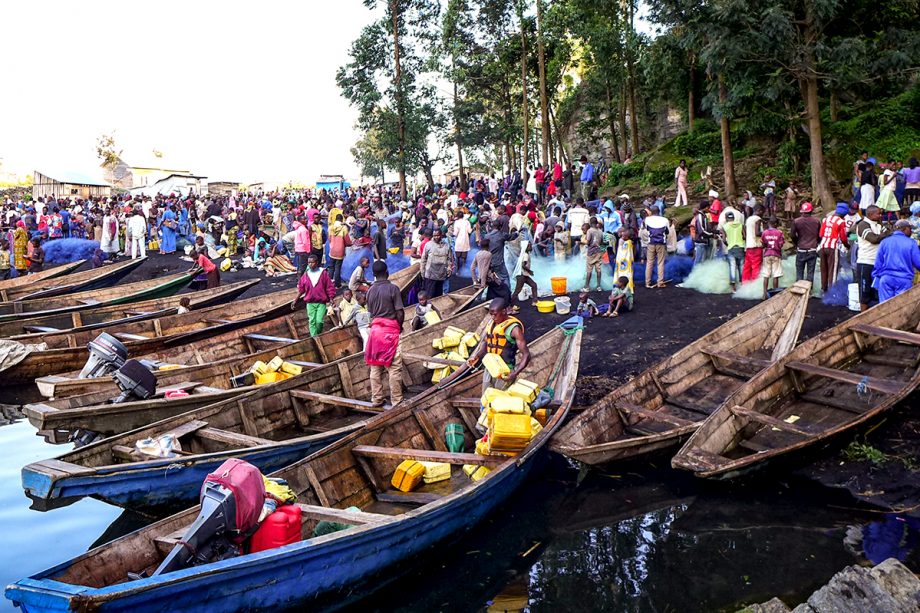 Fishers gather on the banks of the lake. Violence and activity by armed groups threaten fishers’ safety and have affected the region’s fish supply.

John Kubota, fisheries adviser to the Ministère de l’Agriculture, Pêche et Elevage, which manages fisheries in the area, says that as violence among armed groups has increased, fish stocks have significantly declined, especially in Lake Edward, where there has been a surge in insecurity in Virunga National Park.

Kubota says Lake Edward once had a production capacity of between 15,000 and 20,000 metric tons of tilapia annually. An estimated 700 canoes were used to fish on the lake daily.

Lake Edward alone could once sustain fish demand for all of eastern DRC, he says.

But circumstances in the region make that impossible now.

Since 1994, when the genocide in Rwanda forced more than a million people to flee that country and settle around Virunga National Park, poaching and violence have been constant. The park is home to critically endangered mountain gorillas, as well as elephants, antelopes, warthogs, giraffes and okapis.

In the 1970s, there were as many as 30,000 hippos in and around Lake Edward, according to L’Institut Congolais Pour la Conservation de la Nature (ICCN), an entity of the government’s National Parks Authority that has a mandate to enforce conversation within DRC. During the country’s 10-year civil war, which raged in and around Virunga, hippos were particularly hard-hit.

According to Virunga National Park, which is run by a public-private partnership between the ICCN and the Virunga Foundation, a U.K.-based charity, armed groups used to sell hippo meat to fund themselves during the war.

The fish I’m cooking on the grill here come from outside the country. Our local fish are of good quality, but they have become a scarce commodity and price-prohibitive.Furaha Bahizirhe, a fish merchant at Kahembe market in Goma

There were once 10,000 hippos in Ishango, a village on an inlet of Lake Edward, where the Semliki River meets the lake. According to the ICCN, that number has fallen to as low as 14.

While conservation efforts for the hippo and other wildlife in the park are ongoing, the loss of so many hippos has had an impact on fish stocks, Kubota says.

“A single hippo can produce as much as 25 kilograms [55 pounds] of dung per day,” he says. “That is, one hippo alone can help feed thousands of tilapia a day. Yet poaching is threatening hippos’ survival.”

“The hippo is one of Africa’s iconic species, one that is becoming increasingly threatened by hunting and other factors,” Kujirakwinja writes in the study.

“Our findings that hippos are on the increase are encouraging and evidence that efforts to protect hippos and other species are working,” Kujirakwinja concludes in the study.

In order to keep those numbers on the right track, armed groups’ activity in the park needs to stop, Kubota says.

Armed groups now control some fisheries, he says, while robbers and illegal fishers also contribute to limiting the stock.

“The pressure put on the lake results in the declining fish-catch volume,” he says. 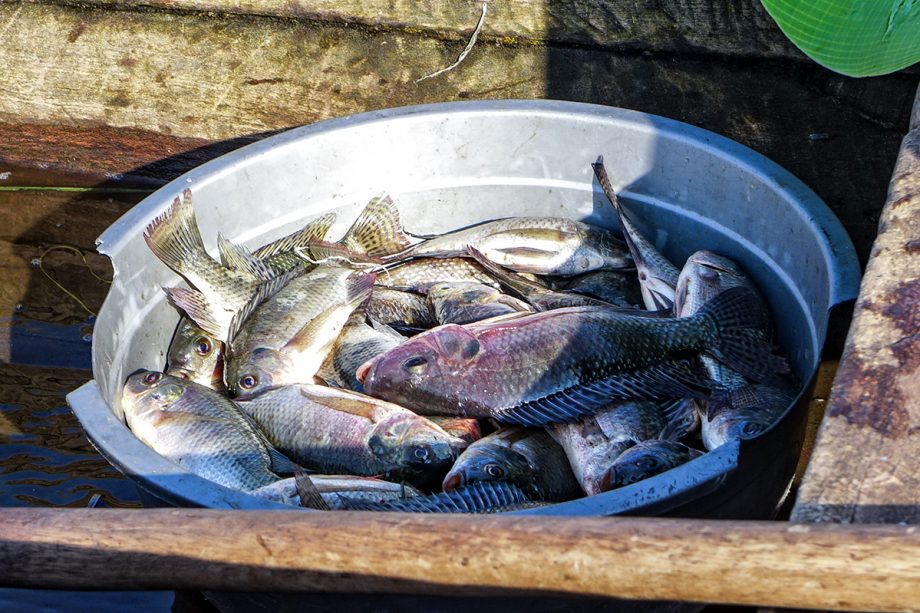 A fisherman’s daily catch from Lake Kivu will go directly to the local market.

For local fishers, the threat of violence is ongoing.

“The government knows full well we’re always attacked while fishing on the lake,” says Ladoux Simwera, 50, who has been working there since 1999 and is now the president of the Masisi Fishermen’s Platform, an informal organization of local fishers.

He says it’s common for armed groups to steal nets and attack fishers.

“We depend on fishing for our survival and rely on it to send our kids to school,” he says. “Stealing my fishing net is no different from crippling my life, because I can’t afford another one unless I toil away for years. Several children in [the village of] Nzulo have been orphaned, because their parents either drowned or were shot dead by robbers who operate under cover of darkness.”

While increased resources are going to conservation efforts in the area, Simwera says, more needs to be done to protect the fishers who can get DRC’s favorite fish back to the markets.

“The shortage of military and law-enforcement officers poses a big threat to our security,” he says.

Kubota says both the provincial and national governments are working to find ways to end the fish shortage and protect both fishers and wildlife.

“Several projects have been embarked on at the national level,” he says, adding that two projects to replenish fisheries at Lake Edward are underway. “More projects are expected to be implemented to ensure increased fish production by 2020.”