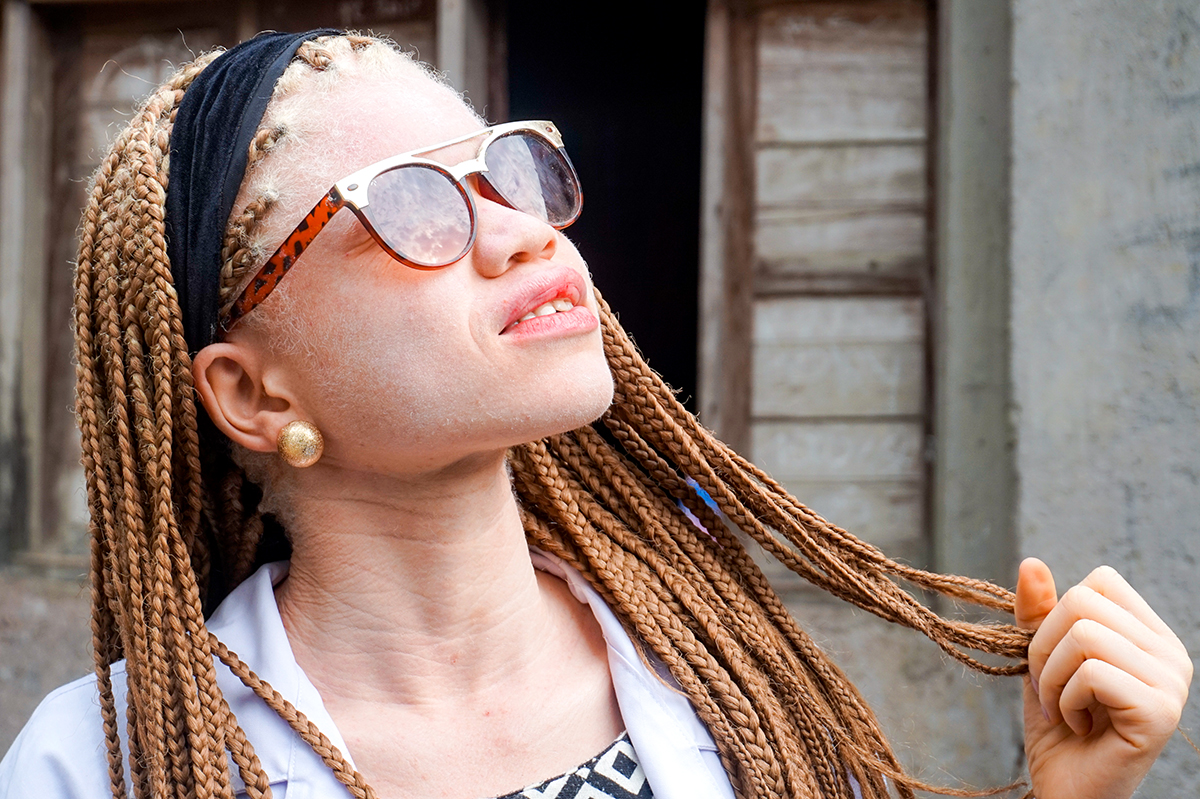 KISANGANI, DEMOCRATIC REPUBLIC OF CONGO — Véronique Lemba, 25, is doing rounds at the local hospital –­ a first for a person with albinism in Kisangani.

One of nine children, Lemba says she worked hard to overcome many obstacles.

“I was born albino, which means that I saw myself differently from my siblings and parents. But I always felt love from all of them,” she says. “In elementary school, I always earned good grades, and was at the top of my class. As a result, I earned people’s respect.”

But book smarts only got her so far.

“Integrating with kids in school was also an issue that wasn’t easy for me because I was shunned by some of my classmates,” she says. “But my deep desire was to change people’s perceptions of my condition, which is simply caused by defective production of melanin.”

Lemba, like other people with albinism, lacks pigment in her skin, which means she is prone to sunburns that can quickly transform into third-degree burns.

“Here in Kisangani temperatures are always high, which doesn’t make things any easier for me because my skin burns in the sun,” she says, adding that her inability to play outside added to her isolation as a child.

But today she’s working to undo discrimination at the next level: Lemba is poised to become the first medical doctor with albinism in the city of Kisangani, supervisors in the hospital confirm.

Throughout East Africa, people with albinism are discriminated against, abandoned and even hunted for their body parts. In Kisangani, DRC’s third-largest urbanized city, Lemba says conditions are similar. 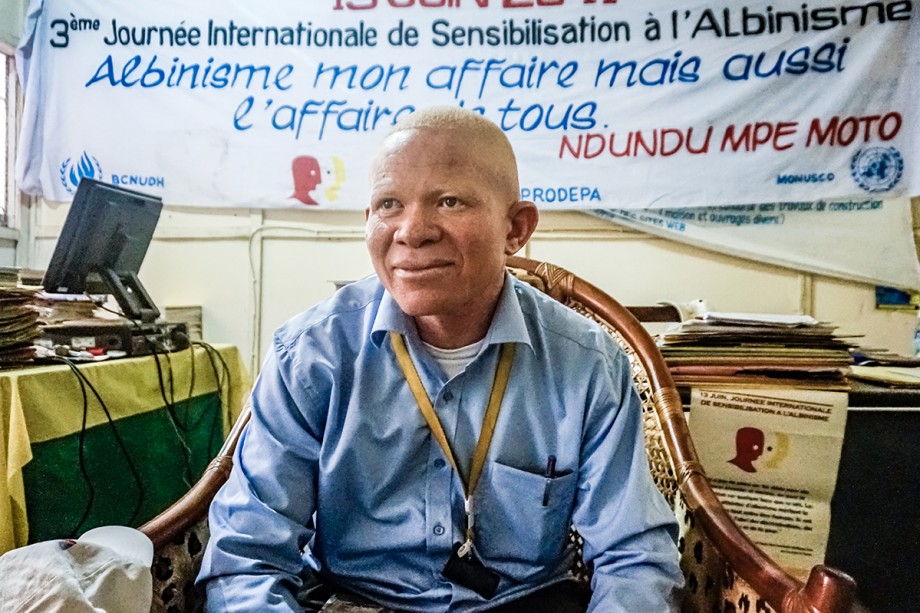 Servain Ndumba, president of a local association that advocates for the rights of people with albinism, says Veronique Lemba will be the first-ever doctor with albinism in Kisangani.

Historically, people with albinism in Kisangani have struggled even for basic education, says Servain Ndumba , the president  of the Association pour la Protection et le Développement de la Personne Albinos à Kisangani. He says Lemba becoming the first local doctor with albinism is going to set a great example for others.

“She’s setting them on a path towards plucking up the courage to be useful to society in all aspects of life,” he says. “She’s strong and always concerned about the health of her fellow members of the association. Talking quite frankly, we all love her.”

There are more than two hundred members of the local association, but just 48 have attended school, Ndumba says.

Lemba, who is also a member of the association, says education has to be a top priority for the albinism community.

“Soon, I’ll become a medical doctor,” she says. “I’m making my best effort to change the situation of people like me. I hold out hope that one day my community will understand that a child born with albinism is not a curse.” 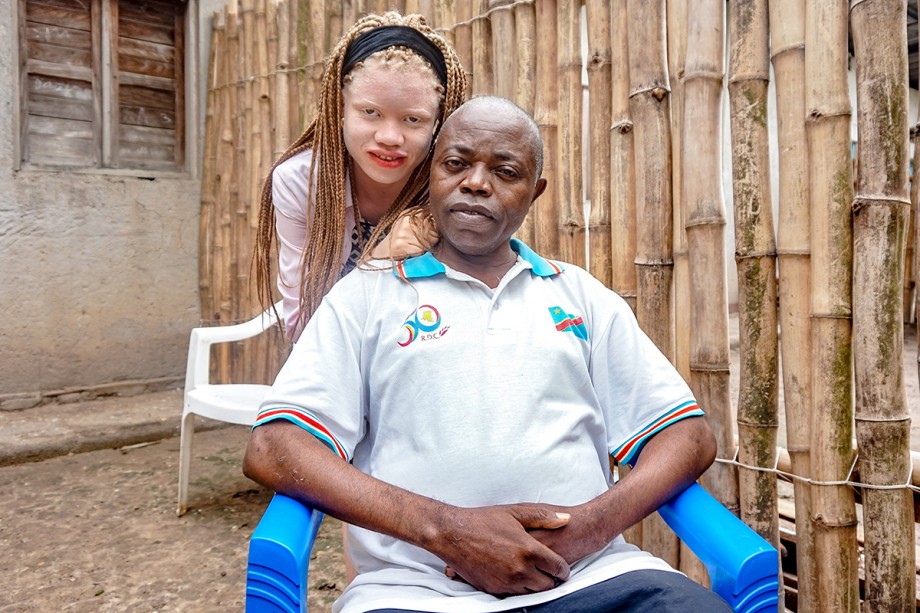 Véronique Lemba poses with her father, François Lemba, who says he recognized from an early age that his daughter was exceptional. She was born with albinism, a condition that prevents the proper production of pigment in the skin.

Vincent Melangana, a medical doctor working at Hôpital Général de Référence Makiso, who is Lemba’s supervisor, says she performs her duties well. He says she occasionally faces discrimination while treating patients who are reluctant to be treated by a person with albinism, but perseveres and makes all of her patients feel safe and comfortable.

“She treats patients with loving care,” he says. “Seeing people who need medical care is never tiring to her. Honestly, she’s a hardworking resident.”

François Lemba, her father, says he’s proud of his daughter because she has proved that albinism is not a disability.

“My daughter is unique in every way,” he says proudly. “To me, what she does is quite a feat, thus leading me to rejoice at the fact that I’m so blessed with such a wonderful child.”

Today, he says, he is proud to see his daughter becoming well-known throughout Kisangani. He hopes to be an inspiration to other parents who may still be struggling to accept their children born with albinism.

Parents like Charlie, who asked that her last name not be used for fear of increasing stigma against her family, face myriad hardships at home.

“Since I gave birth to two albino children, things haven’t gone well in my marriage,” she says. “I have seven children, and two of them were born with albinism. Their albinism has made my husband apathetic towards them.”

Véronique Lemba says she hopes her path will decrease stigma in the community. She is on track to complete her residency within the next 24 months.

“I’ll become a medical doctor and finally be able to fight for the improvement of the health of [people with albinism],” she says.

As she finds success in her career, she says she has plans to help other kids in her community.

“I look forward to being able to set up a mechanism that will facilitate all albinos’ access to sunscreen lotion,” she says.