Skip to main content
The story you are reading was published on Tuesday November 22, 2016. To read more recent stories click here. 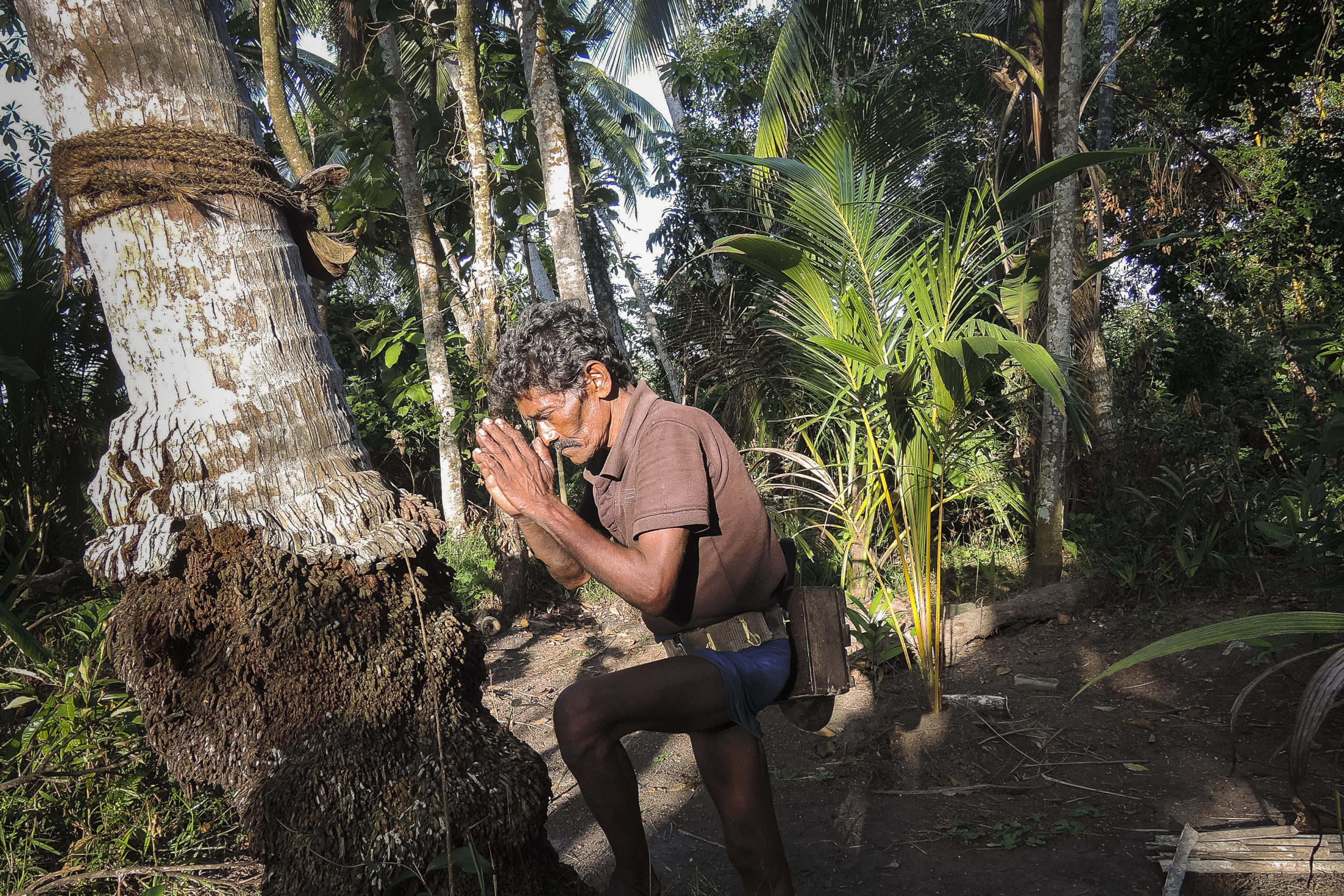 WADDUWA, SRI LANKA — Before he climbs a coconut tree, Sumithra A. Sunil Upali, 58, honors the tools of his trade: a heavy mallet made from the pith of a tamarind tree and a sharp, curved knife that he tucks into a basket that is strapped around his thin waist.

He also worships the coconut tree, clasping both hands together in prayer just before he pulls himself up its trunk. The prayer is for safety for what’s about to happen—“a perilous journey in the sky,” he says. 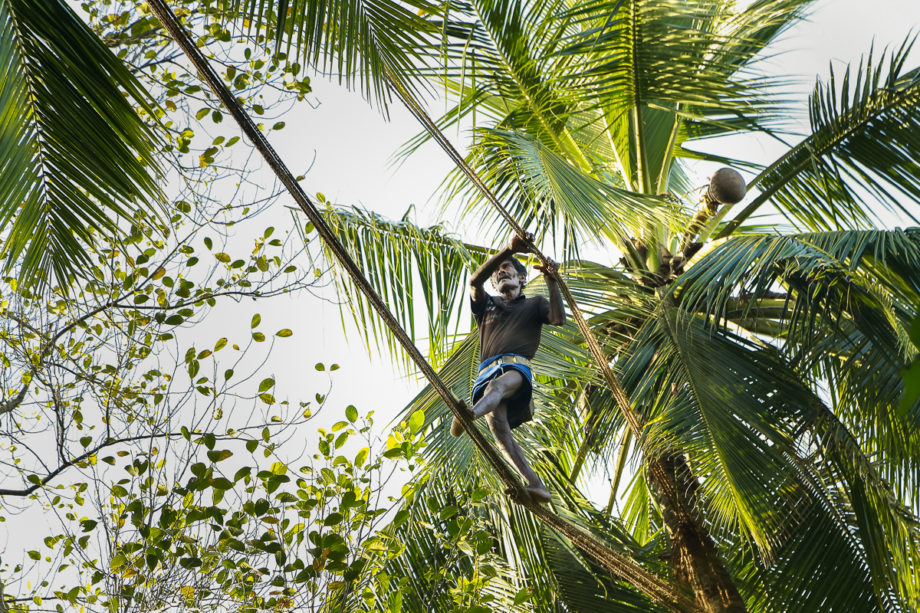 Sumithra A. Sunil Upali walks on a tightrope between the coconut trees.

Upali is wiry. His face shows grit, determination. His job takes him 50 feet into the air, to the tips of the willowy coconut trees that dot his compound. A tightrope connects the trees, and Upali briskly moves across it, agile as a circus performer, nearly skipping between the trees. When he finds coconut flower stalks, he steadies himself between the tree’s fronds and slices the stalks open. Sap, known as toddy, oozes from the incisions and drips into clay pots.

He does all of this in the late evening.

At dawn, he scales the trees again and lowers the pots to his helper, who stands at ground level. The helper pours out the toddy and sends the pot back up.

The job is dangerous. The ropes are slippery and decay quickly. The wind sends them swinging. Wasps swarm at the treetops, and Upali sets a piece of paper ablaze to chase them away.

His own father died this way, when he fell from the top of a coconut tree. He was 65 years old.

“I have no other livelihood,” Upali says, “so in spite of the risk, I keep going.” 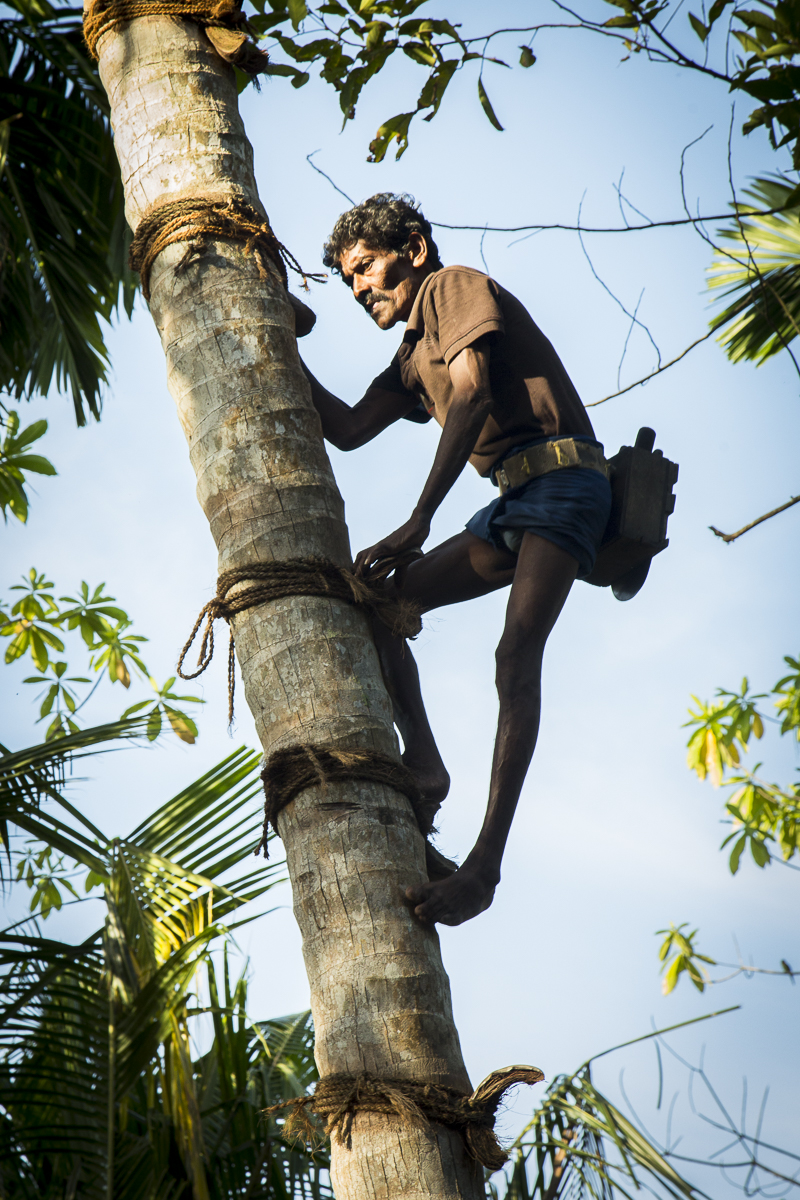 Toddy tappers spend hours at the top of coconut trees. It’s a dangerous profession. Strong rain and wind can cause the tappers to fall.

Fresh toddy ferments quickly. Within just a few hours, it becomes an alcoholic drink and as soon as 12 hours after collection it ferments into a vinegar that is used for pickles, chutneys and meats. Cooked, it becomes treacle, a sweet, molasses-type syrup that is used around Sinhala New Year to make sweetmeats and jaggery.

Sri Lanka’s coconut trees have for millennia been tapped for these uses, mostly by people who are from lower castes. But fewer people are doing the work now because it’s so dangerous. At the same time, a shortage of coconut trees and a demand for their products have led to adulterated toddy that is, in some cases, dangerous to consume. Even so, that adulteration—and the resulting increase in toddy, treacle and other products, even when low-quality—has pushed some willing toddy tappers out of the industry.  Low pay and increasing licensing fees at toddy bottling plants are driving others away from the job their forefathers did. Exact numbers aren’t available, but people in communities where toddy tapping has been practiced say few people do it now.

Fonseka owns about 100 trees, and leases trees as well. But finding trees isn’t as easy as it once was, he says. Land is being cleared for housing, and the trees that are abandoned by one-time toddy tappers take two or three years until they begin propagating again. 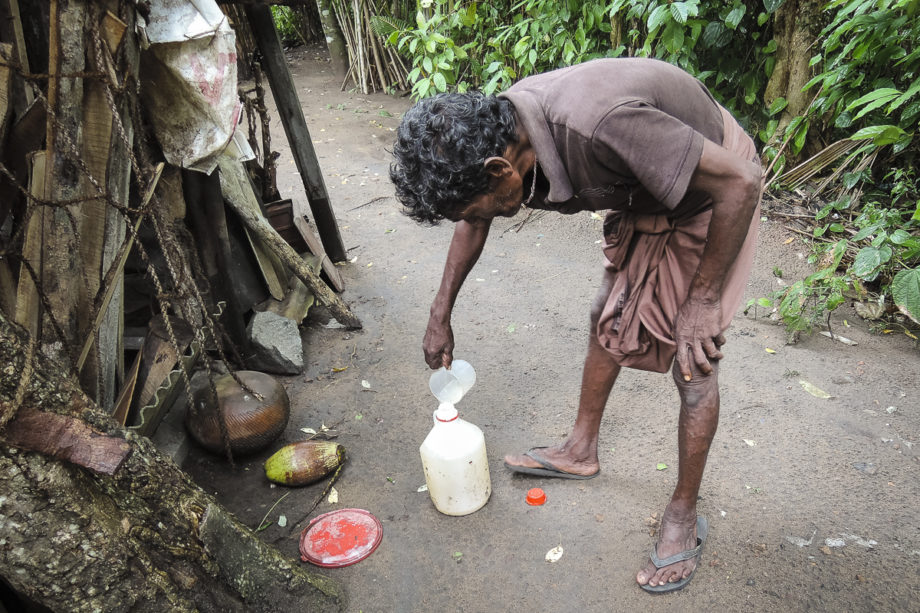 Sumithra A. Sunil Upali pours fermented toddy into a bucket.

Upali has been a toddy tapper since he was 16 years old.

Upali’s wife died of cancer in 2002. Their son, Sandun, is now 23 years old, but he refuses to become a toddy tapper.

“He abhors this trade,” Upali says.

The family is part of the Durawe caste, which is considered a lower caste in Sri Lanka. Sandun Upali says his father is addicted to toddy.

Upali doesn’t deny his fondness for the drink.

“I need two cups of toddy a day, fresh from the tree,” he says.

Upali owns the five trees he taps, but they’re leased to a businessman who pays Upali 2,500 rupees ($17.25) every year for each tree. Sri Lankan law requires that a person own at least 50 trees to obtain a license to sell toddy. Upali says he collects about two and a half gallons of toddy each day.

Upali plans to keep tapping his coconut trees as long as he has the strength.