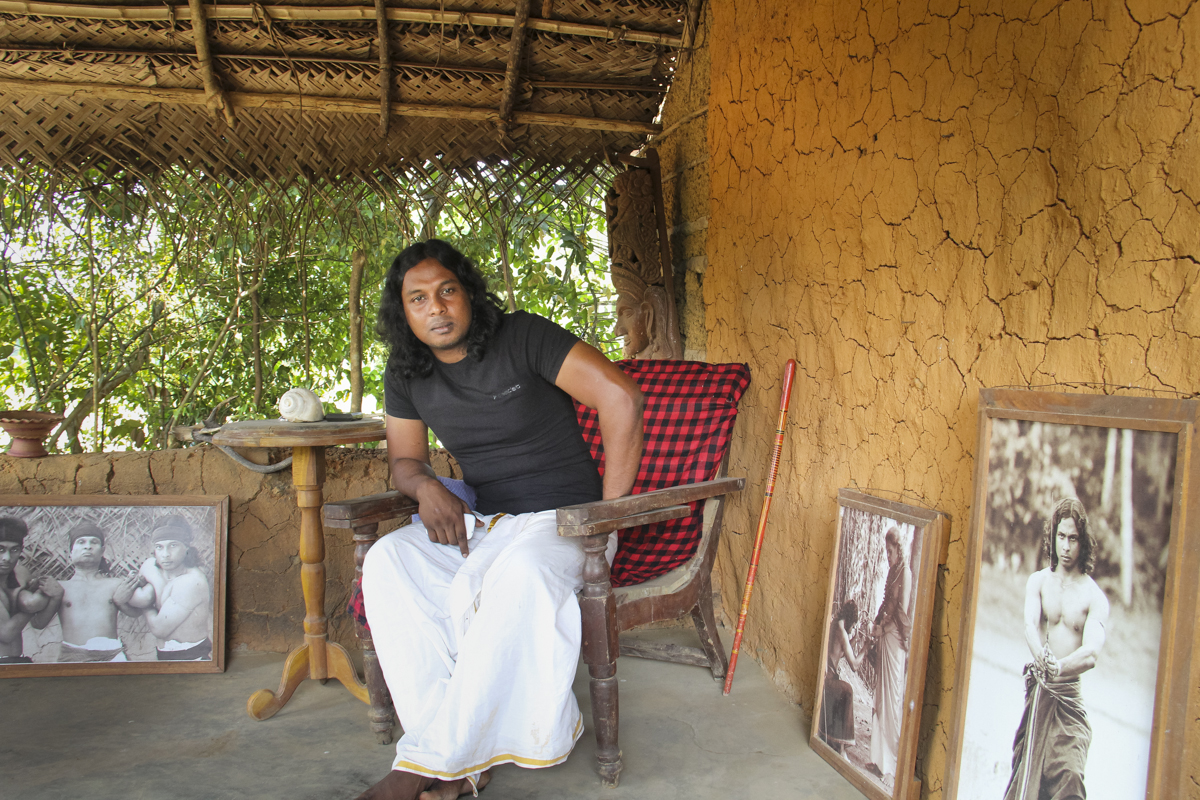 At a command from the master, the students drop to the floor and perform a set of movements in worship of the sun.

At another command, two students step forward for a practice fight. They take position, their eyes locked. In an instant, one leaps into the air and throws a blow at his opponent, who ducks, turns around and tackles his attacker.

An ancient form of fighting taught to warriors, angampora is filled with acrobatic moves that are as graceful as they are deadly, says the school’s founder and master, Mahanthaarachchige Ajantha Perera. It is mainly hand-to-hand combat, though it sometimes incorporates special hand-held weapons.

Angampora is said to date back hundreds of years, to a time when kings reigned in the country, Perera says. Traditionally, the art is passed from father to son, or to a close, trusted male relative.

Perera, who began his training at age 6, qualified for the title of “gurunnanse,” or revered master, 10 years ago. Soon after, he decided to set up his school.

His family strongly opposed the founding of the school, believing that the secrets of angampora should remain within the families that had been entrusted with them for generations. Perera took a contrary stance.

“This art form does not belong only to our family,” he says. “The knowledge should belong to the whole country. Hence, I decided to teach this art outside of the family.”

“The exact origins of angampora have not been traced,” Dalupotha says.

Many of the ancient records, written on palm leaves, have been lost, he says. What is known is that the king’s warriors used the fighting style in ancient times. It was mostly taught to men and occasionally to women, except for the deadliest secrets.

The effectiveness of angampora was best illustrated during Sri Lanka’s colonial period, Dalupotha says. Records kept by Portuguese, Dutch and British colonists describe sudden attacks by small groups of unarmed men, which often killed colonial soldiers or caused ailments and joint injuries that led to death within days. This martial art is still shrouded in secrecy and has not been well-researched.

In 1818, the British rulers issued an official notice banning the practice and teaching of angampora, Perera says. Some families were banished to Mauritius, an island nation in the Indian Ocean. Others went underground, teaching the fighting style to only a few trusted sons.

In recent years, Sri Lankan films and TV shows have spawned a resurgence of interest in angampora, Perera says. He is taking the opportunity to both preserve the martial art and expand its student base.

Dilan Maibula, 26, a senior student at the training school, credits Perera with reviving the angampora tradition in Sri Lanka.

Although distantly related to Perera, Maibula was excluded from learning the martial art until Perera opened his school and began to teach students outside traditional angampora families, he says.

“My ancestors may have practiced angampora, but my father did not learn it,” Maibula says. “I wanted to learn it and have been training and practicing for nearly 10 years.”

But despite requests for large group trainings as interest in the martial art has risen and Perera’s initiative to extend the opportunity to new families, he is determined to preserve the traditions and rituals surrounding the selection of students.

According to ancient texts, all angampora students must possess special attributes in their horoscopes and physiques, Perera says. The horoscope reveals the student’s life span, trustworthiness, and any associations with the art in past lives. A student also must be free of deformities and must possess certain physical attributes, including a forehead and palms of specific widths. The time when the student approaches Perera to request training should also be auspicious according to astrology.

A student selected for training goes through a trial period before learning the more difficult techniques, Perera says. He teaches angampora techniques that can kill an opponent only to family members or other highly trusted students.

“The angampora tradition focuses both on physical and spiritual development of an individual, including training in meditation,” Perera says. “Once you start training, you have to follow a certain lifestyle.”

The revival of angampora is contributing to the shaping of Sinhalese identity and culture today, Dalupotha says.

“This gave a chance for Sinhala Buddhists to reconnect with their history and find heroism within their culture,” he says.

In an era of globalization, Perera’s contribution in researching, recording and sharing this traditional knowledge deserves praise, Dalupotha says.

“Perera has given a social value to the art form,” he says. “Because of people like him, today there is a great value bestowed on angampora and the artists who perform it.”