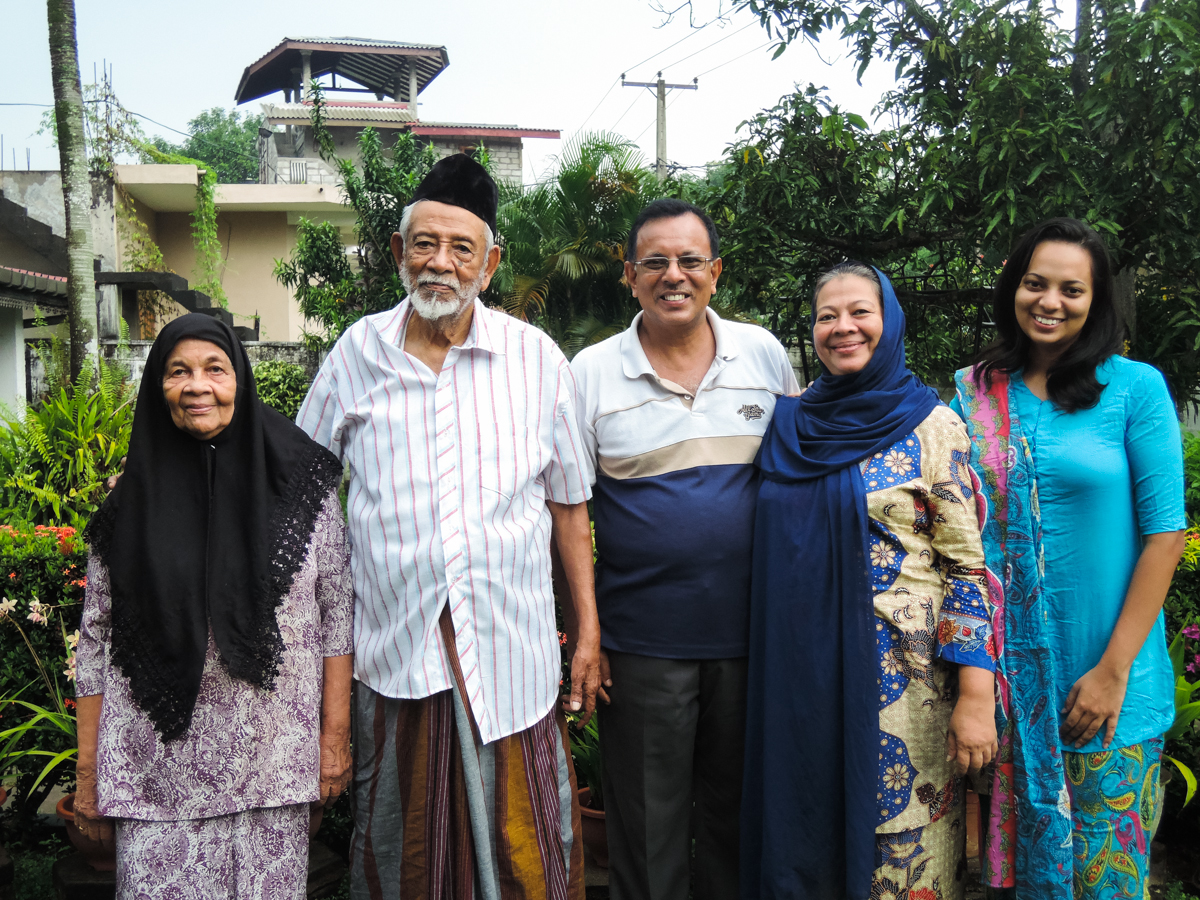 “All my friends talk to me in Sinhala and English so it doesn’t matter,” he says. Sinhala is one of the two national languages in Sri Lanka. The other is Tamil.

The association has 146 members from around Sri Lanka, but only around 10 young people attend the quarterly meetings, Marso says. He joined the association on his father’s request, but now he enjoys hanging out with other Malay young people, he says.

Both his parents are Malay and speak the Malay language to each other, Marso says. But they didn’t encourage him or his sister to learn and, he says, they don’t seem to mind that their children never picked up the language.

“I wish I could find time to learn,” Marso says. “I really need to.”

Marso is not alone. Increasingly, young Malays in Sri Lanka do not learn the language of their heritage. That’s primarily because this form of Malay is only spoken by Malays in Sri Lanka: The Malay language spoken in Malaysia and other parts of Asia is different. Knowledge of Sri Lanka’s Malay isn’t useful for getting a job or pursuing higher education.

During my childhood, my parents encouraged us to study in English in school but was strict in the usage of the mother tongue at home. I have instilled the same in my family.Tuan Mubarak Pakeerally, 85, a fluent Sri Lankan Malay speaker

Some young Malays are using social media in attempts to make the language relevant, but the community’s elders are concerned that a loss of the Malay language will lead to a loss of Malay culture.

Malays make up just 0.2 percent of Sri Lanka’s population, or 44,130 people, according to 2012 data from the Sri Lanka Census of Population and Housing.

The tiny community shouldn’t focus on its individuality  or preservation of the past, says Sakina Moinudeen, 28, who has a mixed parentage of Malay and Sri Lanka Moor ancestries.

Moinudeen says she doesn’t know Malay or Tamil, her parents’ native languages. Her extended family is diverse, she says.

“When we have gatherings either way, I totally depend on my hands and feet!” she says.

Moinudeen, a researcher with an advocacy organisation based in Colombo, says she doesn’t think she is missing out on anything important.

“I don’t find the language important,” she says. “The common bind between Moors and Malays is the religion – Islam.” 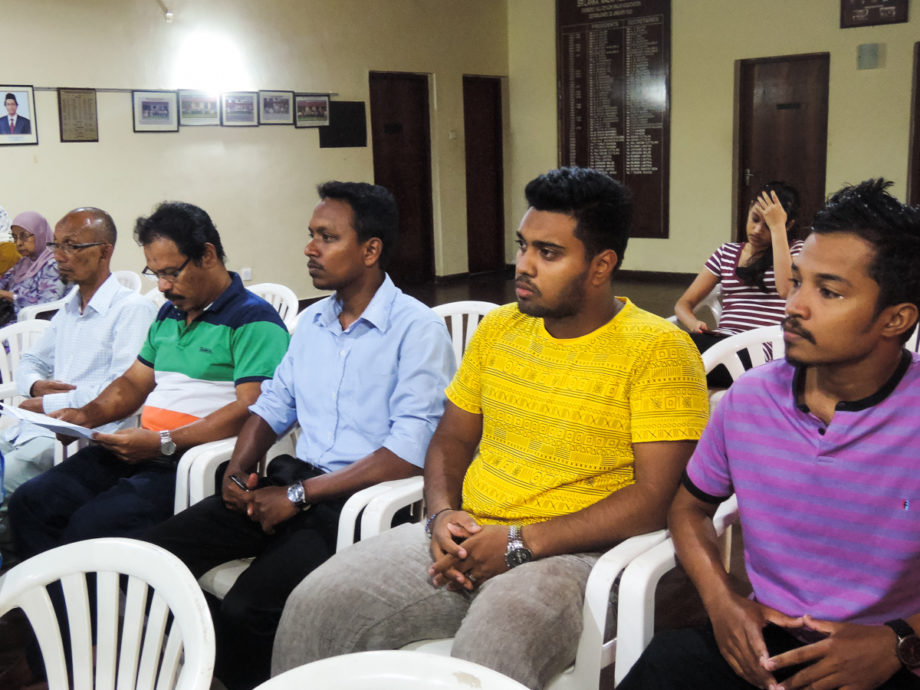 To many young people, the Malay language “has no commercial value,” says Tuan M. Fangeran Ismail, 60.

Ismail, a respected elder in the Malay community, speaks fluent Malay, but many of his Malay peers do not. So even meetings of the Sri Lanka Malay Association are conducted in English, a secondary language in Sri Lanka.

“We have tried conducting meetings in the Malay language but lack words to express ourselves,” he says. “This is due to the degeneration of the language down the line.”

His father-in-law, Tuan Mubarak Pakeerally, 85, has for years advocated the preservation of Malay culture in Sri Lanka.

“Malay traditional songs, poems and dances should be preserved for our generations to come,” Pakeerally says.  “We have a rich literature but due to the usage of other languages, our own language is on the wane.”

Pakeerally says he tries to encourage his children and grandchildren to be fluent in Malay, in the same way he was encouraged to speak the language.

“During my childhood, my parents encouraged us to study in English in school but was strict in the usage of the mother tongue at home,” he says. “I have instilled the same in my family.”

Mona Zahara Ismail, 28, Ismail’s daughter and Pakeerally’s granddaughter, does speaks the language. But it’s rare, she says, to find another young person with whom she can converse in it.

She’s been an active member of the Sri Lanka Malay Youth Association since it was formed in 2011, and serves as its deputy president.

“For me, my identity is important,” Mona Zahara Ismail says.

Small communities have threats and challenges. Living in a multi-ethnic society, it’s common that words from other languages get instilled.Romola Rassool, acting head of the Department of English at the University of Kelaniya

Shifts in how a language is used are natural, says Romola Rassool, acting head of the Department of English at the University of Kelaniya. But she agrees that language is a vital link to identity.

“Small communities have threats and challenges,” she says. “Living in a multi-ethnic society, it’s common that words from other languages get instilled.”

But, she adds, Sri Lanka’s Malay people needn’t worry that they will lose their language.

“It is a language in its own right and the word endangered is just a trend,” she says.

Even so, efforts to integrate even standard Malay, the language spoken elsewhere in Asia that is related to Sri Lanka’s Malay, have had dismal results.

In 1993, the Sri Lankan government introduced standard Malay as a subject in certain school exams, says B.D.K. Saldin, a language instructor who developed the examination papers for this exam.

But there was a lack of students who were prepared to sit for exams in that subject. It was removed from one lower-grade exam. It is still available in the Grade 12 exam.

Saldin says that during his 16 years as a private Malay language teacher, he had only 15 adult students sit for the test, which is used both as an educational qualification and the university entrance exam.

“We have no teachers to teach standard Malay language that is spoken worldwide,” Saldin says.

Technology could help change that.

Social media has become a place for young Malays to share jokes, memes and quizzes in Malay, says Mona Zahara Ismail. Some young Malays who lack confidence to speak the language in public, chat in Malay on WhatsApp and other media with friends, she says.

She hopes that social media will become a tool to help preserve the Malay language.

“Young Malays won’t feel it a burden but will learn in fun,” she says. “The whole perspective of the Malay language, culture and identity will be preserved.”