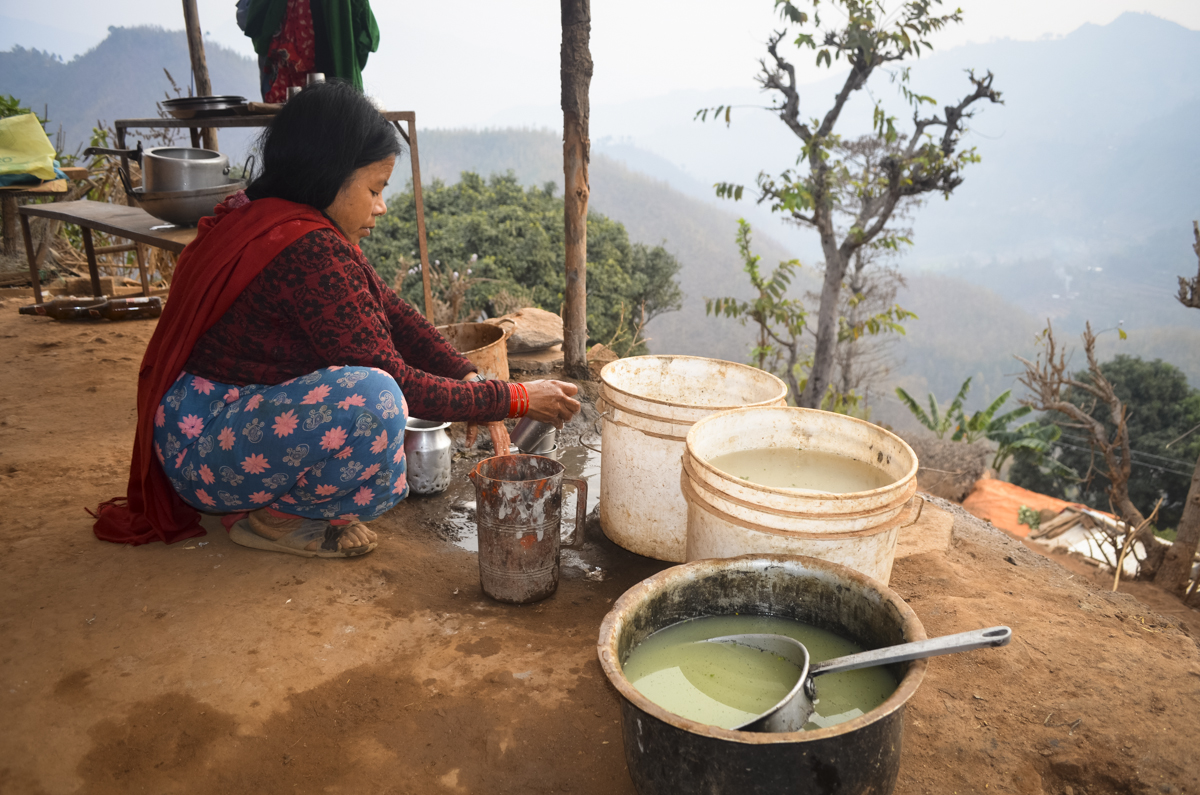 PIDA, NEPAL — Bhanjyange Maila Chepang rests outside the small shack where he lives. He’s just completed a grueling four-hour roundtrip trek to bring two buckets of water to his family of six and their livestock.

The next morning, before dawn, he will have to make the same trek to a large open well named Turlang Kholta, at the outskirts of the  village, to bring another two buckets of water, which he carries in a Doko, a bamboo basket carried with a strap around the head. The trek is a difficult one: It takes him on a rough mountain track, through forested areas, rocky mountains and ravines. 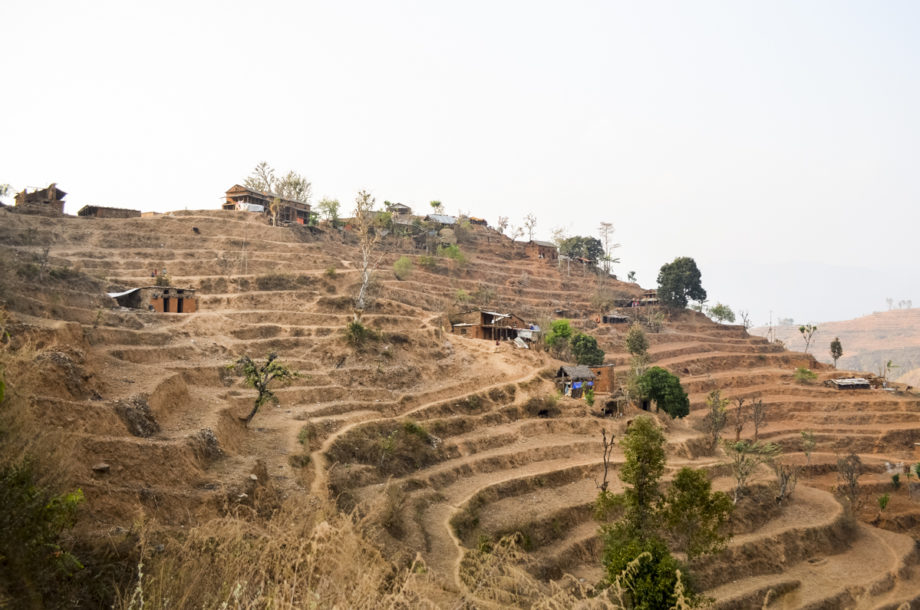 The terraced rice fields are no longer farmed in Pida Village Development Committee (VDC), the area encompassing the village of Tallo Shyame Dada and other villages, due to the lack of water. Five families have already left the village due to the water crisis, and many others are considering a move.

He makes the journey twice a day, every day.

Chepang lives in Tallo Shyame Dada, a village of 61 households in Ward No. 6 in the Pida area of Dhading district, which borders Kathmandu district.

The April 2015 earthquake killed two people and destroyed 45 houses in the village, village leaders say. It also impacted the natural spring that provided water to their village.

In the days immediately after the earthquake, the water gushed from the spring in a powerful flow, Chepang says.

But after a second earthquake on May 12, 2015, considered by some experts to be a powerful aftershock, the spring dried up abruptly, he says. It hasn’t provided any water since then.

For the past 11 months, one or two people from all the households in Tallo Shyame Dada have had to regularly trek to Turlang Kholta to fetch water for themselves and their cattle, Chepang says.

Chepang’s house was among those that collapsed in the April earthquake. He still lives in a temporary hut. But his main worry, he says, isn’t housing. It’s water. Even the well at Turlang Kholta seems to be in danger. 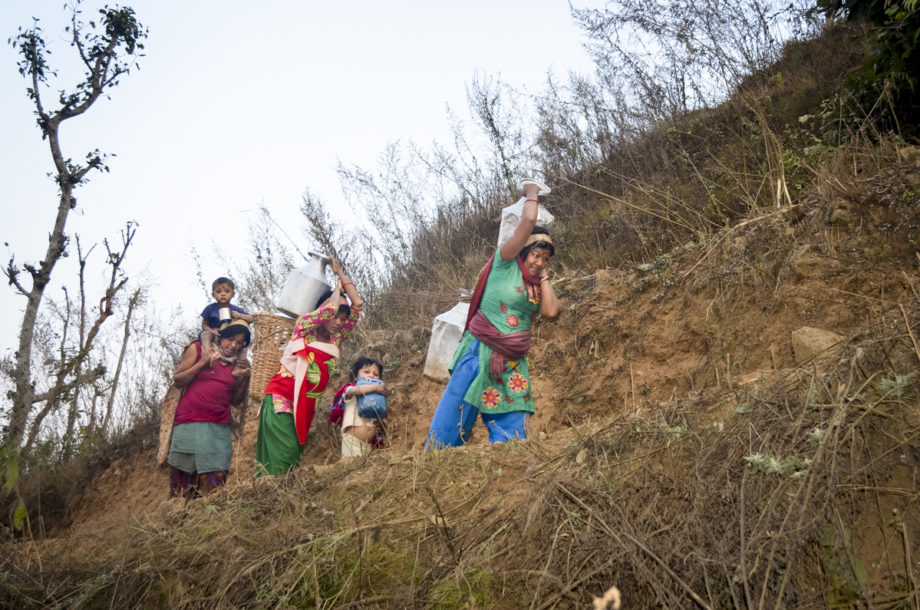 People from every household in Tallo Shyame Dada fetch water from Turlang Kholta, a water source on the outskirts of the village, for their personal and livestock needs. Sanumaya Chepang, 23, middle, makes the four-hour trek to bring back water every day. Sometimes she goes twice a day.

“The water source from where we now bring water is also getting narrower,” he says. “It seems that may also dry up.”

Chepang earns about 10,000 Nepalese rupees ($93.58) a month selling livestock and operating a small grocery store in his temporary hut, as well as selling moonshine he makes at home, Chepang says. This income supports six family members.

He gives the bulk of the water he fetches each day to his two oxen and eight goats, and his family uses the balance sparingly for drinking and cooking, Chepang says. But he worries it’s not enough.

He thinks of moving out of the village, but hesitates to leave his family’s roots in the Pida area.

“This is our ancestral habitation,” he says. “We have been living here for hundreds of years.” 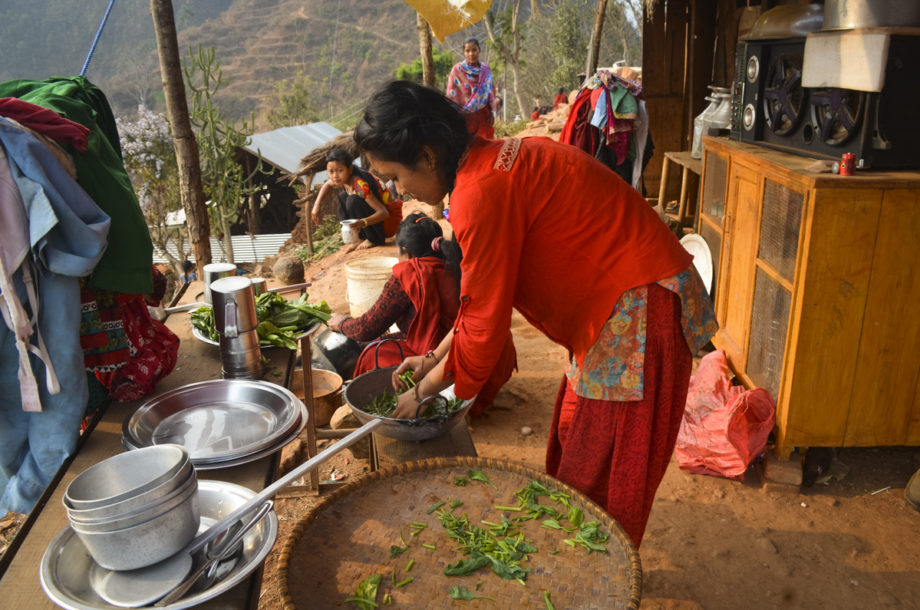 Pabita Chepang, 15, daughter of Bhanjyange Maila Chepang and Sarswoti Chepang, uses just one glass of water to clean the vegetables. The family has had to learn to use water sparingly, even for the smallest tasks.

At the same time, he knows he can’t continue the back-breaking work of carrying water for hours each day. Five families in Chepang’s village have already left, and others are planning to follow.

“How long could we live here if the water crisis continues?” Chepang asks.

Nepalese throughout the country are struggling with similar situations. More than 5,000 springs and wells have dried up or been destroyed by the earthquake in Nepal, according to the Nepalese government.

That’s a natural outcome after an earthquake, says Dinesh Pathak, director of the Geodisaster Research Center of the Central Department of Geology at Tribhuvan University in Kathmandu district.

Sometimes the springs are blocked by moving rocks and earth slips, and sometimes new cracks within the layers of earth underground soak up the water, Pathak says. 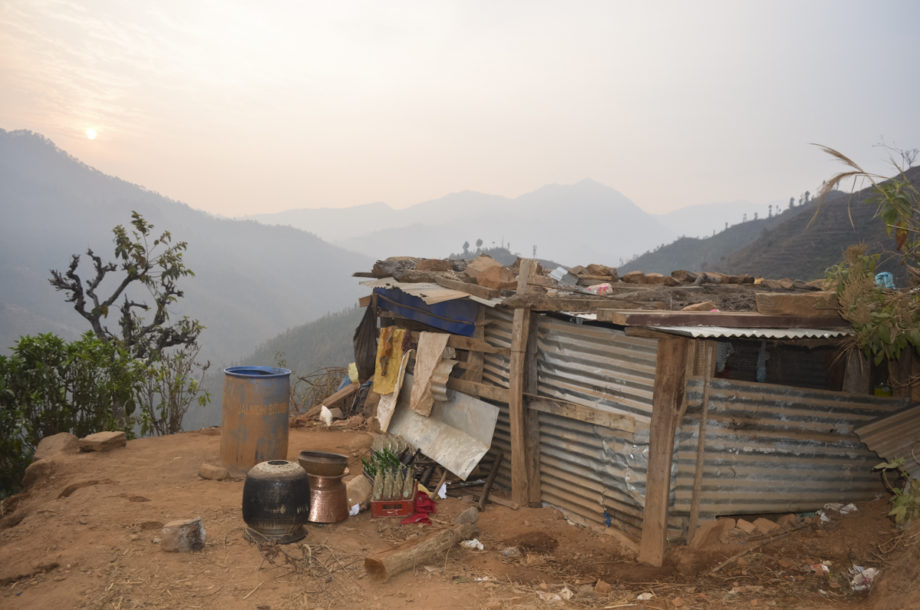 Bhanjyange Maila Chepang, 47, and his family have lived in this tin-covered shed since the April 2015 earthquake destroyed their home. Rebuilding the home, even if Chepang could find money to purchase the material, would be impossible, he says, due to the shortage of water.

The shortage of natural water sources after the earthquake is widespread and severe in the 14 districts that were hardest hit by the earthquake, says Kiran Acharya, an engineer at the Ministry of Water Supply and Sanitation. Another 15 districts are affected less severely, he says.

Dhading district, where Tallo Shyame Dada is located, was one of those severely affected by the earthquake.

There, 364 drinking water sources were damaged, says Rajit Ojha, senior divisional engineer at the Department of Water Supply and Sewerage. Of those, 45 water sources have completely dried up.

For people in the Pida area, the loss of natural water sources is devastating.

Sanumaya Chepang, 23, a lifelong resident of Tallo Shyame Dada, sold her buffalos at a loss because she could not provide them with water, she says. 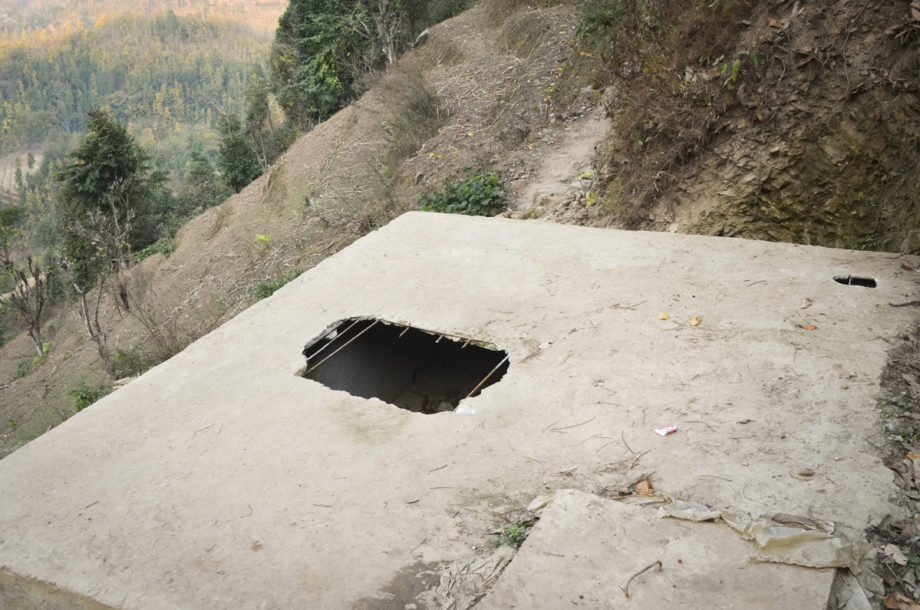 The natural spring in Tallo Shyame Dada was covered and built over to protect it from dirt and falling stones. This spring, which was the source of water for families in this village as far back as they remember, dried up completely after the May 2015 earthquake, which is widely considered to have been an aftershock of the quake in April in that year.

Her family is now entirely dependent on her husband’s irregular income as a construction laborer, she says. On days that he finds work, he earns between 300 rupees ($2.82) to 500 rupees ($4.69).

But this income is uncertain.

“I bring nearly three buckets of water daily,” she says, referring to days when she makes two trips to collect water.  Some days, she can only make the trip once.

She says she’s tired of hauling water on her back for hours.

“The ancestral village should be abandoned if the water crisis continues,” Sanumaya Chepang says. 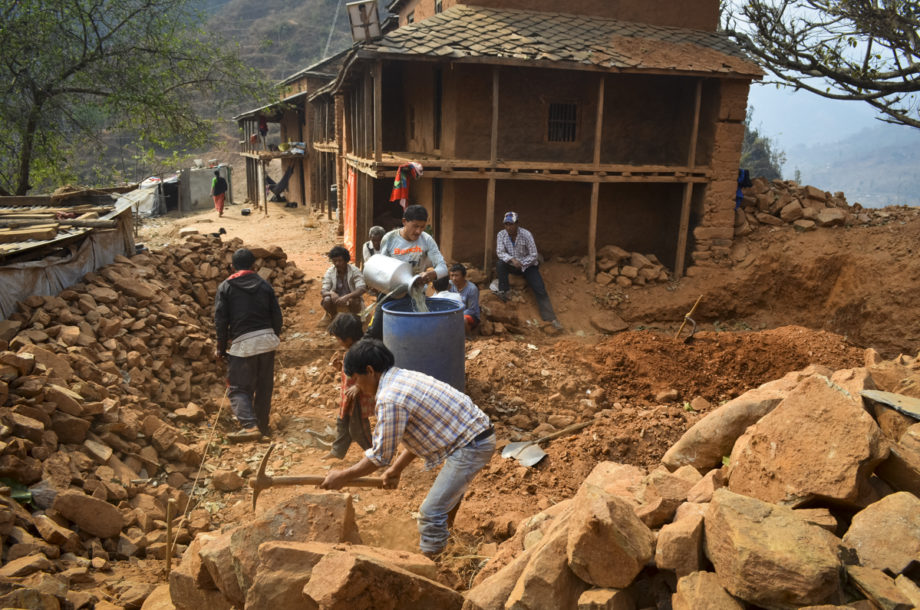 The villagers of Tallo Shyame Dada came together to build a house. Water for all the construction work has to be carried from Turlang Kholta, a journey that takes four hours each time.

Bhanjyange Maila Chepang agrees with her.

Political leaders visit the village when there is an election, he says.

“They leave giving us various promises like they will do this and that in the village,” he says. “But they do nothing. Our life remains in darkness.”

Arjun Bhurtel, the chairperson of the Pida Village Development Committee (VDC), which is the area encompassing Tallo Shyame Dada and other villages, says the government and local leaders are trying to find solutions. 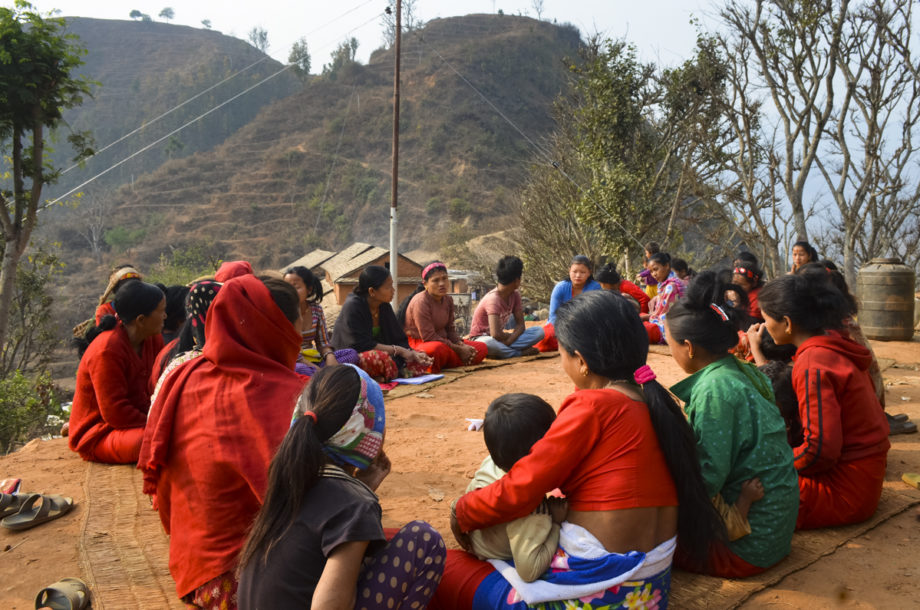 Pragatishil Mahila Samaj, a women’s committee, has monthly meetings to discuss social issues that impact families. Water has been the recurrent theme at all meetings for the past few months, says Sangita Chepang, head of the group in Tallo Shyame Dada.

Those local leaders formed a Drinking Water Consumer Committee in Pida VDC and some villagers have been tasked with identifying new water sources in the area for the villagers of Tallo Shyame Dada, Bhurtel says.

“We are preparing a report about the exact cost required to bring the water to the village from that source,” Bhurtel says.

“It cannot be said that we have done nothing,” he says. “We have been doing as much as we can.”

Government officials say they’re working on a plan, too.

Ojha, of the Department of Water Supply and Sewerage, says the government has collected information about the locations where water sources have dried up after the earthquake.

“The projects are at a stage where the districts that have faced drinking water crisis in the aftermath of the earthquakes are being prioritized for action,” he says.

The government plans to restore all drinking water projects by July 2018, as outlined in the Post Disaster Needs Assessment, Ojha says.

But Bhanjyange Maila Chepang says they need water in their village immediately. They cannot wait any longer, he says.

“If the water crisis continues in the village, we have to move to another village along with our family,” he says.

No sources in this article are related. Chepang is a clan name used by people of the Chepang ethnic group in Nepal.