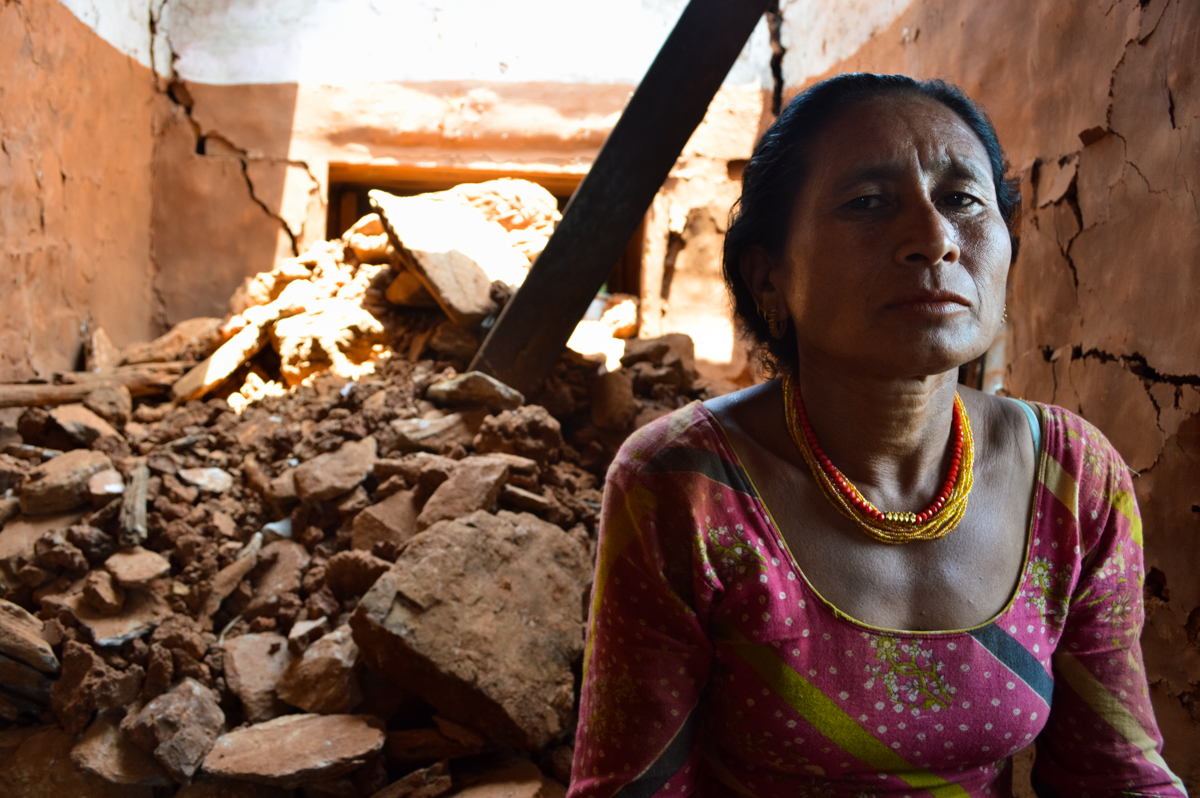 “I was sitting on top of a rock and it shook,” Rashila says. “I thought someone moved it. I looked behind. No one was there.”

Rashila’s father, Kisna Shrestha, ran toward her and told her there was an earthquake.

Rashila was scared. Her brother and sister were alone at home. Their mother wasn’t with them.

“I was worried for them,” she says.

Rashila and her father had gone to the market to buy supplies for the grocery store the family runs out of their home in Suntar, a village on a hilltop in a remote region of the Dhading district. The central Nepal hamlet, part of the Kalleri village development committee, has no road access.

“I was carrying shop supplies,” Rashila says. “But still, I ran uphill towards my home as fast as I could.”

No one in the family was injured, but the two-story family home, which included the family’s grocery shop, was reduced to rubble.

Kisna Shrestha and his wife, Chunna Shrestha, had worked hard to build their house.

“It took us many years to build the house,” Chunna Shrestha says.

The couple had carried cement on their backs from the bridge to their village.

“How will we build a house again?” she says.

“She was so scared that she had fever for three days,” says Chunna Shrestha, Rachila’s mother. “She didn’t eat properly for three days.”

In Kalleritar, another village in the area, some families lost more than their homes.

Vasha Nath Khatiwoda lost his daughter-in-law, Saraswoti, 23, and his granddaughter, Yunika, 7, when the earthquake damaged the family house.

Saraswoti and Yunika, her daughter, were sleeping on a bed when the earthquake came. When they awoke, Saraswoti apparently directed Yunika to take shelter indoors.

“Instead of coming out of the house, she went under the bed,” Khatiwoda says.

“Saraswoti had her arms wrapped around her child when we found the bodies,” Khatiwoda says. “The child was close to the mother’s chest.”

With the help of other villagers, the family removed the bodies three hours after the quake.

The bodies were cremated on the day of the quake.

When 3-year-old Yunisha asked for her mother and sister, relatives at first told her that they had gone to visit her mother’s parents. Yunisha responded that her sister was mean for not taking her along.

“After three days, we told her that her mother and sister had gone to God’s house,” Khatiwoda says. “She hasn’t smiled since then.”

Pratiksha Khatiwoda, 16, who is not related to Vasha Nath Khatiwoda, was among the fortunate few in Kalleritar. Her family was unharmed, and the family house remained standing.

Having completed her secondary school exams, Pratiksha Khatiwoda says she wants to study earth sciences. She’s been interested in the field for two years, but since the earthquake hit, she is confident she wants to pursue a career in science, she says.

“If we have an earthquake next time, then we will know and we can take prevention measures,” Pratiksha Khatiwoda says. “Next time we will be prepared. It won’t affect people badly like this one did.”