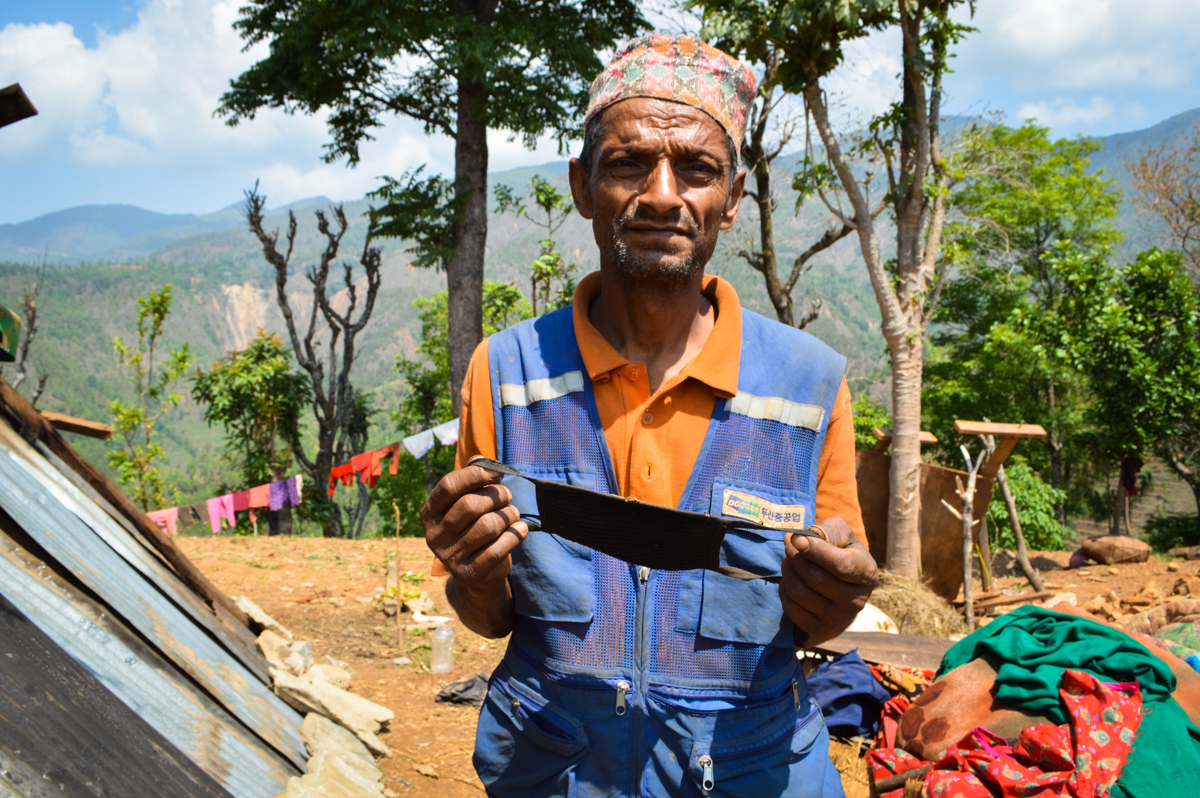 KALLERI DARA, NEPAL – There was a noise, and the ground started shaking.

As soon as he realized it was an earthquake, Bhoto Tamang ran to an electric post about 150 meters from his small grocery store.

“I ran as fast as I could,” he said. “I tripped three times before I reached the electric post.”

As soon as he reached it, Tamang clipped the wires from the battery.

Kalleri Dara is a village on a hilltop at the end of a road in rural Nepal. It is home to about 120 families, a mix of the Damai, Bahun and Tamang castes. Most homes in the village were destroyed in a 7.8-magnitude earthquake that devastated huge sections of Nepal. Aftershocks, which continued for days, caused more damage and delayed recovery efforts.

Tamang’s family – his wife, four sons, daughter, three daughters-in-law and two grandchildren – had already eaten lunch and were outside when the quake happened. No one was hurt.

Tamang was able to save two buffaloes.

“I took them out and tied them out in the open, away from the collapsing houses,” he says.

A third buffalo, along with a goat and many chickens, died in the quake.

The family home and the grocery store were destroyed.

“Everyone lost their homes,” Tamang says. “But the biggest fortune is that we are alive.”

“If everyone had died in the earthquake it would have been better,” Tamang says. “Some are living and some are dead. It is not fair.”

It has been one year since Raja Ram Adhikari’s father died of heart disease. On May 5, the one-year anniversary of his death, the family planned to hold a puja, a ritual, to mark the end of their formal mourning. Adhikari, 32, and his family members were to remove their white mourning clothes and host a Hindu priest who would lead a spiritual ceremony. Flowers, plant leaves and food, such as rice and yogurt, were to be used in the ritual.

Since the earthquake, Adhikari and his family don’t know how they’ll have the ceremony.

“Everything we have is lost,” says Til Kumari Adhikari, Raja Ram Adhikari’s mother. “Everything we need for the ritual is inside the house.”

The family home, a two-story stone structure, was destroyed.

No one in the family as inside when the earthquake struck.

“There was a noise. Then the house collapsed at once,” Raja Ram Adhikari says.

All the family’s belongings were in the house.

“A week has passed since the earthquake and we still have not received any aid,” he says. “No one has come till now.”

The village, always a rural outpost, is more isolated than ever.

“We have no idea what is happening outside,” he says. “We have no source of information.”

The family has no way to get the things it needs for the ritual. The shops were destroyed.

The first anniversary of a death is a critical moment for Hindus.

“We cannot postpone the date,” says Raja Ram Adhikari. “We don’t know what to do.”

The people of Kalari Dara lived in fear for three days after the April 25 earthquake, as aftershocks continued to rock the earth.

The carcasses of animals killed in the quake started to smell. People worried about diseases.

“Both my sons, of 12 and 6 years, have fever and diarrhea,” says Raja Ram Adhikari.

Four goats and a cow in Adhikari’s house died in the quake. The carcasses started to smell, but the family did not have the manpower to remove them.

The situation was the same throughout the village. When the aftershocks stopped, people of all castes worked together to remove the carcasses, eschewing cultural mores that govern how castes interact.

“We removed the dead animals and buried them so that diseases don’t spread,” says Bhoto Tamang, who owned a grocery store destroyed in the quake.

Nanda Prasad Ghimire wore a mask when he helped move the animals.

“It is needed,” Ghimire says. “We can catch diseases.”

It took three days for the villagers to remove and bury about 70 animals.

“We worked for 12 hours for three days from seven in the morning,” Ghimire says. “I am wearing the same clothes since the earthquake. I don’t have a change of clothes.”

The villagers also organized a night patrol. Their homes destroyed, villagers are living outdoors with all their belongings.

“We take turns to patrol the village at night so that people don’t steal,” Ghimire says.

Ten to 12 people patrol each night until midnight.

More than a week has passed since the earthquake, and still no outside help has arrived.