Skip to main content
The story you are reading was published on Monday July 17, 2017. To read more recent stories click here. 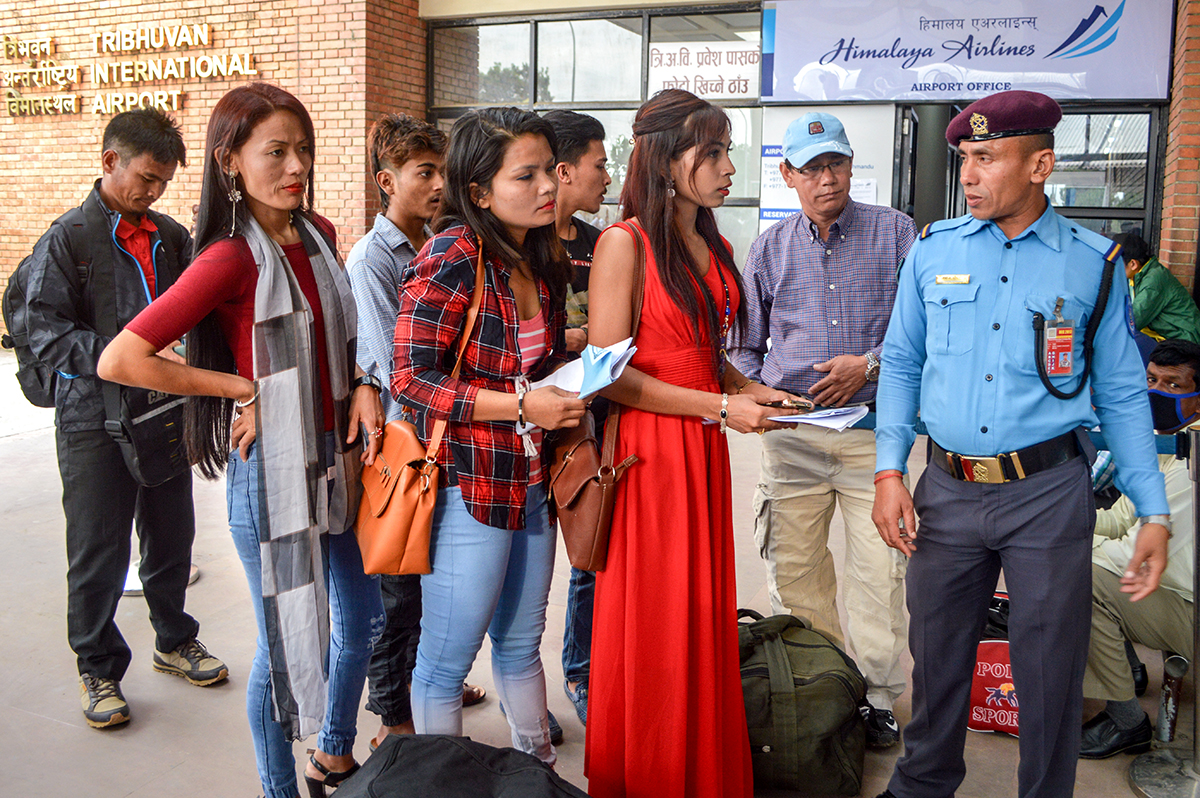 KATHMANDU, NEPAL — The 12 women sitting in a meeting hall at the Department of Immigration in this capital city are visibly weary. They had a chance, they thought, to earn some money by working as housemaids in Saudi Arabia.

But in early May, when the group reached the airport in Dubai, a major transit hub in the United Arab Emirates, they were turned back to Nepal. They couldn’t tell immigration officials for sure where they were heading. Some say they believed they would go to Saudi Arabia, but their passports indicated otherwise.

The officials were convinced that the women were being trafficked into potentially dangerous situations.

The women say they were told that there are no costs associated with moving abroad for people who intend to engage in household work. It was an irresistible possibility for women from regions where jobs are few, poverty is high and parents often can’t afford to educate their children.

“I suddenly jumped into the decision without understanding anything when I was asked whether I would go abroad,” says Sunmaya Tamang, 40.

The case spurred Nepal’s lawmakers to discuss drafting a new policy that would require labor agreements with foreign countries before women take domestic jobs in those places, in an effort to eliminate trafficking.

The current ban is only the latest in a series of actions intended to protect women from being trafficked. The 1985 Foreign Employment Act required women to get their guardians’ consent before they could leave. In 1998, women were required to get government permission in addition to a guardian’s permission.

The women made it to Dubai despite a ban, enacted on April 13, on work permits for women going abroad to work as housemaids. Even women who have returned from such jobs for holidays or extended visits are not allowed to return.

The 12 women all slipped across the border to India, then took a flight to Dubai. They say they weren’t aware of the ban.

The government has also asked India to return Nepali women if they are caught at Indian airports without proper documents, says Ganga Ram Gelal, director general at the Department of Immigration.

The border between Nepal and India is open, but anyone traveling through an airport must carry official documents.

Prabhu Sah, chairman of the parliament’s International Relations and Labor Committee, says the committee has directed the Ministry of Labor and Employment to sign labor agreements with Persian Gulf countries to ensure that Nepalese housemaids in those countries will have health benefits, a good salary, job security and non-violent working environments – all in line with Nepal’s Foreign Employment Act. Women are expected to be cleared for foreign work as housemaids once Nepal signs those labor agreements.

The Gulf countries are of particular concern because foreign workers in those places work within the Kafala system, which requires them to seek their employer’s permission before leaving a job or leaving the country.

According to the Department of Foreign Employment, just under 170,000 Nepalese women have gone abroad for work between 2006 and June of this year. About half a million labor permits were issued to Nepalese workers, both men and women, heading abroad during the 2014-2015 year alone, according to data from that department.

The current ban is only the latest in a series of actions intended to protect women from being trafficked.

The 1985 Foreign Employment Act required women to get their guardians’ consent before they could leave. In 1998, women were required to get government permission in addition to a guardian’s permission. Women were later banned entirely from going to Persian Gulf countries for domestic labor jobs. That ban was later lifted but partially reinstated in 2012, when a new rule prohibited women under the age of 30 from going to those countries for domestic work.

Another ban, which lasted between May 2014 and April 2015, restricted female migrants under the age of 25 from heading to Persian Gulf countries for jobs in the domestic work sector. 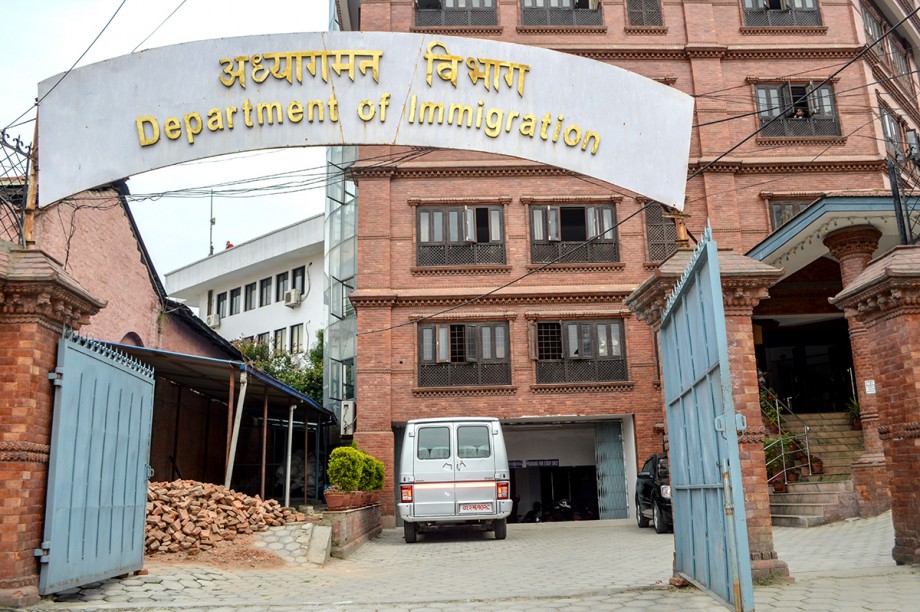 Women who were caught at an airport in Dubai, a city in the United Arab Emirates, were deported to Nepal and held in Kathmandu’s Department of Immigration, pictured, when they returned.

When two Nepalese GPJ reporters left Nepal in 2016 to report on migrant labor issues in Qatar, airport officials worried that they didn’t have enough cash on hand to care for themselves or return home and that they might be lured by human traffickers. The officials required the GPJ reporters to withdraw more cash at an ATM before they were allowed to board their flight.

Human rights organizations and international agencies broadly agree that many Nepalese people are vulnerable to human trafficking, whether for exploitative labor or sex abuse.

But while the travel bans could keep women from unwittingly agreeing to jobs in which they might be exploited, forcing them to stay home could push women to cross borders without any documents at all, women’s advocates say.

“Let’s do the labor agreement as soon as possible and stop women from going abroad in an illegal way,” says Sunita Danuwar, executive director at Shakti Samuha, an organization that combats human trafficking.

An official at the Department of Foreign Employment told GPJ that the ban is likely to make daily life difficult for the women and their families, as well as for Nepal’s economy as a whole. The official asked not to be named because he is not authorized to speak on the issue. Most of the women come from areas where jobs are scarce.

Remittances – the money sent from migrant workers to their families back home – have been key in reducing poverty in Nepal, according to data by the Asian Development Bank. More than half of the country’s households receive some form of remittances.

That money from abroad makes up more than 30 percent of Nepal’s gross domestic product, according to World Bank data – the highest rate on record and many times more than most other countries.

I suddenly jumped into the decision without understanding anything when I was asked whether I would go abroad.Sunmaya Tamang, 40, one of the women in the group that was turned back to Nepal

For the women who can’t find work in Nepal, offers for jobs abroad are sometimes irresistible. In most cases, migrant workers must pay various fees before they even leave Nepal. But the 15 women who were turned back in Dubai say they were told they wouldn’t have to pay a dime up front – an option that is common for housemaids, and which can indicate potential future exploitation.

“They do not spend a single rupee to go abroad,” says Sumitra Shrestha, an officer at Maiti Nepal, a nonprofit that helps trafficked women. “They are like a commodity.”

The dozen women who were turned back from Dubai stayed at Maiti Nepal when they arrived in Nepal.

Shrestha says those women were about to be trafficked. They’d been lured by an offer of 25,000 Nepalese rupees (about $242), she says.

Several of the women gave GPJ the name of the person who approached them with job offers. GPJ placed a call to the person’s mobile number, but the phone was turned off.

Such scenarios are common. Gelal, of the Department of Immigration, told GPJ that about 2,700 women were deported from airports in Kuwait, Bahrain and Saudi Arabia in 2016 alone.

But for some women, coming home feels as bleak as risking exploitation abroad. Tamang, the woman who says she jumped at the chance to leave Nepal, is from Dhangadhi, a city in Kailali, a district in the country’s far-western area. There, she struggled to feed her three children.

When her husband took up with another woman, she decided to leave.

Now, she’s back where she started.