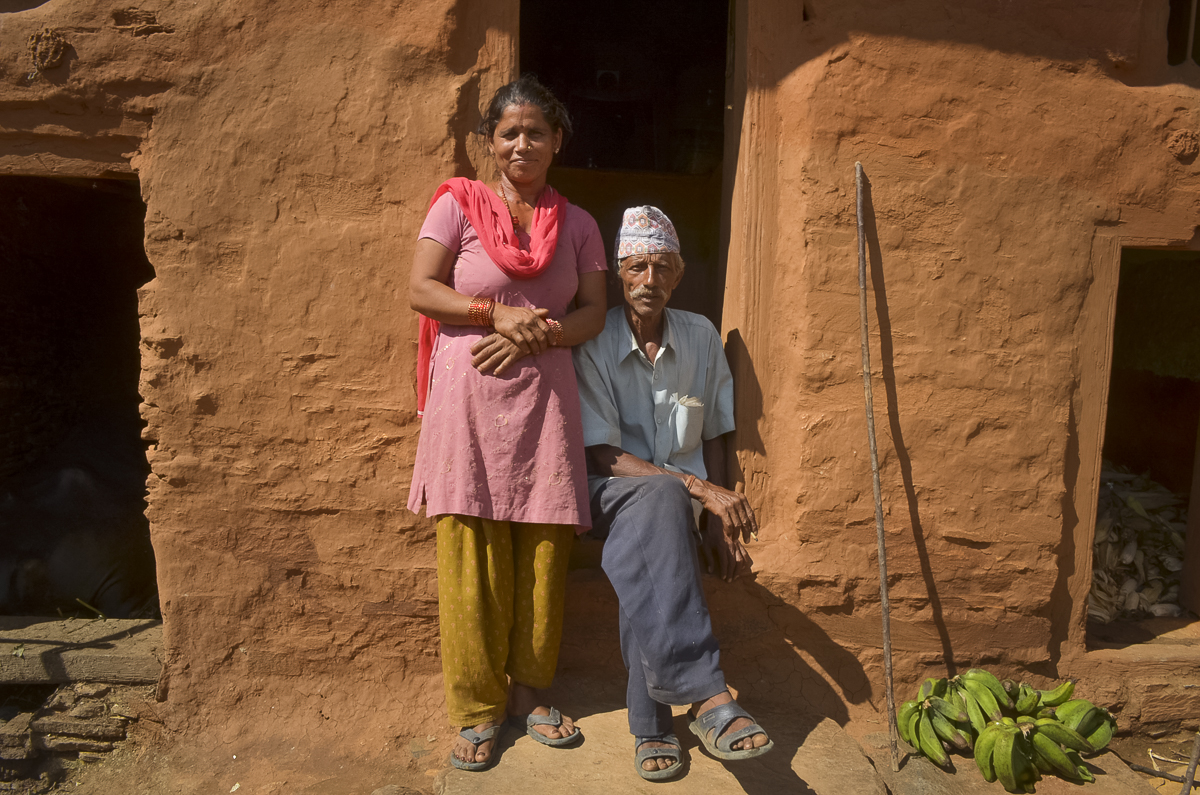 SREEKOT, NEPAL — Nandaram Bhatta cleans the small, dark shed attached to his mud-and-brick house, where he rears two buffalo and two oxen in the mountain village of Sreekot in Baitadi district.

He’s back home after three decades away. The 55-year-old left Sreekot as a young adult to earn money, but he says he doesn’t have much to show for those years. His earnings were barely enough to sustain his wife and children, and he returned in 2011.

Bhatta earned about 12,000 Nepali rupees ($112) a month working as a private driver in Pithoragarh in India’s northern Uttarakhand state. The family saved a little money over those years to buy livestock, but now Bhatta also does seasonal farming on about 2 ropani (a quarter of an acre) of land. There’s no water source or irrigation, so he only grows crops during the rainy season. The food feeds the family for about four months, Bhatta says, and there’s never any left over to sell.

Despite Bhatta’s experience, his two older sons, ages 22 and 17, are now working in India, for an electrical repair company. The oldest has been there for about three years, and the second son left Nepal in 2015. Both studied up to 10th grade, but there were no jobs in the village, so, as people here have done for generations, they headed to India.

“What can they do even if they study more?” Bhatta asks. “They can’t go anywhere better and earn a lot of money.”

Many Nepalese from other districts go to Malaysia and the Middle East for work, where they earn some of the highest wages that are possible for Nepalese migrant workers. But villagers in remote areas including Baitadi district say it’s faster and cheaper to go to India.

The three-hour bus ride to Pithoragarh from Baitadi district costs about 1,500 Nepali rupees ($14). The trip to Kathmandu, Nepal’s capital city, takes two days and costs about twice as much.

And the manpower agencies that recruit in other regions don’t seek workers in some of Nepal’s most rural areas.

But this lack of access to other opportunities means that families here are stuck in a cycle of poverty that has repeated for generations.

What can they do even if they study more? They can’t go anywhere better and earn a lot of money.Nandaram Bhatta, who worked in India for three decades, and whose sons now work there

India was once the primary destination for the vast majority of Nepalese migrant workers. The long, shared border between the two countries is open, and people crossing aren’t required to show passports or other documentation, so it’s impossible to track the number of Nepalese workers who go to India, sociologist Ganesh Gurung says.

India lost its preferred status in the mid-1980s, when other countries, including those in the Middle East, opened their doors to foreign workers, he says.

Nepalese workers took full advantage of those opportunities. The country’s 2011 census found that one in every four households had an absent family member—nearly 2 million people in total—most of whom went to a foreign country.

Foreign worker remittances make up nearly 28 percent of Nepal’s GDP, with 589.5 billion Nepali rupees ($5.5 billion) being remitted in 2014-2015 fiscal year, according to a report published by the Ministry of Labour and Employment.

Manpower companies and agents usually find workers in urban and semi-urban areas, but they don’t recruit in rural areas because there aren’t enough potential workers to justify the effort and cost, says Bimal Dhakal, president of the Nepal Association of Foreign Employment Agencies.

There are manpower agents in 56 of Nepal’s 75 districts, he says. Baitadi district is among those where there are no registered agents.

Chaudhary’s data is based on handwritten records kept by his office. An independent tally wasn’t available, but the numbers match the accounts provided by local people. 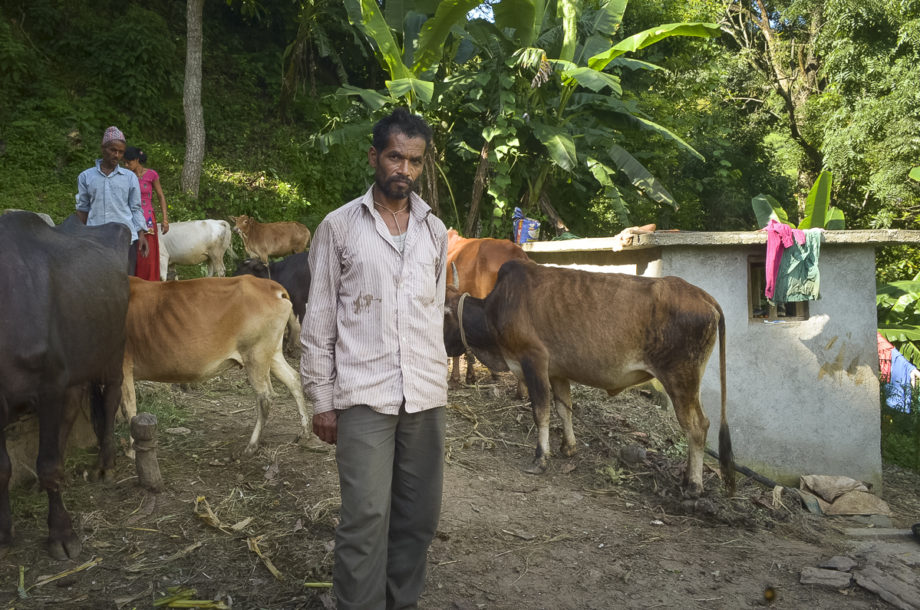 Every household in Ward 2 of Sreekot village has at least one family member working in India, says Karbir Nath, that ward’s representative.

Sreekot has road access. Many villages in Baitadi district don’t. And Sreekot has police and health posts, as well as a village market. Despite these amenities, which many villages in the area don’t have, there aren’t any jobs, Nath says.

“For more than 200 years, people have been going to India from here,” Nath says, referring to Sreekot. “Almost all our forefathers used to go to India to earn an income.”

“My life has gone back to the time of my ancestors,” he says.

“Even educated youth have to go to India because they don’t have access to recruiting firms and information about the employment in gulf countries,” Karbir Nath says. “As a result, they have to work at a very low wage and live a poor life.”

Some question whether it’s worthwhile for the men to leave at all.

“The best years of their life is spent working in India,” says Binita Bhatta, 27, whose husband works as a security guard in India. 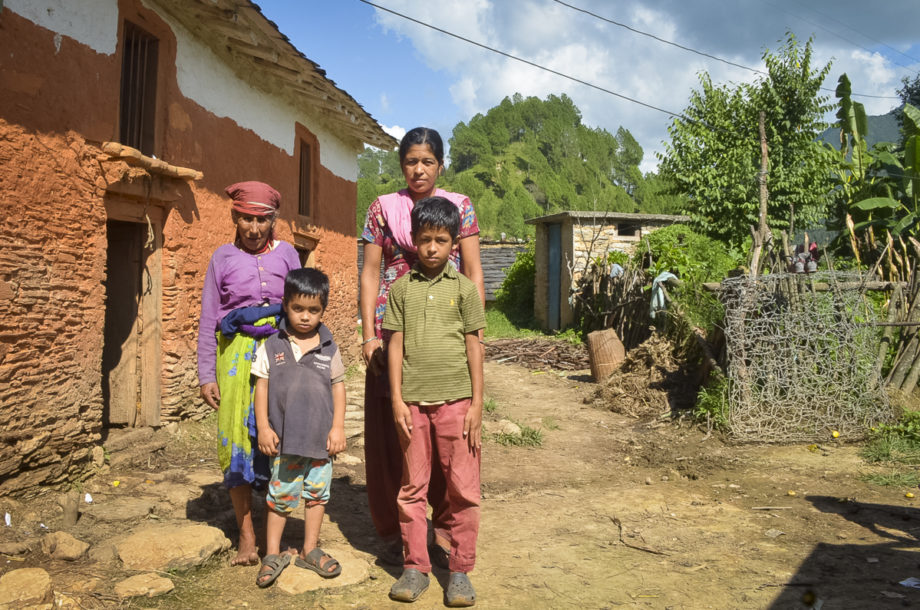 Binita Bhatta, 27, stands with her two sons and her mother-in-law, Radha Bhatta, in Sreekot, a village in rural Baitadi district.

He studied up to grade 10 and tried for years to find a job in the area, Bhatta says. He finally gave up and went to India, where he’s been for nine years. He visits his family in Nepal once every few years.

“There is work anywhere for those who want to work,” he says.

There are government efforts to boost employment in rural areas, says Shatrughna Prasad Pudasainee, the director general of the Department of Foreign Employment. Programs include those that focus on agriculture, livestock and vocational training, as well as those providing information about foreign employment.

And some local people say Baitadi district has natural resources that could be used to develop an industry for oil, soap and other products.

“Many young people will take jobs in their own village if industries are opened to utilize such resources and raw materials,” says Karbir Nath, the ward representative.

But Nandaram Bhatta says he can’t put his faith in government plans for future jobs in Nepal. Instead, he hopes the government will encourage manpower companies and agents to come to remote areas like Sreekot to recruit workers for the Middle East.

This lack of access is their biggest challenge, Bhatta says.

“If anyone had said they can send my son to a higher-paying country, I would have done it even by borrowing money,” he says. “Our living conditions might have improved by now.”

EDITOR’S NOTE: No sources are related in this story.