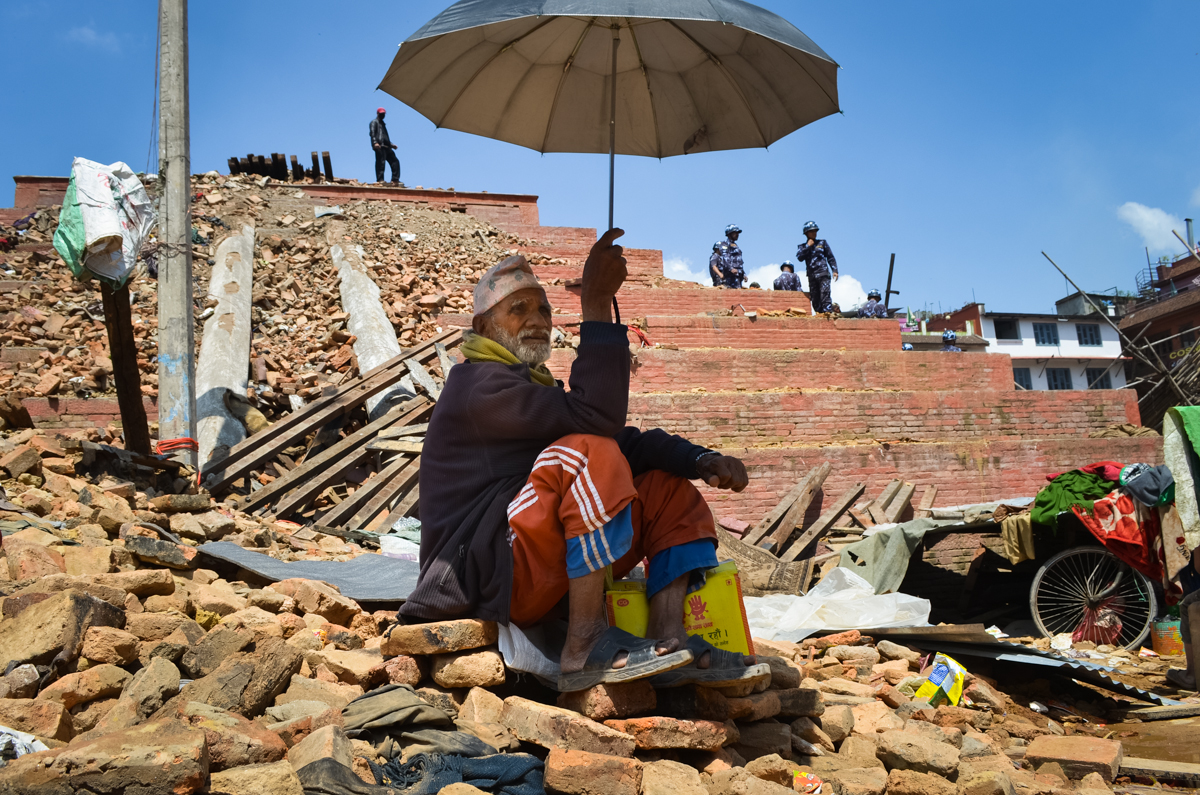 Most of the culturally and historically important temples in the square lie in ruins. Police collect the scattered shoes, clothes and bags of people trapped in the rubble.

“It was heaven,” Dulal says, pointing to the broken temples. “But it suddenly changed to hell.”

Following common practice, many people were resting under the overhanging roof of Maju Deval temple Saturday when the 7.8-magnitude earthquake struck, bringing down the temple.

“After the earthquake, along with the temple, the people are also resting forever,” Dulal says.

In addition to taking lives, the collapse of revered structures in Hanuman Dhoka Durbar Square in the April 25 earthquake consumed a sacred part of Nepal’s cultural identity as well as a critical source of livelihood, social life and tourism.

More than 90 percent of Kathmandu’s important cultural heritage sites have been destroyed, Bhesh Narayan Dahal, director general of the Department of Archaeology of the Ministry of Culture, Tourism and Civil Aviation says in a phone interview.

All declared World Heritage Sites, the squares display cultural artifacts of the Newar people, the traditional civilization of the Kathmandu Valley. Their intricate structures of brick, stone, timber and bronze exhibit fine craftsmanship, according to UNESCO.

Hanuman Dhoka Durbar Square is the Durbar Square in Kathmandu. Most of the buildings and temples were built between the 15th and 18th centuries. The earthquake leveled monuments here and in the valley’s other two Durbar Squares.

Hanuman Dhoka Durbar Square used to attract thousands of locals and tourists a day. Kathmandu residents gathered here to visit over tea. Tourists flocked to the square, providing a livelihood for vendors.

The quake destroyed Kasthamandap, a historic temple built from the wood of a single tree. Kathmandu took its name from Kasthamandap, the biggest temple in the square. People used to sit under its roof. Dozens of people resting there Saturday were killed, and hundreds were injured, according to the local police department.

The Nyatapola Temple, a nine-story temple, was reduced to three stories. The walls of Shiva Parvati Temple cracked. About half the Kumari Ghar, the house of the living goddess believed to be an incarnation of the Hindu goddess Taleju, was destroyed.

One section of the Hanuman Dhoka Royal Palace, which houses two museums, collapsed. Various walls in the complex collapsed or cracked.

Local residents grapple with the loss of life, culture and livelihood.

Dulal has been selling water, cigarettes, noodles, biscuits and other snacks from his four-wheeled cart for 30 years. He was pushing his cart toward Kasthamandap, in the outer courtyard of Hanuman Dhoka Durbar Square, on Saturday when he suddenly felt as if he were fainting, he says. He fell down in the road.

As people realized it was an earthquake, they started crying and running.

“I couldn’t stand up from the ground since I lost my consciousness when people started crying and running,” Dulal says.

After some time, a police officer rushed to him and woke him up. Semiconscious, he hardly managed to look around.

“I saw everything collapsing,” he says, “and I felt I am in some other place, not the same place I was before.”

Many people used to come to spend time in this beautiful place, he says.

“After three hours of devastating experience, these temples only rest in our memories,” he says. “I felt so sad.”

In the aftermath of the earthquake, Dulal wonders if the decline in visitors will put him out of a job.

“Now where should I go and do my business, which is the basis for my earning?” he asks. “Who would come to this place now, which has turned into a desert-like place?”

“But now, everything around has made me despair and feel hopeless,” he says.

Magal Magar, 20, says he is grateful to be alive. He was working at a bakery in Hanuman Dhoka Durbar Square when the earthquake struck, he says. He was making tea when the building started shaking.

A co-worker shouted that an earthquake was underway and told Magar to run. He ran outside and saw the Trailokya Mohan Narayan temple collapse with a loud noise.

“I just put my hand on my head and sat where I was and thought, ‘I am going to die,’” he says. “My mind wasn’t working.”

After 15 minutes, Magar slowly opened his eyes and called for his co-worker.

“I was a little bit far away from the temple, and so I was saved,” he says. “But the brother who was saying ‘Let’s run!’ died when the temple collapsed.”

As of April 28, 4,680 people had died and 9,239 people had been injured, according to the Ministry of Home Affairs. The government has estimated that 1,672 houses have been destroyed and 2,597 others have been damaged.

Magar used to come to this temple with his friends when they were bored.

“Now it’s only a dream to be under the temple and gossip with my friends and relatives,” he says. “When will this place be the same as it was before? When?”

Jagadish Das Manandhar, 74, says he felt his heart breaking Wednesday as he surveyed the debris in Hanuman Dhoka Durbar Square.

“I felt so much pain inside, I couldn’t put into words,” he says.

“When I look around now, I only remember those dead people and remainings of temples,” he says. “Now, how can we celebrate our festival?”

The area surrounding the square also incurred damage in the earthquake.

Rita Manadhar says her house, located near the square, was destroyed. So she came to stay in the open area here after the earthquake.

“It took my house,” she says. “I am worried about where to stay and what to eat.”