Skip to main content
The story you are reading was published on Wednesday April 29, 2015. To read more recent stories click here. 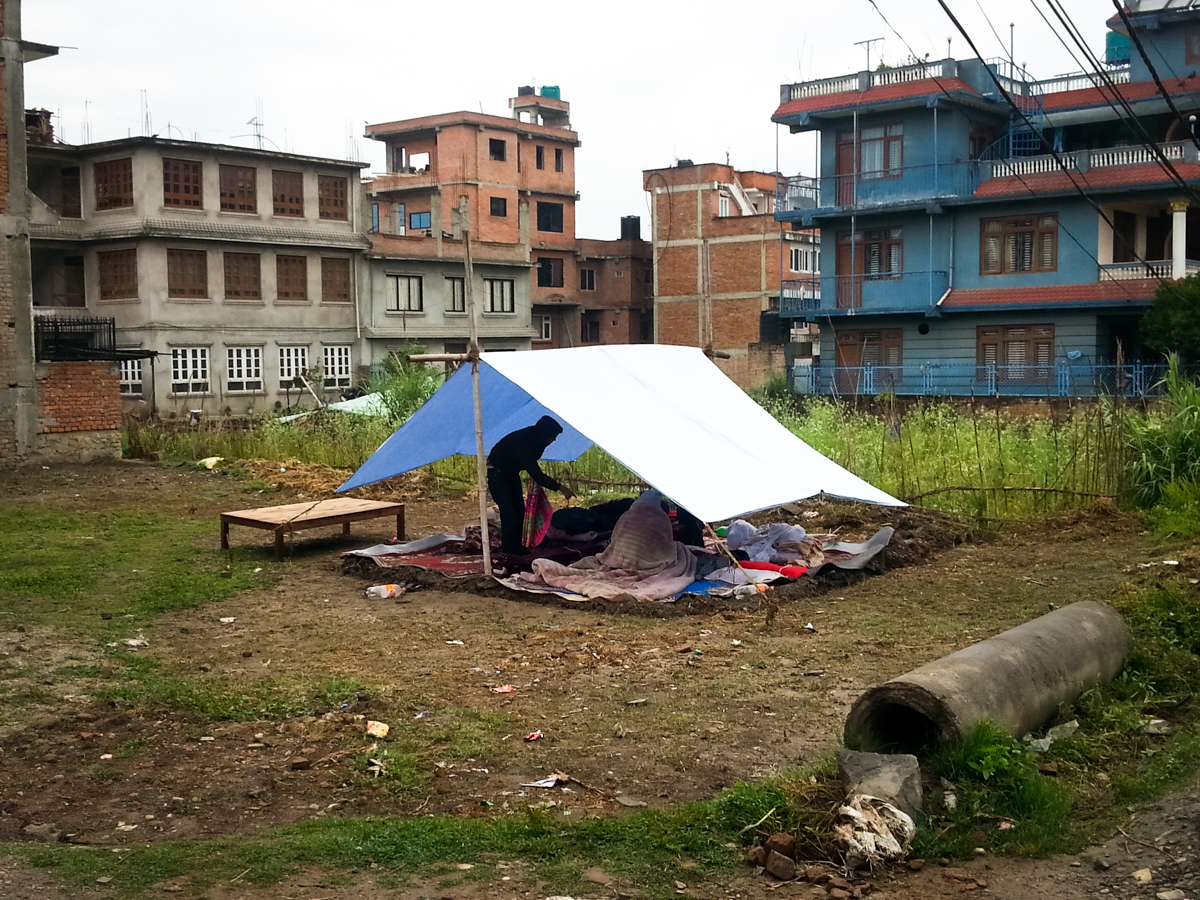 KATHMANDU, NEPAL – Rain abates, and few stars peek through the clouds in the inky sky. Under a tent illuminated by solar-powered lamps, a rookie musician strums a guitar as others sing off pitch.

What may sound like a campground singalong is actually the way these displaced earthquake survivors in Bhaktapur, one of three districts constituting the Kathmandu Valley, are coping with the aftershocks that have struck since Saturday’s earthquake forced them out of their homes and into weathered tents.

“The first jolt was very scary,” says the guitarist, Sanjaya Rai, an engineering student. “We haven’t been able to sleep since then. So music helps us to divert our mind, and it is better than doing nothing and panicking.”

Bhaktapur ranks among the areas most affected by the earthquake in Nepal, according to local media reports. Beleaguered by continual aftershocks, tent dwellers across Sallaghari, a neighborhood in Bhaktapur, fear a second major quake.

“Music is something that helps us to cope with the anticipation as we hear about speculation about a possible earthquake,” Rai says.

The people of Nepal have yet to fully assess the magnitude of the devastation. The 7.8-magnitude earthquake that struck Nepal on Saturday has killed at least 4,300 people and has injured more than 8,000, according to government figures released Tuesday. The quake and scores of powerful aftershocks have displaced nearly half a million people.

“It is difficult for the government to conduct the rescue operations, as there is no end to this calamity,” says Anup Nepal, alternate coordinator for the communication department of the Ministry of Home Affairs’ National Emergency Operation Center.

Khumananda Gyawali, the district adviser for the Nepal Civil Service Employees’ Association, says the government must focus its resources on the areas of Bhaktapur most affected by the quake.

Local media reports estimate that 80 percent of infrastructure in the old city has collapsed. The old city’s Bhaktapur Durbar Square, the seat of the former Bhaktapur kingdom, was leveled.

“It is not that government is not doing anything, but the enormity of the calamity makes it difficult for the government to be present everywhere,” says Gyawali, who is also living in a tent in Sallaghari. “This earthquake has sent Nepal a hundred years back.”

Caught between the hostility of nature and a government with limited resources, quake-shaken Nepalese face their circumstances with resilience.

Mahendra Mandal, 46, has given away tents and plastic covers to make tents rainproof here in Sallaghari. He used an extension cord to draw power from a solar battery in his house to set up his TV in the field so people could watch the news. He also brought out a multiplug so people could charge their phones. He has joined efforts to clear debris from the roads.

Assisting others amid the calamity helps Mandal to divert his mind from his predicament, he says.

“I do not believe that we have to wait for the state to help each other,” Mandal says. “We make the government. This is a time of need, and if we don’t act now, when will we?”

Babita Sedhai, 30, who is also staying in a tent in Sallaghari, agrees.

“Here, we are positive that we survive depending on each other,” Sedhai says.

People have set up communal kitchens and are cooking food together. They are buying tents for those who cannot afford them. They are sharing water with those whose underground tanks were cracked in the quake. They are assessing damage on one another’s homes and advising on whether it is safe to move back in.

“Yes, the government should provide some relief to us,” Sedhai says, “but we are relatively better-positioned than millions of other people who have lost their family members.”

The situation is worse in villages, where people who have lost their houses have nowhere to go, she says. There is less open space to erect camps in villages, which sit on small plots or on hillsides. There is also less access to markets to buy food.

“The government has to target its relief work to the rural areas that are most affected,” Sedhai says.

Nepalese who are less affected by the disaster should help those in more distress, Gyawali agrees.

Government officials also need to care for their own families as the tremors continue, says Nepal, who is staying with his family in a tent in Sallaghari.

“I am a human first and then a government official,” he says.

Community members here are supporting one another emotionally. They talk, cheer one another up, crack jokes and sing Hindu hymns. They assure one another that they will get through this and that the calamity will pass.

And they are already looking ahead. They are planning how to make the community safer, noting the importance of having open space for refuge in case of earthquakes, both Mandal and Gyawali say. They vow to extract lessons from the disaster.