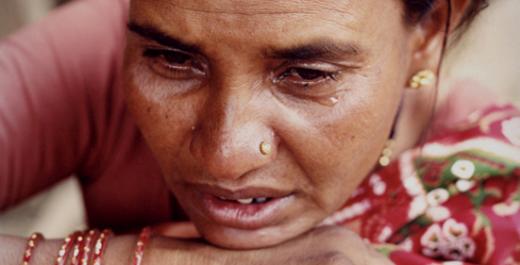 POKHARA, NEPAL -- It was 10 a.m. and only a few patients had eaten their morning meals.

Patients peered out their door ways and moaned in their beds in a sprawling ward of Manipal Teaching Hospital, which lies on the outskirts of Nepal’s famous tourist city Pokhara, some 150 miles from Kathmandu.

Chitra Kumari Pun, 48, is lying on her back. She had kidney dialysis yesterday. The somber mood of the ward was suddenly disturbed by a loud sound from outside. “Something must have fallen from the roof,” Pun says.

Seconds later, the hospital ward became a flurry of activity. Doctors, nurses, staff and policemen flocked to the scene.

Slowly, a rumor emerged that someone jumped off the roof.

A few hours later, police confirmed the rumor and released the identity of the deceased – Tul Bahadur Pun, 52. He was Chitra Kumari Pun’s husband. Police recovered a suicide note from his pocket that read: "I killed myself because I could not afford medication for my wife."

Three hours after the announcement, Pun still had not been told. She was beginning to ask for her husband, who was scheduled to arrive hours before. A nurse told her that he went to clear the hospital bills and to the cafeteria to have a meal.

After another 30 minutes she became anxious and sent her daughter, Jyoti, to find out who jumped off the building. It took her daughter over an hour to return. She says her “blood ran cold” as several of her relatives, who had never come to visit her in the hospital before, began to arrive.

Rudra Bahadur Shrestha, a niece, says Pun spent all of his money and sold all of his property to pay for his wife’s kidney treatment – a rare and expensive procedure here. “Often I heard him saying ‘I cannot save my wife’,” she recalls.

Tul Bahadur arrived in Pokhara with his daughter Jyoti four days earlier to be with his wife during yet another kidney treatment. Jyoti says the family’s medical nightmare began four years ago, after her mother complained of stomach pains and a local faith healer was unable to help. She has been bedridden and undergoing dialysis twice a month for the last two years.

According to Jyoti, Pun paid more than 40,000 rupees, $575 USD, for treatment every month at Manipal Hospital, a private facility. The average Nepali family earns just $200 USD per year. “Our family spent some 1.2 million rupees ($17,000 USD) in treatment the past two years. My father jumped off the third floor of the hospital to his death because he could not manage the health expenses anymore,” Jyoti says.

Tul Bahadur was not alone in his poverty-fueled desperation that led to suicide. According to the Investigation Unit of the Nepal Police Department, suicide cases triggered by poverty are increasing by the day. Police records indicate that 2,456 people committed suicide in 2008 compared to 3,149 in 2009. The number is likely higher as suicides in rural areas are not likely reported. Police records, investigation notes and evidence collected revealed that poverty was the stated reason for suicide in 60 percent of all cases here. Suicides have increased in 48 of Nepal’s 75 districts in the last five years. “Records show the increasing trend of suicide. And poverty is the main reason for this crime,” says police inspector Krishna Prasad Pangeni of the Crime Investigation Department.

Dan Bahadur Thapa, police investigator, says cases of poisoning children before committing suicide and taking minors while jumping into the rivers and lakes are also on the rise, but an inability to afford medical treatment was the most common reason for suicide in the last two years.  Despite a 2008 law guaranteeing free health care, more than 60 percent of Nepali people do not have access to free care. And mental heath care remains highly stigmatizes and scarcely available.

Last month, on the other side of the country, Kalpana Ghimire, 28, of Morang, an eastern district bordering India, committed suicide too. In her suicide note she revealed that poverty and an inability to care for her sick 10-day old baby was the reason. “Nobody is guilty in this incident,” she wrote in the suicide note to her husband, Sundar Ghimire, a daily wage laborer. Their baby girl had frequent seizures and they could not afford medical care.

Professor Chudaraj Uprety, a local expert on poverty alleviation, says he has seen medical expenses drive many people to suicide. “They have no other alternatives. The government does not provide them with basic services and unemployment is [high],” Uprety says. “The people cannot afford medication if a family member gets sick and pay education fees for their children, and manage two square meals,” he says.

At Kathmandu’s Bir Hospital, the oldest and arguably cheapest health care institution in the country, doctors and nurses say they have seen a marked increase in the number of patients admitted after a failed suicide attempt. “More than 80 percent of patients who attempt suicide come to Bir,” says Dr. Bashanata Pun. “They all are from poor economic backgrounds.”

According to hospital records, 651 people have been admitted to Bir after failed suicide attempts since June of 2009. A report released by the hospital last month revealed that 143 of the patients who were admitted after a failed suicide attempt said they wanted to die because of poverty related to their inability to afford medical treatment for themselves or a family member. “Many reported that they could not fill their bellies, [care for] family members, or could not pay rent,” the report revealed.

On January 15, 2008 the Ministry of Health announced that  the government would provide free primary health care services to all citizens through its nationwide health posts and clinics. Yet nearly three years later, only 38 percent of people here have access to government funded health care.

Dr. Rajiv Pun, an official with the Ministry of Health, says even Nepal’s small affluent population “become a paupers” in the event of a major treatments like cancer or kidney dialysis. “The people who are unable to afford even [aspirin], cannot even think of getting treatment if they suffer heart or kidney disease or cancer,” he says.

For Tul Bahadur, who sold his all of his land and cattle and took loans from neighbors and relatives for his wife’s treatment, he had no other alternatives to pay for his wife’s expensive treatment. Because Manipal Hospital is a private hospital, she was not eligible for government-funded care and hospital officials could force Pun to leave because of unpaid bills.

Doctors recommended that Pun under go dialysis twice a week, but Jyoti says her mother was only able to have it once a week due to the lack of money. “Mother’s health was deteriorating despite spending a huge amount of money. Father was in tension, but I never thought he could make such harsh decision,” she says.

But with 46 percent of the population unemployed, according to the Living Standard Measurement, paying medical expenses remains impossible for many.

Dr. Nirakarman Shrestha, a senior psychiatrist and former health minister, operates one of the few mental health facilities in the country. He says the number of patients visiting his mental health clinic is on the rise. “Most of the patients are poor. Some of these patients say that they want to commit suicide. One chooses to kill [them]self when the feeling of depression, due to a lack of hope and poverty, is the problem,” he says.

In Nepal, a person seeking mental health care is often called weak. A person who commits suicide is thought to return as an evil spirit to haunt relatives. Rights activist on mental health issues Jagannath Lamichhane says while more and more people are at risk of committing suicide, traditional views do not support mental health and preventative care.

Lamichhane says suicide is a fixable social problem and has urged the government to address the problem as a social and public health concept. “The government should provide employment and basic needs to the suicide prone community, train health workers and keep surveillance over social discrimination and inequality,” he says.

But as poverty remains the number one reason for suicide here, Lamichhane’s “suicide prone community” could be defined as more than 60 percent of the population.

For Chitra Kumari Pun, the future is uncertain. After the death of her husband on hospital property, doctors have not yet discharged her despite the fact that she has not been able to afford the necessary medications or routine treatments. Dr. Srijana Pradhana of Manipal Hospital, who is treating Pun, says it would not be in her best interest to discharge her. While private hospitals have occasionally opted to treat a patient without charge, Pradhana says there is no formal policy to determine who is eligible for free treatment in a private facility.