Skip to main content
The story you are reading was published on Friday June 19, 2015. To read more recent stories click here. 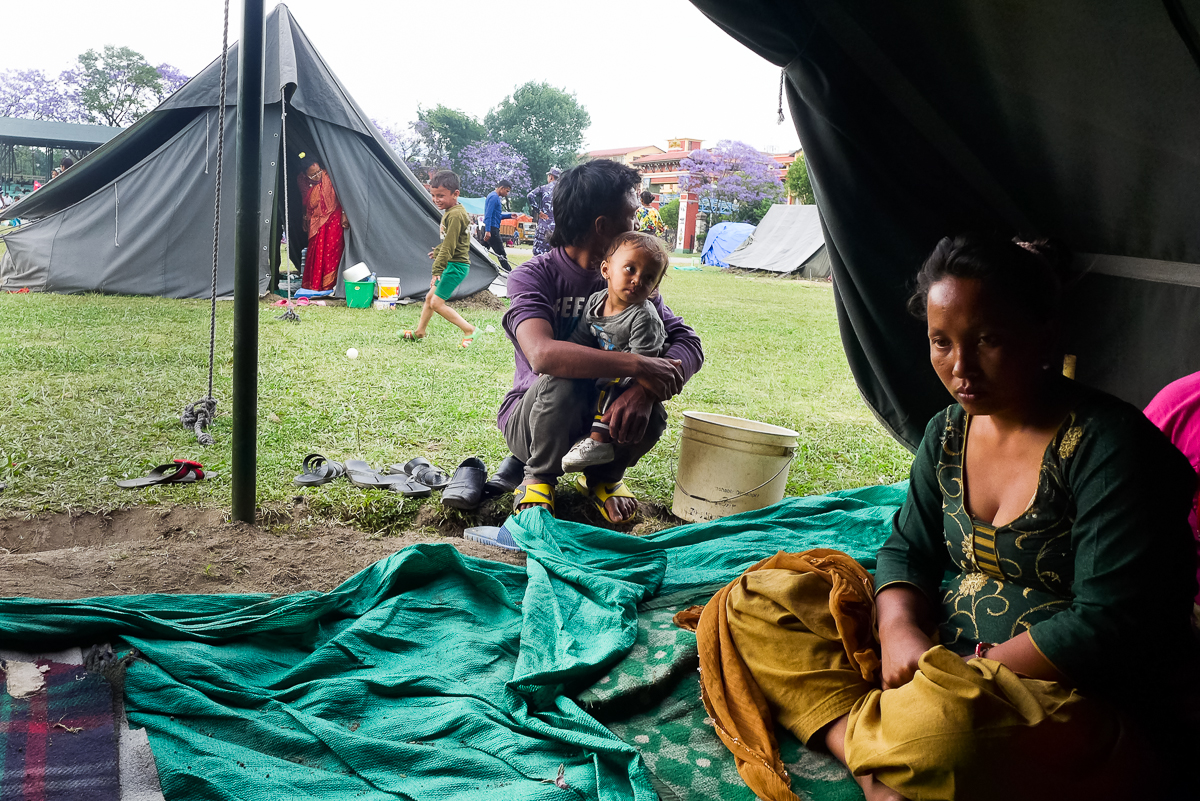 KATHMANDU, NEPAL — Bina Niraula, 31, and her two youngest sons are eating biscuits and drinking tea on the open grounds of Tundikhel, a public gathering spot in the center of the nation’s capital, when a 4.5-magnitude aftershock shakes the ground.

Niraula grabs the boys, ages 2 and 7, runs to their tent and takes refuge on a makeshift bed covered with old, dirty clothes.

“The earthquake took away my shelter, clothes and my job,” Niraula says. “My daily routine has been shattered completely. I feel overwhelmed in this crowd.”

Niraula and her three younger sons have been living in Tundikhel since May 12, when the second major earthquake of the year – a 7.3-magnitude temblor – destroyed the three-story building where they rented a room.

Her eldest son, 16, has been living with relatives about 300 kilometers (186 miles) away from her in Sarlahi district since 2011 because she could not afford to raise him.

Niraula, although married, has been living as a single mother for 10 years; her husband visits only occasionally.

Niraula moved to Kathmandu from Sarlahi district in 1998 immediately after she married. She has been working as a day laborer in construction ever since, carrying bricks, sieving sand and mixing concrete.

Her daily wages are the family’s only source of income, Niraula says. She used to earn 400 rupees ($4) a day; her biggest single expense was the monthly rent of 2,000 rupees ($20). When she could not find daily work, the family struggled to make ends meet, she says.

Still, even after the first earthquake – a 7.8-magnitude quake that struck April 25 – Niraula thought she had a good life, earning her living through hard work.

But after the second earthquake destroyed her home, her entire outlook changed.

“There is no proper toilet, nor a bathroom, no place to change our clothes or sleep at night,” Niraula says. “All of a sudden, we are faced with such a problem in our lives.”

Family members know their refuge in Tundikhel, such as it is, is only temporary.

“We won’t be allowed to live in the tent for a long time,” Niraula says. “I do not have my own land in the village as well. I worry day and night about where to go and what to do.”

She lost all the family’s belongings and her savings of 5,000 rupees ($50) when their building collapsed, Niraula says. Unable to find work since the first quake hit on April 25, she has no money.

“There is no certainty when I will get back to work,” she says. “What do I do now?”

The earthquakes and subsequent aftershocks collapsed and damaged buildings in Kathmandu and surrounding areas. On May 18, the government banned construction to give legislators time to mandate earthquake-resistant building standards. Until mid-July, the government is permitting only the construction of earthquake-resistant buildings of up to two stories and preapproved minor repairs to damaged houses.

Day laborers who earned their living on construction sites in the Kathmandu Valley say the construction ban has severely affected them. The loss of their only income has compounded the loss of their houses, rented rooms and traditional village homes, forcing them to move to temporary shelters in open areas.

About 500 day laborers died and 1,700 were injured in the earthquakes, according to the General Federation of Nepalese Trade Unions, a confederation of 20 unions. 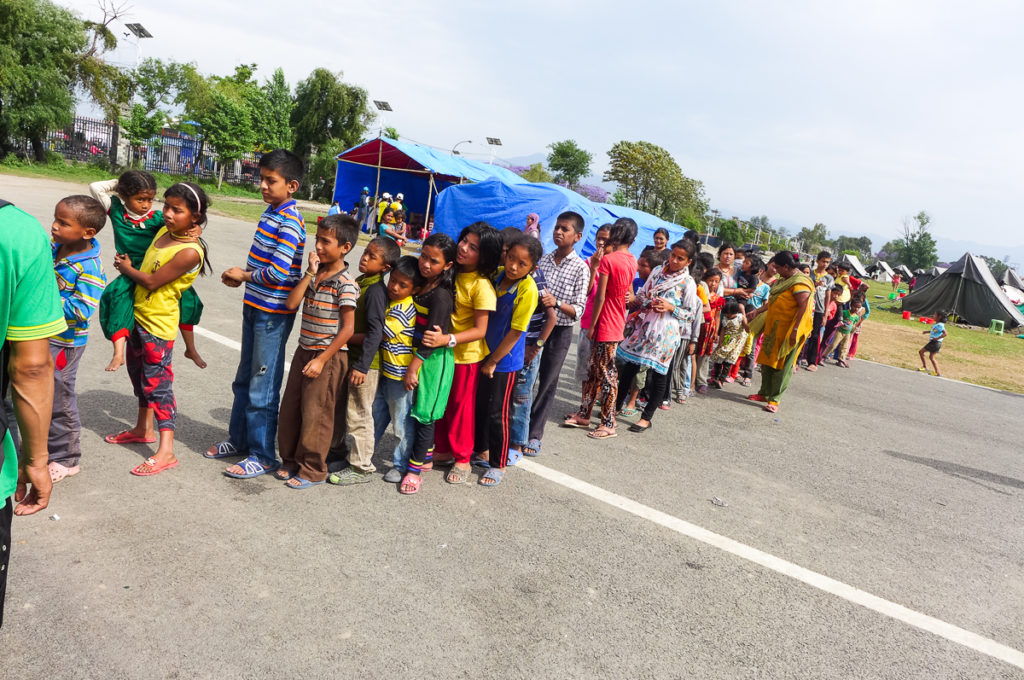 The children of day laborers queue up to receive stationery provided by donors in the Tundikhel camp in Kathmandu. 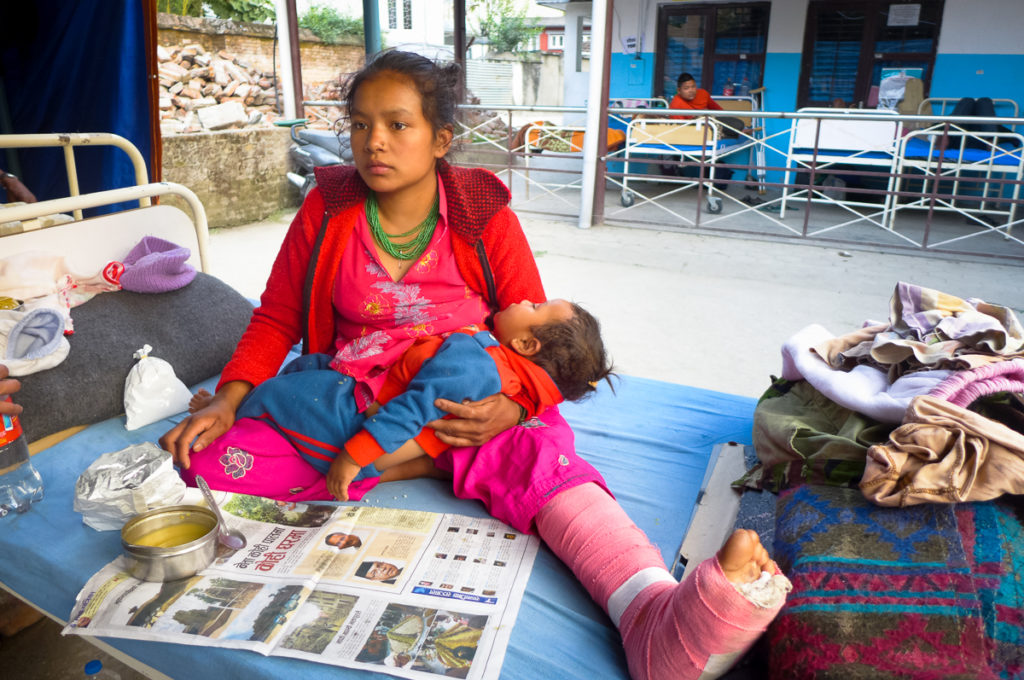 Kamala Thami, 23, was rescued from Dolakha by helicopter five days after the April 25 earthquake, which took the life of her one-month-old son. She breastfeeds her 2-year-old child as she recovers from a broken leg at Nepal Police Hospital, Maharajgunj. Her husband, Yam Bahadur Thami, 26, is a day laborer in their village. 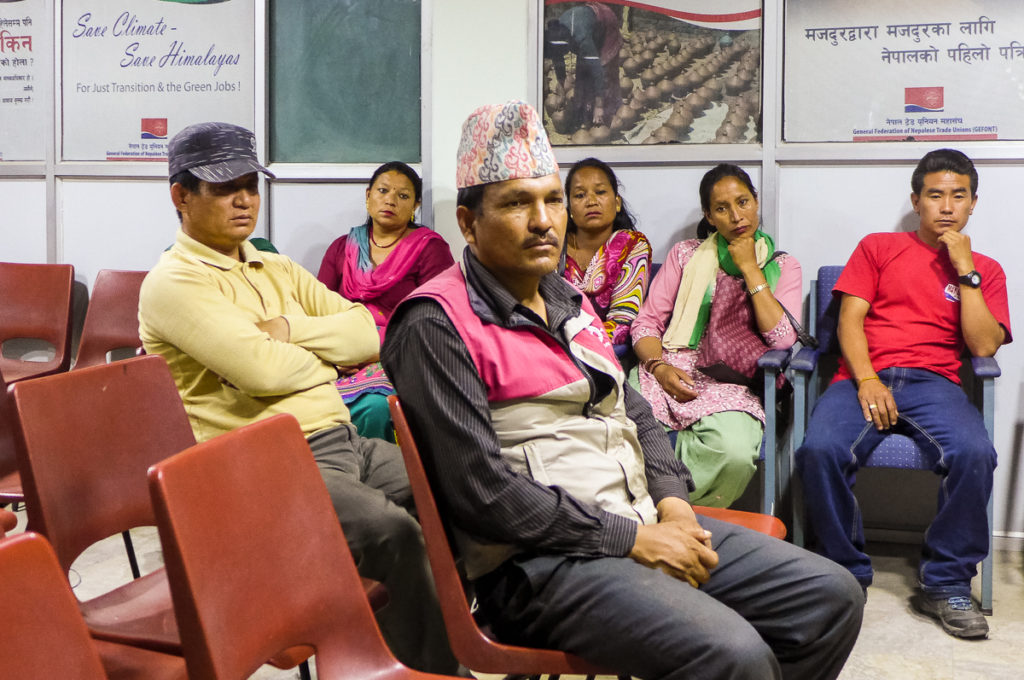 Members of the Central Union of Painters, Plumbers, Electro and Construction Workers Nepal discuss the needs of unemployed construction workers in a meeting at the General Federation of Nepalese Trade Unions building. The government has halted most construction in Nepal pending changes to the nation’s building codes, putting an estimated half a million laborers out of work. 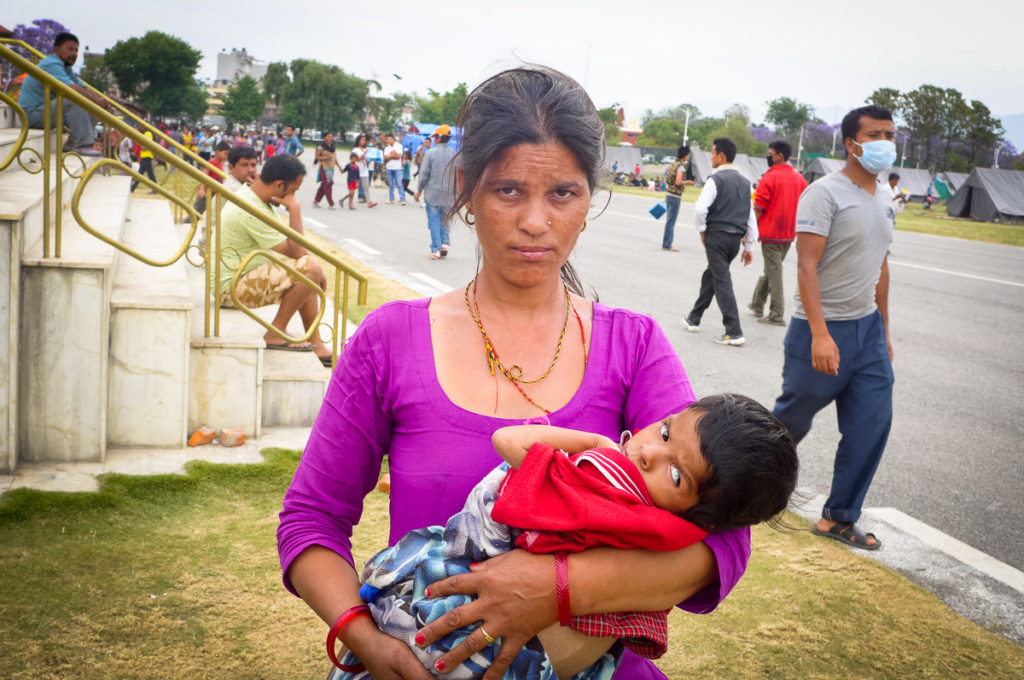 Jhakka Kumari Dhungana, 37, carries her 6-year-old son, who has disabilities. The mother of five and her husband used to work as plumbers. She stopped working after she gave birth to a disabled child. The lack of construction work worries her. 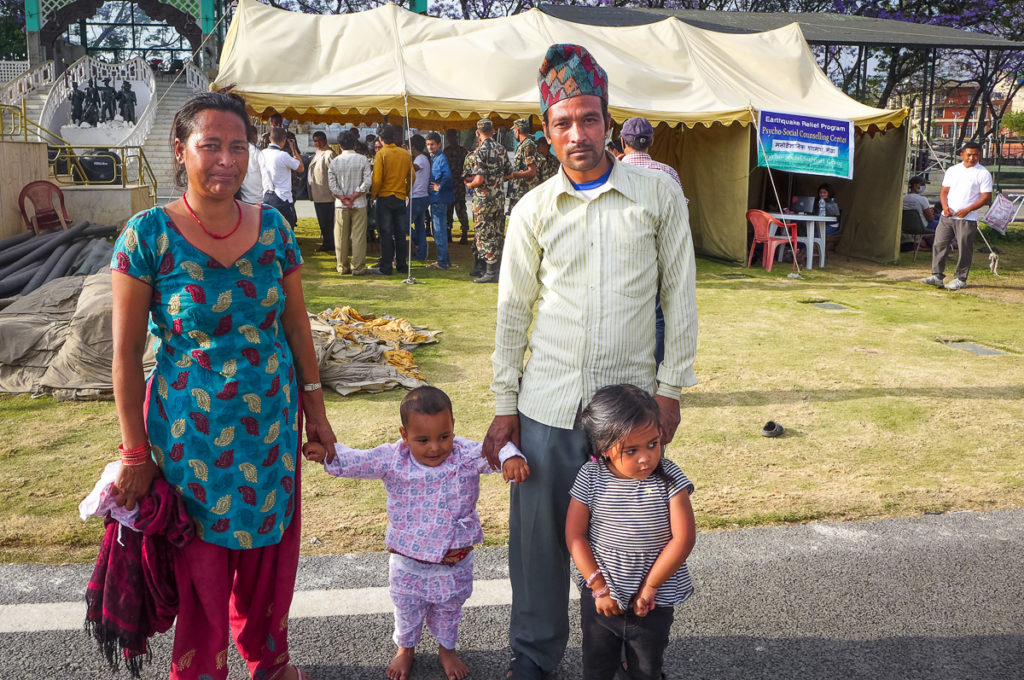 Ravi Baral, 33, who has been working as a day laborer for 10 years in Kathmandu, with his wife, Parbati Baral, 28, their 3-year-old daughter and their 16-month-old son. 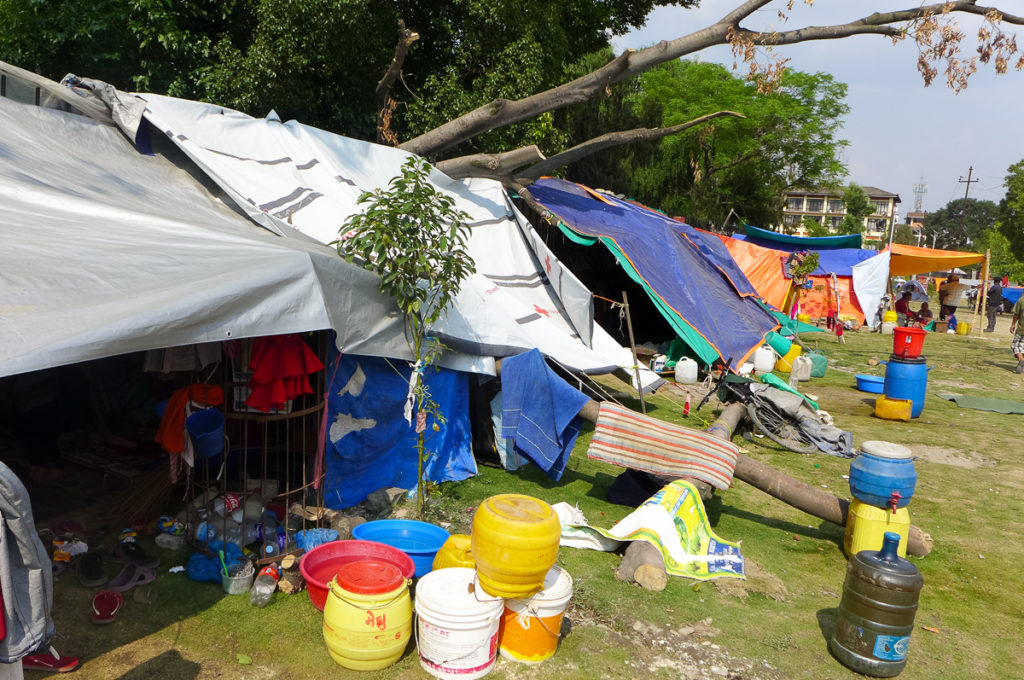 Many of the families taking shelter in tents in Tundikhel, Kathmandu, are headed by day laborers who have been out of work since the government halted construction pending changes to the building code. 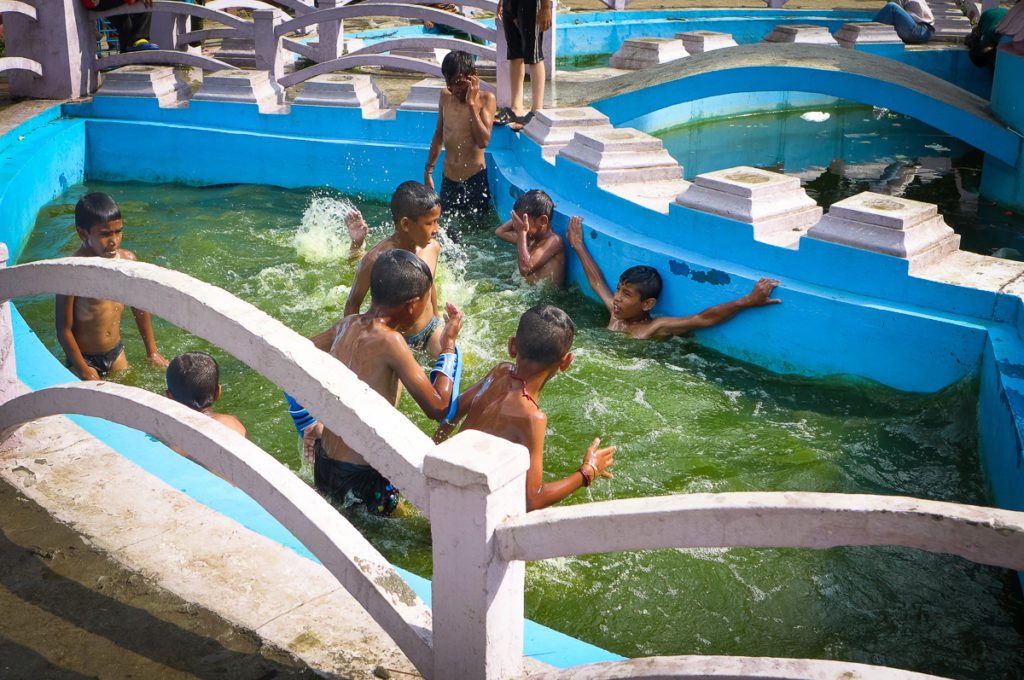 The children of day laborers living in the Tundikhel tent community swim in dirty water in Kathmandu’s Ratna Park to beat the midday heat of 35 degrees Celsius (95 degrees Fahrenheit). 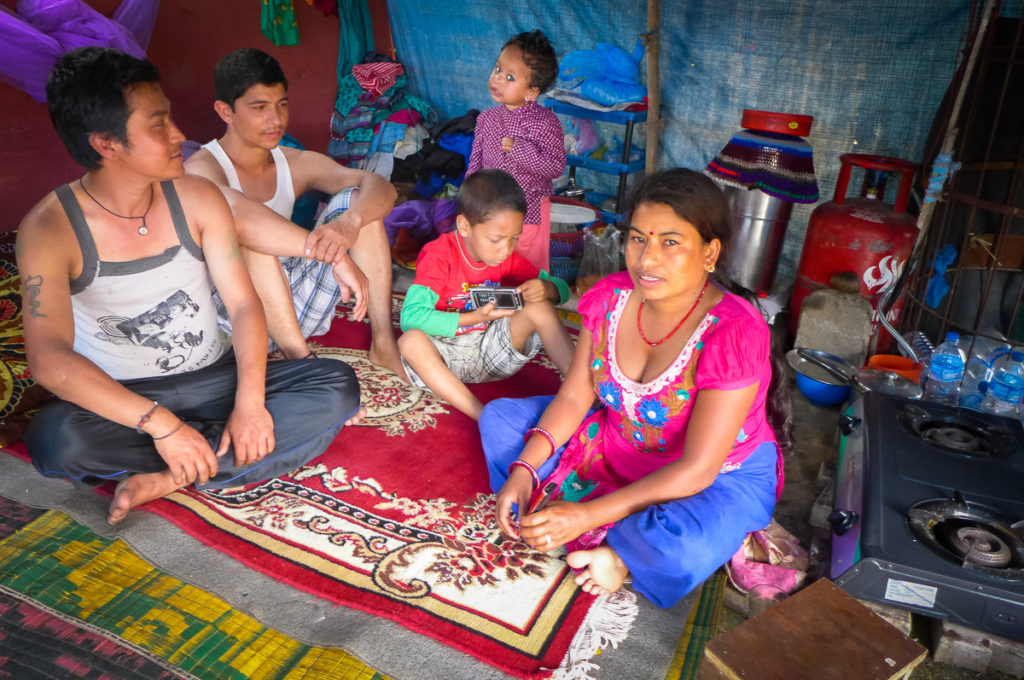 Bikram Khadgi (left), 32, a day laborer in Kathmandu, his wife, Sharmila Khadgi 21, and his relative Rajesh Khadgi, 23, moved their belongings out of their rented room after the building collapsed. Having received no relief, they are living on a single meal a day that they buy with money borrowed from friends.

More than 500,000 day laborers in the construction sector in Kathmandu, Lalitpur and Bhaktapur have lost their jobs, Mishra found. About half are women.

The woes of day laborers worsened when the Nepalese government announced the construction moratorium, says Manohari Siwakoti, the secretary general of the Central Union of Painters, Plumbers, Electro and Construction Workers-Nepal.

Siwakoti acknowledges that the government ban is good for the future of the construction industry as it will improve building standards. But it has directly affected day laborers, who do not have money for food, he says. Widespread unemployment may lead to protests and unrest on the streets.

“The daily wage worker does not have job security,” says Siwakoti, himself a day laborer in the construction industry for 27 years. “They use up the money as they earn it. There is no provision for saving.”

In addition to losing their income, thousands of day laborers lost their homes and belongings in the quakes, Mishra says.

Many of these workers and their families now live in makeshift accommodations in Tundikhel or other open grounds, Mishra says.

The 185 tents in Tundikhel house nearly 600 families, according to the Nepalese Army, which manages the camp.

Mishra found that many of the laborers have also lost houses and other assets in their home villages.

“The laborers’ houses in villages are fully destroyed by the earthquake, and whatever land they owned is ruined by landslides,” he says. “They do not have a place to live in the city as well. These laborers have nowhere to go. They are living a very difficult life.”

Life has indeed become difficult for day laborers like Rajendra Thapa Magar, 35, and his wife Kamala, 22, who worked at construction sites in Lalitpur and Bhaktapur.

The April earthquake had no impact on the rented room where they lived in the Old Baneshwor area of Kathmandu with their 3-month-old son.

But the May earthquake caused severe damage, forcing them to move out.

They stayed at a friend’s house for a few days and then moved to Tundikhel grounds. Thapa Magar’s wife and son stay in a tent set up by a nongovernmental organization; Thapa Magar lives outside the tents with other men.

He has no money at all, he says.

The couple’s son is sick from the cold weather, he says. He does not know when they will be able to live inside a warm house again.

“The only house that I had in my village has also collapsed,” he says, referring to his family home in Kavre district. “I had never imagined that this day would come in my life.”

He has been unable to find work in the Kathmandu Valley, Thapa Magar says. There are no construction sites, and none of his previous employers has any work for him.

He says he is prepared to do any work he can to survive.

But construction workers may not find employment for five or six months, estimates Sambar Sing Tamang, a private building contractor and a member of the General Federation of Nepalese Trade Unions.

“People are frightened by the earthquake,” he says. “Therefore, in the private sector, people are not in the mind-set to construct new buildings. Aftershocks are hitting us continuously. At present, it is not favorable to work or make others work.”

In addition, private builders are confused about the new building regulations and don’t know how to make existing buildings quake-resistant, Tamang says.

When construction starts up in July, there will be plenty of employment opportunities, says Subit Shrestha, chairperson of the central region of the Federation of Contractors’ Associations of Nepal, an umbrella organization of Nepalese contractors.

“But the repeated aftershocks have prevented us from working,” he says. “As we have to consider the safety of the workers as well, there is no other alternative to holding on to our patience in this situation.”

Because the government halted construction without considering the needs of the laborers, it should provide them with food and clothes, he says.

But government officials say the construction moratorium was necessary.

The government has learned from the earthquakes and is modifying construction laws accordingly, says Shyam Raj Adhikari, undersecretary of the Municipality and Environment Management Division at the Ministry of Federal Affairs and Local Development.

Earthquake-resistant buildings of up to two stories are allowed, but all other construction work is banned until mid-July, the end of the fiscal year. Minor repairs to damaged buildings can be undertaken after approval is obtained from local government authorities.

Three national laws – the Building Act of 1998, the Building Rule of 2009 and the Building Construction Directive of 2004 – are under review, says Padma Kumar Mainalee, spokesperson and joint secretary of the Ministry of Urban Development.

Officials are discussing construction requirements while considering locations, cultures and ethnicities, he says.

The Central Union of Painters, Plumbers, Electro and Construction Workers Nepal has provided large tents in 20 places in Kathmandu and Lalitpur. It also has given food to families of injured workers.

The union is appealing to the government to provide for day laborers and their families, union President Naranath Luitel says.

“We are making the government aware about the need for food, shelter and clothes,” he says. “We have not called for a strike. We will put forward our demand in a cordial manner.”

For day laborers like Niraula, the future appears bleak. She is eager to return to work so she can support her family again.

“How can we run our lives with the alms?” she asks. “I feel ashamed to stand in a queue to receive food when my limbs are intact and I can work.”