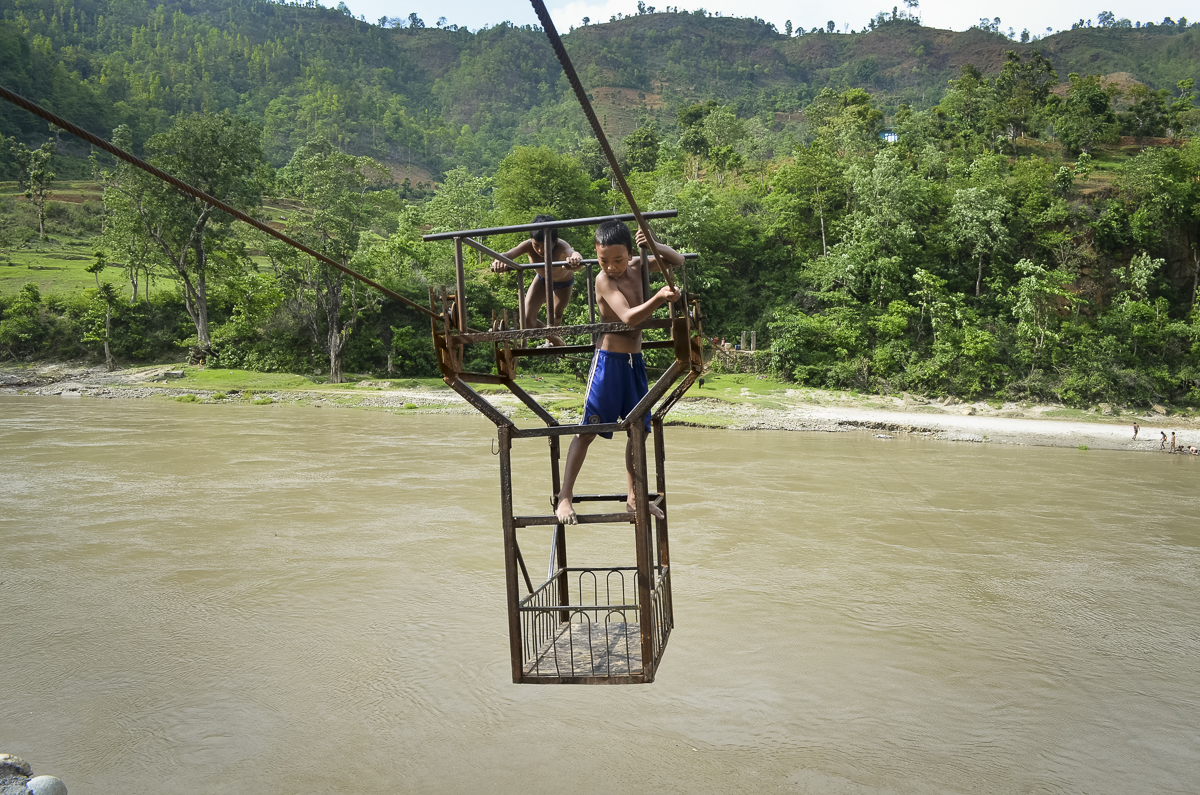 KUMPUR, NEPAL — Yadav Prasad Panta, 29, and his nephew Ajit Panta load sacks stuffed with bitter gourds onto a small metal trolley. They step onto that trolley and, using a 155-meter (508-foot) system of rope and a metal pulley, move the trolley across a river that flows about 16 feet below.

The system is a local one known as a tuin, and it’s the only way the two men can cross the Trishuli River. On many days, they must make the dangerous trek three times to move their 100-kilo (220-pound) vegetable harvest to market.

“Getting the vegetables to market without a good bridge has become more difficult than farming,” Panta says.

INSIDE THE STORY: Despite fears, a reporter uses a rope-and-pulley tuin for the first time ─ and gets stuck halfway across. But a local laborer saves the day in a place where, as one villager puts it, life “languishes in darkness” without a bridge. Read the blog.

However, Panta and the other 3,000 or so people who reside in Kumpur hope their lives will be transformed when a new bridge, currently under construction, is completed. Work began in May 2016 and is expected to be finished by the end of October. Once done, the bridge will connect Kumpur VDC and Gajuri VDC. (VDC refers to village development committee, an administrative designation.)

Panta is already making plans to expand his farm. With the bridge, he’ll have an easy way to transport his produce.

Tuins are a common river-crossing method in Nepal. They’re a dangerous mode of transport, but the communities that rely on them would be isolated if they didn’t use them. Some tuins, like the one near Panta’s village, include a box or cart in which people ride. Others include rope loops attached to pulleys, and people, including children, balance on the loops, feet dangling below them, to pull themselves across.

Getting the vegetables to market without a good bridge has become more difficult than farming. Yadav Prasad Panta, a farmer who struggles to sell his produce because there’s no road access to his village

Soon, though, those tuins will all be gone. K.P. Sharma Oli, who was Nepal’s prime minister until he resigned in July, and his cabinet promised in October 2015 to replace the pulley systems. The decision was one of the first the cabinet made in its initial meeting with the newly elected leader, says Kumar Thapa, chief of the Suspension Bridge Division of the Ministry of Federal Affairs and Local Development.

At that point, the government didn’t even know the number of tuins in Nepal’s 75 districts, Thapa says. After a period of information gathering, the government determined that there are 237 temporary bridges in 43 districts, including 155 tuins that will be replaced with permanent suspension bridges.

There are 6,477 permanent bridges of various types in Nepal, but an estimated 6,000 more are required, according to government records, says Amrit Kumar Shrestha, chief of the Local Bridge Section of the Ministry of Federal Affairs and Local Development.

Dhading district, where Yadav Prasad Panta lives, is home to 336,067 people, according to the 2011 census.

Work is under way to build 10 suspension bridges in the district, says Bhola Prasad Gautam, an information officer at the District Development Committee of Dhading. All of those bridges are scheduled for completion within two years, he says.

Uddhab Kumar Khatiwada, an engineer at the District Development Committee in Dhading district, cautions that a two-year time frame is likely unrealistic.

“The government’s target to replace all tuins within two years is very good, but the decision does not mean the construction of suspension bridges will be completed by the stipulated time frame,” he says. “It will take three to four years.” 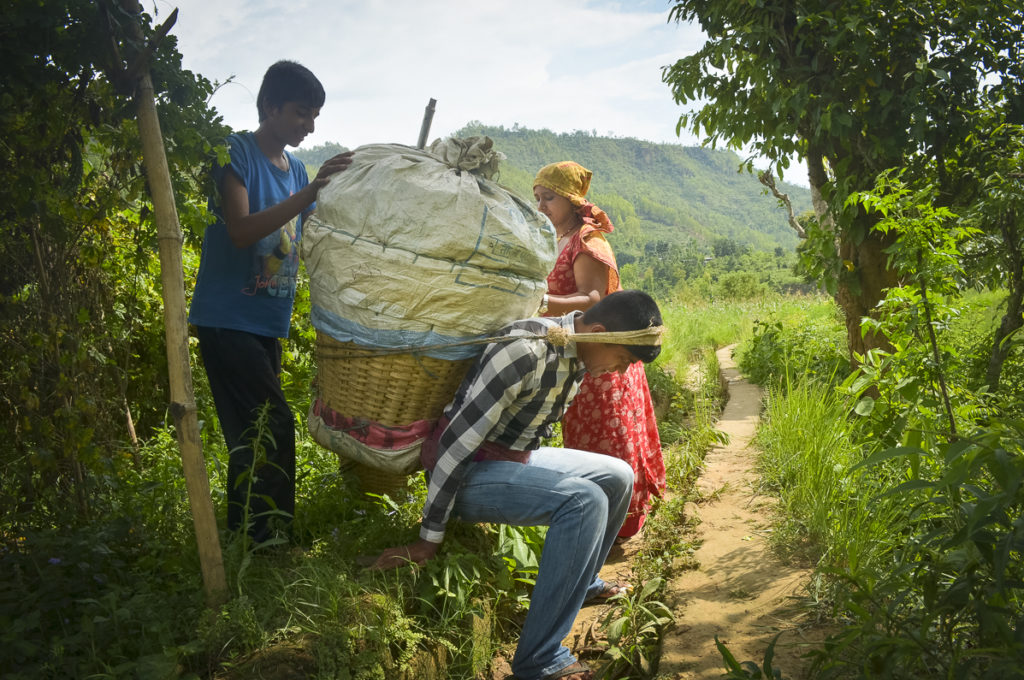 Yadav Prasad Panta, 29, crouches so his nephew, Ajit Panta, 15, can adjust his pack of vegetables. The pair prepared to carry the vegetables in a tuin, a rope and pulley system, across the Trishuli River to sell them at a market. 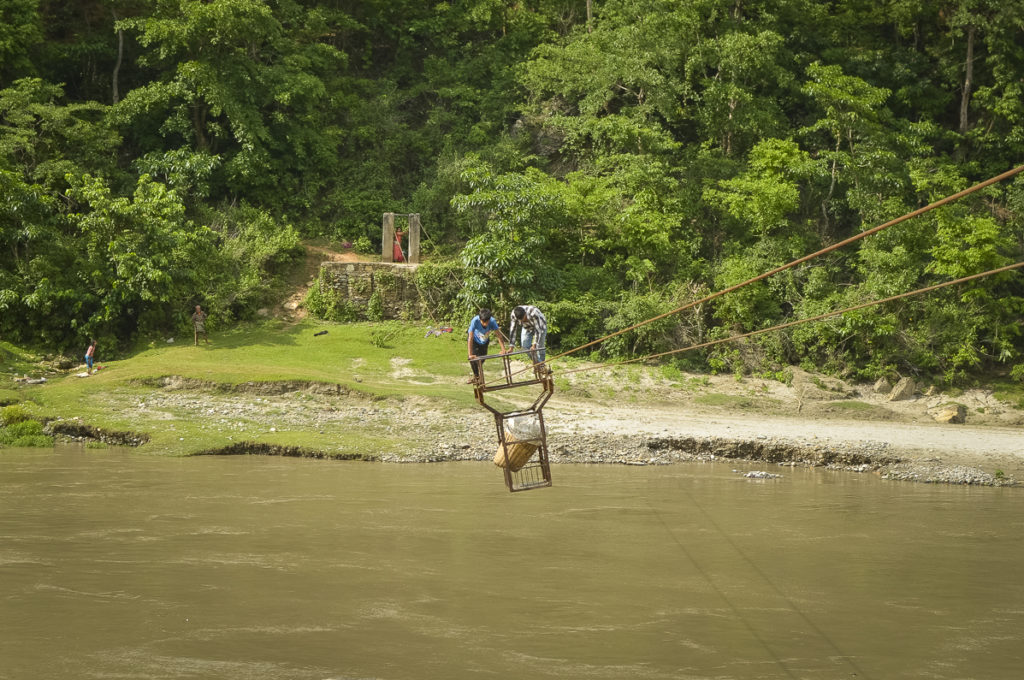 Yadav Prasad Pant and Ajit Pant use the tuin to cross the Trishuli River in Nepal’s Dhading district. The government plans to erect a suspension bridge across the river, which will dramatically ease the efforts the two must make to get vegetables to a market. 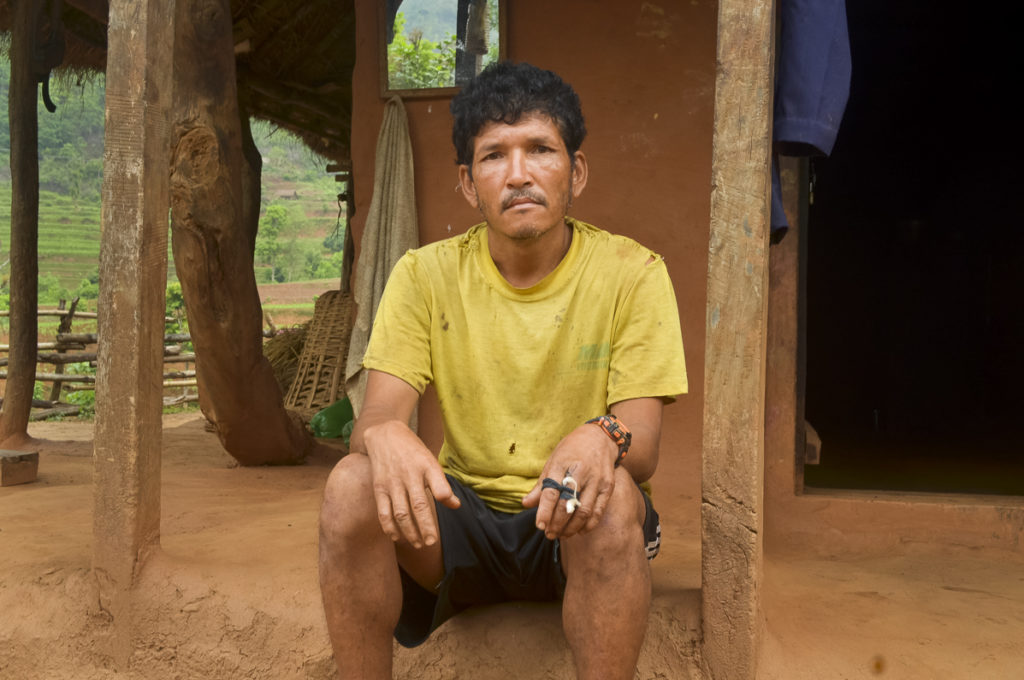 Jit Bahadur Sharki, 43, shows his finger that was chopped off in an accident involving the tuin. Villagers say more than 60 people have been injured at their tuin crossing. 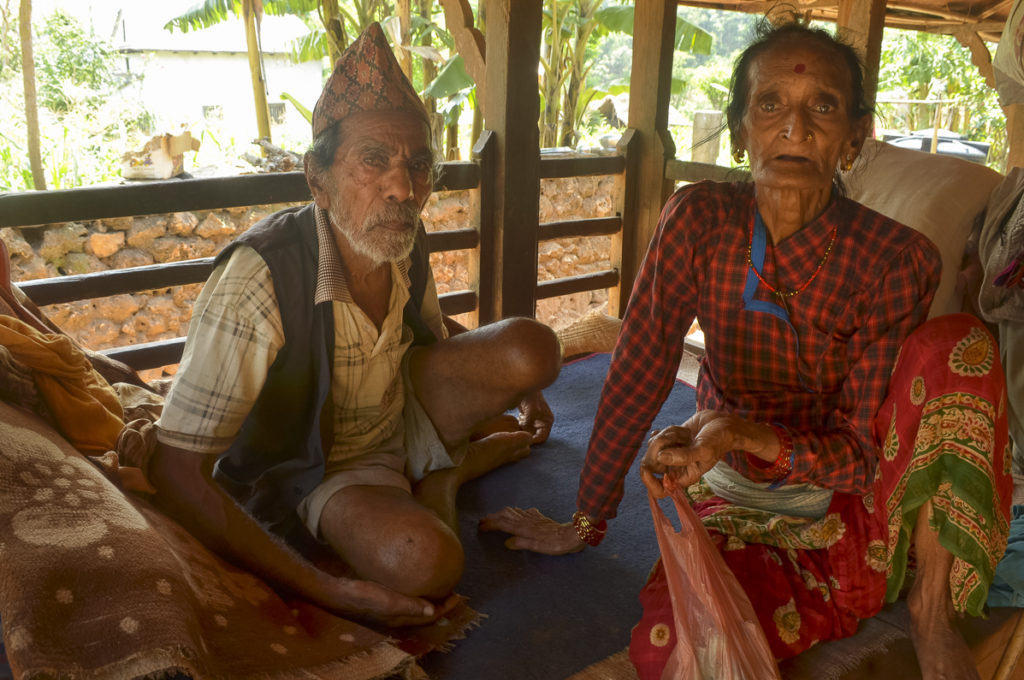 Balabhadra Pandey, 86, shown sitting with his wife, Thuli Kanchi Pandy, 70, hasn’t been able to walk or move properly for the past two years. He says he hasn’t visited a hospital because he cannot use the tuin to cross the Trishuli River. 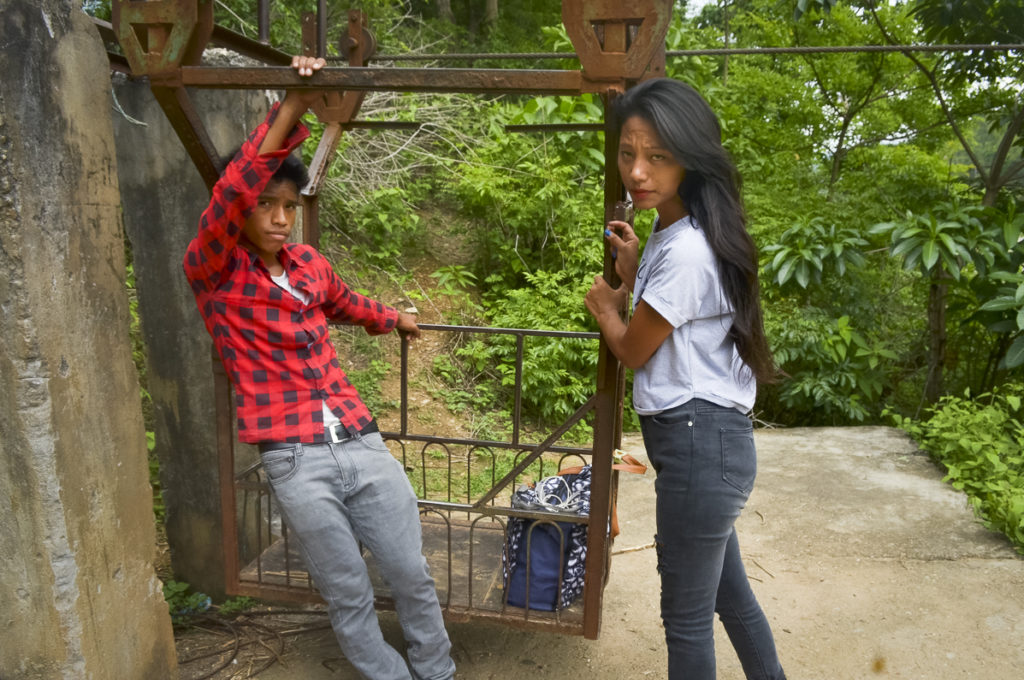 Siblings Puja Magar, 19, and Om Magar, 18, cross the tuin near Kumpur, a village in Dhading district. 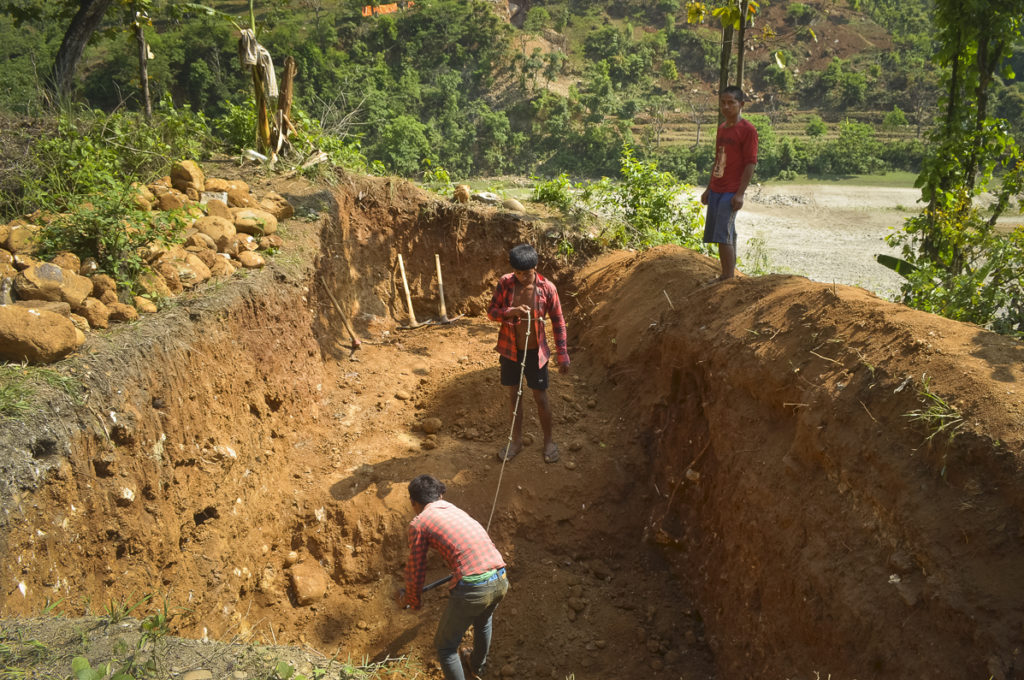 Laborers dig to prepare the land for a bridge, scheduled to be built at Kumpur, an isolated village in Dhading district. The bridge, which will replace the tuin, is scheduled for completion by October.

He estimates that Dhading would be a tuin-free district within four years, provided that the funds are remitted to the district on time and the work moves ahead according to plan.

Agriculture is the main occupation for most people, Khatiwada says. The areas bordering the Trishuli River, called the Trishuli corridor, are popular for vegetable production.

There are 10 tuins across the Trishuli River in Dhading district, Khatiwada says.

All 10 of those tuins are scheduled for replacement.

The tuin connecting Kumpur and Gajuri VDCs was installed in 2005, Panta says.

Crossing it can be dangerous. Local people say more than 60 people in Kumpur village live with injuries caused by accidents on the tuin. It’s common for body parts to get snagged in the wires, Panta says.

“Some of them don’t have their hand, some do not have fingers, some have scalp injuries, and some have broken their spine after falling from the cable bridge,” he says.

“Some time, I have difficulty in breathing,” Pandy says. “I want to go to hospital, but what can I do when I cannot cross the tuin?”

Some time, I have difficulty in breathing. I want to go to hospital, but what can I do when I cannot cross the tuin?Balabhadra Pandy, 86, who lives in a village that is only accessible via tuin

About 80 percent of Nepal’s population lives in rural areas and depends on subsistence farming, according to the Rural Poverty Portal, which is part of the International Fund for Agricultural Development, a UN agency.

Panta’s farming efforts have grown beyond subsistence. He owns one of the largest vegetable farms in Kumpur, with around 8 ropani (0.4 hectares or one acre) of land where he grows various gourds, including pumpkins, from April to September.

He would earn even more, he says, if he had better access to the main road across the river.

“The market for the vegetables I produce is in Kathmandu,” he says. “There is a highway right at the end of the tuin, and the bus takes my vegetables to Kathmandu from there.”

The trip from the end of the tuin to Kathmandu takes five to six hours.

The family’s work could grow into a fully formed business and employ people once the village is connected to the main road, he says. That’s when he plans to begin farming throughout the year. And, he says, living conditions overall will improve.

“After the bridge is built, we will establish direct connection of the village with the highway and the rest of the country,” he says.