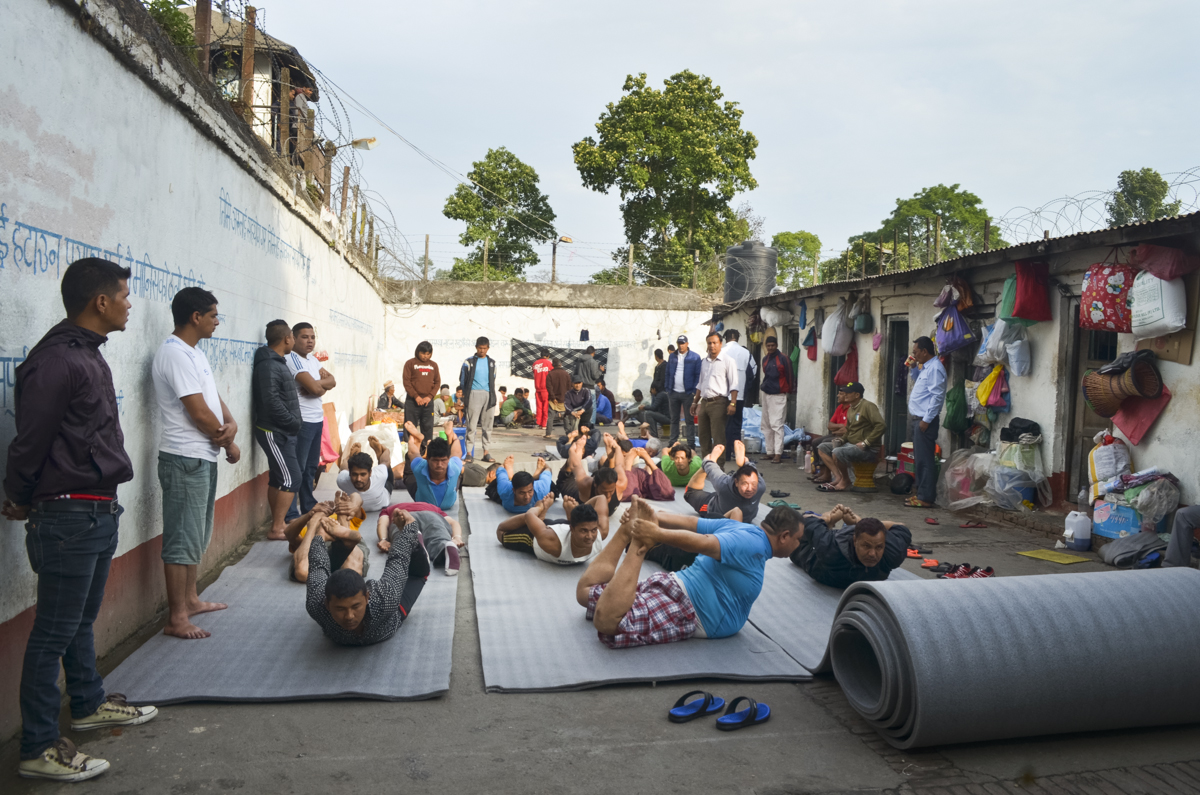 DHULIKHEL, NEPAL — Purna Bahadur Pradhan is the officer in charge of security at Kavre District Prison in Dhulikhel in Kavrepalanchok district, commonly known as Kavre, in Nepal.

But Pradhan, 46, goes into the prison only twice a day, at 6 a.m. and 6 p.m., to supervise the security and operations.

There are only 12 guards, all from the Nepal Police, to ensure the security of 233 inmates at Kavre District Prison.

Pradhan says the prison is easily controlled because of inmates who serve as Naike, a word that in Nepali means “leader” or “leaders.”

INSIDE THE STORY:  A Global Press reporter went alone to a prison in Nepal and discovered a welcoming community. Read the blog.

The Naike system is created by prisoners themselves. In a facility built to house 60 prisoners, but which in reality holds nearly four times that number, Naike organize routines and activities. There are singing and dancing ceremonies each morning and evening and special tasks for people with unique qualifications. Naike even collect funds and buy food. The prison is clean and peaceful.

Naike are the secret to the prison’s success, Pradhan says.

“It would have been very difficult for us if there was not an internal administration of prisoners inside the prison,” Pradhan says. 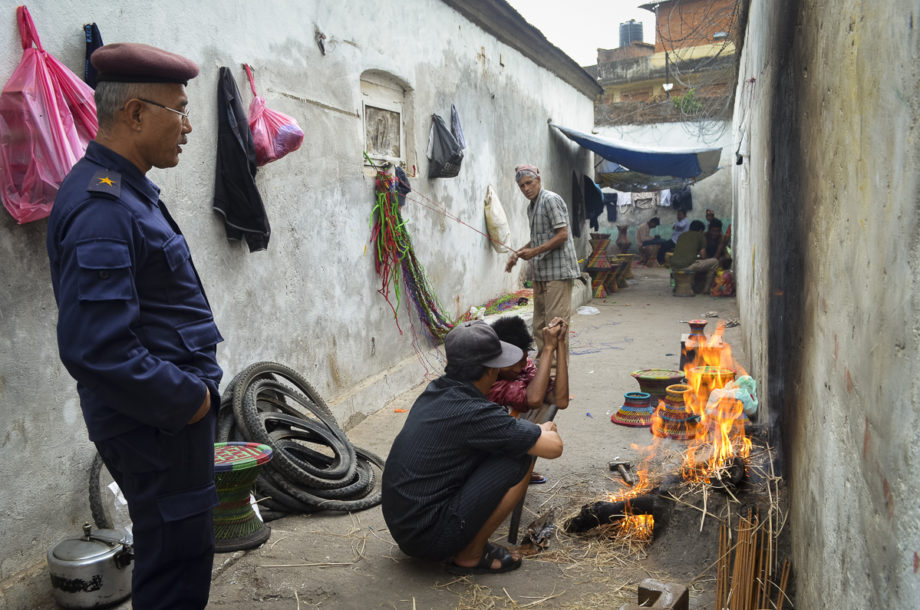 Purna Bahadur Pradhan, 46, the police officer in charge of security at the prison, watches two prisoners cook. The officer visits the prison twice a day to monitor activities there.

The limited number of prison guards could not control the prisoners without this system, he says. As it is, the police officers patrol the prison from the outside, and rarely come inside, Pradhan says. They focus on ensuring that no one escapes and that supplies are delivered.

The system of administration using leaders selected from among prisoners themselves was introduced in the early 20th century, when the prison system was established in Nepal. The system allows prison authorities to manage inmates with comparatively few guards.

Nepal first began incarcerating people in a formal prison system in 1914, says Devi Prasad Subedi, a director in the Department of Prison Management. The system of prisoner-appointed leaders was established at the same time, he says.

Nepal has 74 prisons and three juvenile detention centers, which house a total of 17,905 inmates, not including foreign inmates, according to April 2016 numbers.

Nepal’s Prison Act 1963 allows the jailer or officer in charge of each prison to appoint leaders and deputy leaders from among the prisoner population. The act recommends that one leader be appointed for every 25 prisoners and one deputy leader for every 10 prisoners.

Those leaders are eligible for significant benefits. A prisoner who serves as a Chaukidar, the prison’s main leader, gets a two-month reduction in his sentence for every year he does the job, Subedi says. A leader gets 1.5 months reduced from his sentence, and a deputy leader gets one month.

A prisoner is selected as a deputy leader after completing two years of his sentence and after his good behavior and natural leadership skills have earned the trust of the prison management and other prisoners, says Mahesh Pokharel, the officer in charge of Kavre District Prison. 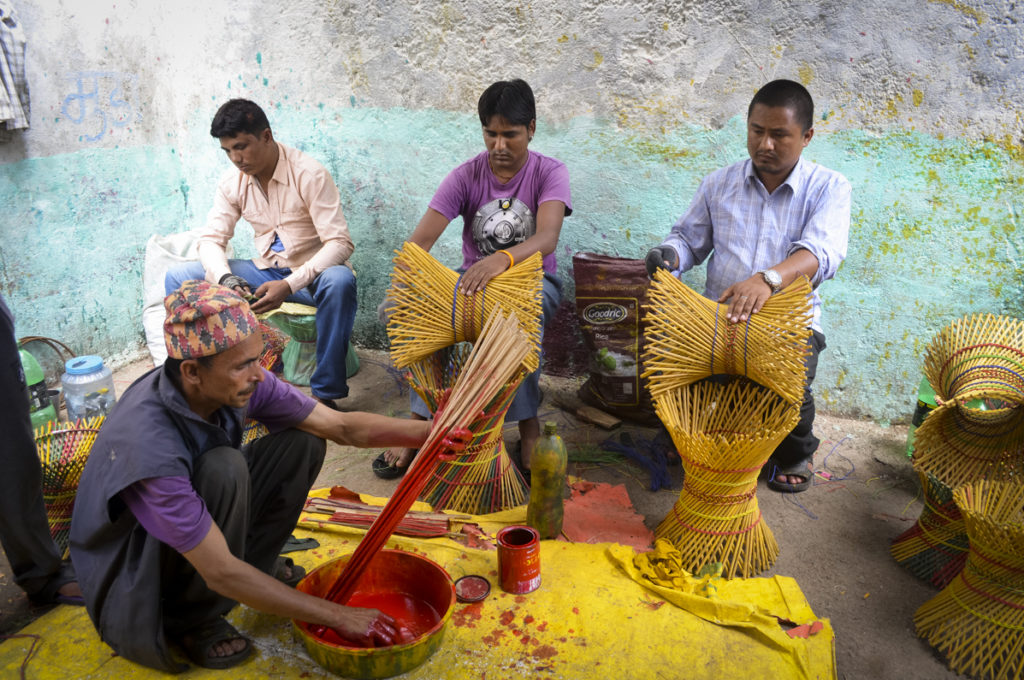 Prisoners make stools at Kavre District Prison. The craft is one of three income-generating activities at the prison. The others are making quilts and making small temples used as shrines in homes. 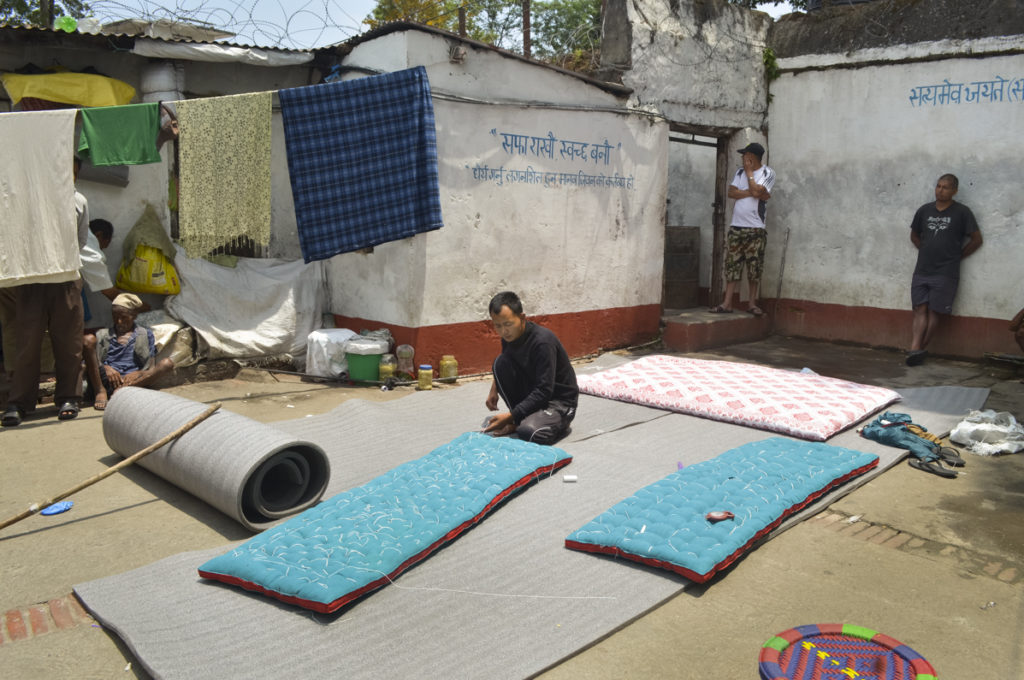 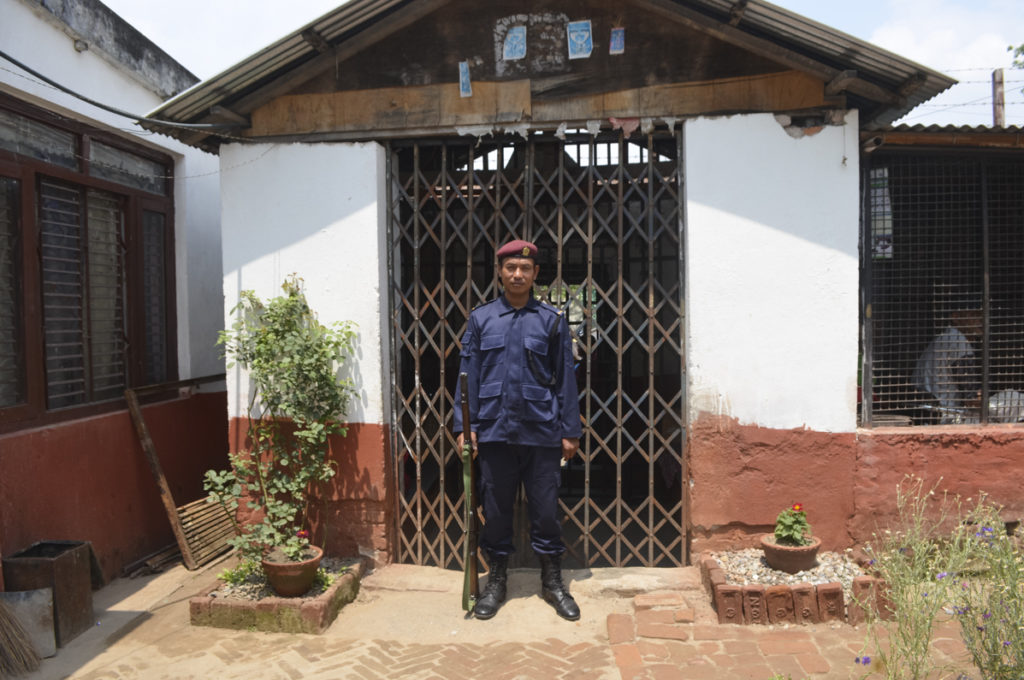 Ram Kumar Shrestha, 34, stands guard at Kavre District Prison. One of 12 security officers at the prison, he stands at the gate for four hours in the day shift and four hours during the night to monitor prisoners and their visitors. 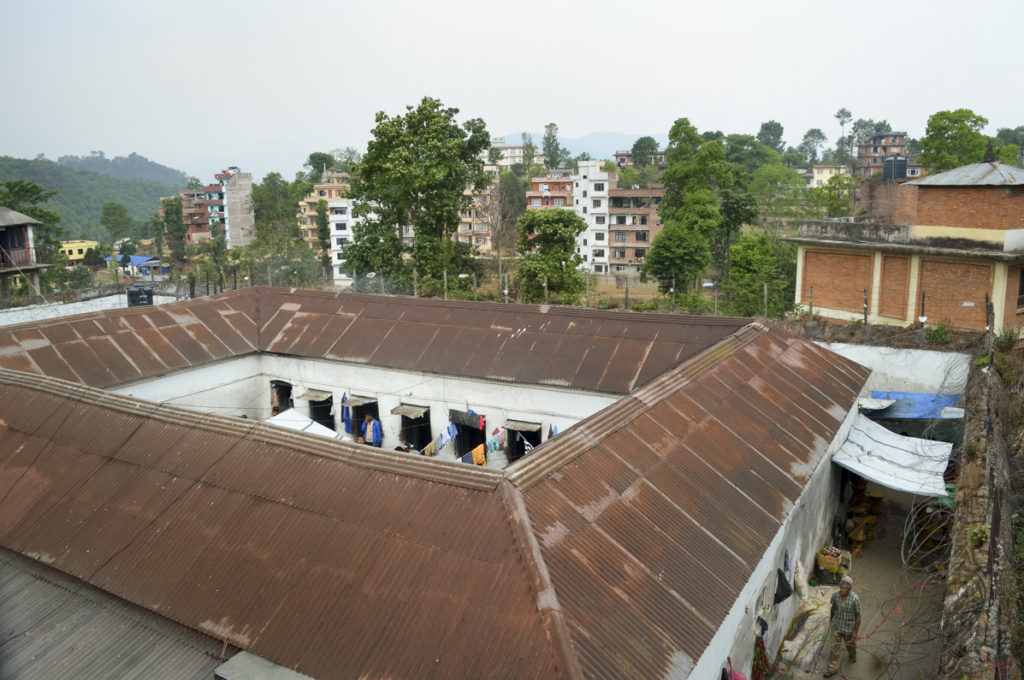 Kavre District Prison is in Dhulikhel, the main town in Kavrepalanchok district. It sits among homes and businesses. 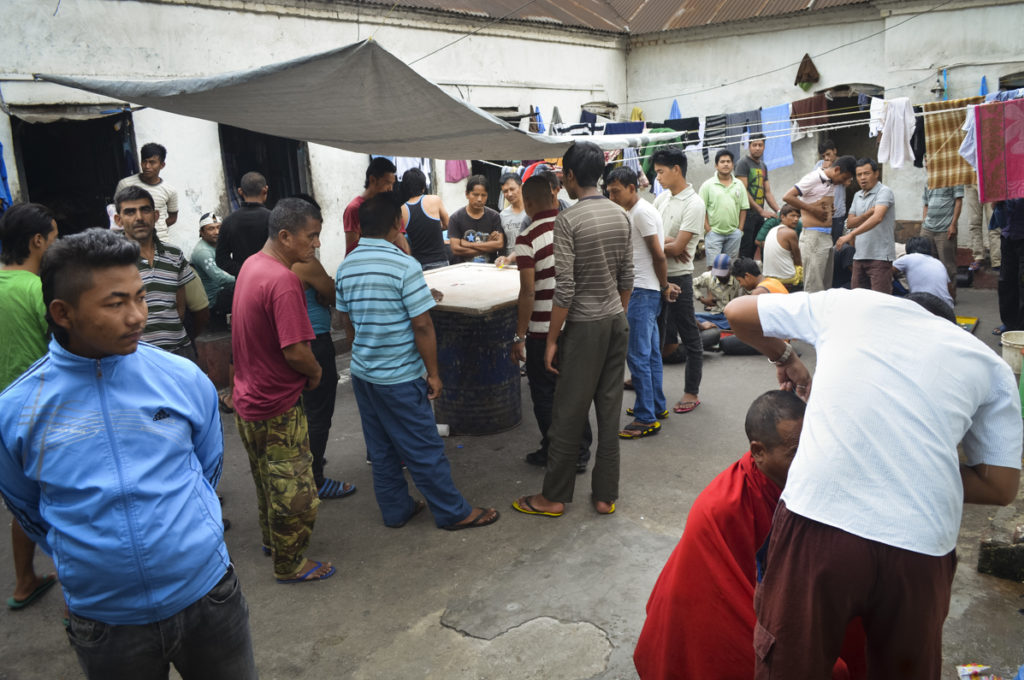 Prisoners congregate in the courtyard at Kavre District Prison, which holds 233 inmates. 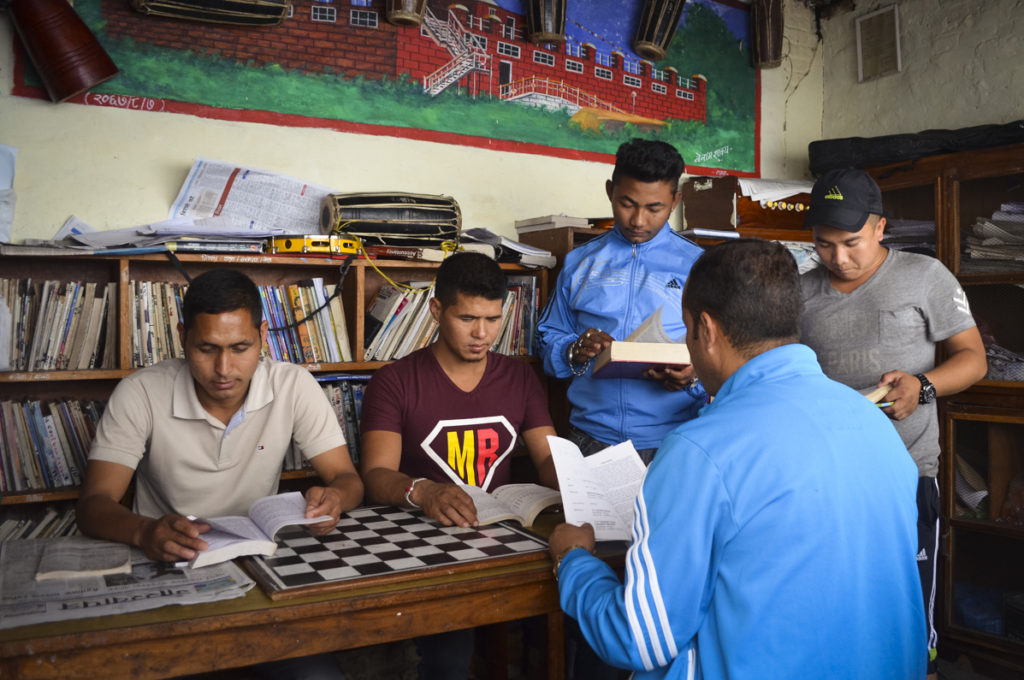 Kavre District Prison’s small library is popular among prisoners, who spend time there reading, playing board games and studying for exams. 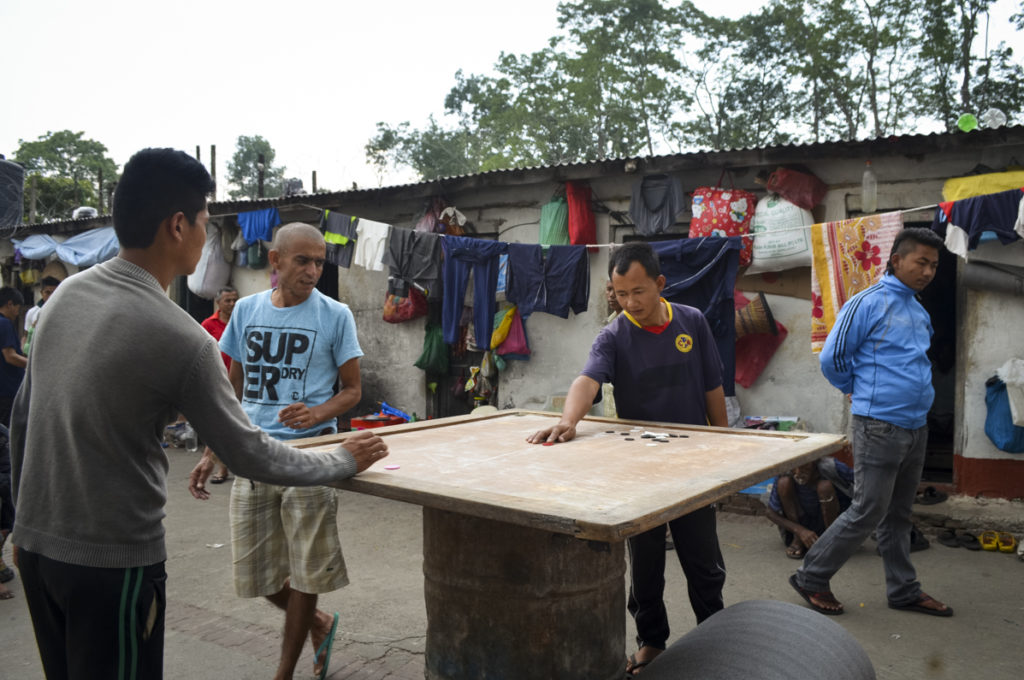 Shanta Lama, in dark blue shirt with yellow emblem, plays carrom, a board game in the courtyard at Kavre District Prison. 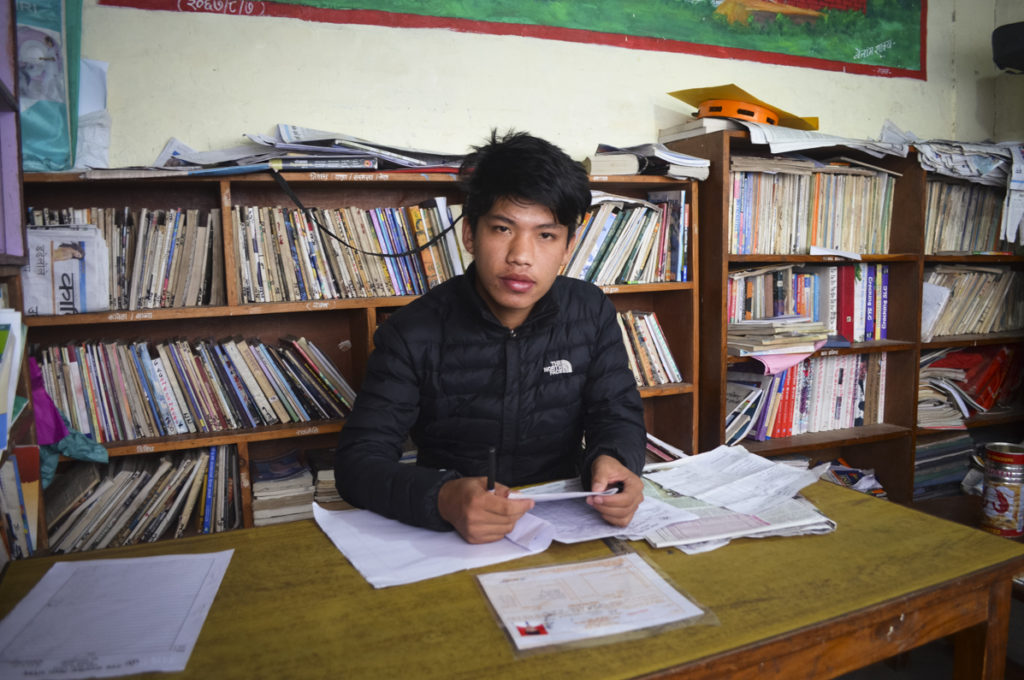 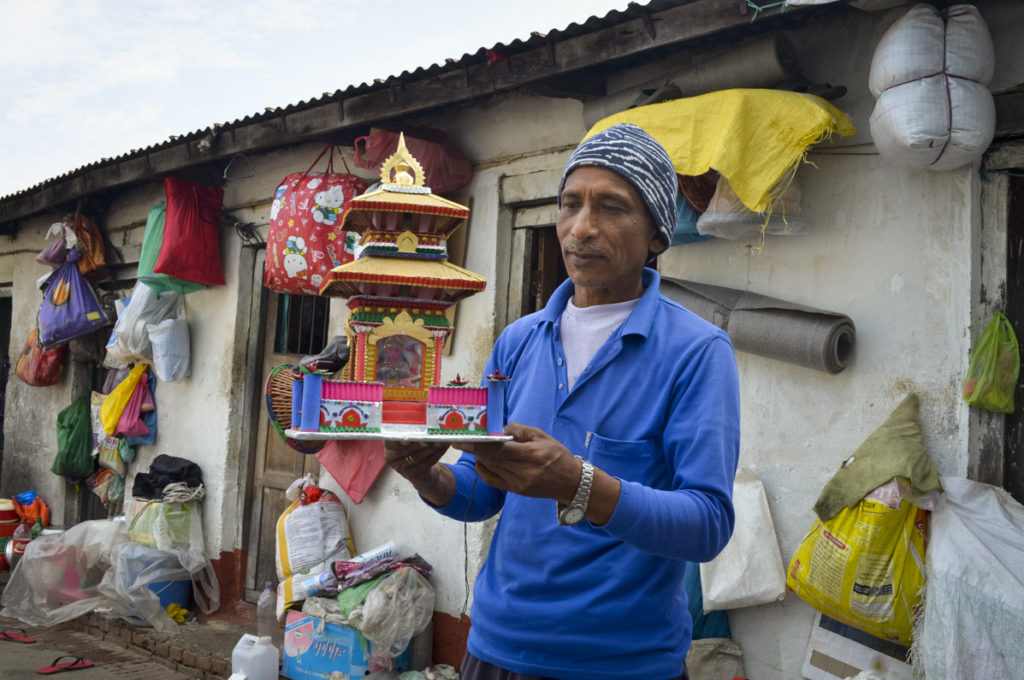 A prisoner displays a small temple made by him and other prisoners. Prisoners sell the temples, which are used as shrines inside homes. 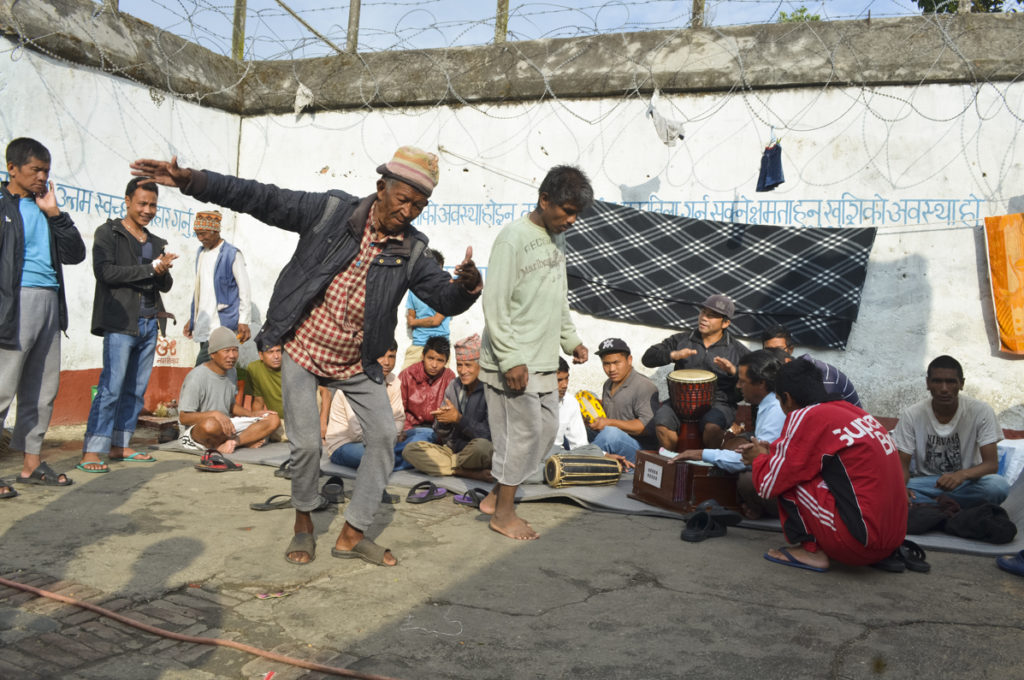 Prisoners dance and sing in the compound each morning within Kavre District Prison. Instruments are donated, and prisoners take turns playing them and singing. Prison officials say this type of activity helps prisoners manage depression.

Other prisoners participate in prison administration by serving as teachers, trainers and bookkeepers and by performing other administrative tasks, but it’s the leaders who are key to the system’s success, Subedi says.

Pokharel says the prison’s numbers swelled in 2015 from around 100, after inmates from Sindhupalchowk and Dolakha were moved to Kavre when prisons in those districts were damaged by last year’s earthquake.

The 233 prisoners range in age from 17 to 90 and are serving sentences for murder, rape, drug possession and robbery, among other crimes, Pokharel says.

The team of 24 leaders ensures the internal administration system of Kavre District Prison functions smoothly in spite of the increase in numbers, Pokharel says. This team comprises a Chaukidar who reports to Pokharel and Pradhan, eight leaders and 15 deputy leaders.

The leaders also manage prisoner relationships and minimize disputes, Pokharel says. Prisoners’ use of phones, as well as income from the sale of items prisoners make in vocational workshops, are overseen by the leaders.

Pradhan says the main leader provides him with an update during each of his twice-daily visits, ensuring that he is informed of all that is happening within the prison.

Arjun Thapa Magar has been the Chaukidar, or main leader, at Kavre District Prison since July 2015.

“I have been taking care of food, shelter, clothes and everything that is needed for the prisoners,” he says.

Magar, 30, says he has created an effective leadership system in the prison.

“In a way an army major mobilizes soldiers, I also deputize leaders here for duty,” he says. “We create a community inside the prison.” 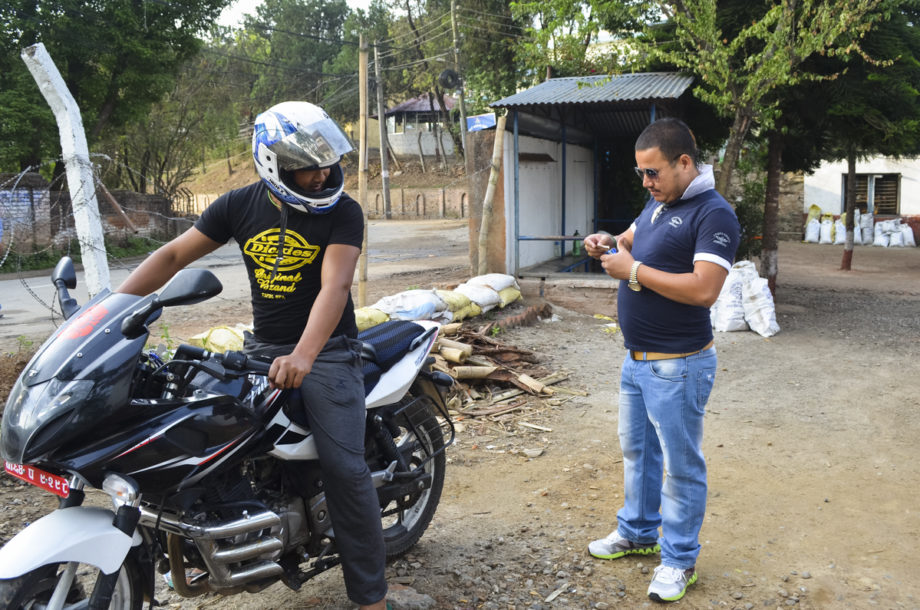 Arjun Thapa Magar, 30, (standing) is the Chaukidar, or main leader, at Kavre District Prison. He is shown here with a police constable, on motorcycle.

The Nuwakot district native organizes prisoners by age and interest. For example, those who do yoga might form one group, while musicians might form another. Magar also assigns duties to prisoners, such as cleaning and cooking. Prisoners pool 45 Nepalese rupees (42 cents), a day’s allowance they are given for food, and Magar says he, with a police officer, buys the provisions. Magar shares this task with one or two other trusted leaders.

Magar has frequent meetings with prisoners to find out what their needs are and to determine if any disputes are simmering.

“Based on what the prisoners tell me, I give all reports to the prison officer in charge,” he says.

Around 30 prisoners have been diagnosed with mental illnesses, including depression, he says. Magar says he and his team of leaders pay special attention to these prisoners, and sometimes enact a suicide watch in a 24/7 cycle. They care for them as they would a family member, helping them with bathing and shaving and monitoring their medication intake.

“Whatever the basic needs of the prisoners inside the prison, I will fulfill it as my responsibility,” Magar says.

The prisoners do everything together, he says, including cooking, cleaning and leisure activities.

“There is no possibility of altercations in the prison, since the prisoners are working and living in groups,” he says. 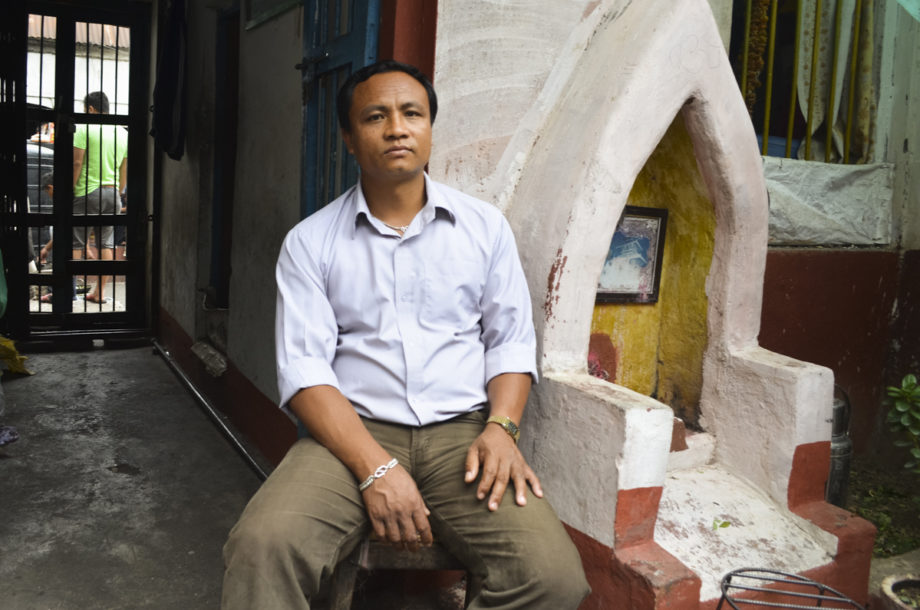 Dipak Thakuri, 38, is one of eight leaders at Kavre District Prison.

Convicted of murder, Thakuri began a 20-year prison sentence in 2008. He was appointed a leader in 2014, after serving four years as a deputy leader.

Being a leader in prison has made him aware of people’s needs, Thakuri says. He says he hopes to work in the social services sector when he is released.

Shanta Lama, 30, says Kavre District Prison would be “a mess” if leaders weren’t allowed to manage it.

Lama quilts at the prison, a skill he learned by watching other prisoners. Now, he earns 200 rupees ($1.86) a day for his work, he says. There are other vocational options too, but for all of them, the leaders create work schedules and allow time off for leisure activities, such as sports, listening to music or talking, Lama says. 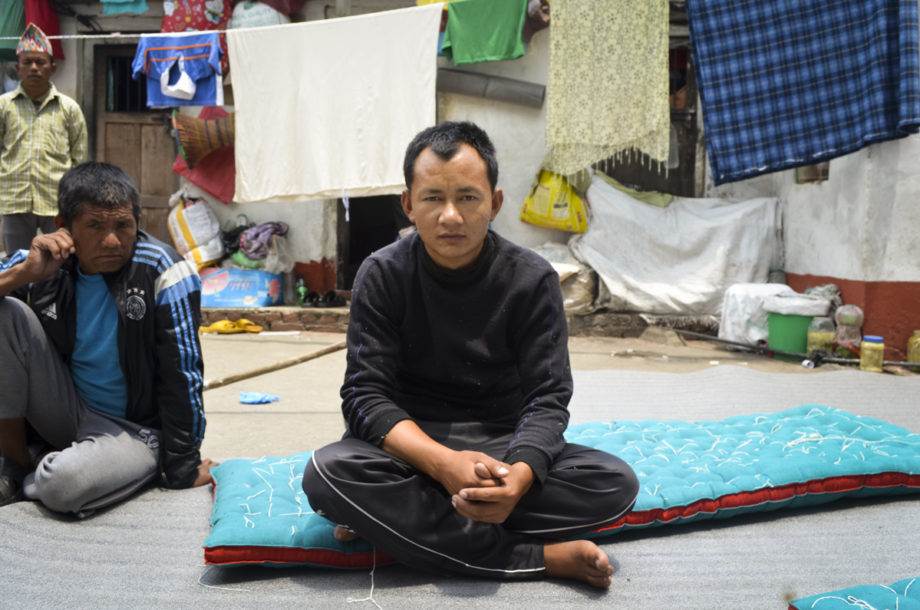 Shanta Lama, 30, an inmate at Kavre District Prison, says the facility would be “a mess” were it not for the prisoner leaders.

Lama was sentenced to 11 years in prison in 2009 for robbery. He likens the prison’s atmosphere to that of a family. Leaders ask about prisoners’ needs and they talk about their plans and tasks for the day.

Lama says he feels secure in the prison because of the leaders and the communal environment.

“Nobody should be afraid here,” he says.

Suraj Thapa, a deputy leader, is the in-house medical expert and bookkeeper at Kavre District Prison.

He says he had no prior experience in bookkeeping, but other prisoners saw him as educated and therefore qualified. 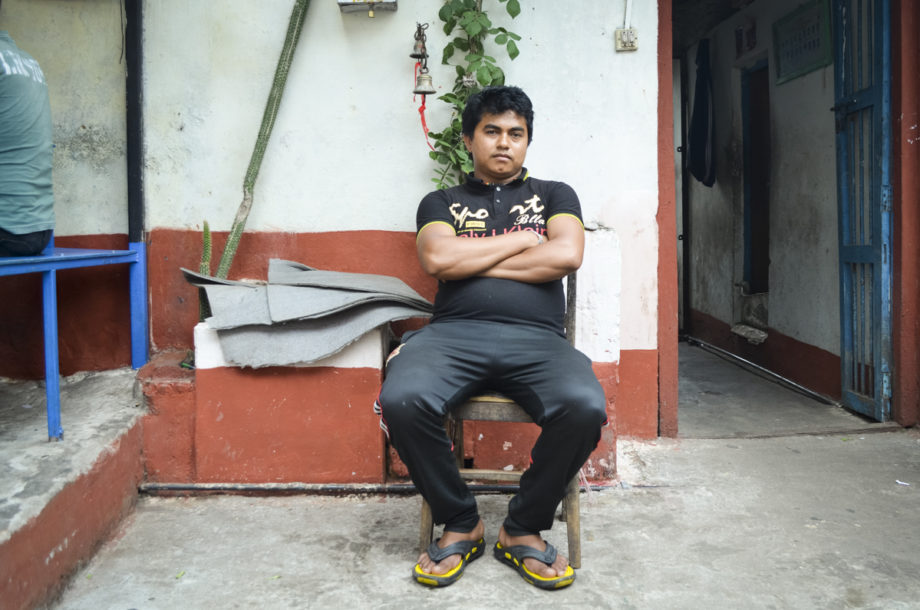 Suraj Thapa, 24, is a deputy leader at Kavre District Prison.

Thapa, 24, tracks the cost of materials and the income from sales of stools, quilts and other items made in the prison. He has a monthly meeting with all workers at which the month’s income is revealed, and monthly earnings are distributed in cash.

Thapa studied nursing before he entered prison. This knowledge has helped him prescribe medicine for prisoners suffering from minor ailments like colds, headaches, coughs or fever, he says.