Skip to main content
The story you are reading was published on Wednesday November 2, 2016. To read more recent stories click here. 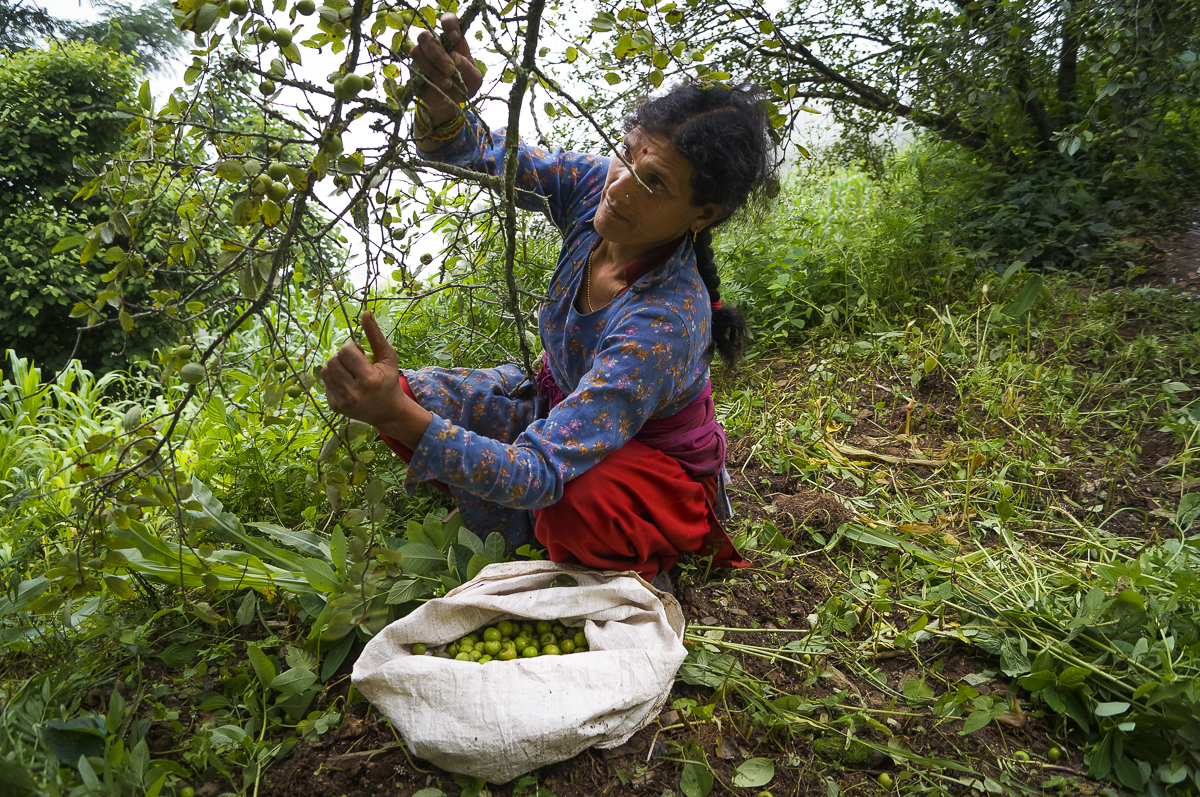 THULO PARSEL, NEPAL — It’s early evening when Ajay Lama and his wife leave their home to spend the night guarding four trees in a neighbor’s garden.

They live in Thulo Parsel, a remote village in the Kavrepalanchowk district east of Kathmandu. The village is nestled in the mountains and, during monsoon season, is often covered in a soft mist. It is here in the Timal region where a specific type of Bodhichitta trees grow. The seeds of the fruit from this tree, which are larger here than in other areas of Nepal and a warm brown color, are dried and made into beads. They are then used in a 108-bead chain that aids Buddhists in chanting and meditation.

INSIDE THE STORY: A terrifying bus ride turns idyllic as a Global Press reporter travels to a region known for its Bodhichitta trees, from which come seeds that are used as beads in prayer chains. Read the blog.

Lama, 35, says the beads from this region became popular in 2011 after the Dalai Lama, the spiritual leader of the Tibetan people, praised their quality and encouraged people to use the bead chains in meditation.

This year, Lama leased four trees from his neighbor, 50-year-old Devaki Mainali. Lama and another villager paid Mainali 300,000 Nepalese rupees (about $2,800) for each tree and its fruits for the season, and they will share the profit from the sale of the beads.

The size, shape and natural markings on the beads determine their price, Lama says. Smaller beads with clear markings are the most valued. A chain of the best beads can fetch half a million rupees (about $4,700), he says.

Between May and late July, during the harvest season, Lama and his wife slept near the trees each night to guard them from thieves. Increasingly, ripe Bodhichitta fruit is stolen from trees, he says.

“For Buddhists who count mantras from the chain, it is a tree of Bodhichitta beads,” he says. “For us, it is a tree where money grows. Who would not steal money if it is kept outside?”

Life for villagers in Singata and the rest of the Timal area has improved dramatically since 2011, when traders from Kathmandu, as well as India and China, began to visit the village each year between April and August. Some even make elaborate plans to transport their purchased beads in secret because they fear being robbed.

The high price of Bodhichitta beads is a recent phenomenon. Until around 1998, the beads didn’t cost anything, says Sonam Lama, an 83-year-old Buddhist monk who lives in the Timal area.

Legend has it that Buddha lost two Bodhichitta beads out of 109 when he was counting prayers, Sonam Lama says. Later, Buddha found one of the beads that he had lost, but the chain snapped again and beads were scattered around. The Bodhichitta trees started to grow after he sowed those beads in the village and blessed them. 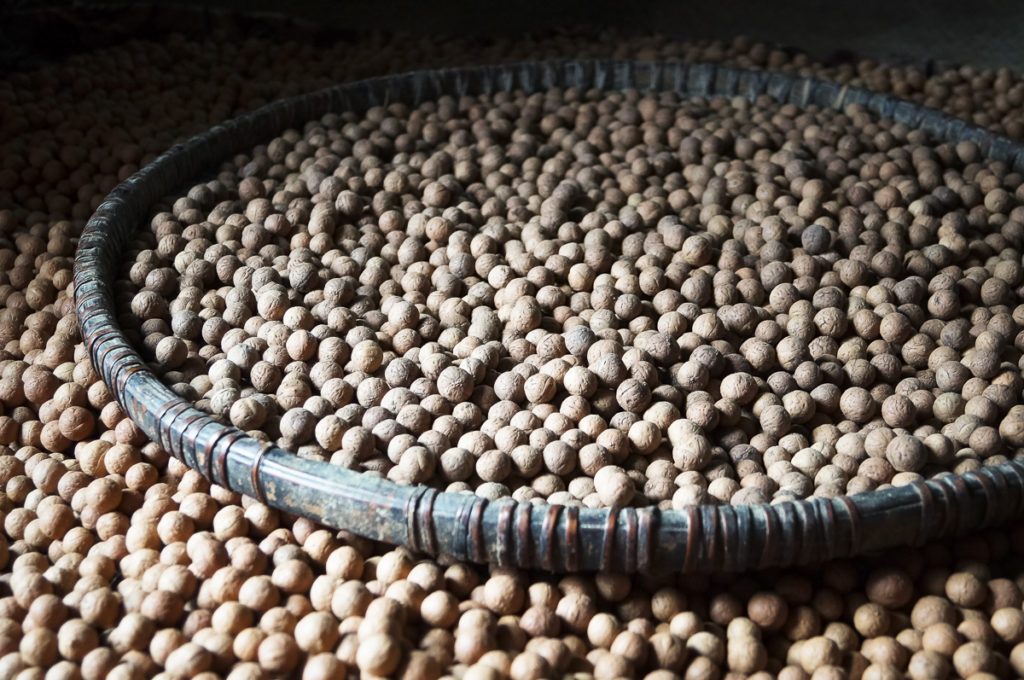 The Bodhichitta beads produced in Nepal’s Timal region are favored for their size and warm brown color. 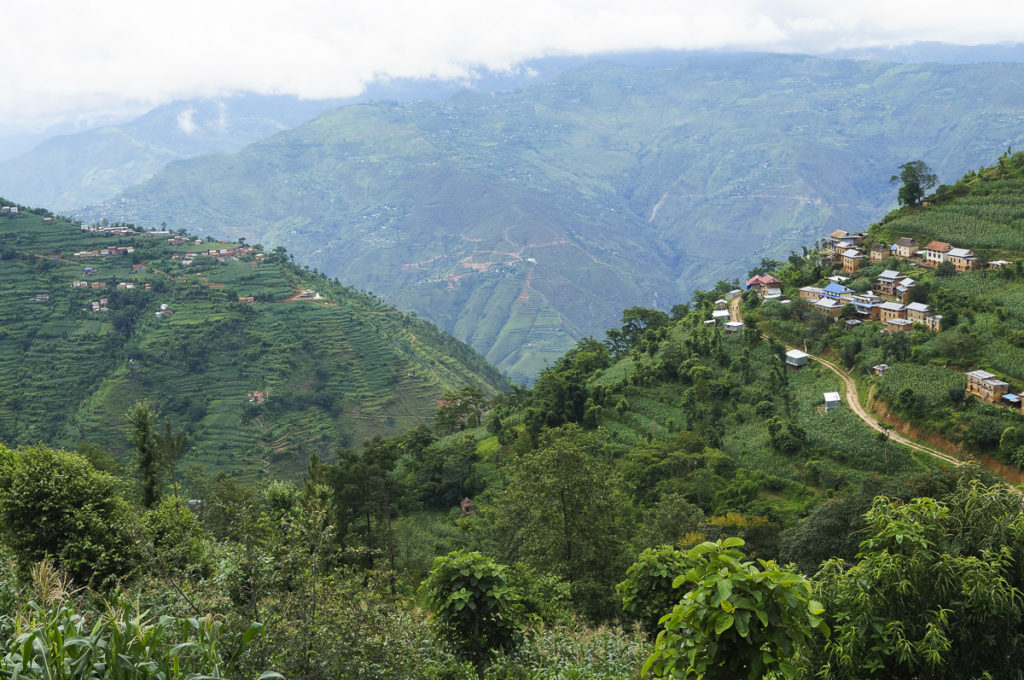 The village of Thulo Parsel is perched in the mountains of Nepal’s Timal region. Here, Bodhichitta trees produce a distinctive seed that is favored by Buddhists who use them as beads.

Prashanta Tamang, (far left in striped t-shirt), 28, sits with his family. The family owns Bodhichitta trees and earns a good living by selling their seeds. The family has saved enough money to buy land and build a home in the Kathmandu valley. 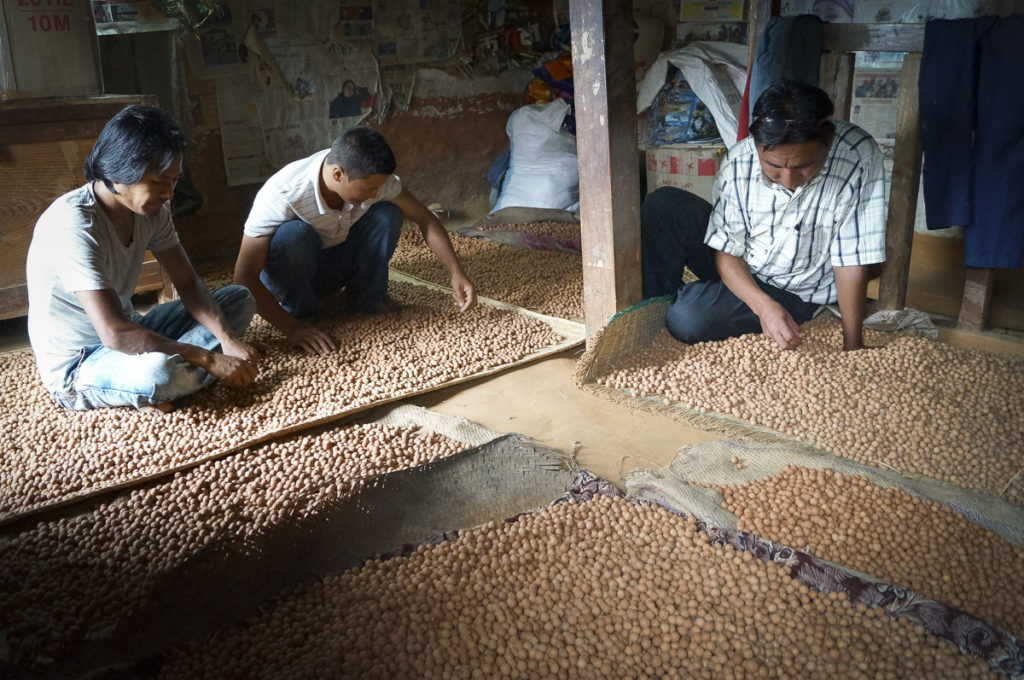 From left to right, Bikash Tamang, 38, Prashanta Tamang, 28, and Ajay Lama, 35, tend to Bodhichitta beads, turning them by hand as they dry. 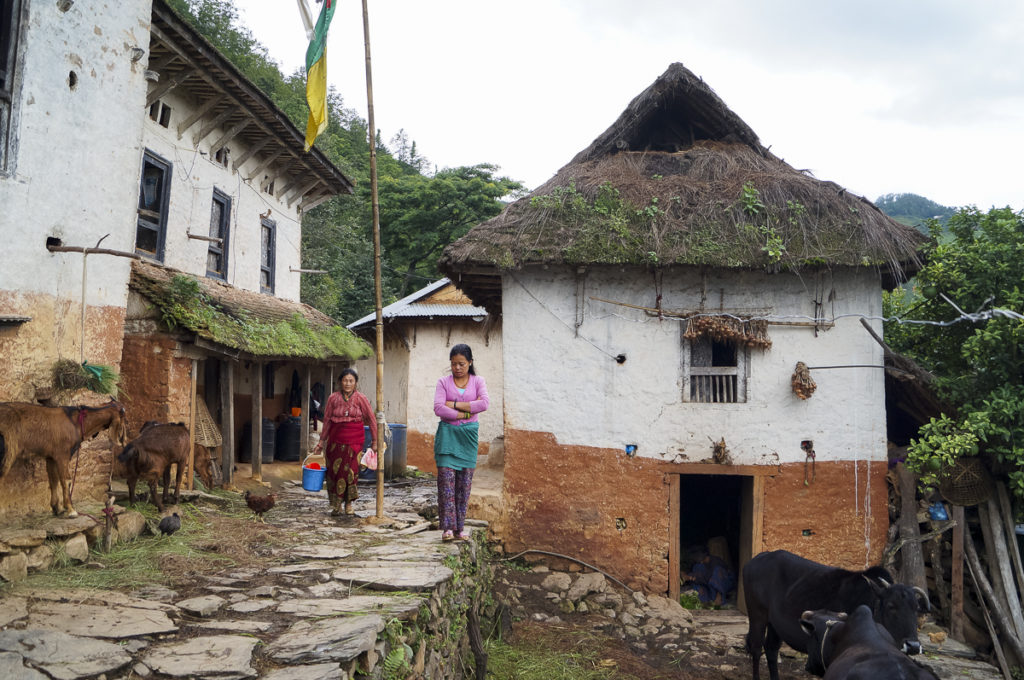 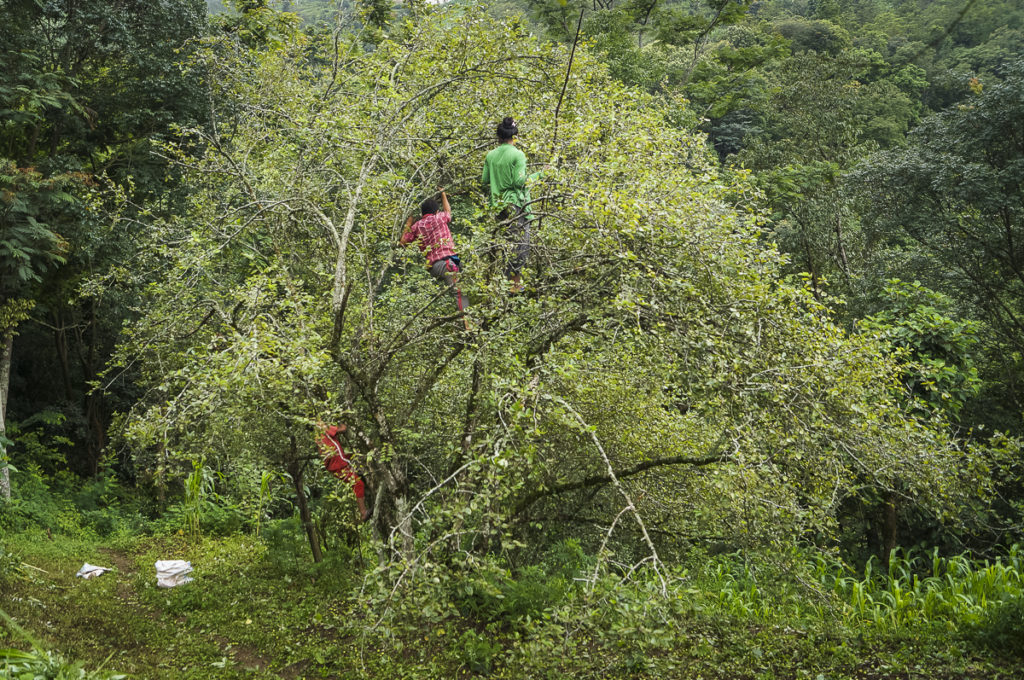 Young men climb Bodhichitta trees to harvest their seeds. Maintenance of the trees is done by hand. 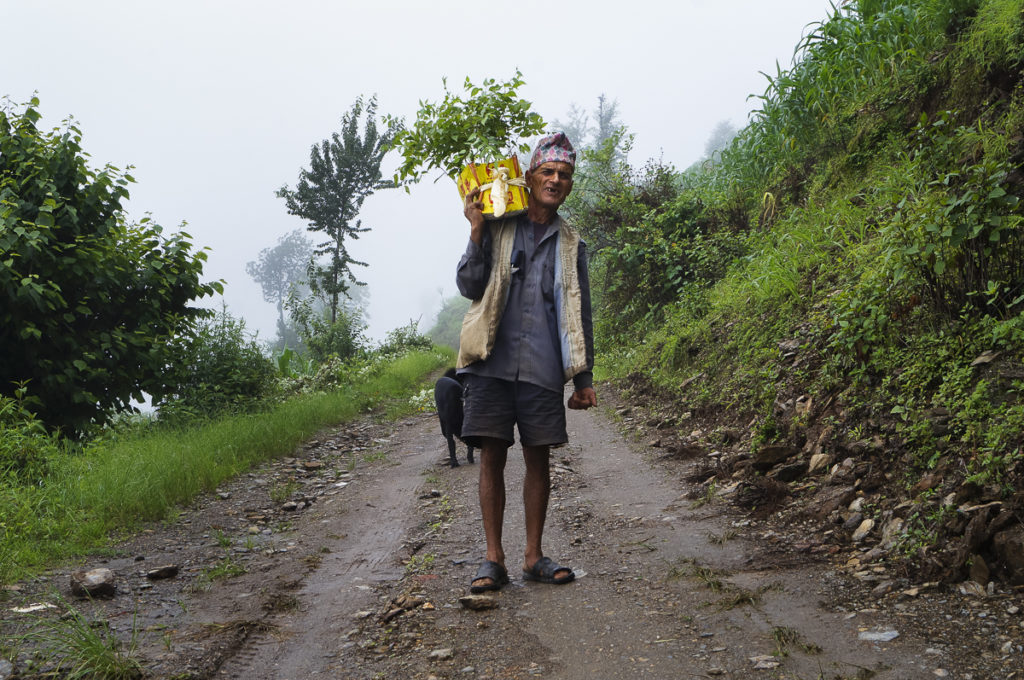 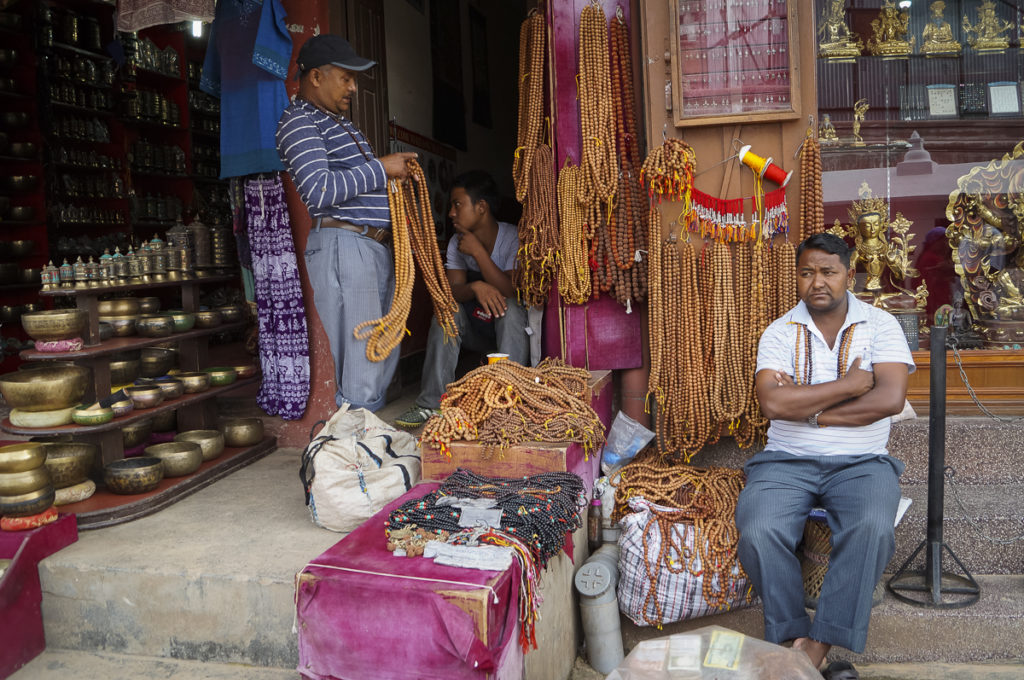 A shop at Kathmandu’s Swayambhunath temple sells Bodhichitta beads, which are especially popular among foreigners. 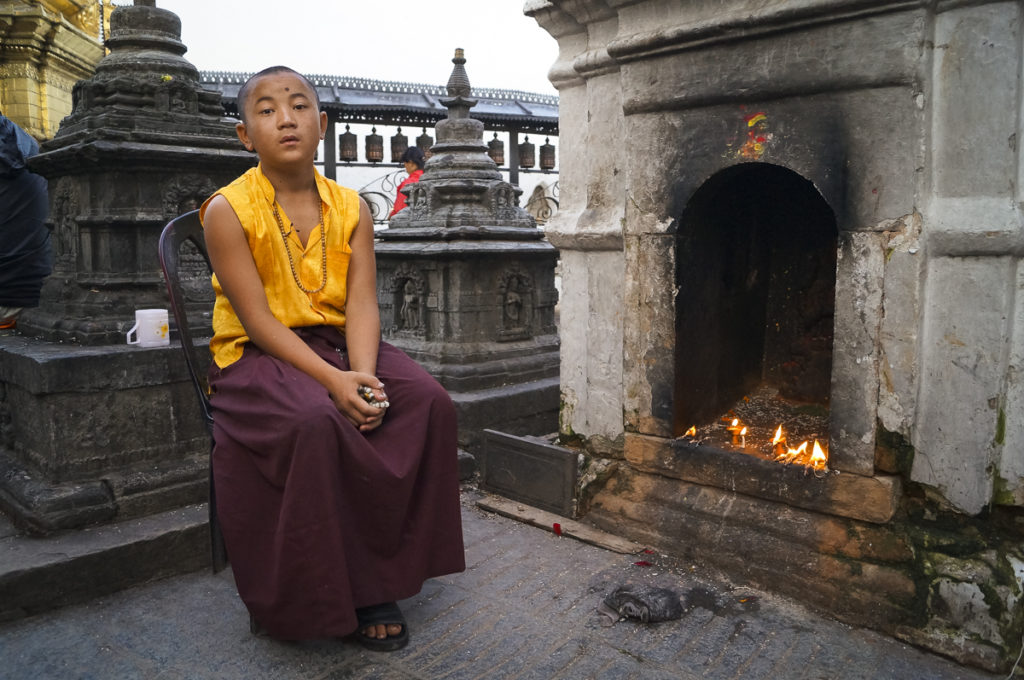 A young monk sits at Swayambhunath temple in Kathmandu. Bodhichitta beads from Nepal’s Timal region, which are used in Buddhist meditation chants, became popular after the Dalai Lama, the Buddhist spiritual leader, noted their quality.

The trees grew in the wild and were often found in monastery gardens and jungles, Sonam Lama says. Villagers often ate the fruit, but they couldn’t consume it all.

“Most of the fruits would go [to] waste as compost in the farmland,” he says.

All that changed in the late 1990s, when Buddhists began to use the beads for chanting and they became a fashionable way to show off wealth, he says.

In some cases, the beads are used in necklaces, bangles or bracelets.

They were uncertain of why this trend began or how long it would last, but the villagers in Nepal who grow Bodhichitta trees embraced it. The trees that once grew wild are now cultivated and protected as a valuable cash crop.

Villagers in Singata used to grow their own food, Sonam Lama says, but now they focus on growing Bodhichitta trees on a commercial scale. The tree’s fruit have brought so much income to the village that people there have pooled their money to build roads and other infrastructure.

But the money has also brought division.

Keshari Maya Tamang, 56, runs a tea shop in the village of Timal. In 2014, the village organized a lottery for her family to divide its property, including ownership of four Bodhichitta trees. The lottery was intended to settle a family feud. But Tamang didn’t win any trees. Her son won two.

“Having a tree could have been a source of easy livelihood for me in my old age,” she says.

Some families in the Timal area makes at least 300,000 rupees (about $2,800) a month between April and July every year from leasing their trees or selling the beads, says Hira Bahadur Tamang, a villager. (Hira Bahadur Tamang is not related to Keshari Maya Tamang.)

Ajay Lama says he returned to Nepal from South Korea, where he was working, in 2012 to go into the Bodhichitta beads business in his village.

He earns around 400,000 rupees (about $3,760) each season by selling sacks of beads, he says. He won’t say how many sacks he’s sold, but he adds that he’s earned enough money to buy land and build a house in Kirtipur, a suburb of Kathmandu.

But the Bodhichitta boom may be coming to an end. The beads are durable and are often passed from one generation to the next, says Pushpa Raj Pudasaini, a bead trader in Kathmandu.

He expects the demand for new beads to slow unless the market widens into countries beyond Asia. Even now, he says, prices are far less than they were just a few years ago. A chain of beads that might have sold for 200,000 rupees (about $1,880) in previous years now goes for around 80,000 rupees (about $750), he says.

Until last year, Pudasaini says he earned around 500,000 rupees (about $4,700) seasonally from selling around 2,500 kilograms (about 5,500 pounds) of beads. Now, he only supplies beads based on orders he receives, and they do not amount to much, he says.

“If the exports fall because of higher production, we wouldn’t get any price for the Bodhichitta beads after about four years,” Pudasaini says.

The end of this lucrative era could be hastened by a recently-enforced tax.

Buyers who purchase the beads from growers must pay 1.04 rupees (about 1 cent) per kilogram of beads, says Prem Raj Niraula, a non-gazetted second class officer at the District Forest Office of Kavrepalanchowk.

Villagers say the tax, combined with the drop in demand, has threatened their investments in tree farming.

“If the government fails to promote the Nepali beads across the world, then our business will go down day by day,” says Prashanta Tamang who built a business trading beads in Singata. “Then we will have no option but to go back to our farms and grow rice for our living.”