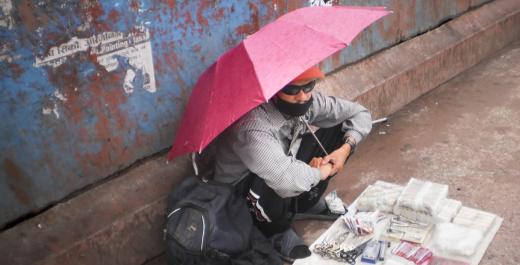 KATHMANDU, NEPAL – Amrita Thapa, 23, says she is both nervous and excited to vote in the coming election in November to elect a new Constituent Assembly. But Thapa is blind, which she fears will hinder her ability to participate in the democratic process.

For the past five years, Thapa has lived in Bhaktapur, a district in central Nepal neighboring Kathmandu, the nation’s capital. But Nepalese law requires her to travel to her home district, Jumla, in the country’s remote northwest, to cast her ballot because she has not obtained permanent migration status in Bhaktapur.

“I really want to vote and elect the representative of my choice,” Thapa says. “However, I am worried that I may be deprived of this opportunity.”

The three-day journey also is physically demanding, requiring three flights and then the bus ride. The final leg of the journey involves a 14-kilometer (8.7-mile) mountainous trek to reach her parents’ home. The walk would require her to hire an aide, which would be difficult to find, she says.

“Under this situation, it is hard [to] travel and exercise my vote,” she says.

But her vote is crucial to electing a candidate who would defend the rights of disabled people in the government, Thapa says.

“My one vote may be valuable enough to get the right politician to advocate for the rights of and benefits to the disabled people like me,” Thapa says.

Thapa’s friends who are visually impaired and hail from the remote Himalayan districts of Humla and Mustang also say they want to cast their votes to have voices as citizens.

“We have experienced tough hardships as visually impaired persons in everyday life,” she says. “While walking on the streets, some rude persons break our white guiding sticks, vehicle drivers disregard us, people laugh at us on stumbling down in the streets to hurt our self-confidence, people tease and humiliate us, and we are denied rental rooms because we supposedly are dirty. We get splashed with muddy water by the moving vehicles in the rainy season. We have put up with such problems quite often.”

They want to vote for a candidate that will advocate for their rights.

“If we get a chance to vote for a good candidate, he or she can understand our issues and problems and advocate for our rights,” Thapa says.

In Nepal, more than 513,300 people live with a physical disability, according to Nepal’s 2011 National Population and Housing Census. People who are blind and visually impaired constitute 18.5 percent of the physically disabled population.

Since Nepal’s civil war ended in 2006, political chaos has plagued the nation. In April 2008, citizens elected 601 representatives to the Constituent Assembly to write a new constitution within two years. The assembly abolished the monarchy and declared Nepal a federal democratic republic. But it was unable to complete the constitution in time or within the two-year extension, so the government dissolved it in May 2012. A presidential ordinance formed a neutral, nonpolitical government with the goal of conducting a new general election on Nov. 19, 2013.

In the coming election, all major political parties are vying for a majority of seats in the assembly. People throughout the country say this is a high-stakes election that they hope will bring an end to the political instability that has defined Nepal since the civil war began in 1996.

The country’s 2007 interim constitution guarantees every citizen the freedom to vote for the representative of one’s choice.

But Nepalese law also requires people to vote in their home districts, unless they can prove permanent migration to another part of the country, says Bir Bahadur Rai, spokesman and joint secretary for the Election Commission of Nepal, a constitutional body with the mandate to supervise and to direct all elections of the Constituent Assembly. To prove permanent migration, a person needs a migration certificate, citizenship, and recommendations from their village development committee and district development committee governmental offices.

But citizens who move to Kathmandu tend to keep their original addresses because there are certain benefits for people coming from the villages, such as scholarships.

Blind and visually impaired people face more obstacles to voting than citizens with vision do, says Prakash Ghimire, a program officer at the Nepal Association for the Welfare of the Blind, a nonprofit rehabilitation organization.

Ramesh Kumar Paudel, training co-coordinator at the Himalayan Human Rights Monitors, a nongovernmental organization committed to defending the rights of the poor and marginalized communities in the Himalayan region, summarizes these challenges.

“Difficult geography, financial and other practical problems have deprived the visually impaired people [of the right] to vote,” he says.

Resham Baram, 30, lives in Boudha – also known as Boudhanath – a neighborhood in Kathmandu. His parents took him to Kathmandu and India for treatment after his vision started to diminish 17 years ago, but doctors told him that it was incurable. Eventually, he became blind.

Visually impaired people have to face adverse living environments, he says. Many struggle to earn a meager living vending goods on the street, where people mistreat them and they have to weather dust and smoke.

Baram sells household goods such as nail cutters, toothpicks, hair combs and camphor balls from the side of an overhead bridge and earns about 100 rupees ($1) per day. Local police seize his goods when they catch him selling in the streets because street vending is illegal in most parts of Kathmandu, he says.

“Utter apathy of the past governments forced us into the streets,” he says. “We now feel, however, that if an honest politician is voted, he or she may initiate actions to help us because we think that good leaders will act in our favor. But we may not have the chance to vote.”

Because Baram does not have permanent migration status in Kathmandu, he would have to vote in his home district, Gorkha, in western Nepal. But the road to his home district is unpaved and in poor condition. Only a few buses leave Kathmandu for Gorkha every day, and a one-way trip takes six to seven hours.

He also cannot afford the bus fare with his meager earnings, he says. A round-trip costs 3,000 rupees ($30).

In addition to the geographic and financial challenges to make it home, additional obstacles await at the polls.

But Rai, also from the election commission, says that Braille ballots will not be available this year because of time and money constraints.

Braille ballots were also not available for the 2008 elections, Paudel says.

Agni Sapkota, a central committee member and spokesman of the Communist Party of Nepal (Maoist), says the party is advocating for greater voting rights for the disabled here by lobbying the election commission to offer Braille ballots.

Even if Braille ballots were available, though, the majority of visually impaired people cannot use them. In Nepal, 65 percent of people with visual impairments are illiterate and cannot use Braille, Ghimire says.

Uprety suggests that blind and visually impaired people find trusted aides to cast their votes on their behalf.

But there are no regulations in place that determine who is eligible to cast a vote on behalf of a blind voter, Rai says.

Baram, who has voted twice before, including in the last Constituent Assembly election in 2008, says members of various political parties have intimidated him into voting for their candidates when he has relied on others to cast his vote in the past. He no longer trusts anyone to vote for him.

Patali Budhathoki says she cast a vote on behalf of her blind son, Mangal Bahadur Budhathoki, according to his wishes in the 2008 Constituent Assembly election. He says he would not trust anyone else to cast his vote because he would worry whether the person would cast it honestly.

It is illegal to miscast votes on behalf of blind or visually impaired people, Rai says. But he also acknowledges that there is no mechanism in place to check the accuracy of these votes.

Mangal Bahadur Budhathoki, who is also president of the Illiterate Blind Art Center, a nongovernmental organization that works to uphold the rights of visually impaired people, asks the government to provide them with a private ballot system. He envisions a system through which people can cast their votes either tactilely or auditorily. It would be best if there were an electronic voting system, he says, but if not, there should be a separate room for blind people to cast their votes.

Nar Bahadur Limbu, president of Nepal Association of the Blind, a nonprofit, nongovernmental organization that aims to empower blind and partially sighted people, says that modern technology offers a solution.

“In the modern times, information technology and the computers could help the visually impaired people to cast votes secretly,” he says. “Right to privacy in this regard should not at all be violated.”

In the coming election, voters who are blind or visually impaired will have to rely on someone else to cast their vote, Uprety says.

Until an electronic system is in place, Rai recommends voting through the help of a confidant or an election officer.

But even if the commission installs an electronic system in future elections, voters would still need to travel to their home districts to vote, Uprety says.

The government should provide bus fares for blind and visually impaired citizens so they can cast their votes, Mangal Bahadur Budhathoki says.

Thakur Gaire, the central committee member of the Communist Party of Nepal-Unified Marxist Leninist, a political party in Nepal, is one of several politicians demanding new voting facilities that are disability-friendly. Gaire is also advocating for transportation for the disabled to and from polling booths, he says in a phone interview.

“We demand that the disabled voters, and the blind specifically, should be given transport facility exclusively to reach the polling booths and back and the booths should be disabled-friendly,” he says.

The government has not offered bus fares to people with visual impairments and has no plan to do so in the near future, Rai says. They will not, however, be subject to restrictions, such as using private vehicles, which the government otherwise forbids for security reasons on voting days.

Himalayan Human Rights Monitors plans to observe the ability of blind and visually impaired citizens to vote in the November election.

“As we work for the human rights, we continuously remind the government about the rights of the visually impaired and the disabled people,” Paudel says. “We are planning to observe and check if eligible voters can use their voting rights in the forthcoming election.”

Voting is an essential human right, he says.

“When these people get to vote, they can have a sense of pride, satisfaction and self-respect,” Paudel says.

Amrita Thapa is not related to Anu Thapa.