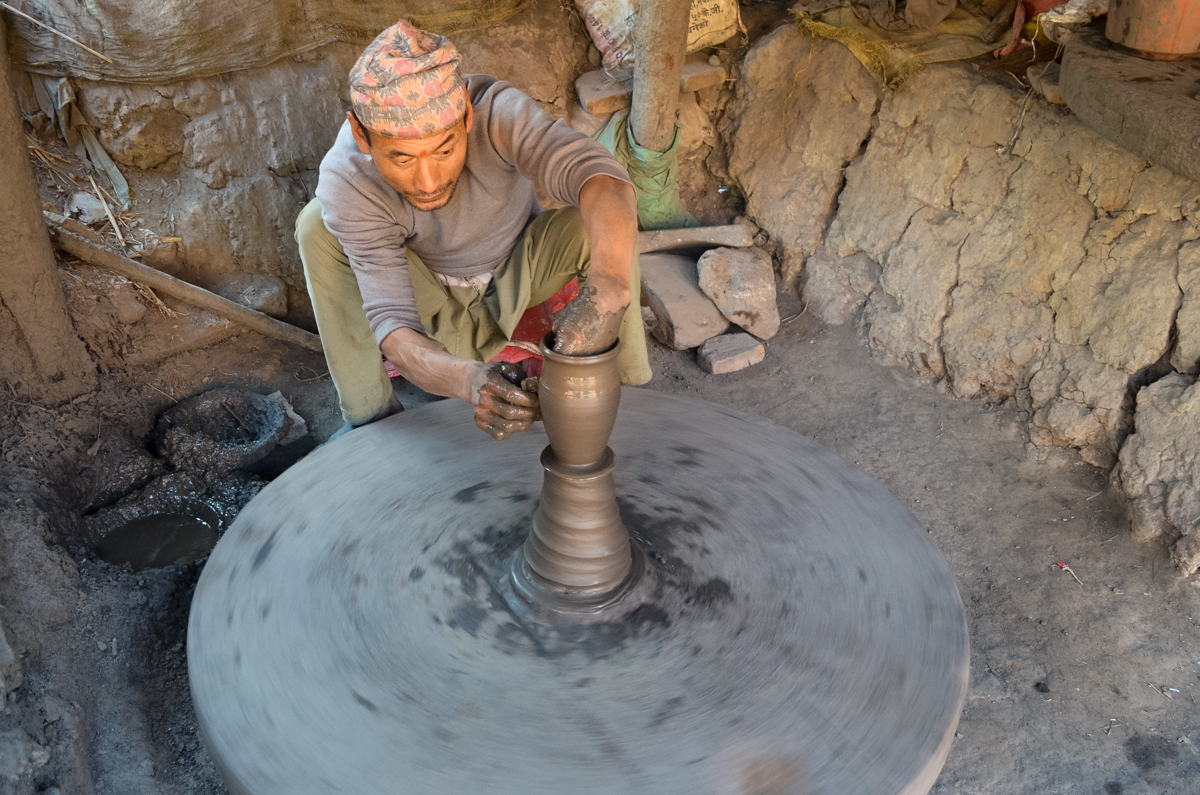 BHAKTAPUR, NEPAL – Bishnu Prasad Prajapati, 50, takes a handful of black clay from a pile on the floor, places it in the center of his potter’s wheel and begins to spin it. Within minutes, he expertly shapes the clay into a small pot that will be dried in the sun for a day until the clay turns a soft gray. He will then load his dried pots onto the straw-lined floor of a kiln to be fired.

Making ceramic goods is hard work, says Prajapati, who has been making cooking stoves, water vessels, pans, pots, piggy banks and lamps for about 30 years. He works from a corner of Talakwa Tole (“Pottery Square”), one of two pottery districts in Bhaktapur, an ancient city in the Kathmandu Valley.

Prajapati’s income has dwindled over the years as consumers have acquired a preference for cheaper and more durable plastic, steel and aluminum household goods.

When he entered the trade, Prajapati sold about 2,000 products a month, he says. Sales began to decline about 15 years ago, and recent years have been disastrous. Six years ago, he sold around 1,000 items a month; now he sells 500 products in a good month.

“Now in my old age I cannot change my profession,” he says. “And I have no other skills in my hands except making earthen pots.”

His production expenses also have gone up. Until about six years ago, he dug his own clay from ample reserves in empty fields. Now that buildings occupy those lands, he must buy clay. He spends about 5,000 rupees ($50) a month on clay, dye, wood to fire his oven, and straw to line it.

The dual hardship of diminishing sales and rising costs has impoverished Prajapati and his five family members.

“It is difficult to earn two meals a day selling earthen pots,” he says.

Prajapati comes from a long line of potters. When his grandfather headed the family, everyone made pottery. But today, Prajapati is the only member of his family who still throws pots.

In his family, as in many other families in his caste, young people are seeking better-paying vocations. Most potters have stopped making certain traditional clay items, such as vessels for cooking rice, that are no longer in demand, he says.

Because younger potters do not know how to make these items, Prajapati fears they will become extinct.

Pottery in Nepal is traditionally the domain of the Kumal caste, whose members share Prajapati’s surname and live primarily in the Bhaktapur area.

But there is yet potential for the pottery industry if the government and nongovernmental organizations will provide mediation and marketing assistance, some researchers say.

Pottery has been part of Nepalese culture from prehistoric times, says Binod Ghimire, director of the Social Science Study Center in Bhaktapur and author of “Pottery Industry and Its Prospects, with Reference to Nepal.”

There are more than 121,000 people of the Kumal caste in Nepal, which represents less than 1 percent of the country’s population, according to the National Population and Housing Census 2011. As of the year of the census, almost 85 percent of them lived in rural areas.

Fifteen years ago, at least 80 percent of the families in Talakwa Tole had at least one family member working in the industry, Ram Bahadur Prajapati estimates. That figure has dropped to 12 percent this year.

“Although our identity is in making earthen utensils, the decrease in sales during the past few years has compelled the new generation to look for alternatives, such as foreign employment and other occupations,” he says.

Only three of the potters working in Talakwa Tole today are under 20, he says.

Love of the craft isn’t enough to keep potters at the wheel when their bellies are grumbling. In 2014, eight Talakwa Tole potters left the industry to work as bus drivers or day laborers, he says.

Mahesh Prajapati, 30, worked as a potter for three years before giving it up in 2012. He now works as a bus driver in Kathmandu, Nepal’s capital, 20 kilometers (12.4 miles) from Bhaktapur.

He wanted to follow in the footsteps of his 59-year-old father and previous generations of his family, but the income was insufficient to support his family of eight, he says.

Bishnu Prasad Prajapati’s brothers and cousins have all left the industry. His children are not interested in pottery; his older son hopes to migrate to Malaysia to work as a taxi driver.

He fears he is a part of a dying trade.

“Seven or eight years from now, we might see earthen pots only in museums,” he says.

If the Kumal community stops making pottery, Nepalese of all religions will lose out, Ghimire says.

The Kumal community’s pottery is widely used in Hindu and Buddhist rituals, making it an integral part of Nepalese culture, he says.

Members of the Newar community use earthen pots in funeral rituals, he says. Furthermore, wheatgrass grown in earthen pots plays a significant role in Dashain, one of Nepal’s biggest religious and cultural festivals. Clay lamps, considered sacred and pure, are lit at celebrations and commemorations.

But for everyday use, clay products have become impractical, consumers say.

Gita Shrestha, 33, a housewife in Bhaktapur, has never bought clay cooking pots. The only pottery in her kitchen was a wedding gift from her in-laws.

“Steel and plastic utensils are cheaper than the earthen ones,” she says. “They are light to carry, durable and cheap. That is why everyone likes it.”

Shopkeepers have adapted to the decline in pottery sales.

“When I started the shop, I sold only clay pots,” says Sumit Manadhar, who has owned a household products shop in the Jamal area of Kathmandu for 35 years. “But today my shop is full with plastic, aluminum and steel utensils.”

Throughout most of the year, only three or four of the 500 customers who visit the shop each month buy pottery, he says. However, during local festivals, the number of people buying clay pots and oil lamps shoots up to about 200.

Price is the main factor in the drop in demand for pottery, he says. A clay pan for making chapatti – a locally made bread – sells for 300 rupees ($3), while a steel pan costs only 200 rupees ($2).

But even when the cost is the same, customers usually choose plastic or steel because they are more durable, he says. Pottery breaks.

The plastic, steel and aluminum industries in Nepal have grown rapidly in recent years, says Pramila Rijal, section officer at the Department of Cottage and Small Industries of the Ministry of Industry.

Nonetheless Ghimire believes the pottery industry still has huge potential. In doing research for his 2013 book, he learned that the “near-extinction of pottery” stems from a lack of skilled manpower and raw material, he says.

Like Bishnu Prasad Prajapati, many potters are losing access to fields where they used to obtain clay. To preserve the potters’ livelihood, the government should ban development on land with extensive clay deposits, he says.

In addition, potters must expand their market geographically, Ghimire says. Pottery production and sales are concentrated in Kathamandu, Lalitpur and Bhaktapur. The industry could employ more people if there were more production sites with greater access to clay.

“It is impossible to develop this sector without the help of the government,” he says. “The government can play the major role in promoting this profession among the young generation.”

Ghimire also thinks potters, like makers of aluminum and plastic products, should update their designs.

“Pottery making is also a form of art,” he says. “Designing a unique piece and extending it to the wider world can also support the economy of the country.”

Government officials say they do support the industry.

The Department of Cottage and Small Industries started the Ceramic Promotion Program in 1984 to train potters, says Samsher Prajapati, a trainer in the program. It advises potters and offers courses of study that range in length from three to 15 months.

The department has trained 60 people to date, though only about 40 percent of trainees go on to work full-time as potters, he estimates.

“Through the training, people who want to learn are given an opportunity to learn,” Samsher Prajapati says. “This helps to conserve this traditional occupation.”

Kapil Dangol, joint secretary of the Ministry of Land Reform and Management’s administrative division, which implements government polices related to land use, says it has never received a request from the Kumal community to provide a protected source of free clay.

If such a request is made, the ministry can begin to address this need and provide a solution, Dangol says. The ministry cannot act arbitrarily.

“We cannot suddenly ask people not to construct buildings in the area where Kumals get the clay because there is currently no legal provision regarding it,” he says.

It will build a kiln that produces less smoke than the ovens that area potters now use. It will replace the potters’ huts with more permanent structures and clean up the wood and straw littering the square.

On the ground floor of the Kumal community house, the society operates a restaurant that serves Newari cuisine. On the second floor, the society plans to open a living museum where artisans will throw pots and let visitors try their hand at the craft, Ram Bahadur Prajapati says.

In May, the society will hold its first training session specifically for young people.

“We are making these plans to preserve the Kumal profession from extinction,” Ram Bahadur Prajapati says.